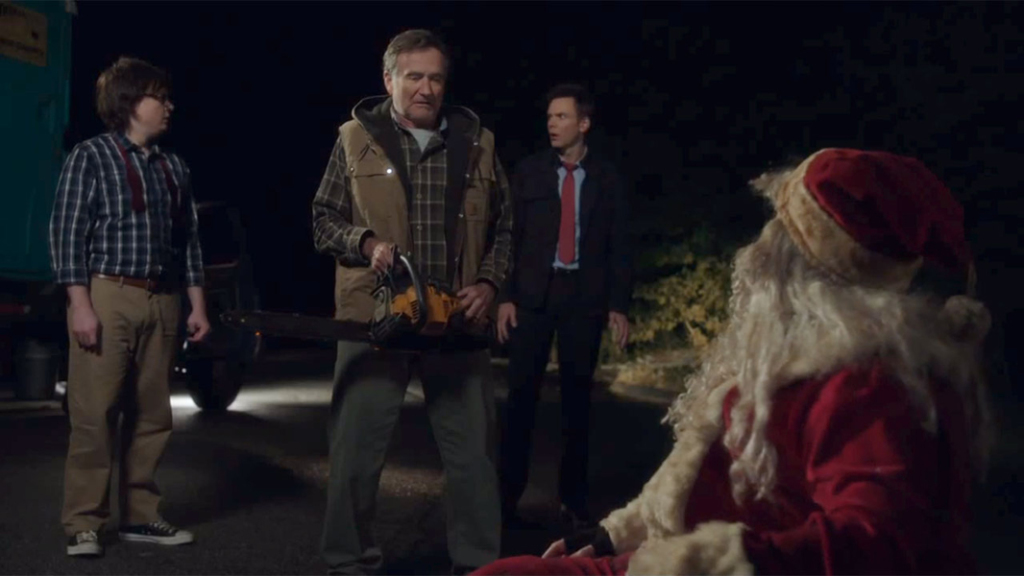 The best thing about “A Merry Friggin’ Christmas” is that it’s in severely limited release and I didn’t have to leave my house to see it thanks to my cable company’s on-demand library. Unfortunately, I still paid to see it.

The movie stars Community‘s Joel McHale as Boyd Mitchler, a successful hedge fund manager living the dream: he has a beautiful home, a sexy, loving wife in Luann (Lauren Graham, playing nearly the exact same role she played in Bad Santa), and two kids, Vera (Bebe Wood) and Doug (Pierce Gagnon). Because he grew up with an alcoholic and verbally abusive father, Boyd is one of those parents who does his absolute best to provide a loving environment for his family and works, exhaustively, to shield them from the horrible, cynical outside world. This has mostly worked. While Vera is more world-wise than she should be for her age, Doug is still innocent and doe-eyed and, wouldn’t ya’ know it, he still believes in Santa Claus.

Out of nowhere, Boyd’s idiot brother Nelson (Clark Duke) phones him up in the middle of the night to divulge the fact that he’s now a father — and the baptism is taking place on Christmas Eve. Best laid plans be damned, this will eventually put Boyd face to face with his father Mitch (Robin Williams) who has grown even more abrasive than he was when Boyd was young. Reluctantly, Boyd packs his family in the car as they go home to Wisconsin. In record time, Mitch rubs his son the wrong way and Boyd is ready to go home. Seeing a potentially explosive situation, both Luann and Mitch’s long-suffering and enabling wife, Donna (Candice Bergen) do their best to smooth things over in order to get Boyd to stay which he does, much to his chagrin.

Unknowingly, Boyd’s problems are only beginning: he’s unwittingly left his son’s big gift back in Chicago and if he doesn’t have it under the Wisconsin family Christmas tree in the morning, Doug’s entire belief in Santa, which was in already in jeopardy after Doug bumped into a drunken, deadbeat Santa (Oliver Platt) at one of those cheesy “Christmas Village” places you see along the highway, will cease to exist. Or something like that. On top of that, Boyd’s SUV breaks down, forcing his father to pick him up and drive him to Chicago instead. Also, Nelson’s along for the trip because he hid in one of Mitch’s port-a-pottys (it’s Mitch’s trade) when he blacked out due to PTSD stemming from an argument at the family dinner table.

I know it shouldn’t be possible, but the movie gets even worse. How? I don’t really care to elaborate.

“Bourbon is where Santa gets his energy,” “Santa” explains to little Doug, who is horrified to see his childhood hero getting piss drunk in front of him without a care in the world. The scene is as disturbing, horrifying and unfunny as it sounds.

Did you want me to go on? Yeah, I didn’t think so.

If 1989’s “Christmas Vacation” is the ultimate portrayal of the American Family Christmas gone horribly awry, then this would be the movie that goes deep under its surface, exposing the dark familial baggage that the late John Hughes wisely decided not to subject his audience to. I realize, in typing that, I might have carelessly insinuated that Hughes was involved, in some manner, in the making of this train wreck. That’s patently false. I apologize. The mere association of Hughes to this crap is incredibly cheap of me and crass to boot. Still, he might be laughing at me right now. I can’t honestly be sure. Anyhow, I wish I could speak well of Robin Williams here. It really wouldn’t be fair of me to grade his performance as it’s just Robin Williams doing a half-assed imitation of a grizzled, small-town Conservative yokel and it mostly feels like he was probably only doing this for the paycheck up until his untimely death. I know all this is depressing as hell to think about but, honestly, the movie is so boring, insipid and unfunny, there’s really not much else to do but think of something other than this movie.

The movie is helmed by Tristam Shapeero who should be used to this kind of thing by now being that he’s worked with McHale on Community. Frustratingly, he’s been paired with first-time screenwriter, Michael Brown, who enters into the anti-Christmas movie sub-genre on the coattails of other, better films within that realm, with the idea that what he’s presenting is razor-sharp. Unfortunately, Brown brings a Spork to a gunfight and the movie suffers as a result, starting black as coal, continuing that way while blotting out any comic relief with terrible (and, at times, confusingly arbitrary) situations and characters which, in turn, gives us nobody to root for or sympathize with. It’s really sad, considering the level of talent involved.