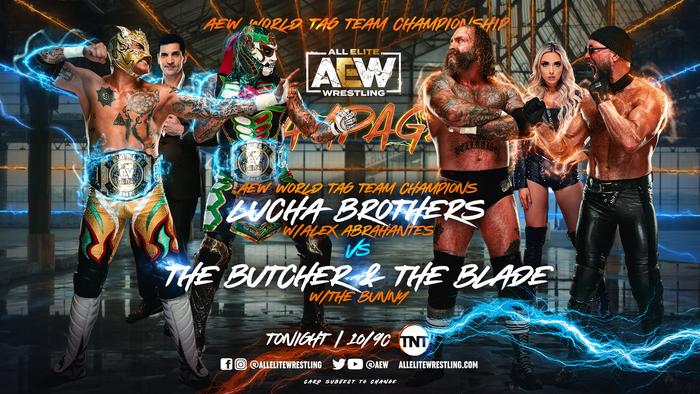 It’s another stacked show this week with a pair of title matches. First up we have Butcher and the Blade getting a shot at the Lucha Bros, plus Miro defending the TNT Title against Fuego del Sol. The latter is made a little more interesting when you throw in del Sol’s car being on the line as well. Let’s get to it.

Here is Dynamite if you need a recap.

Tag Team Titles: Butcher And The Blade vs. Lucha Bros

The Bros are defending and Butcher throws Fenix around to start. Penta comes in to take over on Butcher, including the wheelbarrow splash for two. Butcher forearms Penta in the face so Fenix comes in, only to get kneed in the face. It’s already back to Penta for the Sling Blades to the floor, setting up the big dives from the champs.

We take a break and come back with Penta having to crawl over for the tag to Fenix, who strikes away at Butcher and Blade. Butcher breaks up something off the top rope so Fenix German suplexes him instead. A moonsault set up another German suplex for two on Blade, followed by the spike Fear Factor to Butcher.

Blade has to make the save so Penta kicks away at his legs. A powerslam gives Blade two as everything breaks down. Penta gets tied into the corner by the mask, leaving Fenix to get double stomped. With the powerbomb/neckbreaker loaded up, Penta takes his mask off to make the superkick save. Fenix grabs a hurricanrana to retain the titles at 9:43.

Rating: B-. Butcher and the Blade aren’t exactly top level challengers but they did just fine for a one off like this. They haven’t exactly been back for very long but they are undefeated this year (with most of the wins coming on Dark) so putting them here works. I’m not sure they needed much of an explanation for their title shot, though AEW certainly likes keeping things official.

Post match the Hardy Family Office comes in for the beatdown but Santana and Ortiz run in for the save.

Kenny Omega talks about how Bryan Danielson has always been the underdog and he isn’t even ranked over here. Danielson says everyone is underestimating him but he wants to start against the best. The underdog is getting taken apart here, just like everyone else.

Anna Jay vs. The Bunny

Tay Conti and Penelope Ford are the seconds and it’s a brawl in the aisle to start. Anna gets the better of things and takes Bunny inside to run her over. Bunny gets knocked back outside, where she pulls Anna’s shoulder hard into the post. The arm is cranked on some more as we take a break. Back with Bunny cranking on the arm again but Anna kicks the knee out. A running seated Blockbuster gives Anna two but the Queenslayer is broken up. The seconds get in a fight on the floor and Anna grabs a rollup for the pin at 6:59.

Rating: C. This was hard hitting enough to get by, though Anna still has a long way to go in the ring. She does the limited stuff well though and that is better than some people can say. It’s a smart move to let her have the win here as she needs it a lot more than Bunny, though neither of these two seem likely to break through to the title picture in the near future.

Post match the brawl is on again with Conti and Ford getting involved as well. Ford pulls out some brass knuckles to knock Conti and Anna cold.

Post break, Matt Hardy is furious and makes Anna Jay vs. Penelope Ford, plus Lucha Bros/Proud and Powerful vs. Private Party/Butcher and the Blade for next week. For this week though, Hardy is sick of looking at an Orange Cassidy lookalike in the front row. The lookalike, who weighs about 300lbs, is pulled into the ring for a beatdown from Hardy and Jack Evans. Hardy pulls out some scissors and it’s time for the big haircut. Cue Orange Cassidy for the save.

Here are Ruby Soho and Britt Baker for a face to face chat. Britt thinks Riott is here for herself, because she needs to find out who she is. Ruby has changed her name and hair color so much because she needs to fit in. Everyone knows who Baker is around here though and we hit the crowd assisted catchphrase.

Ruby says of course everyone knows who Baker is because she tells them every week. Ruby knows who she is too, but now she has the freedom to show it. We pause for a RUBY SOHO chant before she wants to talk about Baker. Britt looks like every other broad she has stood across the ring from, even down to banging some dude in the back. Baker smiles a bit and nods as Ruby says she is trying to figure out if there is anything more.

Actually Baker would like to know the same thing, because Ruby was fired from the last place she worked. Ruby was fired, but it was the best thing that ever happened to her. She can’t believe Baker can see anything with her head so far up Tony Khan, but next week she won’t even be able to see herself as champion. Baker swings the belt and is chased off in a hurry. Good segment here with some great lines from both, but Soho really needs to win to not look like the flavor of the month.

We get the face to face interview with Fuego del Sol and Miro. Fuego is willing to put up his new car against the title, because he knows he can drop Miro on his head with the tornado DDT. Miro may be God’s Favorite Champion so he must have heard of David vs. Goliath. Miro talks about how he loves celebrating with his God above and his wife below, so he’ll retain the title.

Miro is defending. Fuego kicks away to start and sends Miro outside, only to have his dive pulled out of the air. A posting drops Miro though and Fuego does it again for a bonus. Another dive off the barricade is countered with a fall away slam though and we take a break. Back with Fuego fighting out of a bearhug but the tornado DDT doesn’t work. Instead it’s a pair of double stomps into a regular DDT to drop Miro. That’s too far for Miro, who unloads on Fuego in the corner. The jumping superkick gives Miro a new car at 8:55.

Rating: C. They had a tricky job here as there was no drama about who was winning here and they managed to turn it into something interesting. That is hard to pull off but Miro can do almost no wrong at this point. Fuego is a total underdog and tried his best, but it is going to take something special to beat Miro for the title.

Post match Miro takes the keys and puts them in Fuego’s mouth, setting up the Game Over. Sammy Guevara runs in for the save and picks up the title to end the show. Miro vs. Sammy works for me.

Overall Rating: C+. This was a different kind of Rampage as it felt like a missing hour of Dynamite. In this case, that is not a bad thing as they built up some stories before next week’s double shot of huge. It is still a very easy hour of wrestling to watch and the Soho vs. Baker promo was quite good. Another nice show here and that’s the norm so far with Rampage.

Remember to follow me on Twitter @kbreviews and head over to my Amazon author page with 30 different cheap wrestling books at:

Remember to check out Wrestlingrumors.net for all of your wrestling headline needs.