Time has been kind to the 1966 incarnation of Batman. Rather than viewing the series as an abomination, fans embraced it for what it was: a vivid, cheerful, comics-inspired version of the Caped Crusader. Warner Brothers released two animated movies continuing the adventures of the ’66 characters while The LEGO Batman Movie paid homage to the series on a few occasions. DC even runs a comic series dedicated to continuing that universe. Various TV shows, films, music videos, and other media have paid homage to the series.

So it was only a matter of time before we got a pinball machine to commemorate the series — and the timing couldn’t have been better.

In 2016, Stern Pinball released “Batman ’66” during the 50th anniversary of the series. And just like the series, it was all in, embracing the giddy goofiness the series offered viewers week after week. Every hero from Batman to Batgirl was included as was every single villain — including the one-offs like “Egghead”, “False Face” and “King Tut”. The game is insanely deep with plenty of missions and targets to shoot.

But like every single other Stern game, Batman ’66 ran on Stern’s SPIKE 2 hardware, meaning that the chances of a fully-realized and accurately-emulated virtual version for Visual Pinball were as likely as seeing Adam West dancing while wearing the Batsuit.

Enter VPX artist, “Daphishbowl” who burst upon the Virtual Pinball scene much like Clark Kent came into Metropolis, handing Perry White that famous “page one scoop” for The Daily Planet. Before his “Guardians of the Galaxy” table, the closest thing we had to a fairly modern (and accurate) SPIKE table was the infamous, reverse-engineered “Ghostbusters” table and the surprising “The Munsters”. “Guardians” was impressive precisely because it played much like the real table, included a gorgeous PUP pack, and came out of nowhere. The issue I had with it was that the flippers felt severely delayed and the physics weren’t great, which meant that, even if you aimed a shot, the ball would end up far from where you meant to shoot it, which was just aggravating. Also, it didn’t feel like the ball was actually really hitting physical objects because the audio didn’t really compliment what was going on, on the table. That said, it was an impressive table — especially since it was daphishbowl’s very first.

All the flaws present in GOTG are non-existent with this game.

“Batman ’66” also plays beautifully. The physics are perfect (drop catches and post-passes are insanely easy to pull off) and the shots end up precisely where you mean to put them — or, at the very least, near where you put them. Every shot here feels rewarding and the harder shots, even more so, when you aim correctly. The table’s nudge physics are also right on without being overbearing. 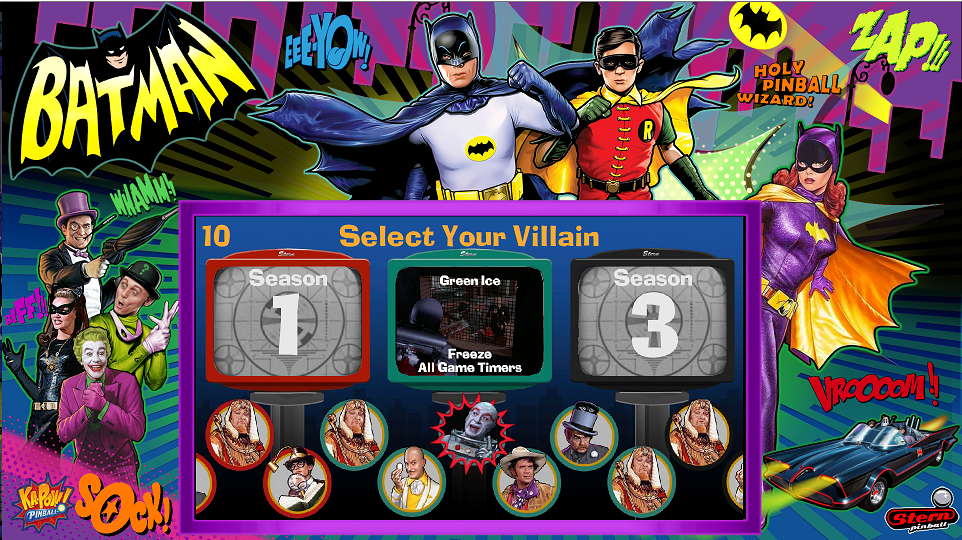 The thing that really sets this table apart from tables like “The Munsters” or “Total Nuclear Annihilation” is the accuracy. “Daphishbowl” utilized the talents of just about every single contributor out there including TerryRed, DJRobX, Nailbuster, and VPW and a few outsiders like MPT3K. The dedication shows. I haven’t fully tested it, but Batman ’66 appears to have every single mode and easter egg the real table has — and then some.

Unlike GOTG or The Munsters, just about all the dialogue and every musical cue and callout are present and accounted for. Better yet, they’re perfectly balanced so that music and dialogue are the same volume. You can actually hear the callouts over the music. The Pup Pack and action on the table are perfectly synced. The audio and video match every trigger, bumper, scoop, ramp, and orbit and nothing feels like something an amateur put together.

All of this is especially insane when you consider that this game doesn’t have a ROM file and runs directly off the game script. How much scripting exists for this game?

Over 27,000 lines of code were jammed into this sucker. And it shows.

Daphishbowl’s “Batman ’66” is proof that the most complex tables Stern puts out to its customers can be flawlessly replicated for virtual pin players.

It isn’t just another routine or quickie attempt at a Spike 2 table, it’s a revelation.