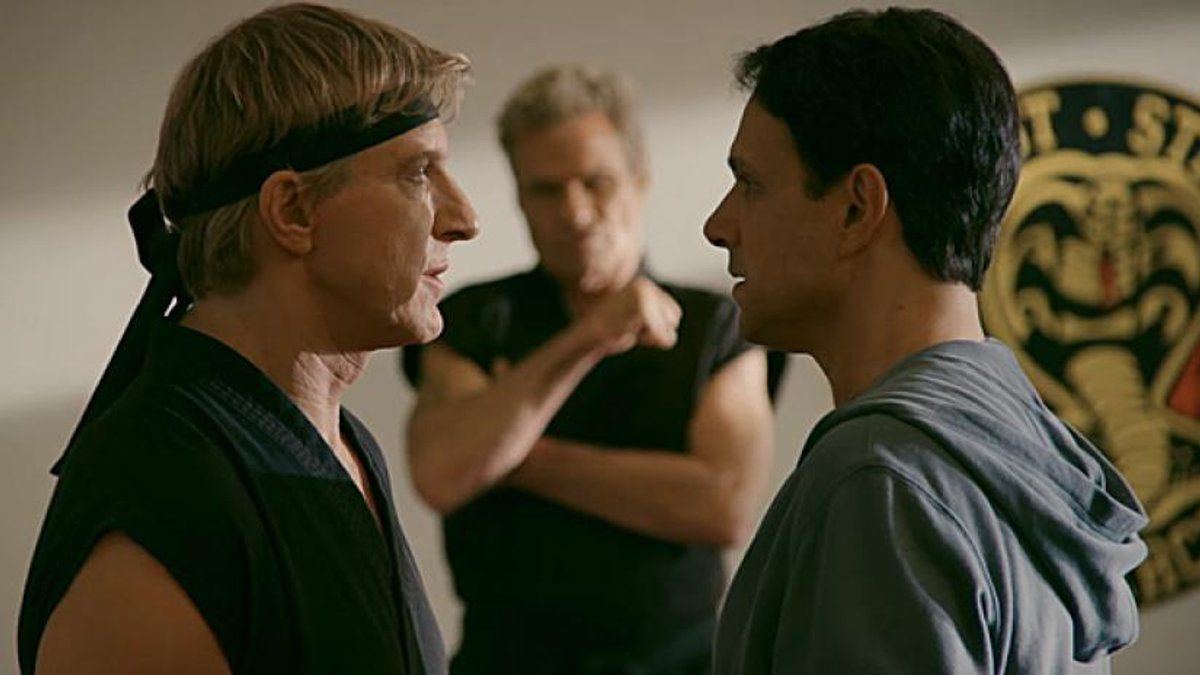 COBRA KAI
Season 2, Episode 5
“All In”
Available on YouTube Premium
GRADE: B+

As we’ve learned on this series, actions have dire consequences. Last episode, we found out that Kreese (Martin Kove) physically assaulted Demetri (Gianni Decenzo) and sent him away with a bloody nose. For most, revenge is a dish best served cold. But for Demetri, revenge is a dish served passive aggressively: he’s taken to the Internet and written a scathing Yelp review where he calls Johnny (William Zabka) and Kreese insane. And, also, that the facility is in need of a facelift despite looking “badass on the outside”. But, it’s that first part that haunts Demetri more than anything and raises the ire of his childhood friend, Eli, AKA “Hawk” (Jacob Bertrand). His eyes are cold and his jaw is clenched…but there’s something else there other than anger.

It runs in juxtaposition with the episode’s start: a flashback to Eli’s life prior to Cobra Kai. Eli’s mother is on the phone with his school to demand that they do something about the kids who bully him on a daily basis. And then there’s Eli, wearing an ugly sweater and slacks and a full head of hair with tears running down his face. She’s fire and brimstone until they tell her that they’ll make an anti-bullying announcement to the entire school — which, for Eli, is even worse because he’s the one who deals with the backlash and ridicule following a decision like that. Bertrand is outstanding here, portraying an emotionally scarred kid stuck in his own personal hell, which might resonate with many younger viewers whose parents, as well-meaning as they are, cannot possibly comprehend what their children might go through at the hands of cruel kids on a daily basis. 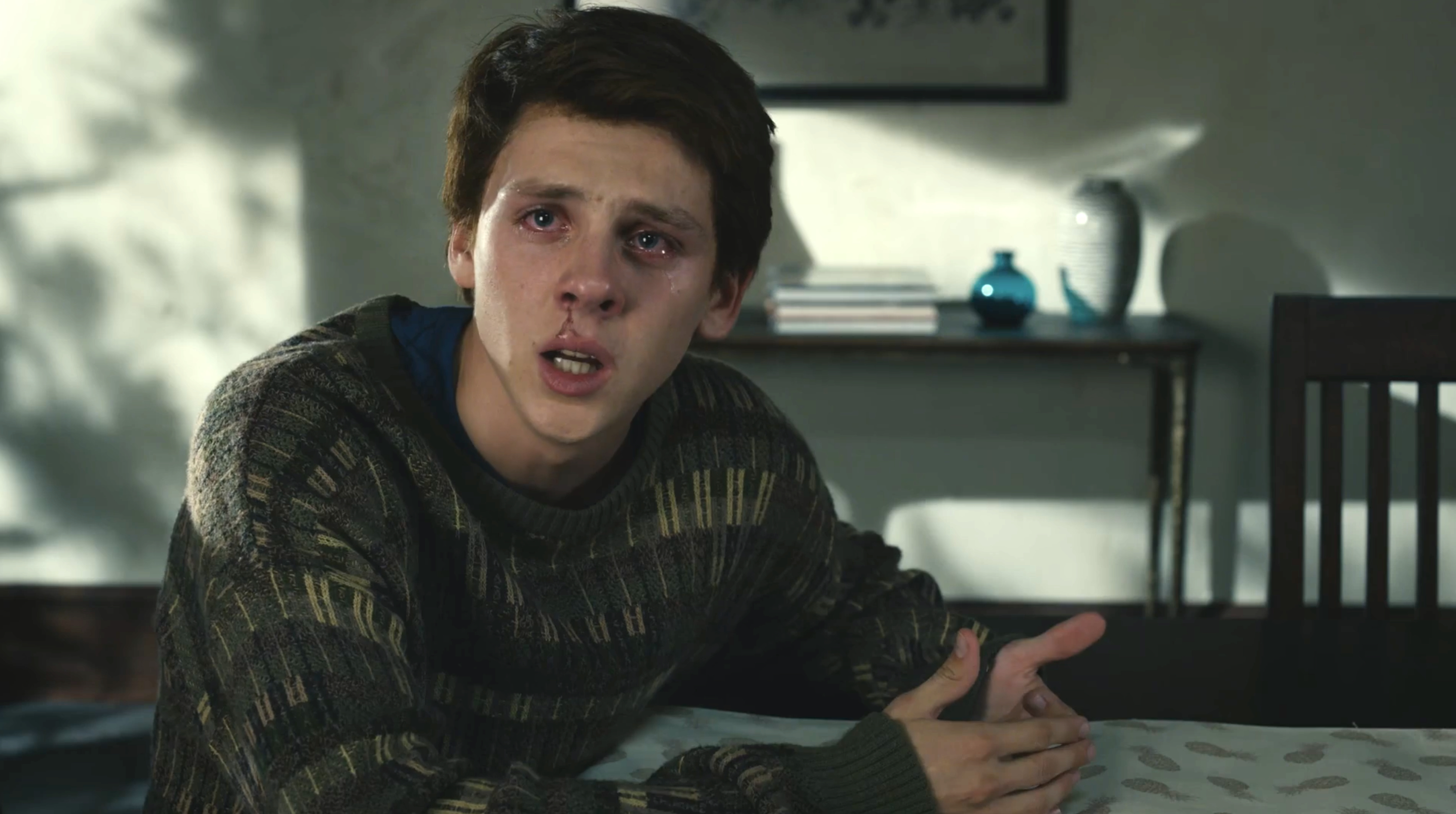 It’s interesting to see Eli in such a low place because Demetri almost has this very same moment late in “All In”, confessing to Daniel (Ralph Macchio) everything about his personal life when Eli was his only friend before Eli and others decided to be “cool” and enlist in Cobra Kai. Demetri wants what Eli has but what he doesn’t seem to be aware of is how fortunate he is to be under Daniel’s wing. Eli certainly got his sought-after popularity — but it cost him his innocence and, in a manner of speaking, his soul. And it seems fateful that, much like Daniel and Johnny, Eli and Demetri are destined to clash.

If we’re headed for a big blow-off in the finale, then one might be tempted to call “All In”, the hump of the 2nd season of “Cobra Kai”, the show’s mid-term. It mostly delivers.

The episode focuses mainly on Demetri as Daniel struggles to put him through the Miyagi paces. As everything’s a joke to Demetri and because this show sometimes refuses to take itself too seriously, the training montages with Demetri are played for laughs (as Demetri sands the Miyagi-Do deck, he gets a splinter; he wants to use a roller to paint the Miyagi house; he complains about doing Kata due to “disproportionate limbs”) which is all well and good except that Miyagi-Do has looked like a lost cause for four episodes and this does nothing to make the audience take it any more seriously than before. 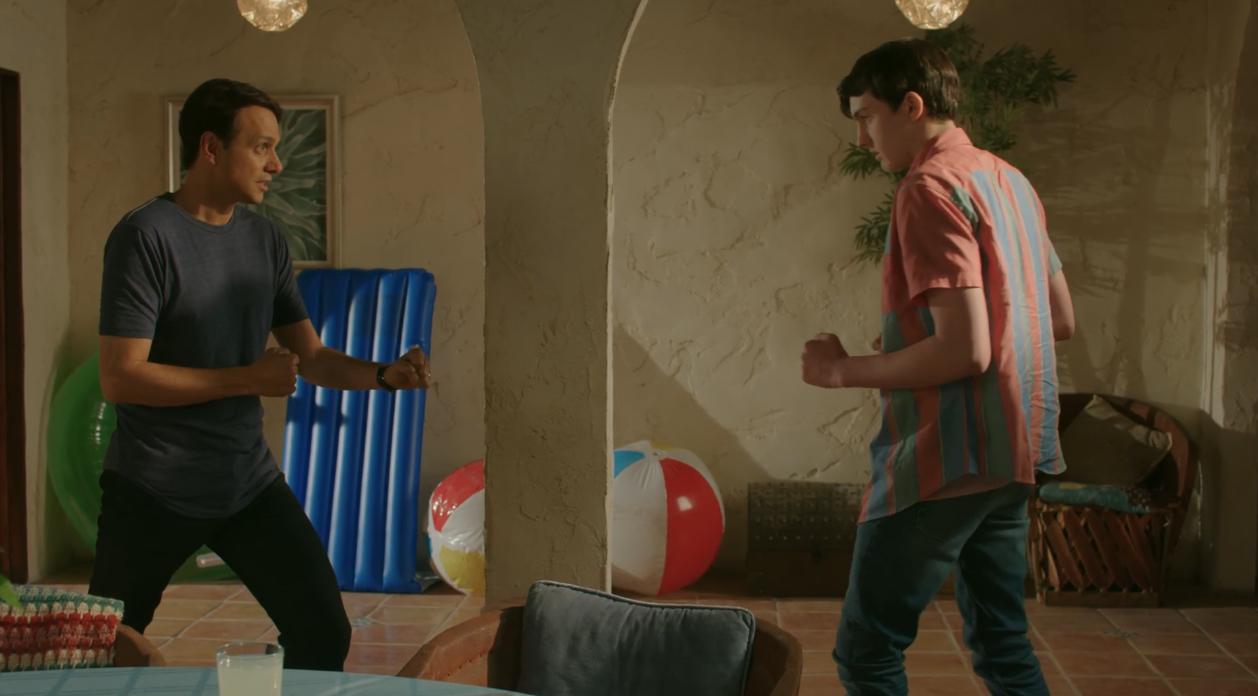 The other bone of contention I have with this episode is that this week’s frivolities exist solely for the namesake of the episode. Johnny’s opening lesson to his students is to “go all in” when an opponent has you in a position you can’t escape from. What does “going all in” look like? Basically, somehow tackling your opponent. In tackling them, you’ve “made a choice” and you “go all in”. None of that makes sense but that’s theme of this thing, so here we are, serving up dialogue that’s literally like this:

TORY: What are you doing on your laptop?
MIGUEL: I’m working on fixing my relationship with Sam.
TORY: How?
MIGUEL: I’m GOING ALL IN…

Your eyes will roll so hard, you’ll travel back into time.

But the big set piece is the first meeting between Miyagi-Do and Cobra Kai since the All-Valley Tournament in the first season. It’s nicely done for what it is (and manages to tie the “raft training montage” into things, as ridiculous as it turns out to be). It’s nice to finally blow off some steam that’s been building since the show restarted and it also serves to build more tension: furious at the outcome of the mall fight, Hawk and Cobra Kai invade the Miyagi-Do dojo at night, completely desecrating it in every way possible and even steal Miyagi’s Medal of Honor, much to Daniel’s anger. The ensuing face-off between Johnny and LaRusso is intense and is even better with Kreese sneering in the background at the two of them. Anytime the two are on screen together in this fashion, it always makes me want to return for the next installment. 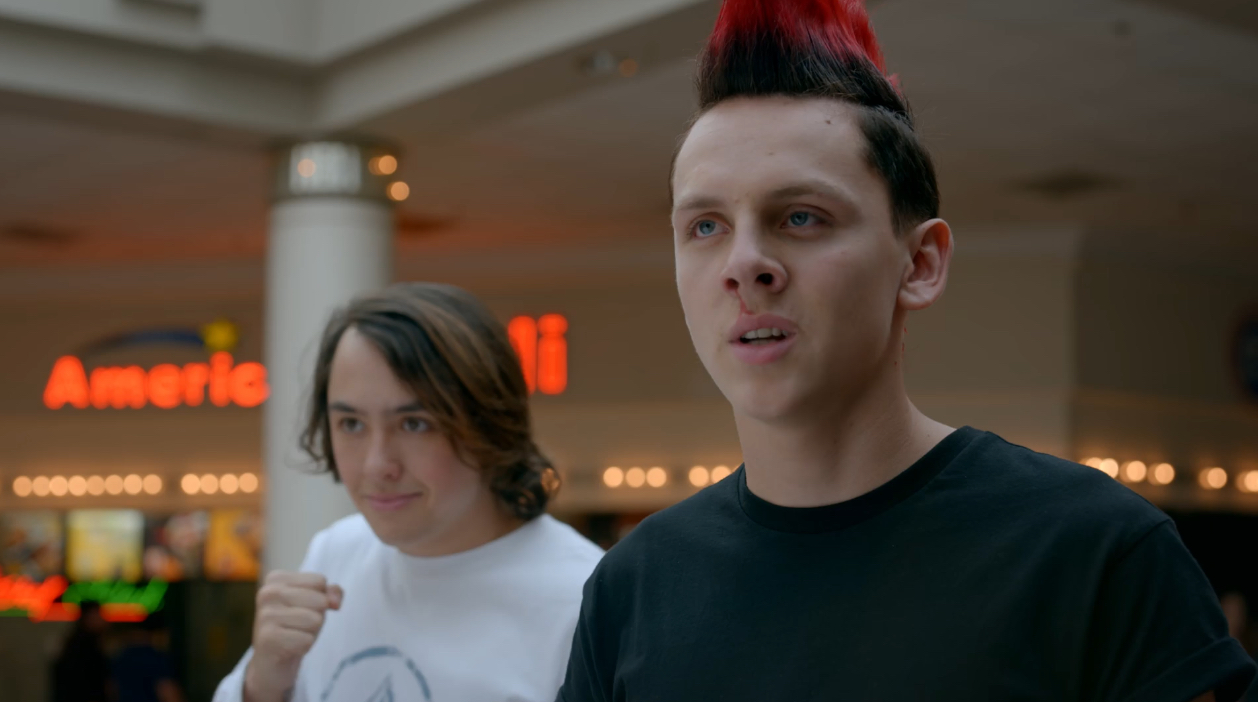 Despite slightly weaker writing (frustrating as hell since the show seems capable of giving us greatness each week), “All In” is another good episode of YouTube’s “Cobra Kai”, a show which not only continues to impress but almost rivals “Game of Thrones” with the level of intrigue and personal politics at play in each episode. “All In” is buoyed by outstanding performances from its usual core of actors as well as Jacob Bertrand who has grown into the role of Eli/”Hawk” nicely.

While not the best of the lot, “All In” is an example of the consistency “Cobra Kai” offers its audience each week and feels primed to promise fireworks for their loyalty.