‘Cobra Kai’ review: ‘Back in Black’ 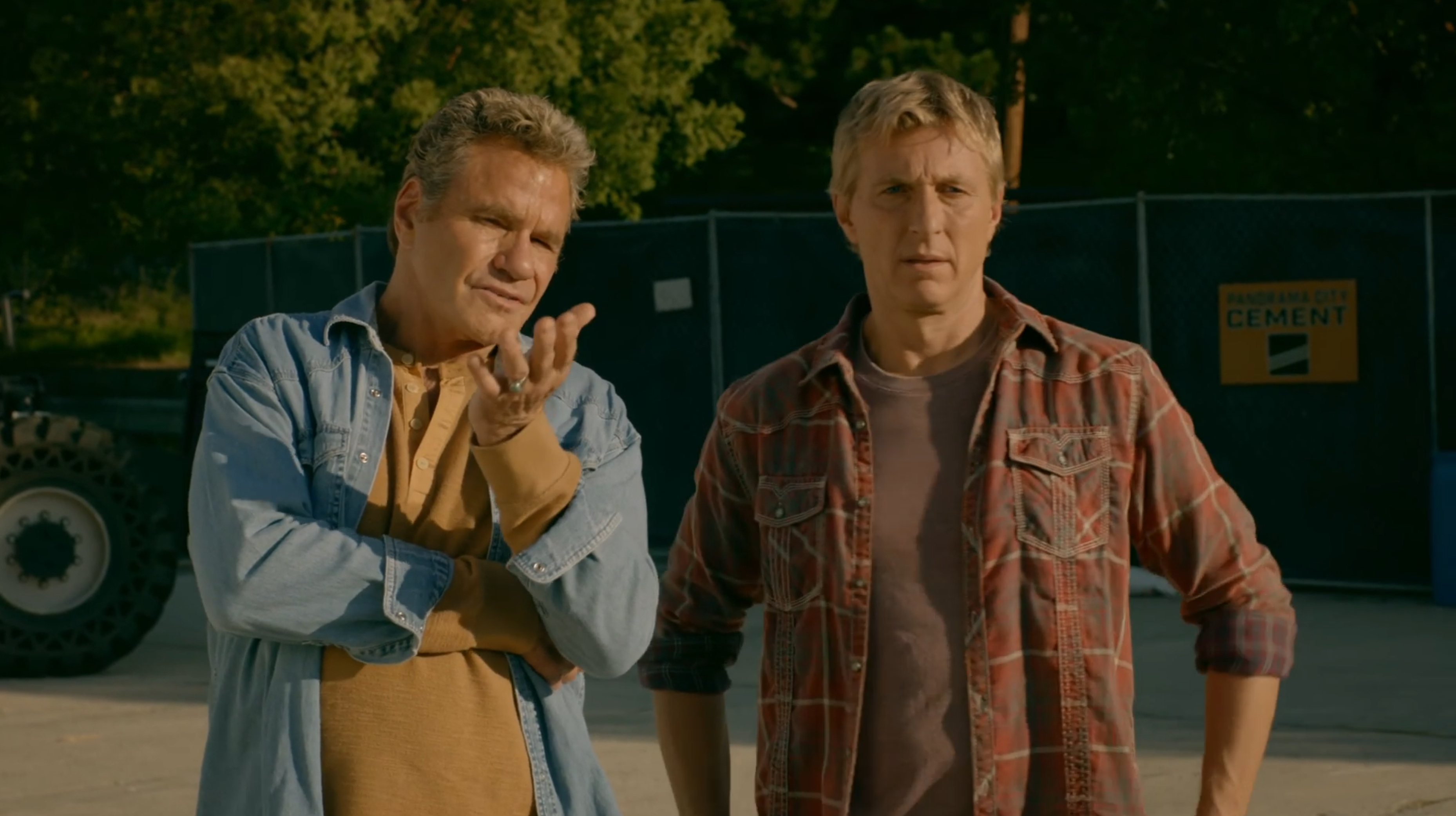 COBRA KAI
Season 2, Episode 2
“Back in Black”
Available on YouTube Premium
GRADE: B-

Johnny (William Zabka) has paid off a cement truck driver to allow him to use his cement truck for an awfully dangerous exercise. He demands that his students get inside the mixer and use their combined strength to spin it by hand. Even Kreese (Martin Kove) who wrote the book on how to abuse students, looks incredulous and uncomfortable. “Don’t worry, I’ve got this,” Johnny assures him as Kreese eyeballs him. Johnny’s behavior shouldn’t surprise us. Last season, he nearly drowned Miguel (Xolo Maridueña) in a swimming pool while teaching him about leg strength, so…on the other side of things, Daniel LaRusso (Ralph Macchio) teaches his daughter Sam (Mary Mouser) and his prize student Robby Keene (Tanner Buchanan) about doing moves at the same time while maintaining balance. He does this by making them stand on a wooden raft in the middle of a pond and has them kick and punch and “sense each other’s movements”.

The second episode of “Cobra Kai” eschews the heavy emotional stuff seen in the first episode and goes for a lighter tone, churning out a pretty silly second episode that’s here to say “Why train in a dojo when you can just make your students do mostly ineffective, borderline illegal stuff that looks like it was lifted from ‘No Retreat, No Surrender’?” The entire episode feels like one huge training montage, starting with a montage of Miguel and Johnny working on Johnny’s badass Dodge Challenger set to, if the title of the episode was any indication, AC/DC’s “Back in Black”. This is off-set by the aforementioned cement truck exercise which is followed by a scene where LaRusso’s automotive competitors are “starting to catch up” since Daniel has been devoting attention to Miyagi-Do Karate. So, it’s off to the dealership for Daniel and his wife so we can have a montage about selling cars, which is nice, but doesn’t add up to anything beyond giving Amanda (Courtney Henggeler) something to do besides come along for the ride and occasionally play devil’s advocate to Daniel’s endless enthusiasm. 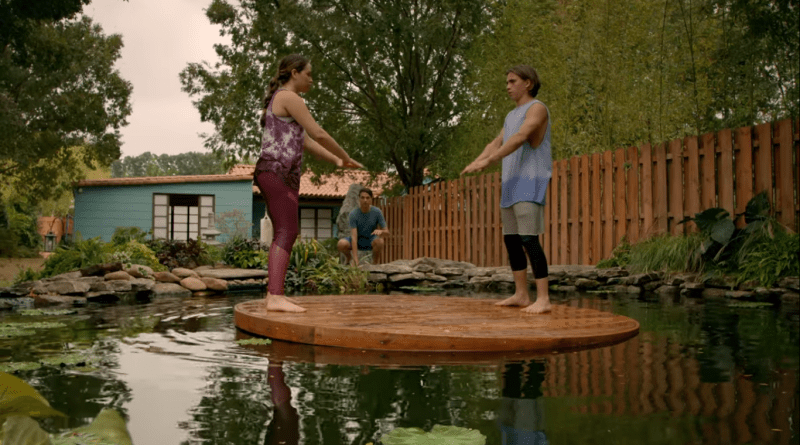 Luckily, there are bits of characterization thrown in to remind everyone what the show was built on and the episode is only so happy to tick all the boxes on the checklist: Robby’s mom, Shannon (Diora Baird), is running off to Mexico with a guy who’s gonna pay her rent…and not much else. When the electricity goes out in their place, Robby simply buys a lantern and attempts to eat cereal with water since the milk in the fridge has spoiled. This doesn’t sit well with Daniel who, like Mr. Miyagi before him, can’t let someone suffer. This ties into the first showdown between Johnny and Daniel since the first season and it’s a lot of fun to watch, for what there is of it when Daniel verbally spars with Kreese for the first time since “The Karate Kid, Part III”:

KREESE: Well, what do ya’ know? The gang’s all back together…well, almost all of us…
(Daniel looks pensive at Kreese’s backhanded remark about Miyagi no longer being alive.)
KREESE (semi-sarcastically): My condolences…
DANIEL: You’re lucky he’s not here…how’re your knuckles doing there, Kreese?
(We get a flashback from the 80’s of Kreese attempting to punch Mr. Miyagi and missing, smashing a car window instead. Back in the present, Kreese balls his fist, then puts it at his side. He grimaces and glares at Daniel.) 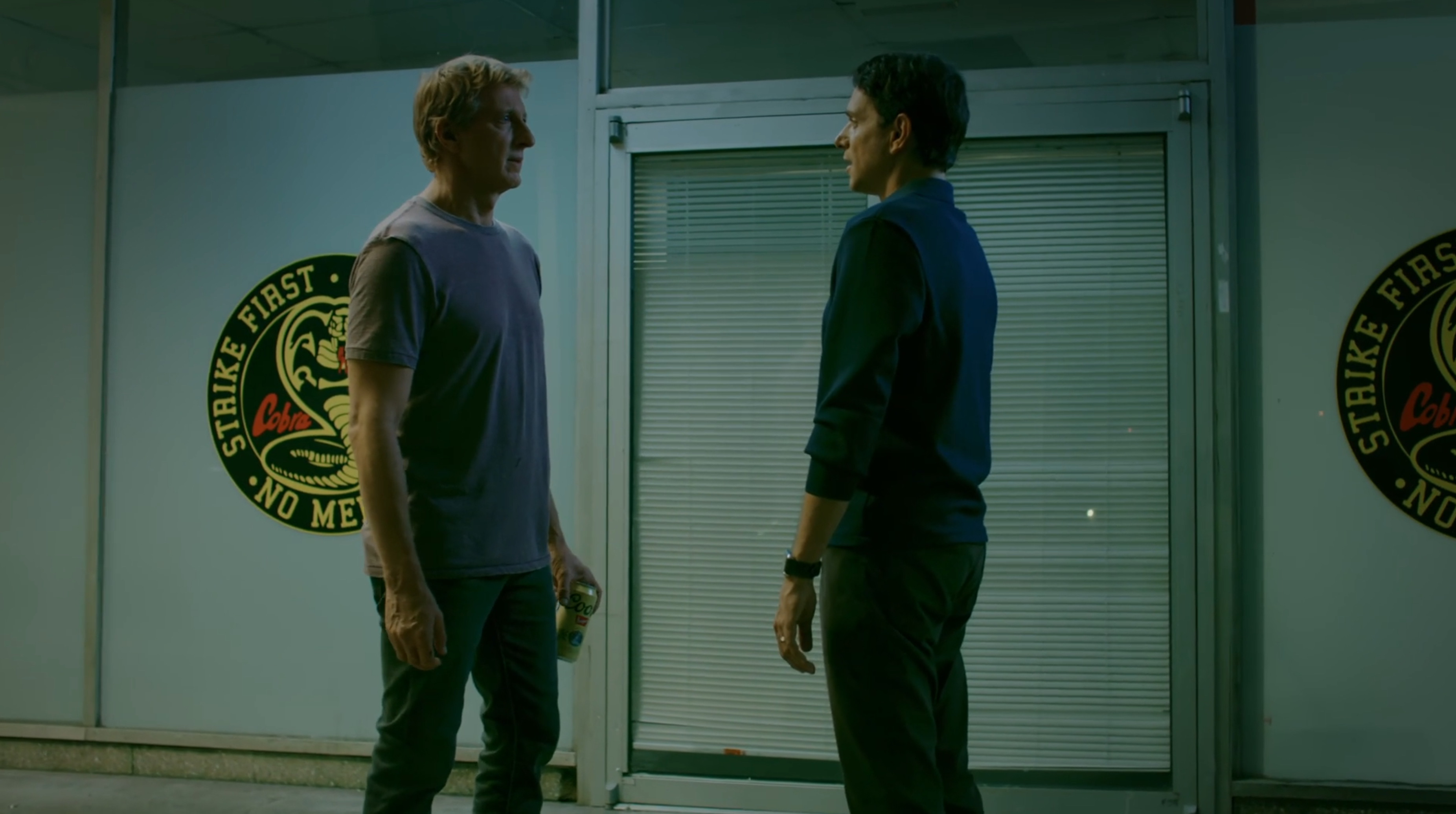 The problem with it is that it’s immediately snuffed out by characterizations that make little sense. When Johnny asks Daniel what he’s doing at the strip mall where Cobra Kai is located, Daniel simply walks away saying he got an answer to a question he was going to ask. To review: Daniel’s mission was to go to Johnny to tell him that Robby is living in virtual squalor — but can’t because he saw Kreese? Shouldn’t the well being of Johnny’s son be a higher priority? It makes for interesting melodrama, sure, but it also makes Daniel look incredibly bitter for somebody who won this fight years ago and proved himself to both Johnny and Kreese. Then again, like that raft in the middle of the pond at Miyagi’s, balance is always key and giving up Robby to Johnny might upset that balance.

The final scene is the ultimate tease and works so well due to the sheer amount of history and chemistry between the three original film leads. Don’t get me wrong, I like Robbie and Sam and Amanda but they’re so squeaky clean that when they’re on screen, it feels like we’re watching a Karate Kid off-shoot on the Disney Channel. This show is a fairly well-managed dance card of entertaining moments and characters but it’s Macchio, Kove and Zabka who provide the glue that holds it all together.

I just wish there was more of them.