If last week was “Lull”, then this week’s episode should be called “Lull, Part 2”.

When we last left Southern California, Daniel’s (Ralph Macchio) wife Amanda (Courtney Henggeler) was upset with Daniel for being so into his dojo and not so much into her. Daniel’s daughter Sam (Mary Mouser) was beginning to get hot and heavy with Robby (Tanner Buchanan) and Johnny (William Zabka) kicked Kreese (Martin Kove) out of Cobra Kai, seemingly, for good this time.

So, where are we now?

Daniel is now sleeping on the couch while his wife tells him that any attempts to make things up to her is “like putting a Band-Aid on a headwound”. Jesus Christ in a dojo, that escalated quickly. Meanwhile, all Sam and Robby do is make out whenever they can while vowing to eventually tell Daniel and Amanda about it. And Johnny makes speeches about “honor” and declares that “Cobra Kai needs to change”…while teaching his kids the art of headbutting their opponents. 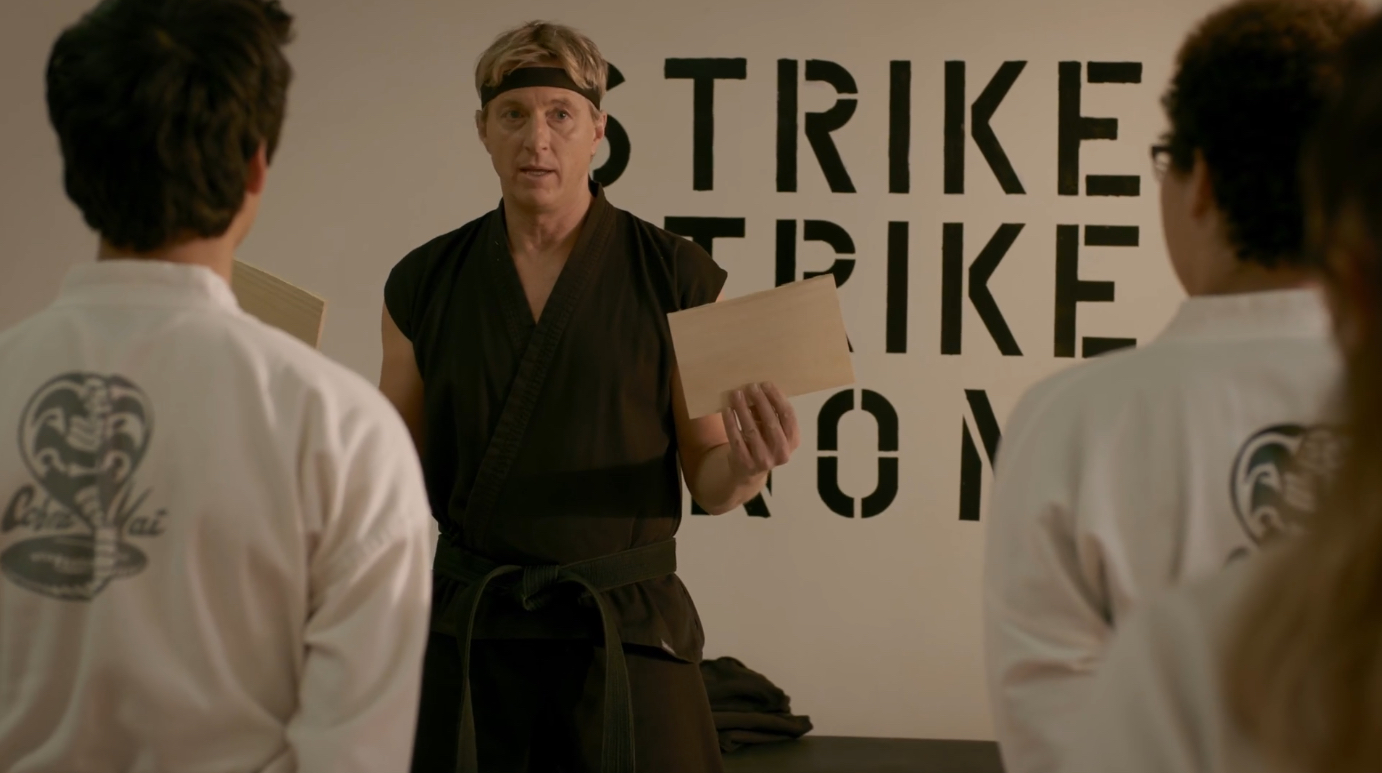 As you can see, there’s a lot going on in “Glory of Love”. It’s just that hardly any of it is terribly interesting and, the more time we spend on these current character arcs, it’s also becomes unbelievable to the point of being unintentionally humorous. I’m not even sure why the whole “Daniel in the doghouse” sub-plot is a thing. I mean, it was established in last week’s episode and not before then and I said as much in my review for “Lull”. But there’s Daniel, surprising his wife with take-out sushi at the dealership. That doesn’t work. How about putting all his underage students to work, waxing the dealership’s cars? Nope, that doesn’t work, either. And it’s against child labor laws (for crying outloud, her character points this out) and she simply points out that “I just know all your stunts to fix this are just temporary.”

Thank the Karate Gods that Daniel’s mom, Lucille (Randee Heller, reprising her role from the original films as well as the first season) is conveniently in town to tell Daniel that, sometimes, a guy’s wife just likes to know that a husband is “in it with her, no matter what” after the two of them reminisce about a family trip to Coney Island where Daniel’s father simply hugged Lucille and told her that he loved her. Thankfully, the moment between Daniel and his Mom pulls an otherwise arbitrary and pedestrian plot line from the fire, so I guess this whole thing was worth it. Let’s just never do this again, mm-kay? 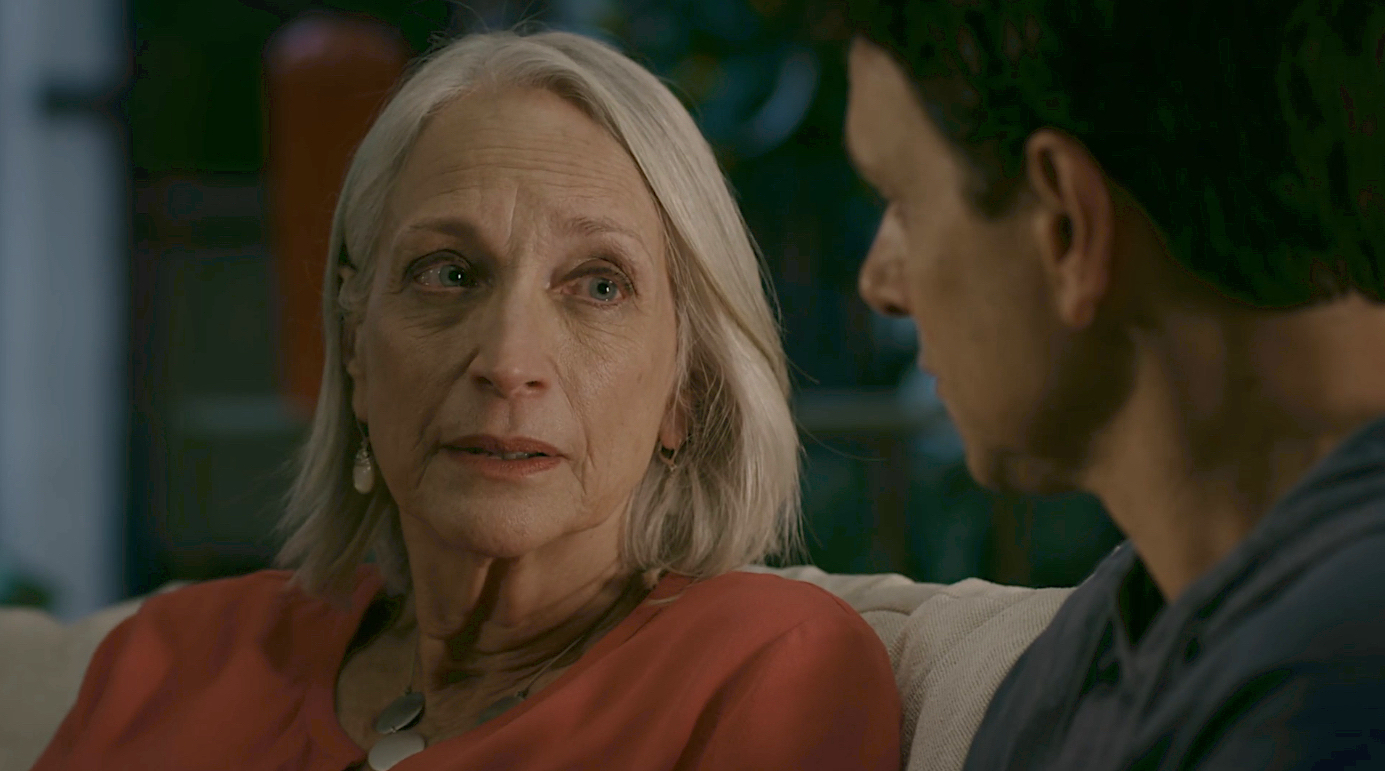 And because Robby and Sam have no chemistry, the rest of the episode features more hijinks between them and Cobra Kai’s power couple, Miguel (Xolo Maridueña) and Tory (Peyton List), who are also hot and heavy — except the writers just can’t leave well enough alone so we’re subjected to a love quadrangle on “80’s night at the local roller rink” (I’m not making that up) where Sam and Robby are dressed like the characters from “Pretty in Pink” (a movie that came out at least a decade and a half before they were born and is over 30 years old) and name drop “Don Johnson” (who Robby calls “Dan Johnson” because, suddenly, he has the IQ of a goldfish and misheard the name) as well as “James Spader”.

The best part of the episode belongs to Johnny who goes on a dating spree after being introduced to Tinder, courtesy of Miguel. Predictably, most of his dates go south (he tells one woman that he’s “good with children” before describing a time where he “body-slammed one to a mat and elbowed him in the face”; he tells another that he “hates the Patriots, too” after the woman in question condemns “the patriarchy”), but three interesting things happen to him here: 1) he finds his old girlfriend, Ali (absentee Elisabeth Shue), on Facebook and messages her — albeit, inadvertently. 2) He literally bumps into a woman (Gena Shaw) and ends up having drinks with her (which is ironic since Johnny describes that this is how “cavemen used to do things back in the day”) and 3) he finally comes to terms with his relationship with Miguel’s mom, Carmen (Vanessa Rubio) after he catches her new boyfriend cheating on her at the same bar he’s at. 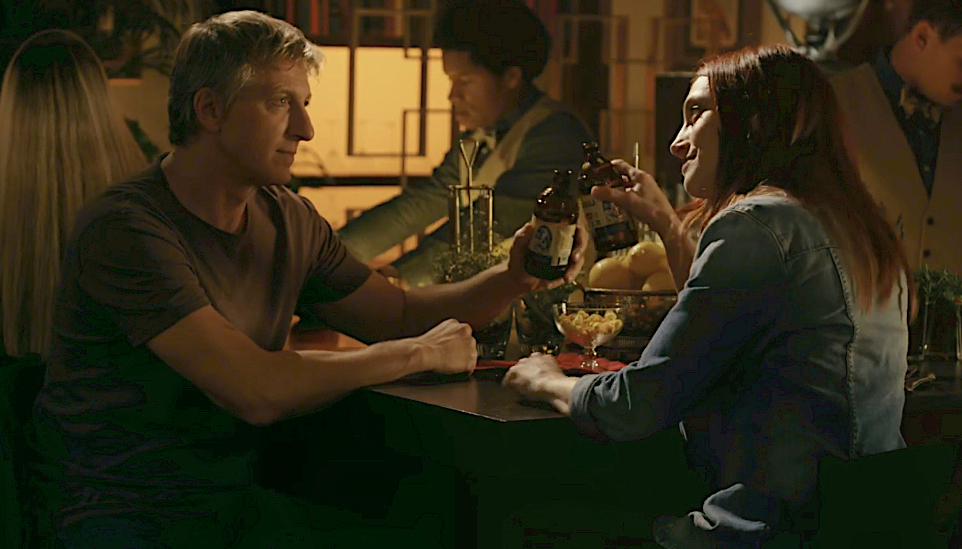 It’s still not great television by any means, mainly because the interaction and chemistry between Johnny and “Melissa” (I mean, we don’t even get her name; I had to research it) is just awesome — but Johnny just dumps and forgets her because he suddenly likes Carmen a lot. The window for Johnny and Carmen was at its widest last season but nothing was done about it. Carmen hasn’t really had much to do in Season 2, so it’s asking a lot of its audience to just accept that Johnny’s feelings for her are suddenly this strong. And it’s even more dubious when Johnny’s feelings for her all but stem for his sudden need to be “the nice guy”, but I guess it works to further humanize him and not make him into such a jerk, so I’ll take it.

We’re two episodes from the end of this season and, mercifully, it seems like the show has wrapped up the LaRusso’s marital problems and will quit subjecting us to children having 80’s retro parties for the sake of being self-referential and meta. The issue here is that the last few episodes have presented us with some interesting ideas but gives them little room to grow and breathe before axing them altogether and moving on. That mentality works when done right (“Take a Right”) but feels arbitrary and listless when done wrong (“Lull”). “Glory of Love”, at best, is a welcome means to an end.