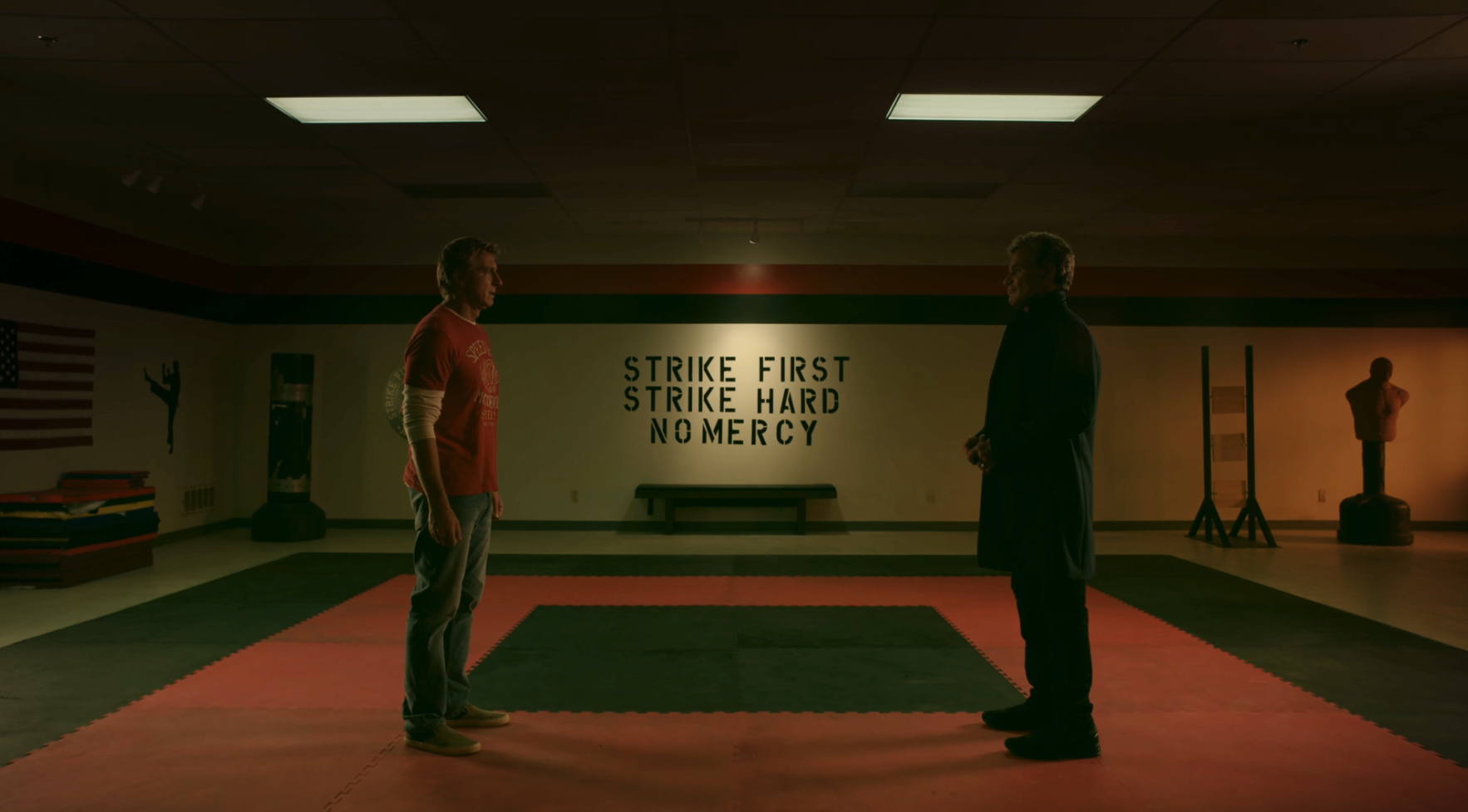 An older, slightly wiser John Lawrence (William Zabka) stands in front of his dojo mirror, looking at his own image. He begins to remember the past, almost as if the mirror is showing it to him. Sensei John Kreese (Martin Kove) has just awarded a young John Lawrence his blue belt — but he’s berating John instead of congratulating him on his promotion. John stands there, listening to his sensei’s venom. He’s shaking and crying. There’s something going on with John’s screwed up home life and it’s manifesting itself here and all he needs is a father figure — but Kreese doesn’t want to hear it. For him, any such emotion is weakness and it makes somebody a loser. He screams in John’s face, making him admit, through his tears, that he’s really a winner. As the scene crescendos, we’re back in the present. The older Johnny stares at himself in the mirror, the brand-new one put in to replace the one that Kreese put him through when the two reunited at the beginning of the episode. The one where, in the broken shards, Johnny could see the moment where Kreese had attempted to choke him out after losing to Daniel LaRusso (Ralph Macchio) over 30 years ago…and in darkly ironic fashion, that moment saves the lives of both Kreese and Johnny.

Because, this time around, Johnny was the one succumbing to his hatred and choking out Kreese.

In “Mercy Part II”, the opening act of the second season of “Cobra Kai”, we’re reminded of just how deep Johnny’s scars run. Despite winning the All-Valley Karate Tournament and putting Cobra Kai back on the map, Johnny can’t help but feel like his victory was invalid thanks to his students’ antics. His top student, Miguel (Xolo Maridueña) attacked Robby (Tanner Buchanan), exploiting his injured shoulder, something Miguel’s family wasn’t fond of and found alarming. That’s when Kreese reemerges to offer his assistance to Johnny who refuses to take it. The end result leaves both men down on the mat and out of breath while sprinklers are set off by a trash fire burning in the corner, courtesy of Kreese’s smoldering cigar being knocked into it during their fight. His students walk in the next day, impressed by what they think are signs of their sensei’s “victory party” after having one themselves at a local Applebee’s.

Even when he’s a winner, Johnny is still a loser, fighting ghosts he can’t get away from. 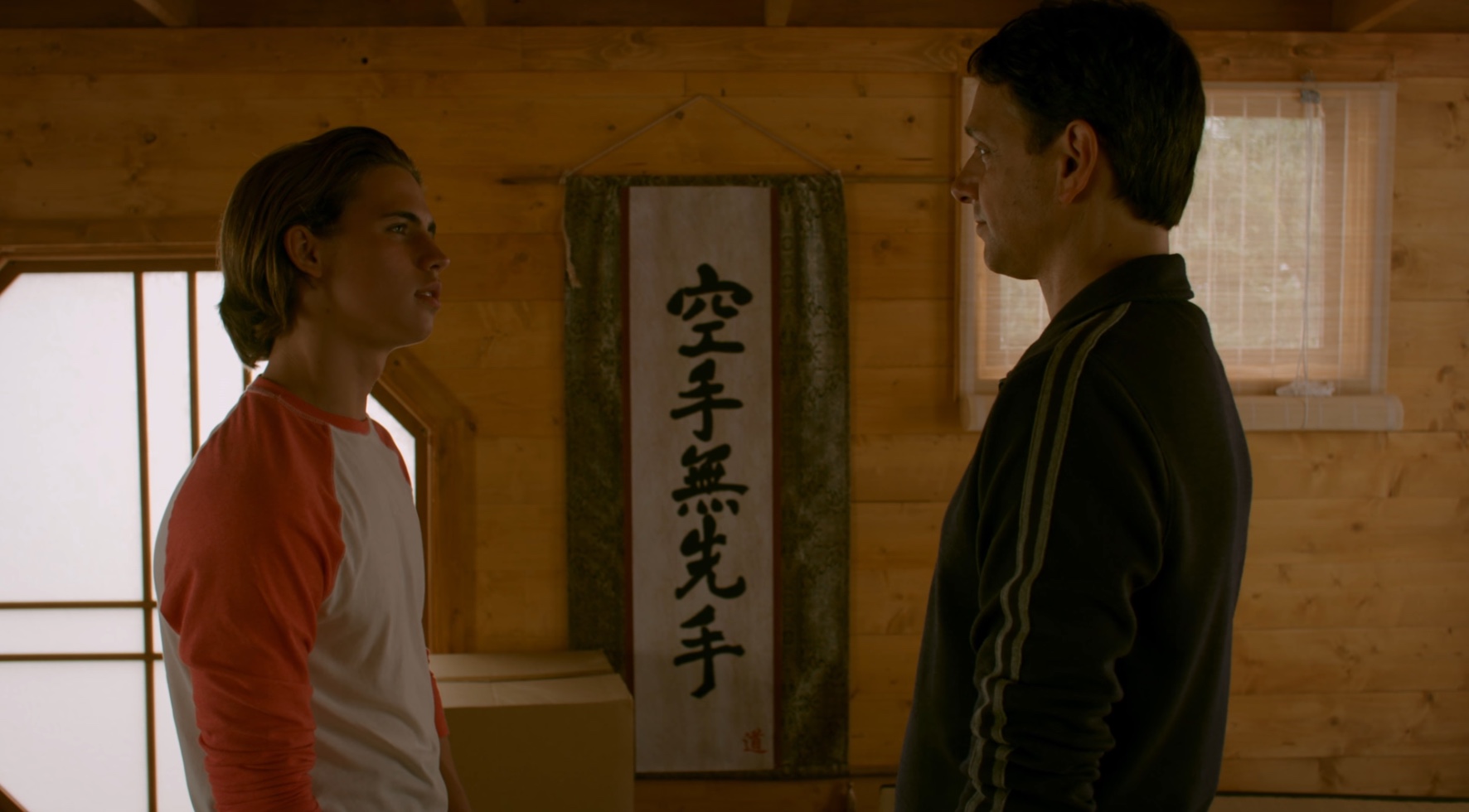 On the LaRusso side of things, Daniel takes the loss and uses it as an opportunity for growth. With Johnny’s son, Robby, under his wing, the two re-make the late Mr. Miyagi’s former residence into a karate studio with all of Miyagi’s old touches: a Japanese garden, banners which teach the importance of focus and pacifism unless attacked. and a pond with a single wooden deck which floats with perfect balance on top of the water. With youth comes inexperienced, uncontrolled exuberance which can easily lead one to unfortunate disaster or euphoric deliverance depending on the guidance in that person’s life. Even when he isn’t teaching Karate, Daniel attempts to be there for everyone, passing on sage wisdom about love to his daughter Samantha (Mary Mouser) who is heartbroken over her break-up with Miguel (see Season 1). Daniel is correct when he tells her that “there’s always someone you think the world revolves around” until things end with that person but he soon finds out that Samantha lost Miguel because she feels as if the Cobra Kai mentality brainwashed her and her other friends, leaving Daniel dumbfounded.

“Mercy Part II” is a great start to the second season of “Cobra Kai”, carrying with it excellent pacing and emotional heft thanks to a great script and excellent performances by everyone involved. Macchio and Zabka spoil us here, giving heartfelt performances and reprise their role with every bit of soul they can muster. It’s a joy to watch the two of them: Daniel, ever so positive and Johnny, full of regret and longing for a time long since past. But the real treat is actor Martin Kove who has joined the cast, reprising his role as former Cobra Kai Sensei John Kreese and besides looking appropriately older, he hasn’t lost a step. Like Johnny, he’s stuck in the past, his scars unbelievably deeper than Johnny’s by virtue of having served in Vietnam and then, after the events of “The Karate Kid, Part III”, voluntarily making the rounds training soldiers in military hotspots around the world. 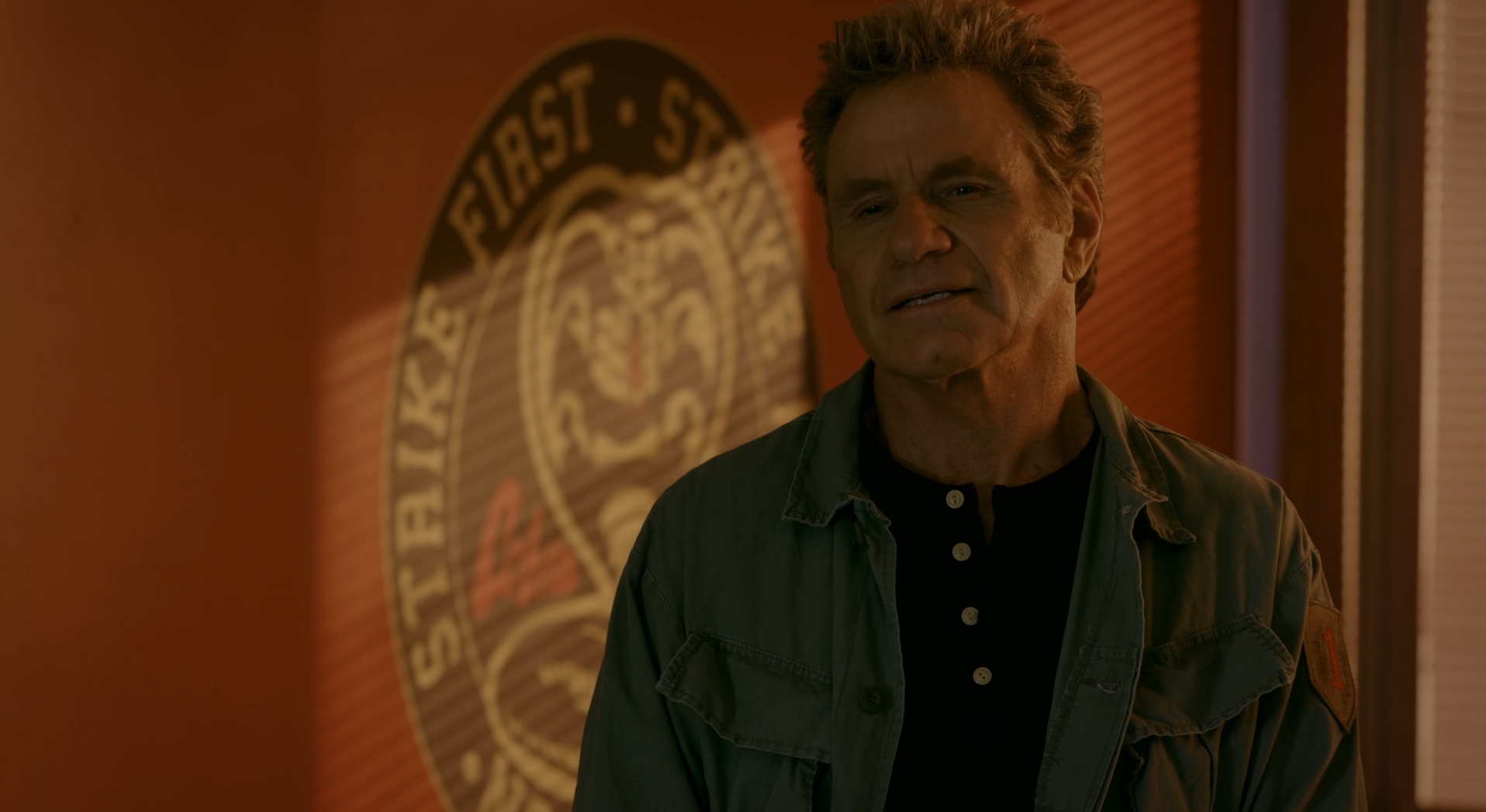 In a diner, Kreese tells Johnny all about the behavior of cold-blooded animals, particularly, a snake. The behavior of “brumation”, he explains, is when a snake digs a hole in the ground to survive the ice cold winter months — but he doesn’t sleep. Instead, the snake waits, staying awake the entire time, waiting for the perfect chance to emerge. “That time is now,” Kreese tells a skeptical Johnny who rebuffs him almost immediately. It isn’t until Kreese finally opens up to Johnny near the end of the episode, apologizing for his past misdeeds with such a sincerity, that Johnny invites him back into the fold. We, the audience, are led to believe Kreese has grown older and wiser, having shed his old skin and finally becoming the father Johnny never had — but then we see the slick smile on his face when his back is to Lawrence.

The snake in brumation has successfully emerged from the cold.

It’s in “Mercy Part II” where we find both Daniel and Johnny at a crossroads, the martial arts equivalent of the Hatfields and the McCoys…or if you want to get even more nerdy, Magento and Professor X. Both men have unique styles born of their particular upbringing and both are ready to bring up a new generation of fighters using those styles. But what do the two have in them? Daniel’s daughter doesn’t want to fight her own friends and his wife doesn’t want him picking a fight with Johnny who, himself, is undergoing a personal identity crisis and seemingly rejecting who he once was in the name of honor.

it’s episodes like these that make “Cobra Kai” live up to its name.