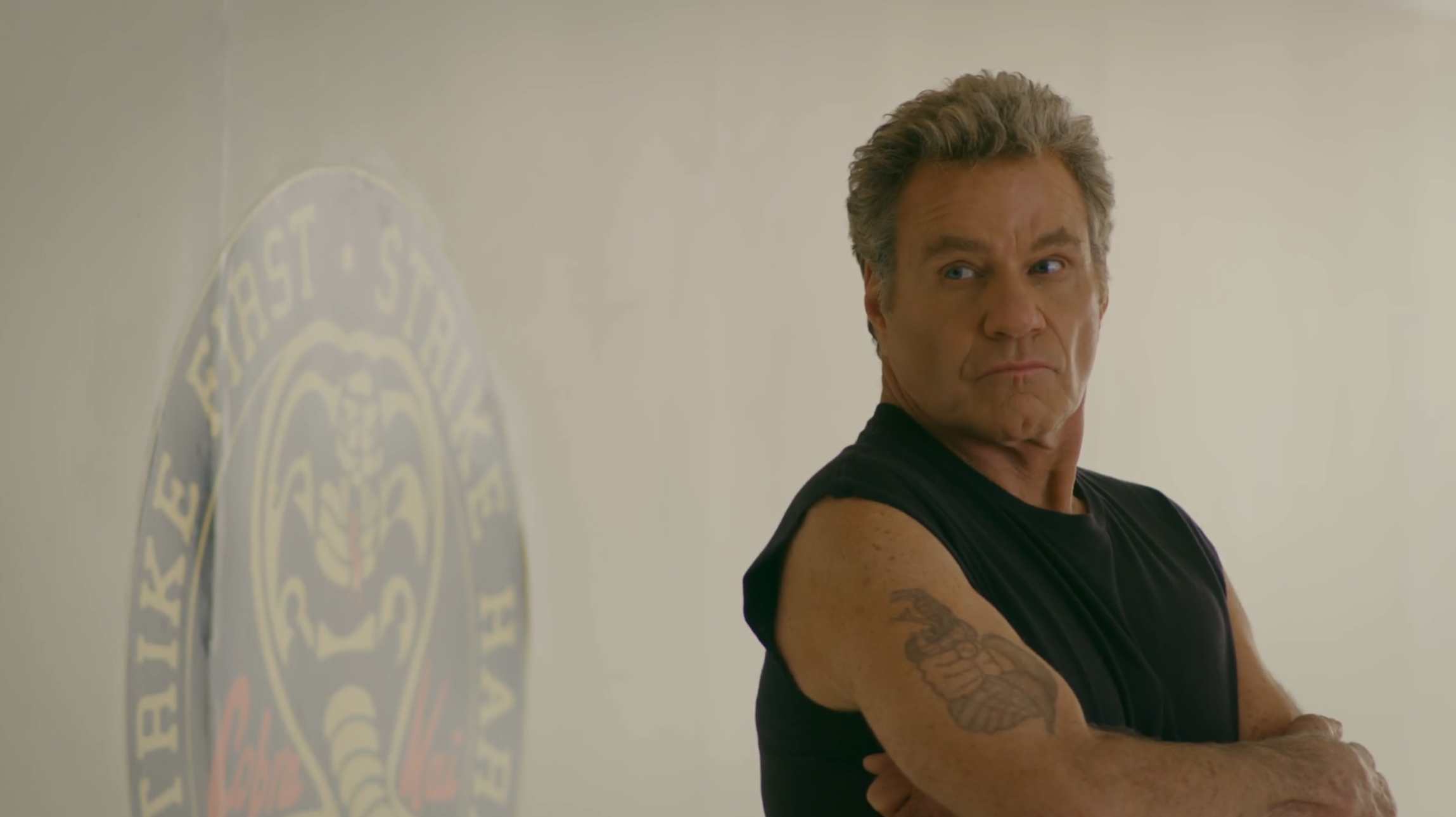 The first time Johnny (William Zabka) and Kreese (Martin Kove) made amends, Kreese was more than a little disingenuous, manipulating Johnny into believing that he thought of Johnny as a son — all to worm his way back into Johnny’s new Cobra Kai dojo. We get a similar moment at the end of this episode — only, this time, it would appear that Kreese has finally, truly made peace with Johnny and his past…or has he? Things are never that simple on this series. But we’re getting ahead of ourselves.

From the title, “Moment of Truth”, the fourth episode in the second season of YouTube’s “Cobra Kai”, sounds like it would be about the eruption of warfare between Team Lawrence and LaRusso but, instead, it’s literally about the truth seeing the light of day. As we’ve witnessed, these are characters with baggage. LaRusso serves Mr. Miyagi’s interests even after he’s become a successful business owner, Johnny’s still grieving over a loss to LaRusso three decades ago and is getting over his abusive relationship with Kreese, who not only carries the weight of Johnny’s defeat over 30 years ago, but his own. And then there’s the lynchpin between the two warring factions: Johnny’s son, Robby (Tanner Buchanan) who is loyal to his surrogate father in Daniel and has a love/hate relationship with his actual father in Johnny. 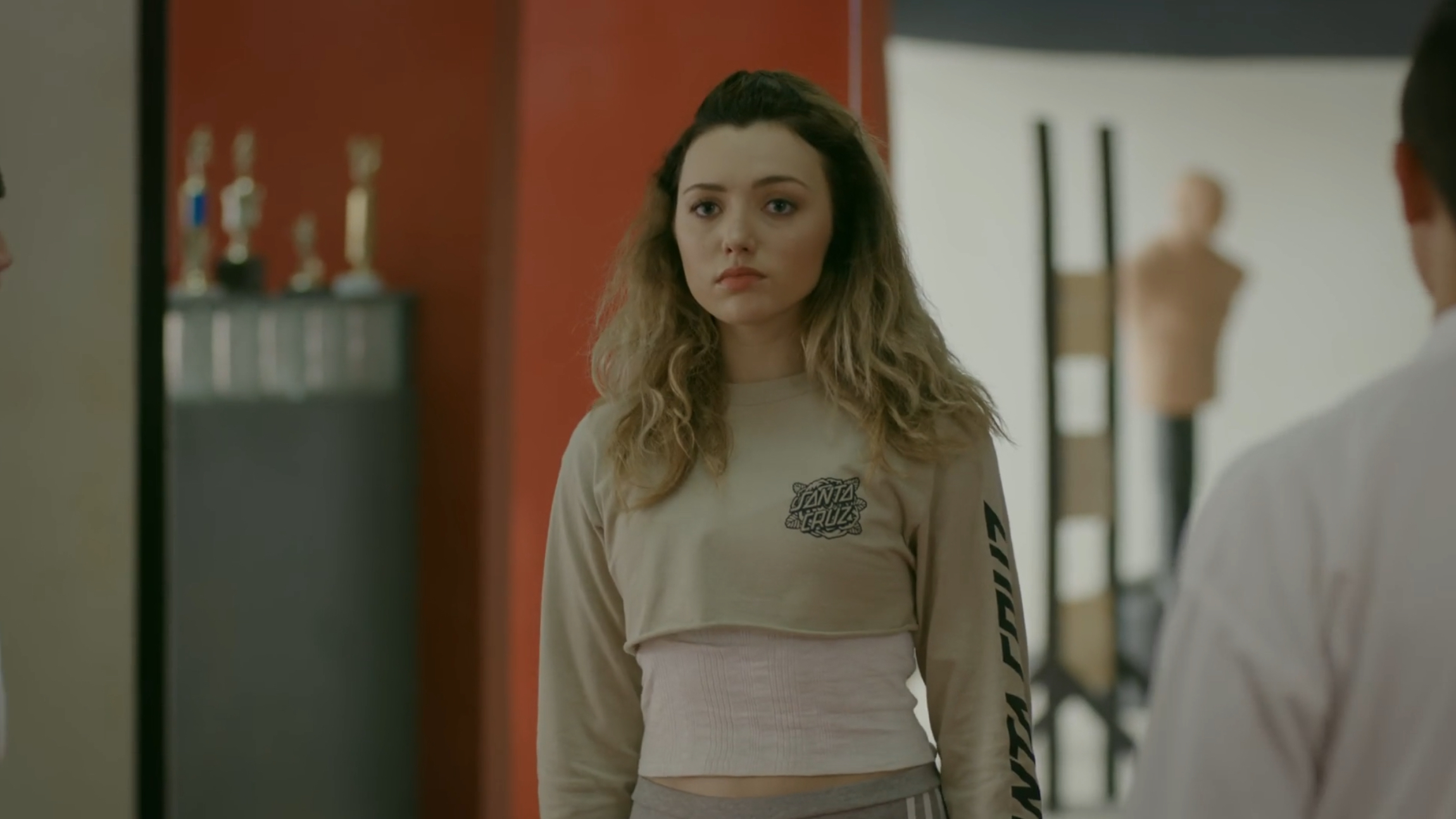 And right when you think it can’t get anymore complicated, a new cog in the Cobra Kai machine enters the picture in Tory (Peyton List), a street-wise street fighter type who comes to Johnny and Kreese, bearing the gift of her own martial arts knowledge — which she demonstrates by taking down Johnny’s prize student, Miguel (Xolo Maridueña) in fairly slick and ruthless fashion, taking advantage of him when he extends a hand in camaraderie at the end of the fight. But who is she? She doesn’t have a last name and we don’t yet know her past but she’s as deadly as a Sith was to the Jedi and eventually becomes a wedge between Samantha LaRusso (Mary Mouser) and her on-again/off-again friend Aisha (Nichole Brown) who only seem to have moments together for the sake of plot movement.

When Amanda LaRusso (Courtney Henggeler) loses her wallet during a Beach Club pool party, Sam immediately accuses Tory of stealing it — and for good reason: Tory rips off a bottle of booze for some underage drinking and where there’s smoke, there’s fire, right? It turns out that Robby’s former friends are behind the pick-pocketing, forcing Robby’s hand and pushing him to admit his past to Amanda when the club’s manager recognizes him and threatens to kick him out for his past sins. He immediately tries to help Daniel by confronting his old friends in front of the camera on his phone — something that nearly backfires until Daniel shows up to finish the job that Robby started. 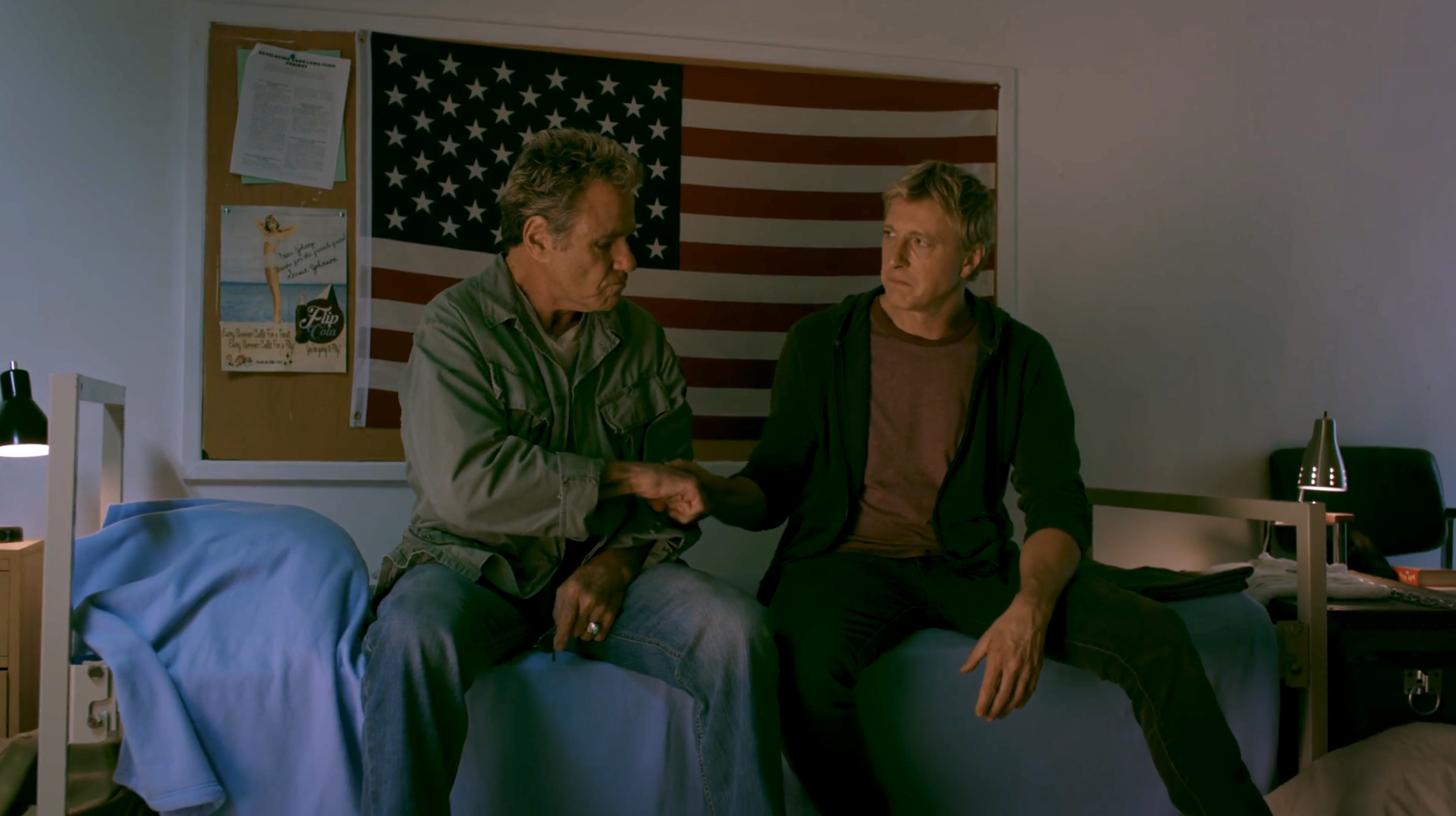 The meat of “Moment of Truth”, however, is the aforementioned confrontation between Kreese and Johnny: when Kreese leaves the dojo to “return to his hotel” to deal with an issue he was blowing up about over the phone, Johnny finds out that Kreese wasn’t yelling at his hotel’s housekeeping staff for “stealing his watches”. He was yelling at the owners of a local shelter for not resolving issues with his roommate. Kreese is like so many other veterans who saw some bad shit overseas and attempted to be the person they once were. He’s poor and nearly on the street. The only thing Kresse knows is violence and intimidation and Cobra Kai is the only thing left for him. It’s a moving scene which ends in a handshake between the two and, as Johnny welcomes new students, he invites a more quiet, subdued and peaceful Kreese to assist him…and we can trust him, can’t we?

“Moment of Truth” is another good entry in the “Cobra Kai” series, one which finally peels away at Kreese’s tough exterior layer and shows us the very broken man underneath. Yes, we saw part of that man in the season opener but it was Kreese being Kreese. This reveal was forced by Johnny’s unexpected search for answers about his former sensei and it’s a decent payoff. The issue is that this story virtually overshadows every other arc and angle the show has to offer, rendering the Team Miyagi’s story silly Disney Channel fodder. Also, one gets the feeling that Kreese still isn’t telling the whole truth. If glossing over the entire arc which occurred in The Karate Kid Part III was any indication (he simply says “an old friend offered me a job” — but goes no further than that), perhaps we’re given an idea of how deceptive Kreese really is when he assaults Hawk’s friend Demetri (Gianni Decenzo) in the cold open when all Demetri was attempting to do was be friendly, albeit in the awkward manner he considers to be “friendly”.

But it may actually be the moment when Kreese tells Johnny’s students that the key to executing a move is “to make your enemy think you are retreating…but just as they let their guard down, THAT’S when you strike the hardest.”

Cobra Kai truly never dies and neither does the devil who created it.