Last year, Cobra Kai won bragging rights at the All-Valley Karate Tournament, seeing Miguel (Xolo Maridueña) win the honors for the dojo by using questionable tactics against Robby (Tanner Buchanan). This year, thanks in most part to Kreese (Martin Kove), a full summer’s worth of hostility and bad blood has been added to the already bitter fallout between the two sides.

And a tournament isn’t the thing that resolves it this time.

It’s been a ten-week countdown to this very moment. If you’ve binged the series, hey, thanks for sticking with me. I am happy to report that “No Mercy”, the second season finale of YouTube’s “Cobra Kai”, not only delivers the goods to every single loyal viewer and fan, but they also inject a couple surprises for the long-time vets like myself. 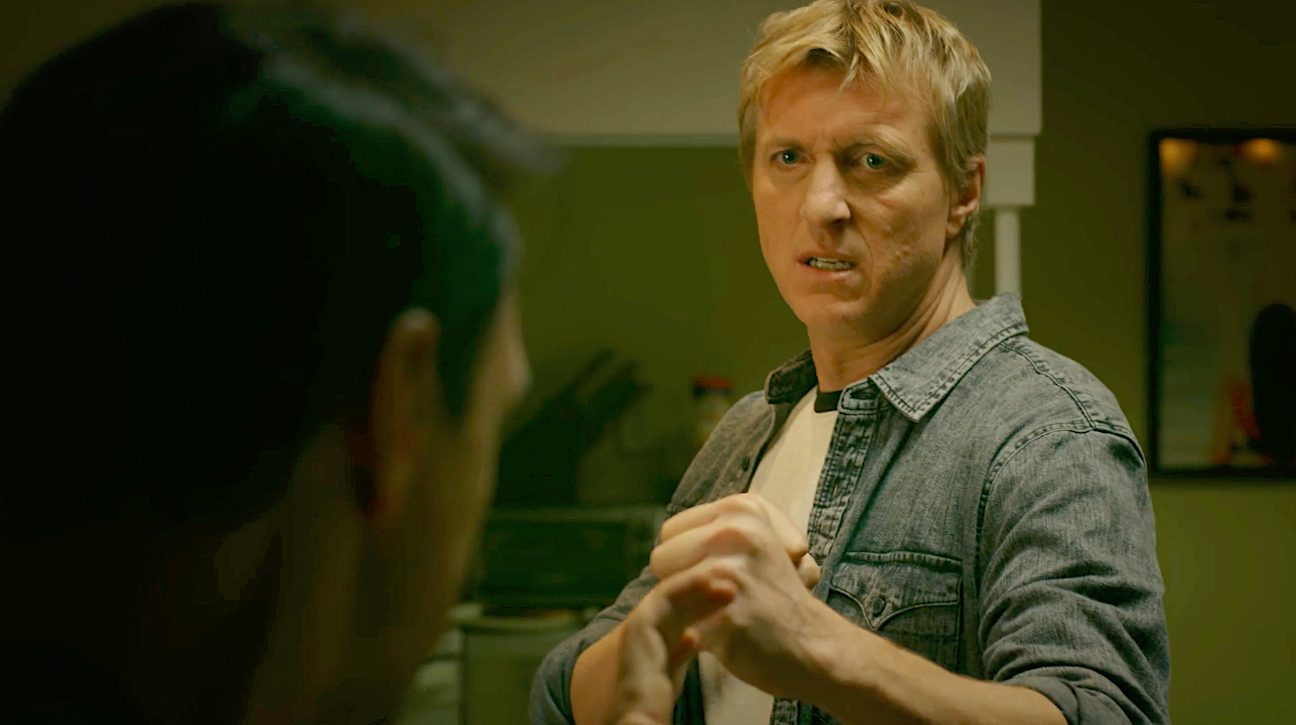 “No Mercy” doesn’t take long to get going. As we saw in “Pulpo”, the powder keg was already set to explode when Robby brought a drunk Sam (Mary Mouser) to his dad’s apartment following a wild party which involved the cops busting down the door to arrest minors under the influence, much like Daniel (Ralph Macchio) does to Johnny William Zabka). Their big fight is beautifully choreographed and edited, the kicks and punches interspersed with shots of their fight over 30 years ago at the All-Valley Karate Championship. The only negative thing I can say here is that it ends far too soon but I suppose it’s just precursor to a bigger, badder fight next season.

From there, the action moves to the first day of high school for the students of Miyagi-Do and Cobra Kai. This being “Cobra Kai”, of course, there isn’t much needed to set off a major war between the two factions. All Sam needed to do, in Tory’s (Peyton List) eyes, is kiss Miguel. The moment where Tory tells Sam that it’s on between the two of them is SO melodramatic (she hijacks the P.A. system in the school’s main office out of the blue like the antagonist in a horror film) but that’s just part of the fun. What follows is 10 full minutes of pure anarchistic insanity that any martial arts fan would be at home with. 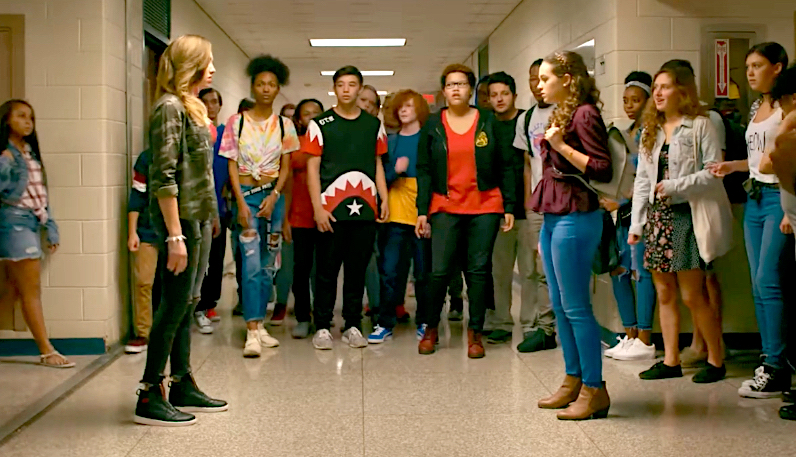 “There are no rules,” Tory tells Sam, wrapping her fist in an elastic bracelet laced with sharp metal studs, while Miguel and Robby fight each other as a misguided, macho attempt to stop the fight on their terms. The entire sequence is a third of the episode’s run-time and everyone we’ve seen in Cobra Kai and Miyagi-Do gets their moment to shine. The two physically small, geeky underdogs, Bert (Owen Morgan) and Nathaniel (Nathaniel Oh) go at it; the gentle giant Chris (Khalil Everage) and Mitch (Aedin Mincks) fight as well; “Hawk” (Jacob Bertrand) and Demetri (Gianni Decenzo) finally get their shot at one another (a fight Demetri actually wins — but apologizes for doing so, in true Demetri fashion); “Stingray” (Paul Walter Hauser), interviewing for a job as “school security guard”, attempts to rough up some of the students to show the principal how great he is…and then there’s Robby, Miguel, Tory and Sam.

While the big fight, itself, may be satisfying, it’s the fallout that matters. A couple episodes back, Kreese (Martin Kove) told Daniel that a “war was coming” and, whether or not you may agree, the entire second season of “Cobra Kai” has been a metaphor for war and conflict. Here, Miyagi-Do comes away the clear victor, with Nathaniel, Chris, Demetri, Sam and Robby all winning their respective fights — but it’s a Pyrrhic victory, largely due to the fact that Miguel is nearly killed by Robby after Robby kicks him over the railing of the second floor, and sends him hurtling, spine-first, into the first floor stair railing. The moment is as horrifying as it should be and, much like Robert Lewis, one of the pilots who helped drop the Atomic Bomb on Hiroshima, you can almost hear Robby thinking “What have I done?” as he looks on at Miguel’s unconscious body. 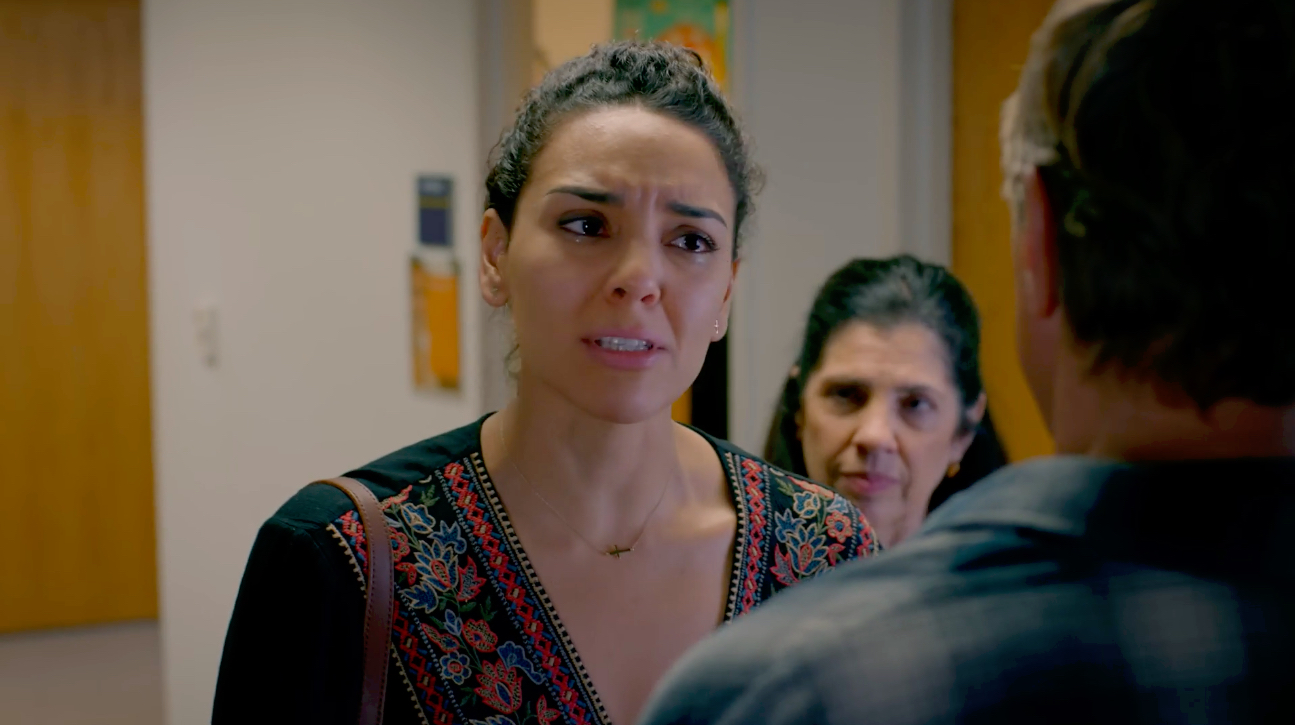 Here, “Cobra Kai” manages to hit every emotional bucket it’s given. For far too long, Johnny and Daniel believe they’ve been running the world in which everyone else lives. All of their smack talk and, proxy fights and intimidation games have left Miguel hospitalized with a massive neck and spinal injury, something which angers Carmen (Vanessa Rubio) and also pits Daniel’s wife, Amanda (Courtney Henggeler), against her husband. The irony of the situation is that Carmen blames Johnny for Miguel’s behavior — despite the fact that Miguel showed Robby mercy during the fight, something Robby took advantage of. The revelation of Miguel’s honorable actions and his subsequent return to innocence is further hammered home in an emotional scene in the hospital where Johnny stands outside Miguel’s hospital room and suddenly gets a voicemail that Miguel left earlier for him, describing his recent “girl troubles”, asking Johnny if he’ll go out for a burger to discuss this stuff, man to man, a side of Miguel we haven’t seen in quite some time.

“No Mercy” is outstanding TV, if just a little muddled with its overall message. On the one hand, it’s great to see the students of Miyagi-Do besting their polar opposites in the big school fight. The mood, in the moment, is one of triumph and exalted fervor.. On the other, the episode doesn’t let us get too comfortable with that, leaving us with an ending that will have us counting the days until the third season is upon us..

OTHER THINGS THAT EXIST IN THIS DOJO