‘Ghostbusters: Afterlife’ is a re-hash — but a re-hash with a heart

When I think about the fact that nearly 40 years have passed since my grandmother took my 7-year-old self to see Ghostbusters at the Town & Country Theater in San Jose, California, I get the urge to walk over to a mirror to find out just how many grey hairs I have.

All jokes aside, “Ghostbusters: Afterlife” has been a long time coming. Stuck in development hell for decades, writers and stars Dan Aykroyd and the late Harold Ramis tooled around with a script that never saw the light of day. Bill Murray really wanted nothing to do with a third film, so talk of adding Will Smith and even the late Chris Farley to the cast to make up for his absence began. Eventually, we got a Ghostbuster video game which several reviewers touted as “the third film”. Even still, Sony would give us the ill-advised reboot film in 2016 which critics gave positive reviews to even though the film was as shallow as a plastic kiddie pool.

Picking up 32 years after the last film, we are introduced to Callie (Carrie Coon), a single mom of two kids, Trevor (Finn Wolfhard) and Phoebe (Mckenna Grace). After discovering that her father, former Ghostbuster Egon Spengler, has passed away (and that she’s about to be evicted from her home due to unpaid rent), she packs up what she has and moves, with her kids, to her late father’s estate, an old farmhouse in Summerville, a rural town in Oklahoma. After the Ghostbusters’ former secretary and caretaker, Janine Melnitz (Annie Potts) shows up to inform Callie that the property is worth virtually nothing, Callie begins to believe that she’s walked into an even bigger mess than the one she left behind.

Regardless, Callie and her kids attempt to make the best of things: Trevor gets a job at the local fast food joint so he can be closer to Lucky (Celeste O’Connor), one of the girls who works there, while Phoebe attends summer school in order to satisfy her appetite for knowledge. It’s here that Phoebe meets “Podcast” (Logan Kim), a kid who…well, podcasts if his name is any indication. The subject? Conspiracy theories and the supernatural, of course. The two stumble onto a hell of a story when they begin investigating the earthquakes which plague Summerville even though the town doesn’t have any fault lines, a fact pointed out by summer school teacher/seismologist Mr. Grooberson (Paul Rudd), who would rather study the phenomenon than actually teach.

Separately, Phoebe discovers that she and her family aren’t exactly alone at home and that the spirit of her grandfather seems to be guiding her into restarting the family business. The quakes, it turns out, aren’t of natural origin and are a product of pent-up psychokinetic energy that Egon spent the latter half of his life attempting to keep a lid on, which not only alienated him from the town in which he lived but also served to destroy his relationships with his daughter and the rest of the Ghostbusters.

Director Jason Reitman’s “Ghostbusters: Afterlife” is very much like the old, broken down Ecto-Mobile we see in the film: it’s dusty and dirty from years of neglect and mishandling, held together by rusty bolts and old, cracked hoses and wires. At times, it shakes and shudders and it barely runs. And when Reitman wheels this thing out to audiences 37 years after the first “Ghostbusters” film back in 1984, audiences might be purely incredulous — but underneath its shoddy exterior, the film has a very large, beating heart which keeps things running and makes its audience smile.

Everyone in the film is perfectly cast from top to bottom. Carrie Coon, who was outstanding as Ben Affleck’s sister in Gone Girl, is very good here as Callie, playing her role with familiarity that will resonate with any mother. Paul Rudd is his usual charming smart-ass self as Gary Grooberson, a teacher who actually tells his students that he doesn’t want to teach them and, instead, subjects them to non-stop horror films each day like Cujo and Child’s Play. 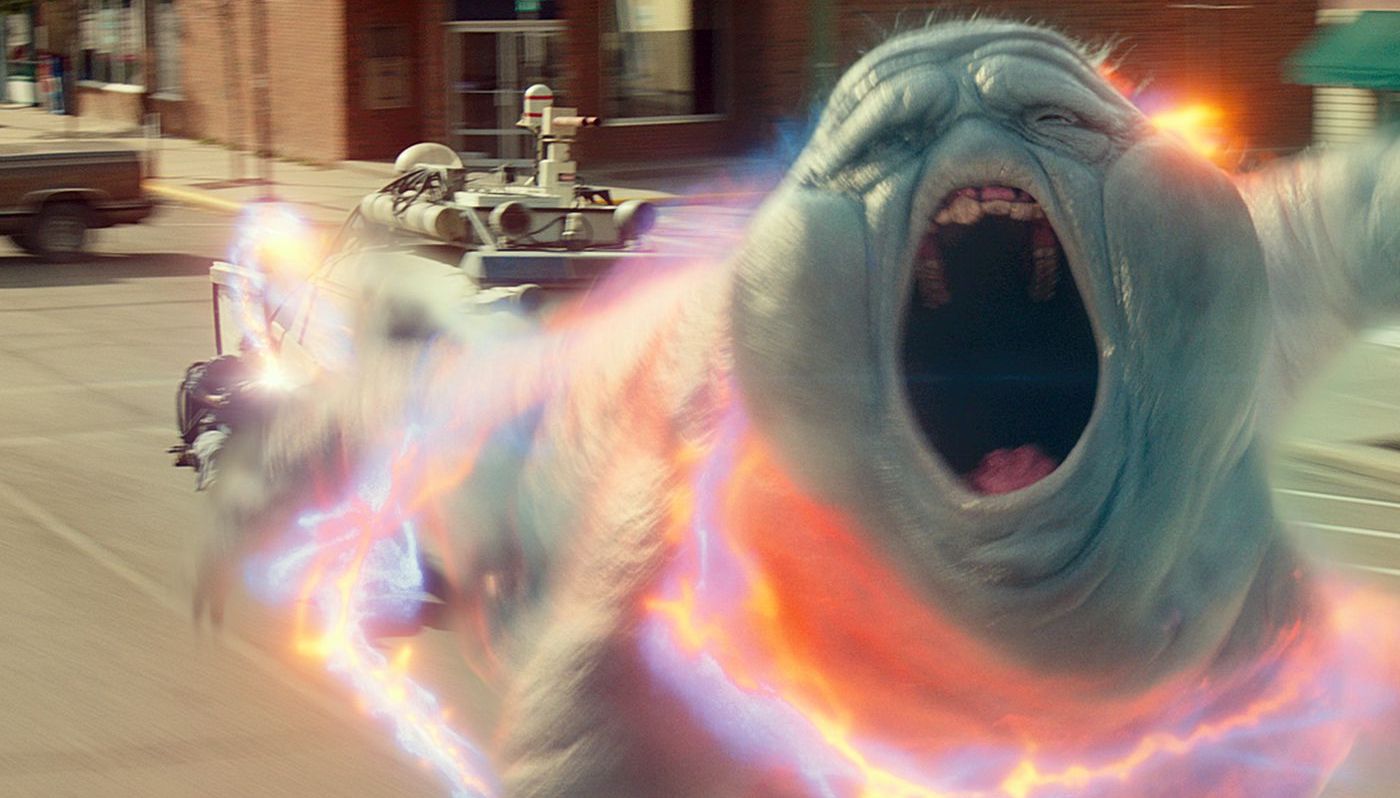 Thankfully, Reitman (who has experience with kids in film) allows the younger cast members to carry the picture which gives Grace Mckenna (who was the young version of Theo in the Netflix series The Haunting of Hill House) a ton of screen time. Completely intelligent and accessible as Phoebe, McKenna makes the film worth watching and she has great chemistry with her co-star, Logan Kim who plays “Podcast” with a goofball exuberance. The two play off one another extremely well and you don’t doubt that neither of them is really frightened of the phantoms haunting Summerville.

The film is basically a walk in the park for Finn Wolfhard (he’s basically just playing the same type of kid he is in Netflix’s Stranger Things) and O’Connor is easygoing as Lucky (glad to see that she got a big break after Freaky) — but with Grace and Kim stealing much of the film’s spotlight, Wolfhard and O’Connor feel as though they’re simply round out the kid cast and make up the rest of the new “team” as it were. Still, it’s the kids that carry this film and Reitman was right to move the adults out of the way in order to allow them to do so.

This is also one of the main issues I have with the film: while it bathes in the world created by Aykroyd and Ramis all those years ago and delivers non-stop nostalgia (even Rick Simonsen’s musical score evokes the silly bounciness of Elmer Bernstein’s original themes from 1984), the movie, at times, seems more intent on fan service rather than giving the audience a deep and involving story. To his credit, Reitman (son of Ivan Reitman who directed the first two films in the franchise) has a better eye for the camera than his father and gives us sun-soaked fields, neon-lit diners with old Top 40 hits echoing like old ghosts in the parking lot, and kids in old cars and pick-up trucks, hanging out together during their free time. The film has a very retro feel to it, so the nostalgia factor feels as welcoming as it is pandering.

Even still, it’s the script which ends up being the issue. For one, while a serious approach is appreciated (and necessary, considering a good portion of the film deals with people coming to terms with the past), the film is surprisingly lacking in humor which, while expected (these kids aren’t comedians or comedy writers like Aykroyd, Ramis, and Murray were), still feels odd, considering that the witty and organic verbal exchanges were the heartbeat of the last two films. The story is also paper-thin and doesn’t make a whole lot of sense after you think about it and the overall plot and execution make the proceedings feel like “Ghostbusters Lite”.

The film also has its surprises (and tries to go Marvel Studios on us with two end credit sequences, so stick around as Sony attempts to sell you a new franchise), a bunch of which land with style points (the climatic battle at the end is amazing and fun with a nice bit of cameo work) and some which border on unforgivable (Mckenna’s dad jokes are painful as hell and don’t feel natural and the “ghostly reunion” is borderline cringe).

But even though the film feels like a re-hash of the film (and the video game “sequel”) and gambles on its audience reliving their childhood (and, perhaps, shedding a tear over the more maudlin moments), “Ghostbusters: Afterlife” actually has a heart and a soul and makes up for the thoughtless kajillion-dollar dreck that was the 2016 version.