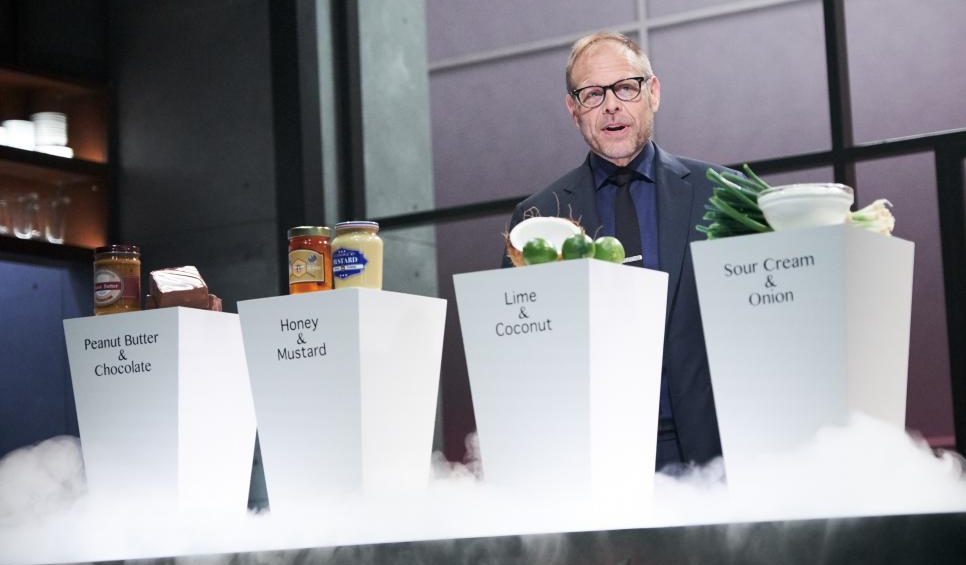 Welcome back to the Iron Chef Gauntlet recap series at Matt’s Entertainment! When we last left The Stadium de Kitchen, Chef Nakajima had beaten his second opponent in a row, knocking Chef Gulotta out of the game. Who’s next on the chopping blo–oh, sorry. Wrong show. Let’s see who goes next…

S TO THE STEZZO, I TO THE IZZO! 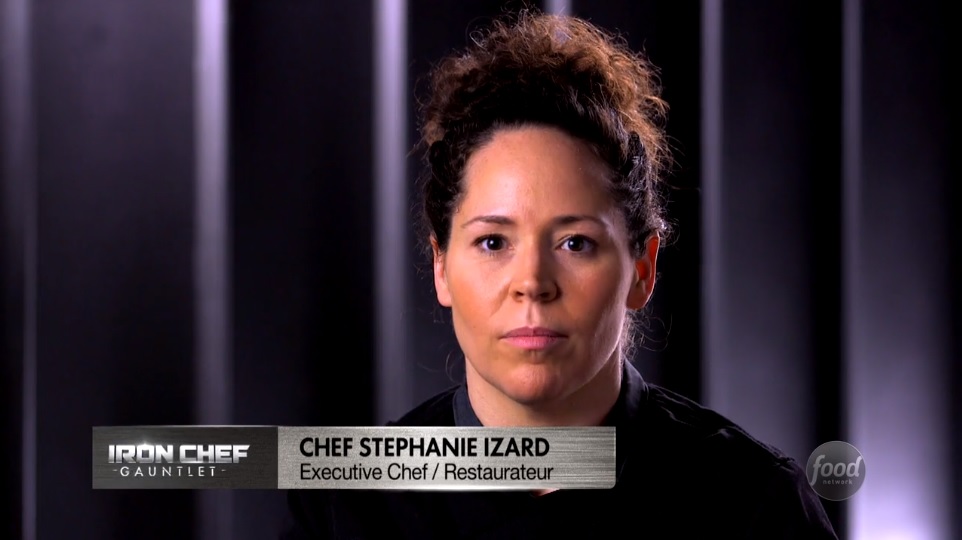 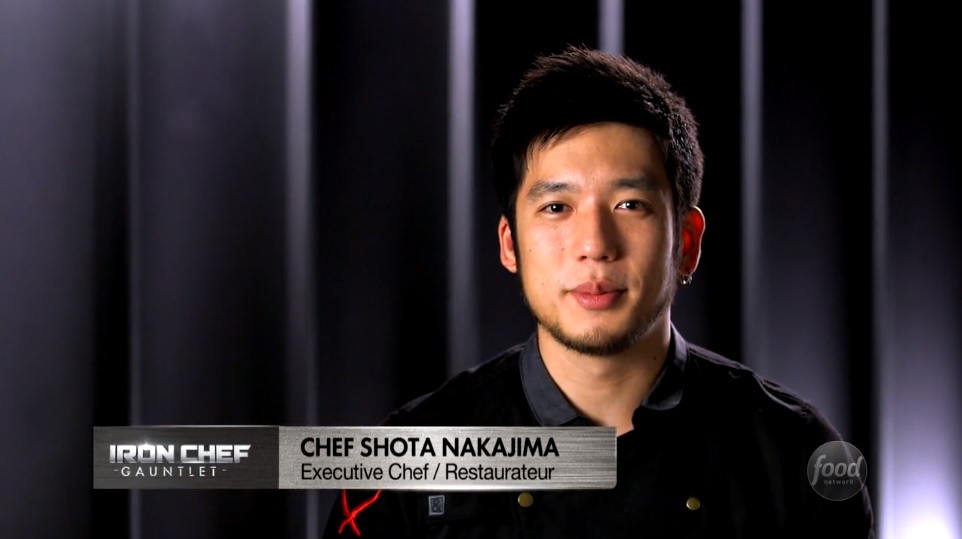 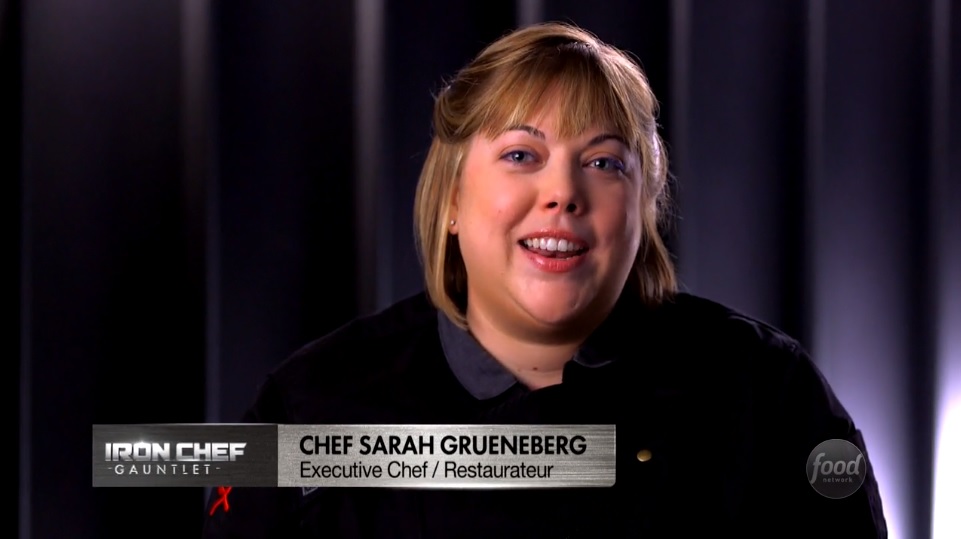 and THE LONE WINGMAN! 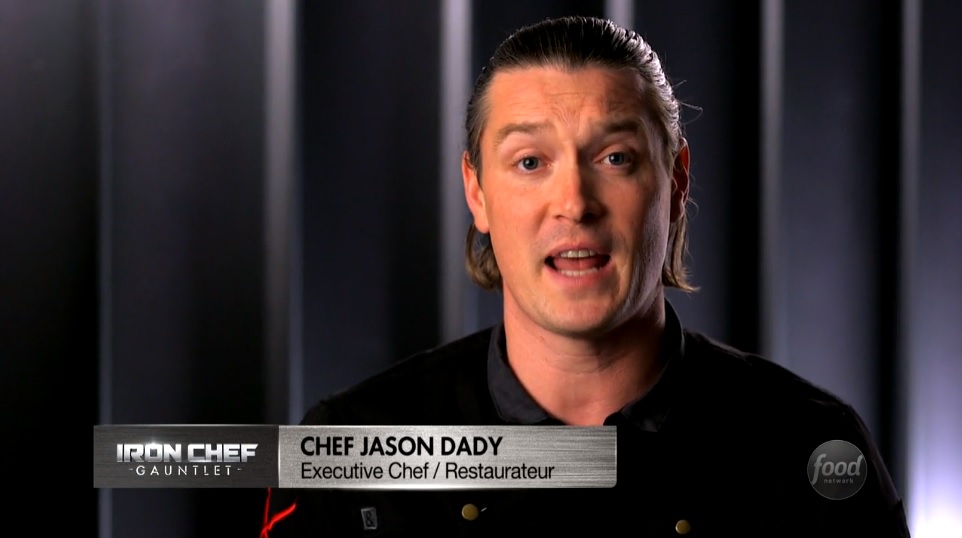 Alton welcomes the Final Four into the kitchen as Nakajima declares he’s exhausted — but confident. He’s ready to win this thing and become the youngest Iron Chef in America. Anyone have that feeling that Nakajima’s going home soon? I’m feeling it, too.

Chef Izard says that this whole thing is “getting real”. Oh, honey…it was real weeks ago.

Alton springs his latest trap: “classic combinations which each chef must re-invent”. Because Iron Chefs do that all the time or else they’re not Iron Chefs. The combos are as follows:

Grueneberg: “These ingredients go together so well, but re-inventing them is hard.”

We’re basically finding ways for these people to say the same thing over and over again.

Secondly, yes, these are “classic combos” if your diet consists of swilling Pina Coladas by the glass at a bar in Cabo San Lucas and then trying to sober yourself up with whatever’s in the vending machine next to your room.

Alton says that it won’t be a tackle fight this time: he has four cards and the ingredients will be chosen “democratically”: each chef will choose a card from his grasp and this will determine the order in which they get to pick their ingredient. Until Russia hacks the process and sour cream ends up with peanut butter. Can’t wait. I think somebody needs to explain what “democracy” is to Alton.

Dady wants lime and coconut — but picks spot #4. What luck. Izard wants peanut butter and chocolate — but not for a dessert. She wants to cook it with beef. She’s #3. M-kay. Grueneberg has #2 which means that Nakajima is #1.

He chooses Honey & Mustard and will make something shrimpy.

And Dady gets his Lime and Coconut. Dady’s making Thai Red Curry. 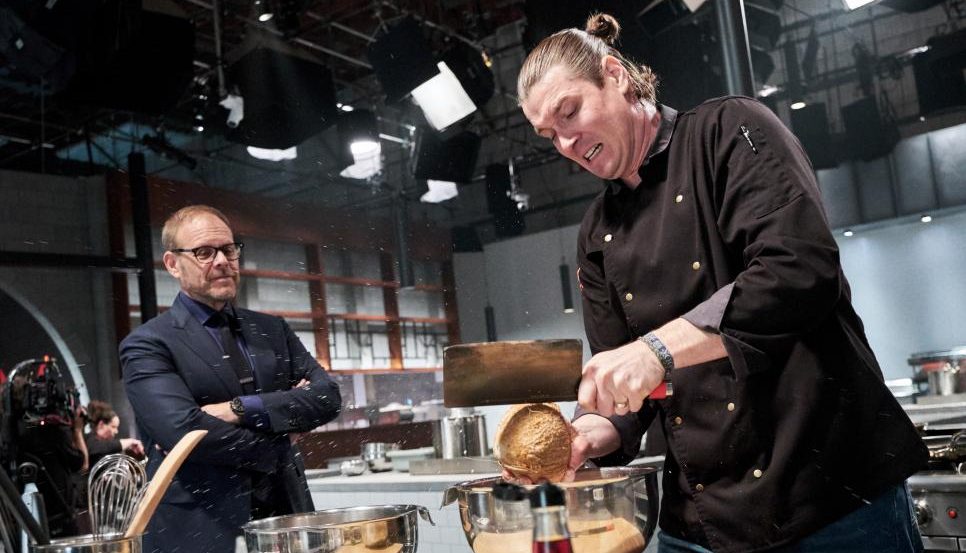 Alton’s already being nosy and asking Dady if his dish is “re-inventing anything” to which Dady responds, “You’ll love it.” Alton’s like “That isn’t an answer.” Izard trashes Dady and says that “Curry isn’t re-inventing anything”. Dady’s a touch peeved, so Alton mocks her Reese’s Ribs. Izard’s like “whatever” and we move on.

Dady’s trying to be all re-inventy but can’t get his “coconut foam” to work. So, he makes “coconut ice” made with liquid nitrogen.

Nakajima just fries the shit out of shrimp and dunks it in honey and mustard. “Because I don’t think anyone has used honey and mustard in a Sichuan dish before”. Yeah, they have, dude. It’s called Google. Also, a restaurant right down the street from me does it to their prawns.

Let’s skip ahead to the first tasting: 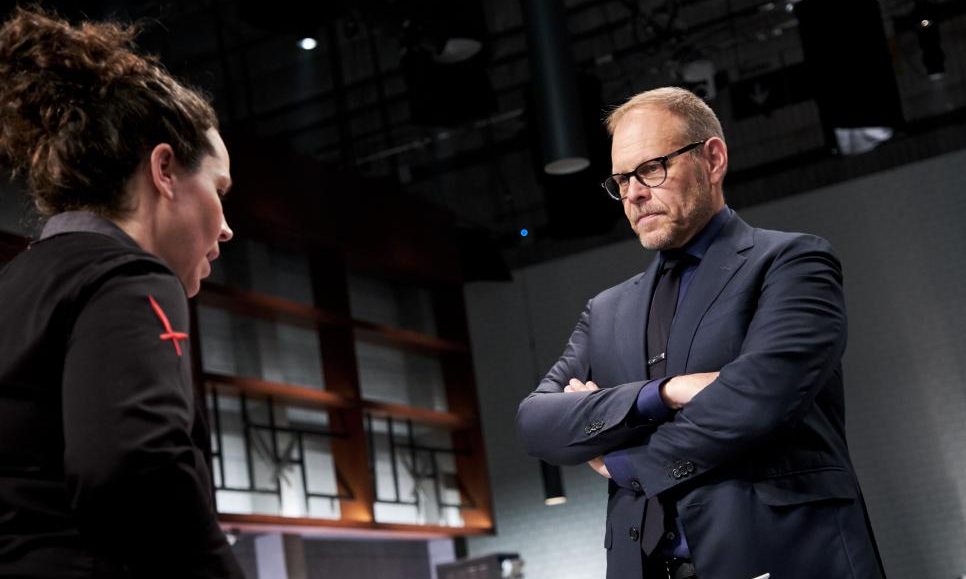 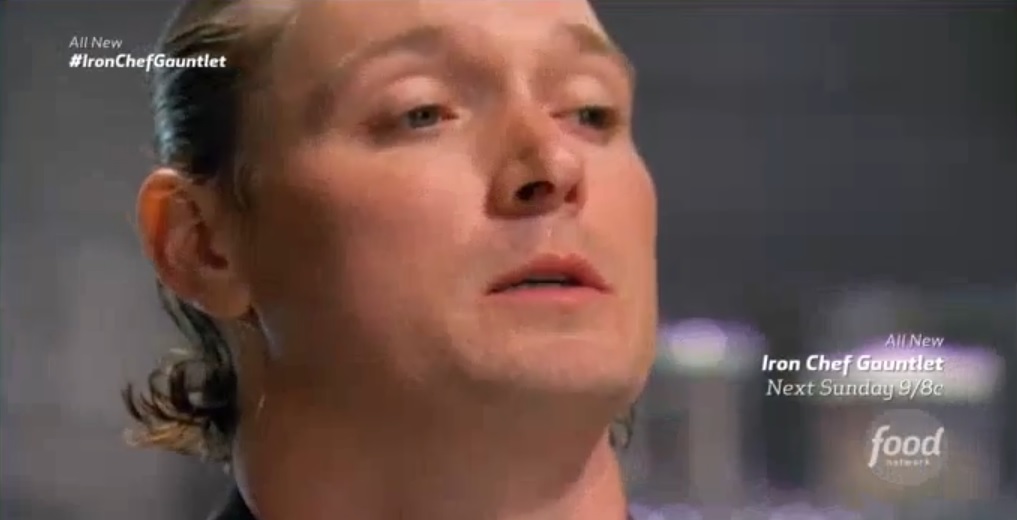 Alton announces the first round winner:

And your first round loser? Sigh…

And Dady, of course, gets to choose Nakajima’s Secret Ingredient Challenge opponent which is…

Nakajima’s on the verge of being knocked out again…I can’t fucking watch…(hides face behind hands…opens up fingers slightly, looks through them)…

Both competitors are thrilled: Nakajima says there are “too many dishes” one can make. Izard feels the same way, calling the food “a blank canvas”. We’re off and running…Izard is apparently working with chicken liver and chicken feet while Nakajima picks up a couple chickens, one of which is completely black in color.

Meanwhile, Chef Dady is nervous watching, hovering, glaring at the chefs and he just talks and talks…and talks:

Nakajima gets cocky (as he always seems to) and says that Izard might “deliver”…but it’s more like she’ll “deliver him to the next round”.

All the while, Izard is ready to go home and beats herself up for not being as great as Nakajima…and I’m telling you this isn’t ending well. 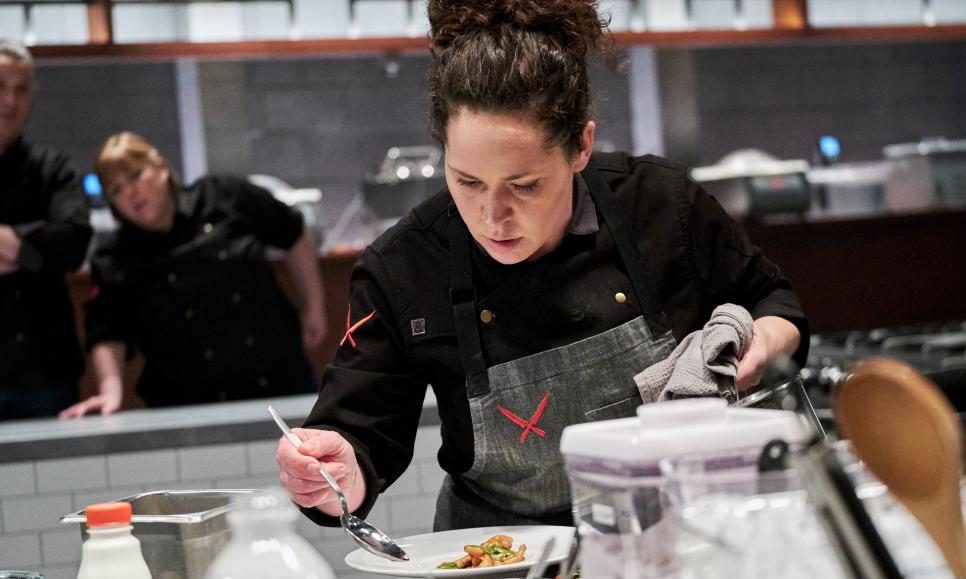 Nakajima does meatballs and a pickled chicken salad and skewers while Izard does the chicken feet and her ice cream.

When it’s finally over, we go to the tasting with this week’s judges: Iron Chef Cat Cora and Culinary Scientist Ali Bouzari. We begin with…

Izard feels as though Nakajima got much higher marks for his dishes and that he’s been eating everyone as of late. She hopes to still be here when this is over.

Both chefs return for final judgement. 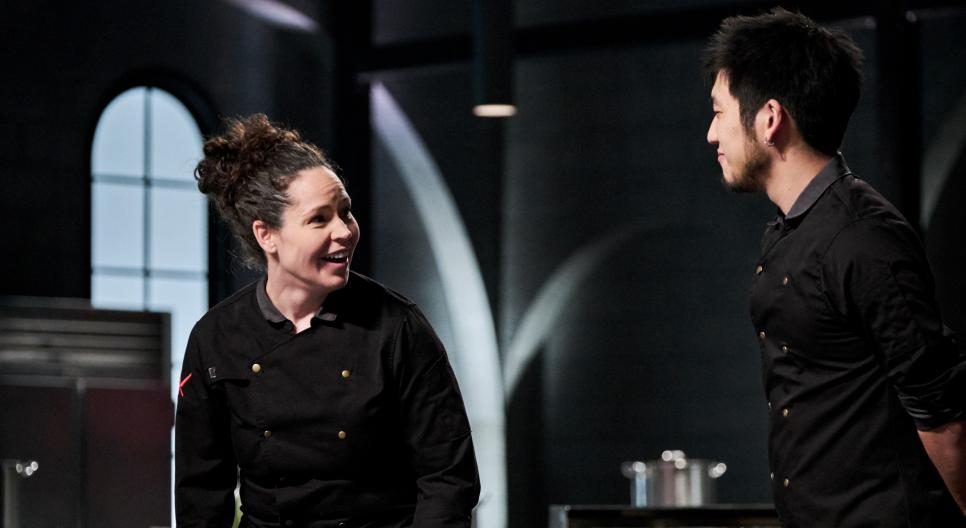 So, Nakajima is going home. And that’s that.

Let’s recap here: Shota Nakajima, one of the most creative and Iron Chef-worthy chefs on the show just lost to one of the most meek and boring chefs on the show. The judges, Alton Brown and every other chef look at him with their jaws on the floor. Yeah, he’s basically Morimoto: The Second Coming, but that’s not the point. He’s inspired. That’s what’s supposed to count here. Tonight, the judges called his ideas brilliant and were blown away by his originality and technique with making a couple of his dishes while dumping all over Izard for her lack of originality and vision with her “bowl full of chicken feet” and her “lack of adventure” with her chicken thighs. They commended his plating and crapped on hers. They thought his dishes were flavorful while hers were so-so.

How in the holy hell did Izard beat Nakajima? Seriously. I took some heat a couple weeks back for saying that this thing was “rigged”. This episode puts some weight behind my accusation.

Dady won his first contest today with a totally unoriginal dish that was plated nicely. Izard covered a fucking rib in chocolate and peanut butter, then piled a bunch of crap on top of that as if that would make it more special. Grueneberg sits there making pasta all day and all night while grinning as if she’s being held at gunpoint and proclaiming that she’s “the queen of pasta”. And, yes, Nakajima basically made something you’d find at Wingstop, only with shrimp — but he made up for it with three incredible dishes at the end. Izard threw chicken feet in a bowl and called it a day. She made chicken thighs and just piled them on a dish like she was working at P.F. Chang’s. The only thing done right was her ice cream — and she wins?!

This is why Iron Chef America became boring: the complete lack of creativity with regard to technique, flavor and presentation. The Food Network has slowly become the Chopped Channel. Every single show is some convoluted competition thing. It’s become a network where chefs flail around a kitchen for an hour, while Guy Fieri is obnoxious, Alton glares and pretends to be overly quirky and tells people that they suck if they can’t make meals out of rice noodles and bubble gum and snotty judges, with their needless snobbery on overload, crap all over dishes for not being perfect when they can’t possibly be perfect given the shitty ingredients these people are forced to use.

If the show’s editing and judge opinions are to be believed, Nakajima should have won this contest.

Nobody remaining makes me say “wow”, except when I’m saying it while I shake my head at them.

I will finish these recaps (there are only two left) but I sincerely hope none of the three chefs go on to join Iron Chef America because nearly all my interest in this show has just died.