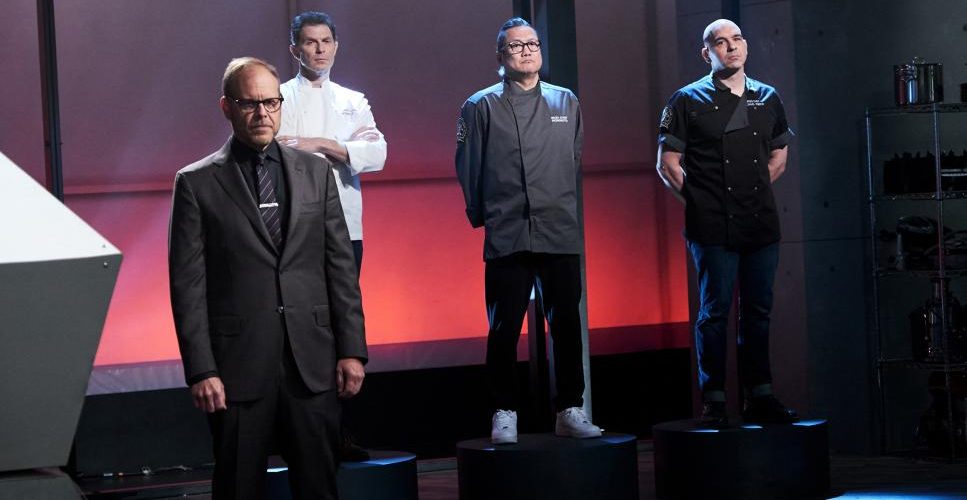 Here we are at the finish line for the first season (and, hopefully, the LAST for a long while) of “Iron Chef Gauntlet”. All the other chefs are gone and there’s one remaining who will run tonight’s “Iron Chef Gauntlet” against Chefs Bobby Flay, Michael Symon and Masaharu Morimoto.

In case you’re not caught up, your winning chef is… 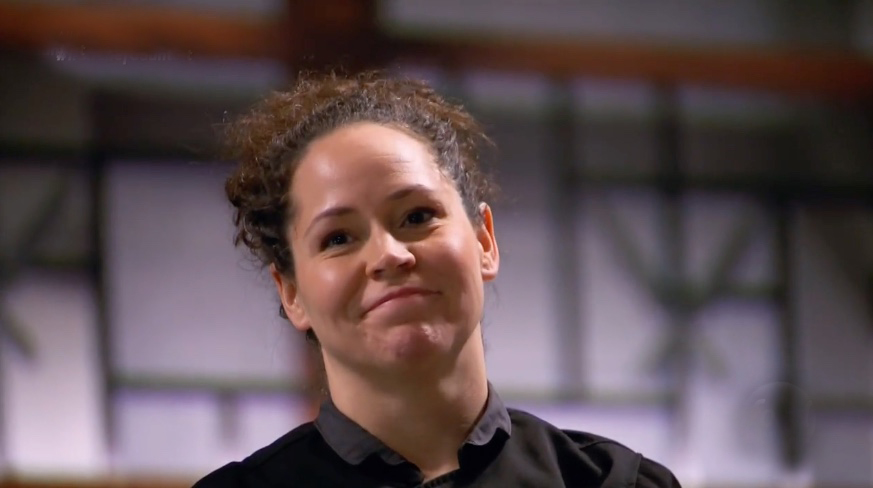 Izard says her journey is a rollercoaster and she watched this show growing up. She wants to be the next Iron Chef.

Alton outlines the rules of the Iron Chef Gauntlet:

Izard says she didn’t come this far to lose. 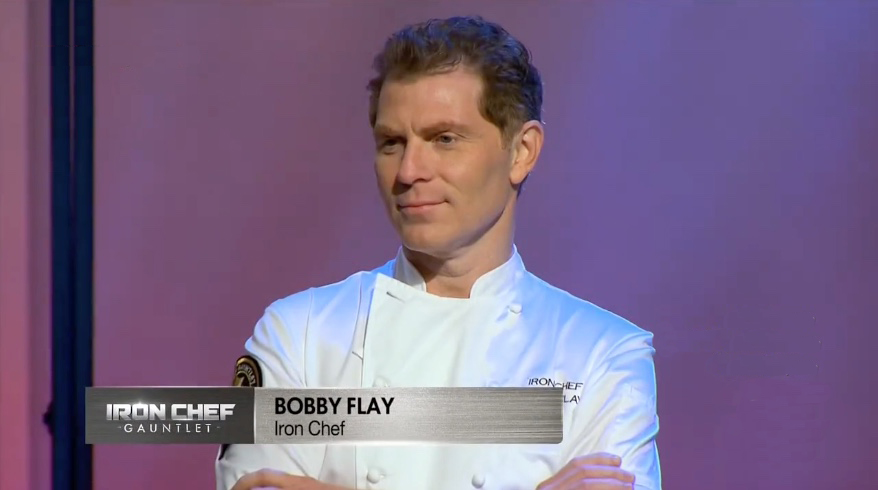 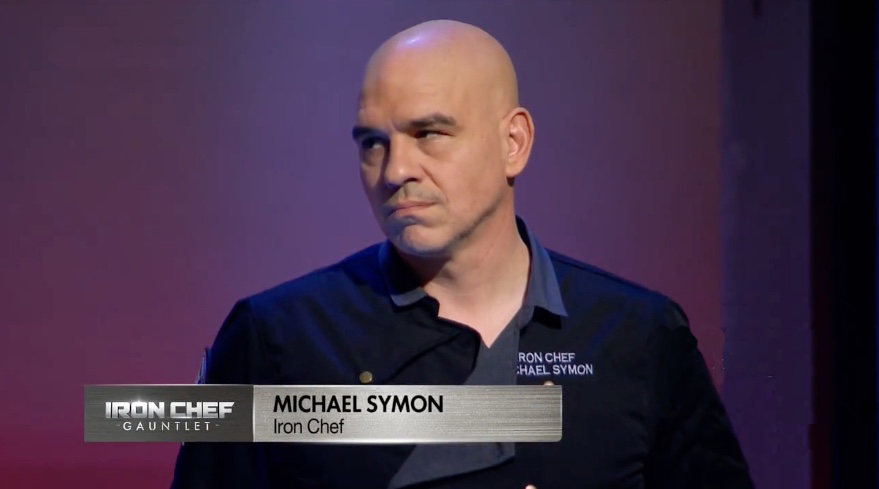 Izard runs down the IC history for us:

Hmmm…wonder who’ll be her opponent. I don’t know…it might rhyme with “Hobby Clay” — but, WAIT!!! Alton says that the order of which opponents she faces is up to HER!!! So, HA! She wouldn’t pick somebody who knows what to do with peppers and who might produce great pepper dishes that will–.

The camera zooms in on stock footage of Bobby Flay wearing a black Iron Chef jacket rather than the white one he’s wearing because Food Network is apparently poor and can’t afford to shoot new footage.

Flay steps off his podium and says “I love peppers.” 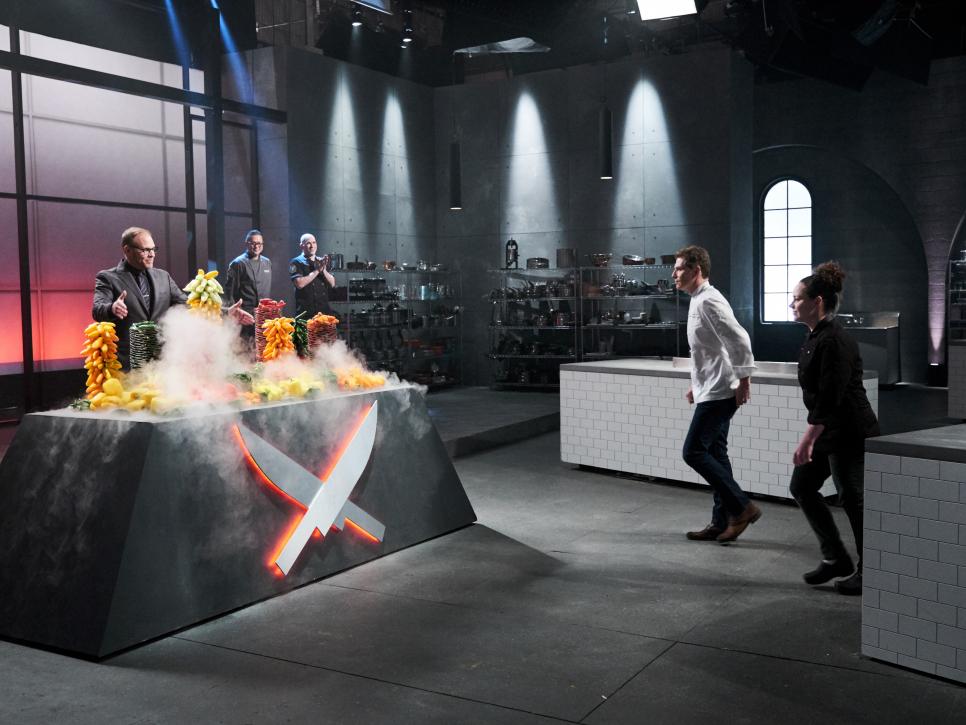 Michael Symon says that Izard’s decision is gutsy because Flay is the pepper master — but she went right for him.

Alton sets the timer at 45 minutes and gives us the requisite “Allez Cuisine!” and we’re off with the chefs grabbing peppers while Alton pretends to know who has what advantage by the peppers chosen.

Izard says the it’s all about the use of the ingredient and she will use as many peppers as she can. She’s going toward a “taco” of sorts but something “Japanese”. Flay, meanwhile, is roasting peppers and will do a Chile Relleno of some sort because he’s not even trying and this network is hellbent on installing Izard as an Iron Chef. Flay says that anyone can make a pepper dish but nobody seems to know that each pepper has actual flavor. He’s going to use other vegetables to match the flavor and heat of each pepper. 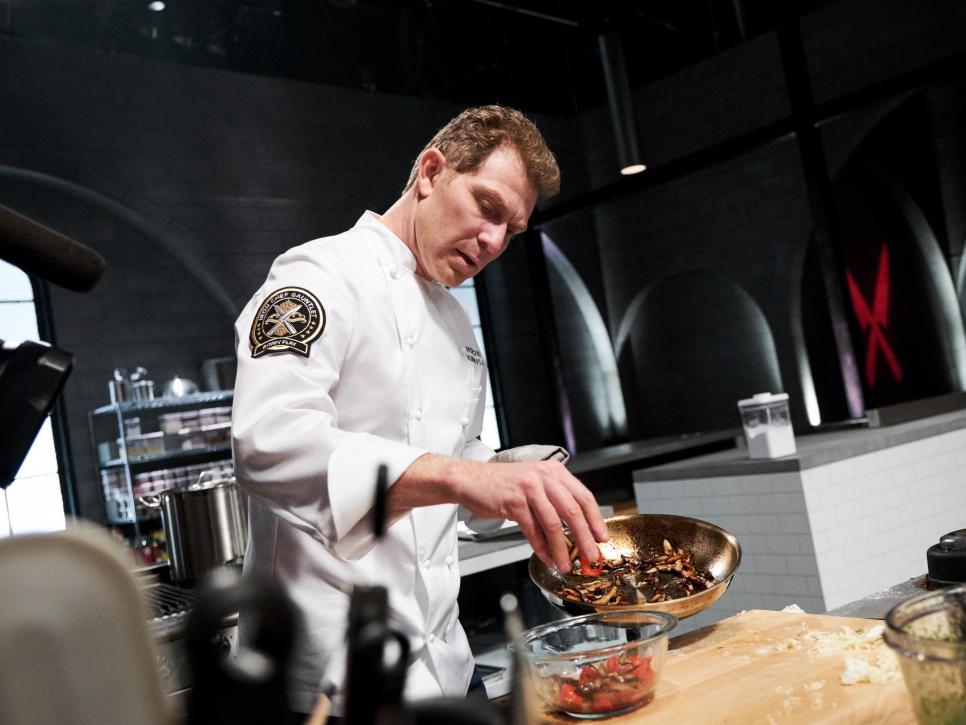 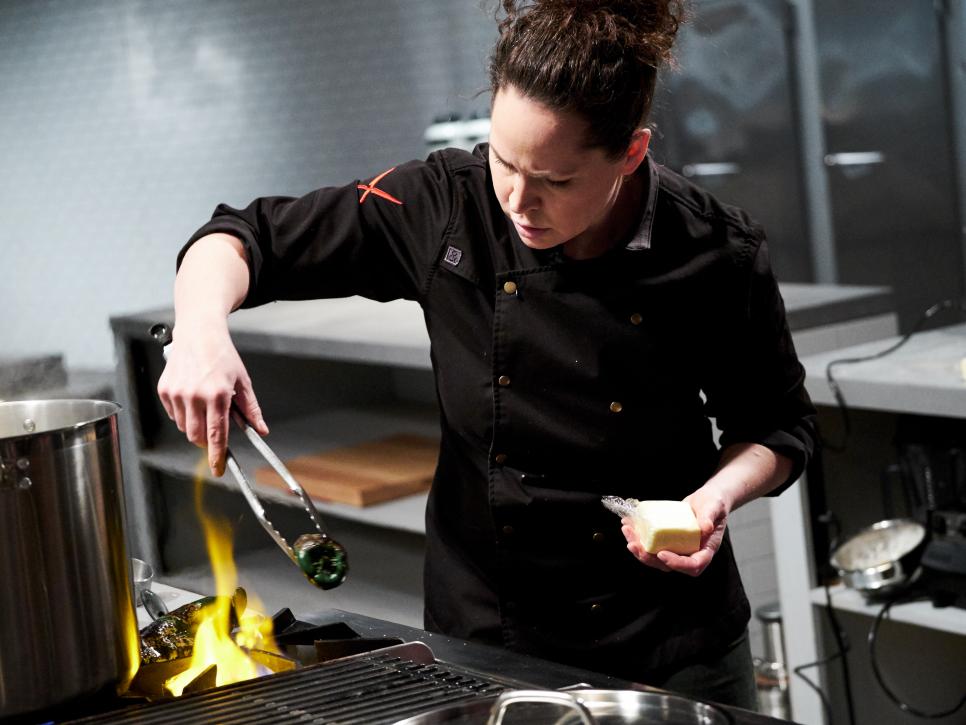 Flay says that Izard seems fearless and that’s something he admires because he had to beat Morimoto to become an Iron Chef.

Alton visits Izard and asks if she can take Flay. “Hell, yeah!” she says. “I can take him.” Alton likes that.

Flay mixes his pesto with cheese while Izard coats Kobe beef with a pepper marinade. Flay stuffs his peppers and dredges it in rice flour.

Alton counts down from one minute which was, literally, 15 minutes one minute ago but we have two more of these battles, so it’s time to hurry up.

Both chefs plate and we’re going to judgment:

Izard says that she probably lost to Flay while Flay says he’s happy to sit this one out and watch her take on the other two guys.

Izard comes back in for her second challenge.

Alton reveals the ingredient is…

Gee…wonder if she’ll choose Symon…nah. She’ll want to go a different route and choose Morimoto who has a seafood-based cooking method and that would be sma–. 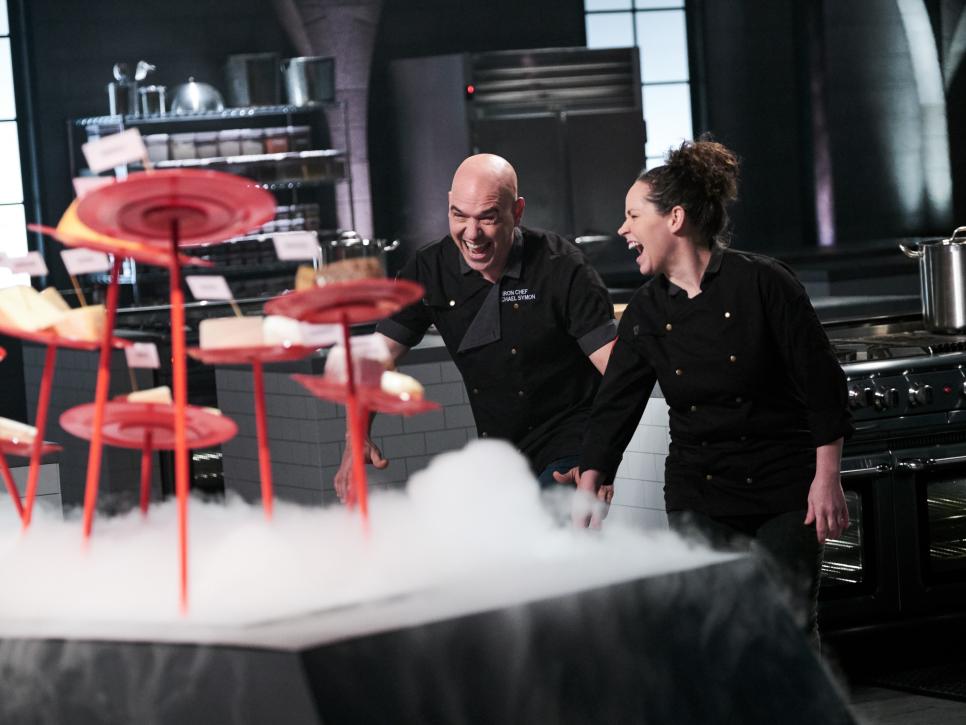 Then she beats herself up for her choice, for chrissakes.

Symon commends her for, essentially, being gutsy (or “stupid”, as Alton refers to it) and Morimoto just sits there and prays for fish for the final round.

With 45 minutes on the clock, the battle begins.

Izard is going for Blue Cheese Ice Cream which, look, sounds great for foodies but, come fucking ON, that’s far too simple. Even Alton says she should have chilled her mixture. 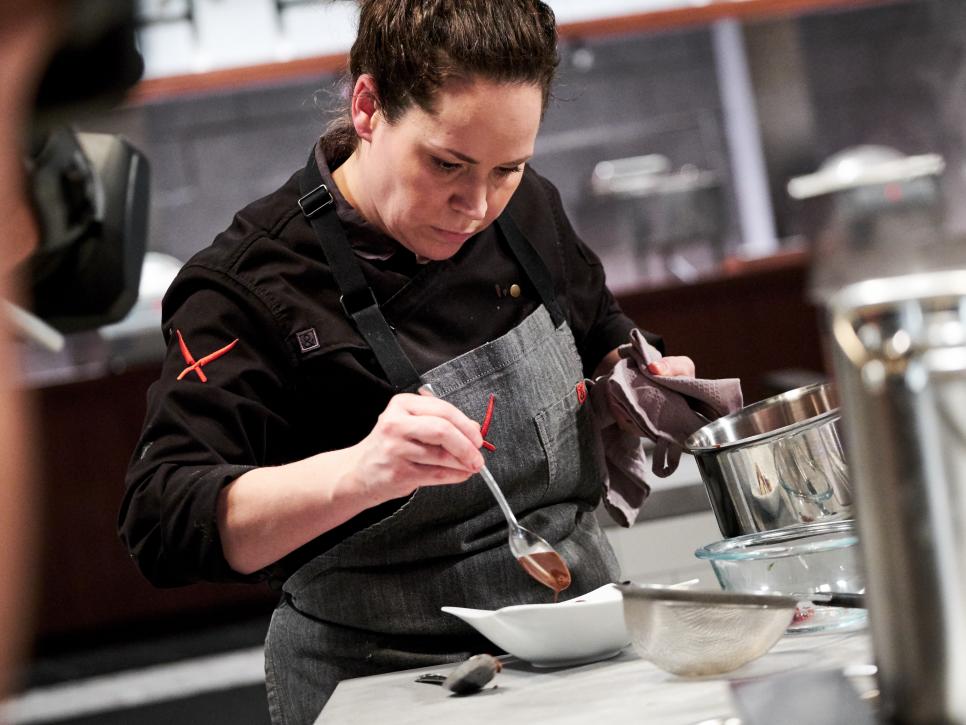 Izard tries to trash talk…or meekly asks “You OK over there, Chef Symon?” It’s so hard to tell with her.

Symon likes the filling for his dish while Izard is chopping chocolate and beets for “garnish”. M-kay. Alton tries to ask her what she’s thinking here, then goes to Symon who says he’s making dishes that are “full of surprises”. The two slam their counters because they’re MEN!!!

Izard checks her ice cream and it runs out of the machine like water…and it’s too salty. So she adds more sugar. She tries to get the ice cream mixture into the machine but can’t get it off the fucking spoon. Then she freaks out and says she has no idea what to do. FOR FUCK SAKES, GET ANOTHER SPOON TO SCRAPE IT OFF THE MAIN SPOON! You don’t even have to be a chef to know that!

Michael Symon is making a ravioli pasta dish. What, did you think after Grueneberg was eliminated that you got away?! Nope.

He starts making the ravs — then throws every single on of them away…what the…? Symon explains that it wasn’t good enough so he’s making more pasta. Symon: “I’m sweatin’ like Jose Garces over here!” Nice. 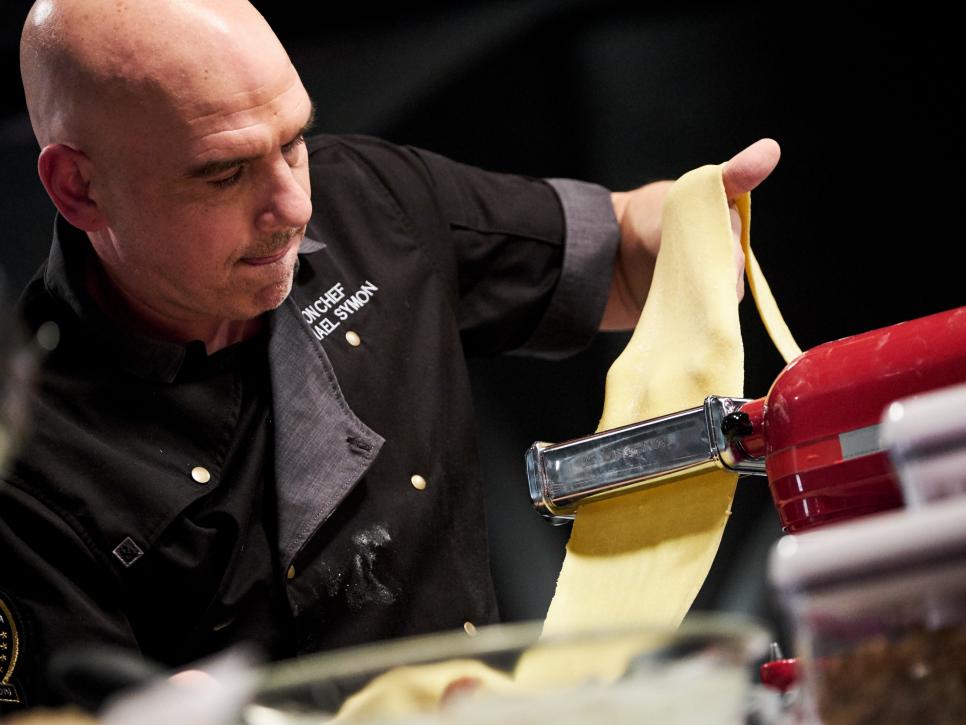 Izard’s ice cream seems okay this time and she puts it in the freezer so that it will take shape. Moments later, it’s ready to come out and she plates everything.

Symon does likewise and it’s time to judge…

Izard has no idea where she stands right now. She’s ready for the final round.

Iron Chef Morimoto is ready to cook and comes down to greet Izard.

The last Secret Ingredient is…

Gee, that was totally coincidental. Peppers against Flay? Cheese against Symon? Fish against Morimoto? TOTALLY NOT FIXED. 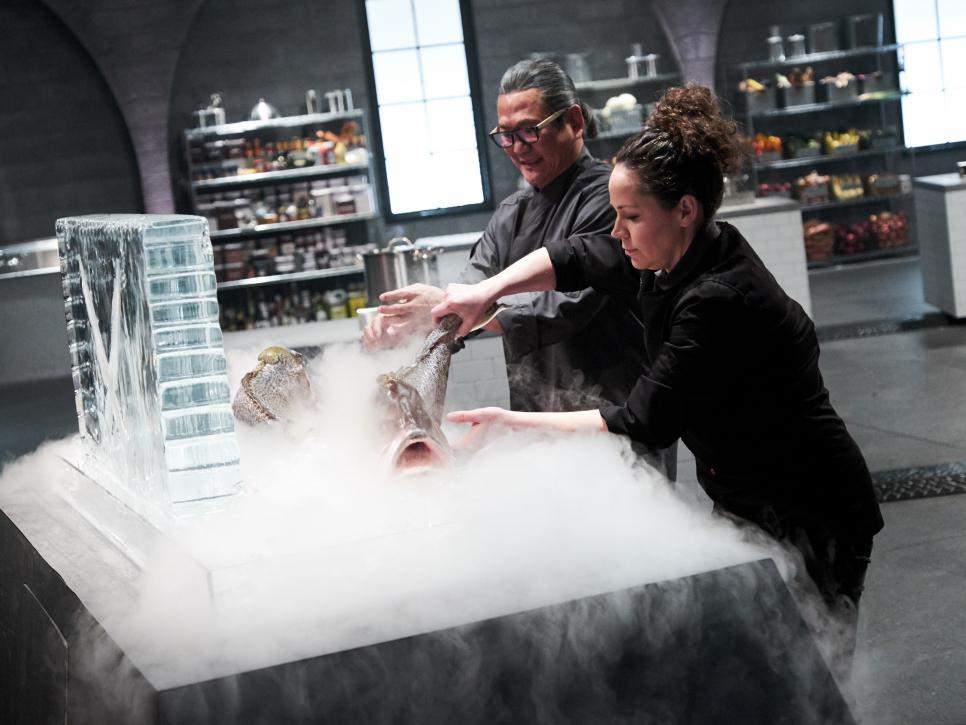 Izard cooks up aromatics in a pot with soy while the fish goes in a food processor. She adds some flour. She’s making noodles. 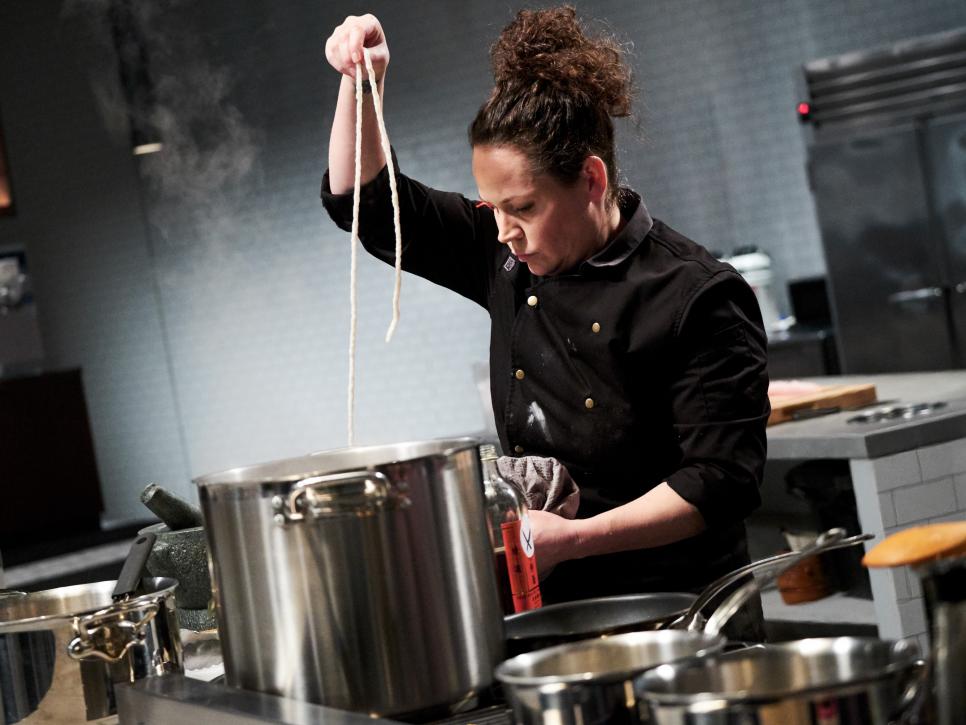 Morimoto is using nearly every single part of the fish to make his dish, steaming it and making soup. 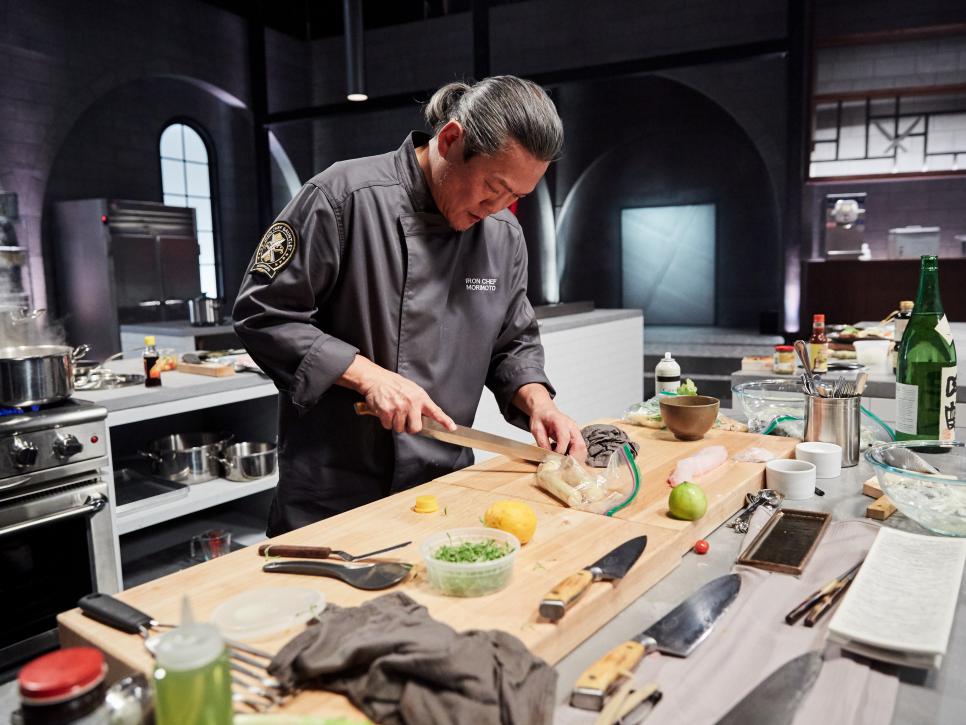 Alton goes down to talk to Izard, getting in her head. Then he visits Morimoto who just tunes him out and chops stuff.

Not to rush this, but they’re already at two minutes. The two begin plating.

Morimoto has made FIVE FREAKIN’ DISHES??? What the…? He explains: “I made five dishes! If I had fifteen more minutes, I’d make EIGHT!”

Izard is stunned and says that she’s running against the best, but that her dish is HER and represents her.

We’re at the final judgement round. Here we go…

I guess the last two dishes were one dish. And I’m not really sure why Morimoto was allowed to make that many dishes but the show pretends like that’s cool.

The final judgement is here.

Izard enters the kitchen and she says she’s proud of everything she made.

Alton commends her bold approach to each and every battle. He reads the scores.

Of course she did. Of course she beat Michael Symon and Masaharu fucking Morimoto while just barely losing to Bobby Flay. So, she’s an Iron Chef. Ho-hum. Did you have any doubts? 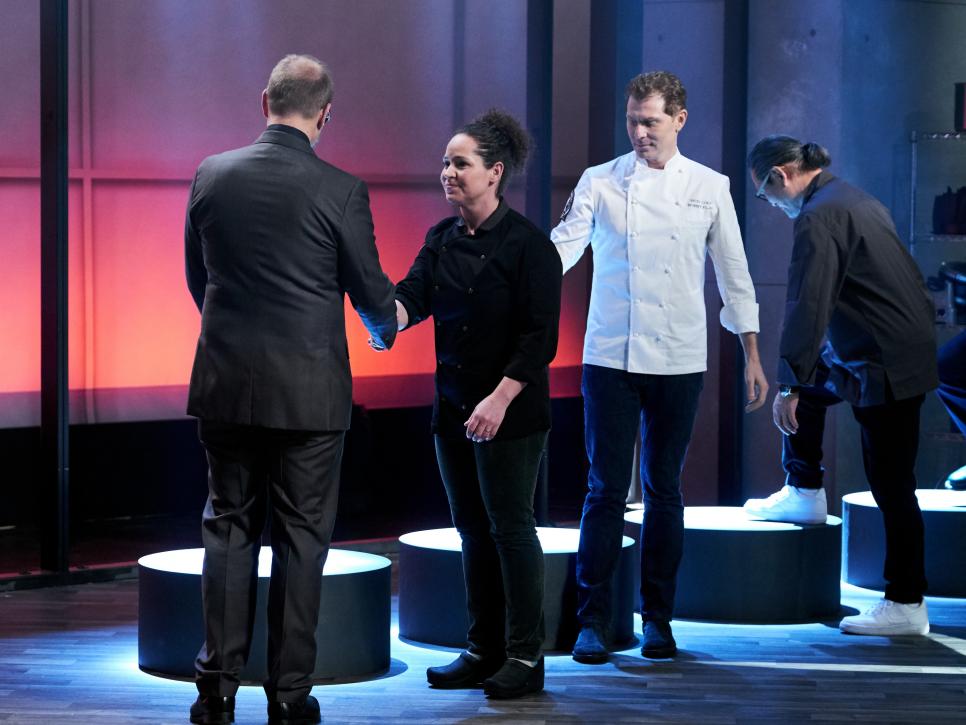 THOUGHTS: Safe, boring, who cares? It would really be to Food Network’s advantage if they went back to the “Next Iron Chef” format instead of continuing with this. Realistically, a format like this is going to give you the rookie win every single time because the TV audience has invested too much for that contestant to lose and a rookie loss would render the entire show meaningless.

And, yes, Izard is as boring as her cooking. She’s the most dull Iron Chef since Jose Garces. Blue Cheese Ice Cream? The Cheesecake Factory can do that and make it just as good. And I detest that restaurant. I will never understand why Food Network viewers fall for the scam that is this network. It’s insulting.

Anyway, love it or hate it, Izard is an Iron Chef. Yay?