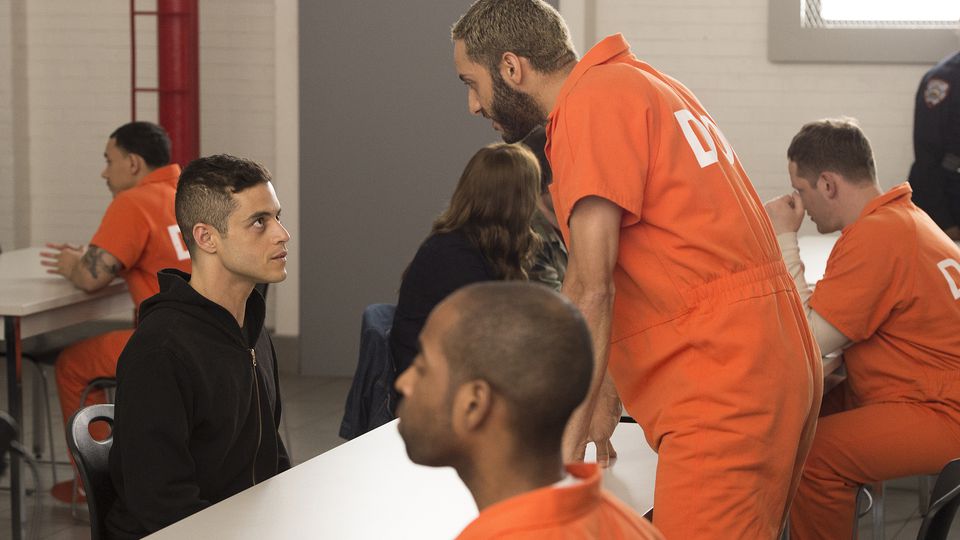 BEFORE WE BEGIN, LET IT BE KNOWN THAT THERE ARE MASSIVE SPOILERS OUTLINED IN THIS REVIEW. IF YOU HAVE NOT SEEN THIS EPISODE, STOP READING NOW.

“eps1.5_br4ve-trave1er.asf” revisits Fernando Vera, Shayla’s former drug supplier who was tossed into prison after Elliot turned him in for Shayla’s rape in the first episode. Last week, Vera put two and two together and figured out that Elliot was the anonymous narc that put him behind bars. He’s not mad. He admires Elliot because Elliot has power — and he wants it. That’s why he arranges for his men in the outside world to kidnap Shayla and presents Elliot with an ultimatum: he has until midnight to free Fernando from prison using his hacking skills — or Shayla’s dead. For the past half dozen episodes, we’ve seen Elliot get into trouble and find his way out with ease while smugly and coldly reminding everyone watching that he can correct injustices with a few keystrokes and mouse clicks. The situation with Vera should be a walk in the park for him. Except it isn’t. Here, we find Elliot stripped of any control he thought he had. The safe little bubble he mocked the average citizen for hiding inside of has been burst. And, worse yet, nothing Elliot could have done in the past would have led to a different outcome.

If only Elliot could see it.

At the beginning of the episode, Shayla and Elliot have breakfast together — but neither one can bring themselves to touch their meals. This isn’t a date. Far from it. This one-on-one is a privilege, a visit not dissimilar to one we witness later on between Elliot and Fernando in prison. Vera’s men watch Shayla as Elliot apologizes to her, tells her he’ll fix it, tells her he’d do everything differently if he could just go back in time — but Shayla’s already accepted her fate. She can see the writing on the wall and she’s at peace with it. Mr. Robot is a little less delicate with the inevitable, declaring the situation a “zero sum game” since Shayla was toast when she started working with Fernando. Mr. Robot pleads with Elliot to let Shayla “become a memory” — but Elliot is blind to this — and that’s unfortunate. Angela visits him, interlocking her supporting story with Elliot’s. She declares that she’s got an idea that might “change the world” — and then immediately begins doubting herself, saying her idea is completely stupid. Elliot hears her out despite the fact that he’s running out of time. So he smiles and nods with her story. “Tell her what she wants to hear,” he says in his voiceover. So he does. He believes that she should trust her instincts and believe in herself.

It gets even worse when Fernando’s younger brother attempts to murder Elliot in cold blood. Turns out his brother doesn’t want Fernando out of prison because Fernando will murder him. Elliot calmly explains that Isaac’s days are numbered. If he murders Elliot, he’s only prolonging his own death. If Elliot springs Fernando, he’ll get the chance to fight for his life. Isaac listens to Elliot and lowers the gun. In this moment, we all believe that Elliot has regained the upper hand and that he may be the victor in a previously-thought-to-be-unwinnable situation. And that’s why, despite all this lead-up, it’s beyond crushing when Shayla turns up dead anyhow, in one of the most visceral and real moments on this show. And it destroys us even more when we realize that shes not only dead…she’s been dead for hours. Her throat cut and her body stuffed in the trunk of the car Vera’s men used to drive Elliot around. You’d think, at that point, the show would grant mercy on the viewer.

The entire scene is in one take. The trunk opens, Elliot realizes what he’s seeing and he says nothing. The shock sets in as he searches his brain for answers — and can find none. The realization that he was wrong and that Mr. Robot was right all along…the realization that Fernando is a stone cold psychotic with a warped sense of honor and that Shayla’s untimely death was foreshadowed the moment he killed his brother, Isaac, after just ten seconds of freedom…all of the hurt and anguish just culminates until we get the final shot of Shayla’s dead eyes…the entire package, from start to finish, is nothing but a giant box of intense pain. You feel it. The entire situation is a dark parable, a lesson Elliot needed to learn. For all his talk, Elliot is more human than he thinks. He can be hurt. There are people he loves and those who care for him. He is as connected to the system than he thinks, blanketing himself in its warmth. It’s sadly ironic.

When the “Mr. Robot” started, the exact words at the end of my review were, “The cast and crew has crafted a nice indictment on the wealth gap and I’m very much interested in seeing where it goes — even though I’m sure it won’t come close to topping the promise shown in the pilot.”

I am more than happy to admit how wrong I am about this show. Yes, the opening episode feels a bit like an experimental student short film with a budget, but it has managed to completely evolve into one of the most stylish, most sophisticated shows on television.

If I had one gripe about this episode, it’s that the main story was so strong, it drowned out Tyrell Wellick’s bid for the CTO position at Evil Corp, a minor — yet, effective — moment on the show where we learn that the CTO’s wife told her husband all about Tyrell’s creepy bathroom visit. Scott doesn’t care. He just uses it against Tyrell, deeming him a failure. He taunts him about “getting off on watching people urinate” and even unzips his pants, hanging out in front of Elliot. Like Elliot, Tyrell is asked to accept a very hard truth: he will never be CTO and there’s nothing that Tyrell can do about it. The whole scene is brilliantly executed and is the very literal picture of two alphas comparing penis size to find out who “the bigger man” is. The contest is capped off brilliantly when Scott points out that the watch he’s wearing would “pay off the mortgage” on his two-bedroom apartment, causing Tyrell to shrink and retreat. Normally, we’d remain fairly stone-faced through these moments on the show but, this week, it serves as a moment of levity and dark comic relief.

This episode is the best of the series’ run.

It may also very well be the one that will make several viewers ask their friends and family if they’re watching this show.

And well they should.