MTV’s ‘Scream’ is Dead on Arrival 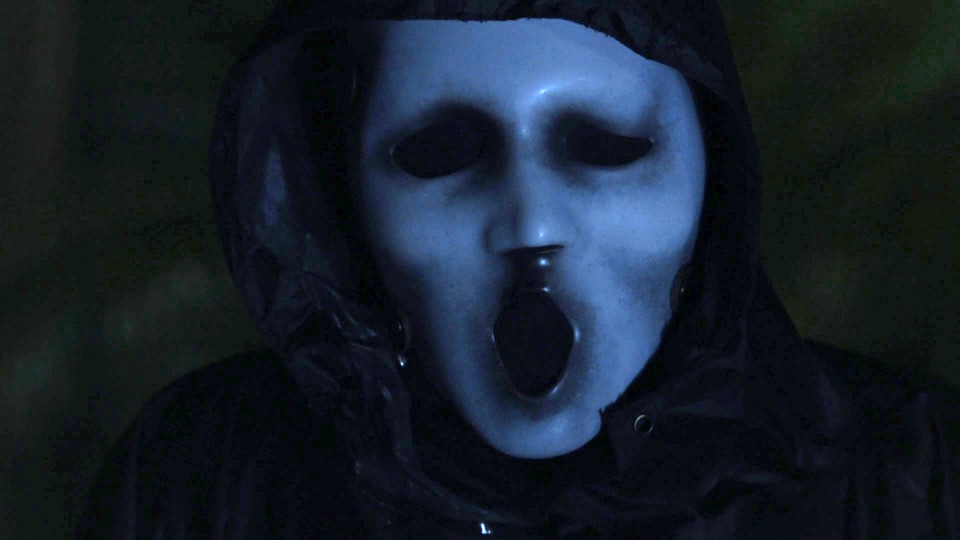 “[My dog] is a trained attack Pomeranian and she will gut you on command!”

That’s an actual line from “Nina”, the “Drew Barrymore” of this, the ill-conceived pilot episode of MTV’s latest attempt at a horror cash-in,  Scream — and if the opening episode is any indication of what we should expect, this series will quickly be put out of its misery

The announcement that Scream would be resurrected was met with indifference by the horror community. After all, the third film of the franchise, though incredibly vaporous, sufficiently put the story of Sidney to bed and the fourth movie…well…we don’t talk about that. So, when the show idea was put out there, the only appropriate question was “why?”

When MTV answered that question with a resounding metaphorical middle finger by hosting it, you could hear the groaning and the resounding slap of a hand meeting faces across the country. And by the time we learned that writer Kevin Williamson and the franchise’s father and veteran horror director, Wes Craven, were going to be as far away from this as possible, the series was all but cancelled in the hearts and minds of horror fans the world over.

My colleague, Keith Kuramoto, once used to poke fun at me for finding some pleasure in another MTV horror re-boot, Teen Wolf. Scream makes that show look like Breaking Bad.

“Emma” (Willa Fitzgerald) is our “heroine”. But you can’t possibly know that. The only way you’d be able to guess that is she’s shown most of the time. She feels bad because her friend, Nina (Bella Thorne), has been murdered. Who did it? Some person wearing a heavy black cloak and a white mask. “I feel shock, mild interest, but not grief,” says Noah, the “Randy” equivalent of the series (played by John Karna). And who can blame him? The audience, just ten minutes prior, had to sit through Nina serving herself up on a silver platter and putting the apple in her own mouth for garnish. She got about ten text messages that, more or less, would be cause for anyone to call 911. Instead, Nina’s content with receiving about a dozen videos of herself undressing at close range. And what does she do? Keeps undressing, goes outside, yells that she’s out there and gets knifed in the back. This, after she attempts to dial 911 using iPhone’s “Siri”. “Dialing Pottery Barn!” Siri replies with glee.

And, at that point, you’re waiting for this episode to end so you can watch the dozen other shows on your worksheet.

For what it’s worth, there’s a plot. Or part of one. It’s about lesbians making out. In fact, the show opens with lesbians making out. It’s not presented as hot, either. So, I guess that’s nice. But they’re making out. Next scene? More making out. Next scene? People discussing the lesbians making out. Also, Emma’s boyfriend is a complete dick of a character who perpetuates the bullying culture that goes on at the high school they attend. They filmed the heavy petting seen in the opening reel to…make some sort of a point that girls kiss, I guess. It’s presented as “bullying”. Somehow. I don’t know why. The messages are so mixed. To explain: Emma’s boyfriend (Connor Hall) is like TMZ. He goes around with his buddy, Tom (Jake Fitzgerald), and videos students doing stuff like kissing and then puts it on YouTube, violating their privacy. And Emma allows it, being the sweetheart she is, which makes no sense. Whatever.

So Emma, out of pity, invites the lesbian chick to Nina’s “wake” which is, of course, an “Irish wake”. Which is to say, it’s an excuse to drink heavily, do drugs, make out and fuck without a care in the world. Does the killer make an appearance at the party like in the first movie? Of course he/she does. But it’s subtle and not frightening in the least.

In fact, the entire show isn’t scary. And isn’t that one of the points of a horror series?!

Look, I’ll be the first to admit it: jump scares suck but they’re also a necessary evil. They’re to horror what drops and loops are to a roller coaster. Done right, they thrill you and you age 25 years in one second. Done wrong or too much and it comes across as cheap and low-brow. But, come on. I’m watching a re-boot of one of the more well-known horror franchises of all-time. I expect some goddamn scares here.

And it’s not that I don’t scare easy. There’s no suspense to speak of. There’s nothing that’s even “creepy” beyond the weird “Daisy” chant coming from Lakewood Lake (I’m just guessing that’s what it is because they don’t tell you what the body of water outside Emma’s house is called but the town’s name is “Lakewood”, so…) and even the “Daisy” bit is ripped off from 2001: a space odyssey, which isn’t even in the same genre.

It’s all a shame because the re-design of Ghostface is pretty sweet — but showing up when he feels like doesn’t lend any real drama to the proceedings. For a show that’s supposed to be adapting Scream, the lack of Ghostface is an odd play.

Take, for instance, a moment where Noah gets really freakin’ smashed and wakes up trapped on a raft in the middle of the lake bordering the aforementioned party house. When he attempts to swim across the lake, he’s presumably grabbed by the killer and dragged underwater and, instead of being scared, all I could bring myself to do was try to figure out the thought process behind this attempted murder. Try to keep up here: Noah got shit-faced drunk, passed out on the couch and ends up on a lake’s raft due to some bullies with a grudge. And the killer is just hanging out underwater, ready to pull him under and drown him on the off-chance somebody ends up in the lake?! Even if you put on your thinking cap and say, “Maybe one of the bullies was the killer”, you’d still have one of the most complicated, flawed and convoluted ways to murder somebody that you’ve have ever heard of. How long was the killer underwater? Are they just sitting in the dark, with near-zero visibility, freezing, wearing fucking scuba gear? Why didn’t they just grab and murder Noah earlier instead of putting him on the raft? In any case, the suspense lasts as long as the commercial break because SPOILER ALERT: Noah lives and we just plain move on.

The show really is this awful. Everything that Williamson and Craven created is severely undone, as if the characters they made fun of in the Scream films are trapped in this thing and they’re fighting against the script.

Nobody dies beyond Nina — and they could. The cast is that forgettable. In fact, Noah (in a heavy-handed attempt to be meta, just like Randy), explains that serial killers, especially those in a TV SERIES (WINK, WINK!!!) take their sweet time. Anyone could die at anytime — but nobody has to die in each reel. That isn’t the way it works here, he says.

Then why should I care? There is no character here that interests me and no storyline that would compel me enough to tune in next week to find out if the lesbian girl has a connection to Emma’s mom somehow or if Emma’s hot friend Brooke (Carlson Young) seduces her teacher (Bobby Campo who looks like he’s about Brooke’s age and that makes this even more sadly surreal) or if the…football team…wins a…game? What the hell is Noah smoking here? What does any of that have to do with anything?

Scream is, by all accounts, a failure, a colossal miscalculation. The question for me is no longer “why?” I know why.

My question is “Do I stick around and hope this gets better or am I wasting my time?”