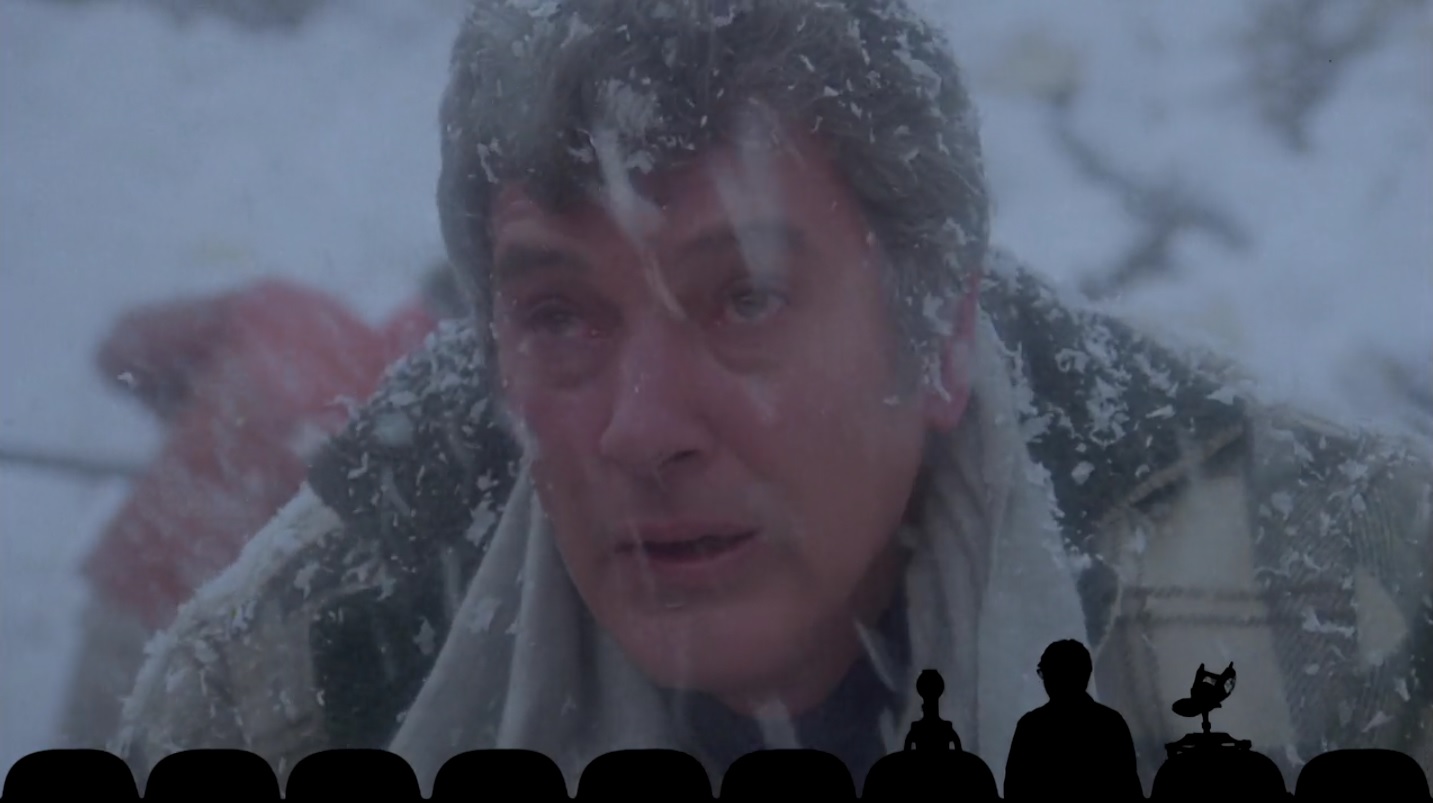 We’ve seen 60’s camp and we’ve been through 80’s awfulness…so what’s left? The 70’s! Rock Hudson and Mia Farros star in “Avalanche”…and I feel compelled to mention that Steven Franken from last week’s experiment, “The Time Travelers” returns here as “McDade”, a character who sounds like he should be sliding across hoods of cars and jumping into the air firing twin nines with explosions raging in the background…but, really, he’s just a grown-up version of the dweeby Danny. In any case, it takes far too long for the actual “avalanche” to actually happen and, when it does…well, some people are rescued while others are left for dead…but there’s champagne stuck in the ice so why not celebrate, right? Also, there’s this awesome love triangle which you’d think would be kinkier than it is, considering the time period…but, no, it’s between an airheaded Mia Farrow, a lecherous, overweight, elderly Rock Hudson (he’d seen MUCH better days than this) and a boring Robert Forster. It’s a good thing we moved on to 80’s, a time filled with Phil Collins, cocaine and the paranoia and feeling of impending doom brought on by the Cold War, huh? 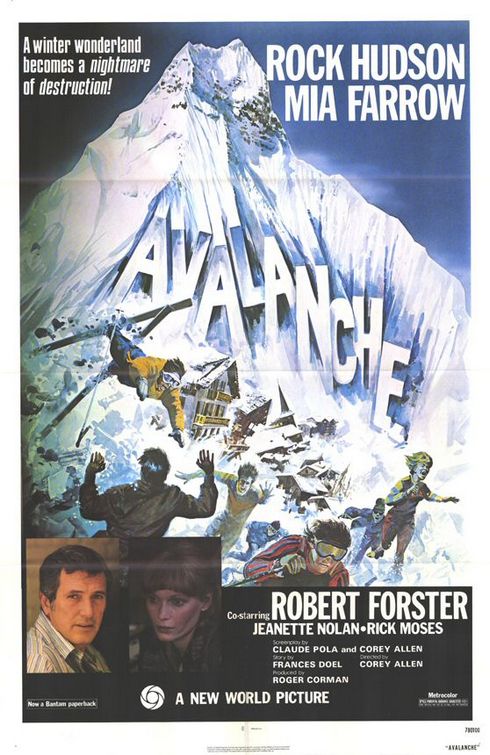 MST3K’s writers usually excel with this type of material. The 70’s mixed with disaster porn? Hell, films from the 70’s themselves always make for good watching. “Mitchell” was one of the show’s finest hours, “Laserblast” is one of my personal favorites, “Puma Man” is gold, the numerous Sandy Frank entries…there just seems to be a very comfy vibe when Jonah and the Bots take on the 70’s…except that, here, the riffing is frustratingly uneven for the second week straight. Most of the good lines come before the avalanche as Jonah and the Bots become accustomed to the characters and their motivations and there are laughs to be had as the boys attack Mia Farrow’s vapid nature, Rock Hudson’s dress habits (and penchant for “having lunch” seemingly all the time), and the different “lanches” leading up to the actual “avalanche” (Flags get blown over? FLAGALANCHE! A plane crashes on a mountain? PLANEALANCHE! A wolf howls in the background? WOLFALANCHE!) This is where they excel. During the avalanche and after it, however? The jokes become lazy and smile-inducing at best. We’ve seen better than this — even during The Time Travelers. It’s a bit of a letdown. But, even still, YAY STEVEN FRANKEN’S BACK!!!

Here are the gems:

(We see a rundown-looking ski resort)
SERVO: This is like if ‘The Shining’ was booked on Priceline.

(Doorman helps Caroline out of the car.)
CROW (as doorman): “Welcome to the 70’s, Miss Farrow!”

(Patrons in hotel are wearing heavy clothing and sweaters)
CROW: Everyone here looks SO flammable!

(David awkwardly kisses Caroline, then parts with her just as awkwardly, walking away)
DAVID: “Ok…”
CROW (as Caroline): It’s not you. I’m a wood elf. We don’t show affection through kissing, we exchange syrup.

(McDade and Florence climb through thick snow with Florence’s dialogue coming out stuttered and out-of-breath)
FLORENCE: In case you haven’t noticed…not only…are we outdoors…and knee-deep in snow…but we are…also…going UPHILL!!!
JONAH (as the movie’s director): OH, CUT! TAKE 15! DO IT AGAIN!!!

(The film suddenly and randomly cuts to a skier getting ready to ski.)
SERVO: Now, who’s THIS guy?! It’s becoming like a Marvel movie in here…

(Skier survives a small avalanche by inexplicably leaping into a tree. He whips his ski mask off and looks down at the avalanche he just escaped.)
JONAH: Mentos! The freshmaker!

(Mia Farrow is swimming in a heated pool during a cold front)
NICK: It’s cold out here. Aren’t you cold?
CAROLINE: Yep. I’m freezing! Come on inside!
JONAH (as Nick): “Inside?!” What, did you build a mermaid cave or something?!

(We witness a dance party. The people dancing are wearing awful-looking dated clothing.)
JONAH: Oh, 1978, you have so many crimes to answer for…

(The film randomly cuts to the raging snowstorm outside the party for the 5th time.)
SERVO: WHY do they keep cutting to the planet Neptune?!
CROW: I don’t know but I wish they’d just STAY there!

(Caroline and Nick run into one another.)
CAROLINE: Oh…are you leaving?
NICK: Yeah, I, uh…I’m ready to escape.
JONAH (as Nick): My jacket turns into a badger at midnight…wanna watch?

(Caroline and Nick walk through a huge snowbank outside as a wolf howls loudly off-screen.)
CAROLINE: What a wild place to live!
NICK: You think so?
CROW: Sounds like they’re in for a WOLF-alanche!

(Nick warns Caroline to be careful not to slip as she stumbles through snow and wind.)
CROW: This is why going outside SUCKS and is, frankly, overrated.

(Caroline walks into Nick’s place and closes the door behind them.)
JONAH (as Nick): So…wanna make fondue since it’s the 70’s or what-not?

(Caroline explores Nick’s place and looks at his photo equipment.)
CROW: You know, not like I’m complaining but, at this point, Gene Hackman was already halfway through the Poseidon…

(Nick goes upstairs with hot chocolate. Caroline waits.)
JONAH (as Nick): Careful, that photo enlarger has a hair-trigger, so you might wanna be — OH MY GOD, SHE’S DEAD!!!

(Outside, the ski resort’s flags start blowing down to the ground.)
SERVO: New World Pictures presents…FLAGALANCHE!!!

(David walks into the hotel lobby — which is covered in brown wood — wearing brown slacks and brown plaid.)
JONAH: Is everything BROWN or do I have retina damage?!

(Avalanche helps destroy the resort kitchen. The kitchen explodes and a woman dressed in a long sleeve shirt and green skirt gets thrown across a table.)
CROW: This kitchen has a CHEERLEADER?!

(Fire engines rush toward the scene of the avalanche.)
CROW: Here comes the fire department to put the avalanche out!
SERVO: That would…actually work if they used HOT water…

(A fire truck rips around a corner and loses its first aid kit.)
CROW: That wasn’t even caused by the avalanche! They’re just completely incompetent!
JONAH: They should change the name of this movie from “Avalanche” to just “General Catastrophe”!

(Police car skids and nearly hits pedestrian who flies into a storefront.)
SERVO: Oh, so, now we’re seeing collateral damage from the IDEA of an avalanche?!
(Cars and trucks smash into one another.)
CROW: What’s next, somebody cutting their finger on the newspaper READING about it?!

(Chaos after the avalanche as several people wander through the new snow.)
SERVO: So many new characters! It’s like the third season of LOST!

(Skier gets shocked by electric wire, then falls down off ski lift, emitting a goofy-sounding scream.)
JONAH: That’s a missed opportunity for a Wilhelm Scream right there! 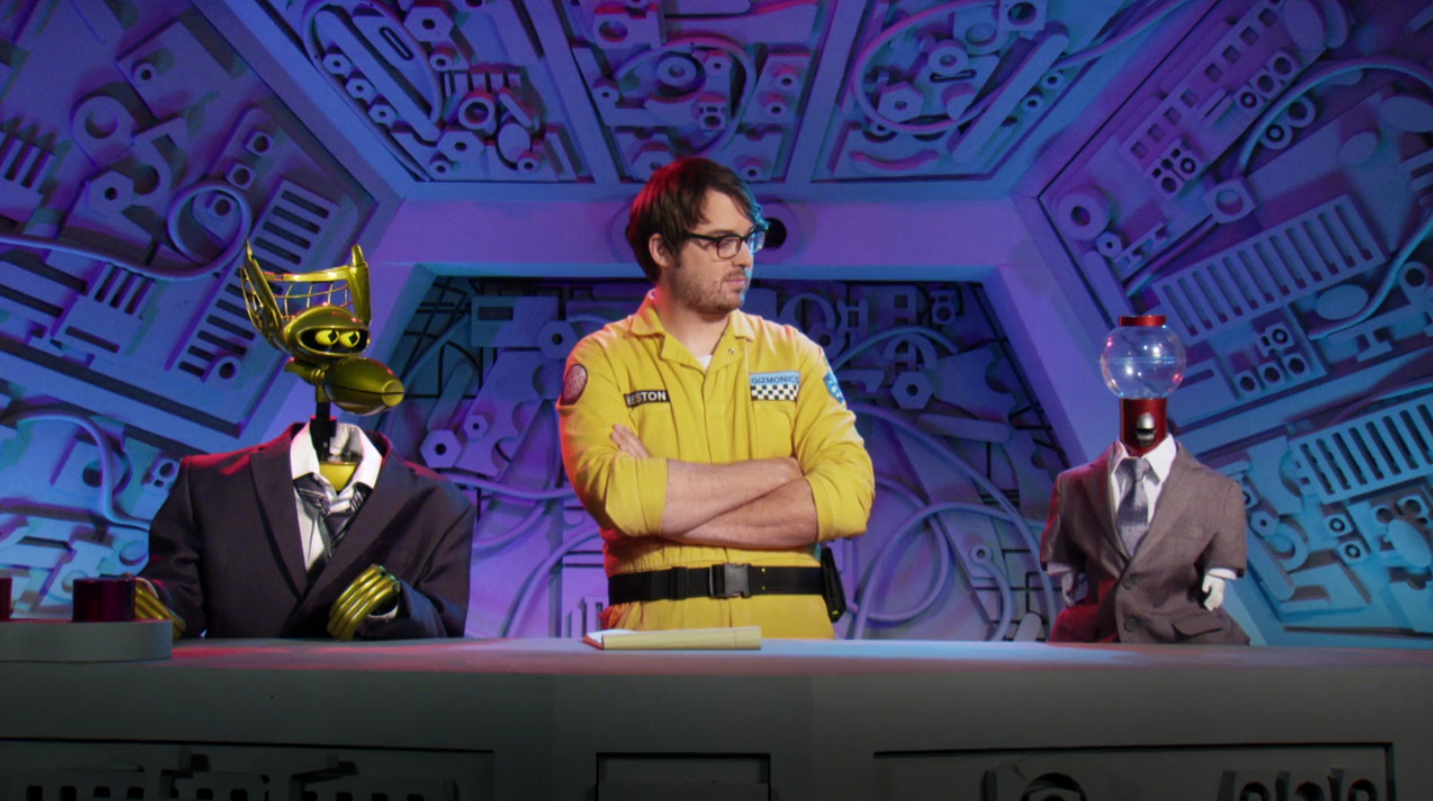 The host sequences are mostly fun. Jonah and the Bots paying homage to Rock Hudson makes for a hilarious sketch and runs in facetious juxtaposition to Jonah’s desire to “discuss 70’s light fixtures” which the Bots are nowhere near interested in doing because of their obsession with Rock Hudson and his character’s need to “surround a woman and eat her” while “purposely forgetting what she does for a living”. This is topped, however, by a wonderful sketch involving Kinga’s date with the uber-romantic “Neville”, played by long-time MST3K fan, Neil Patrick Harris. The two sing an adorable duet to one another which turns into a Fugue, of sorts, when Max joins in, longing to know why Kinga doesn’t love him like she loves Neville. Internet geeks out there will recall the two pining for one another on “Dr. Horrible’s Sing-Along Blog” and it’s a very cute “reunion”, of sorts, serving to finally show that Kinga has a softer side. The brilliance here is that the shoe is on the other foot: Kinga is the supervillain while Neville is just a sweet guy. The only bad thing I can say about it is the new MST3K’s penchant for keeping guest stars separate from the main cast. While there is the joke that the two are “dating without touching one another”, the three-way fugue would have worked even better has Harris been on the set with Felicia Day.

The other host segments fall flat. The show has a cold opening (which needs to go next season, if not this one) which features the Bots dressed in suits, imitating “Mad Men”. It’s rushed at 30 seconds, isn’t funny and lacks a punchline, something it has in common with Kinga’s movie distributors on Moon 14. It’s suggested that something is going on with Kinga’s liquid-based television, “causing the manifestation of apparitions” and other strange things but nothing ever comes of this and, thus, comes across as padding. The final sketch involves the names of modern disaster porn like “Sharknado” and “Lavalantula”…but it’s nothing more than the cast sitting there, reciting goofy names for a minute before the film pulls us back into the theater — though “Underground Coyoteprawn Meets the Tsunami Crab Squirrel” has a nice ring to it. 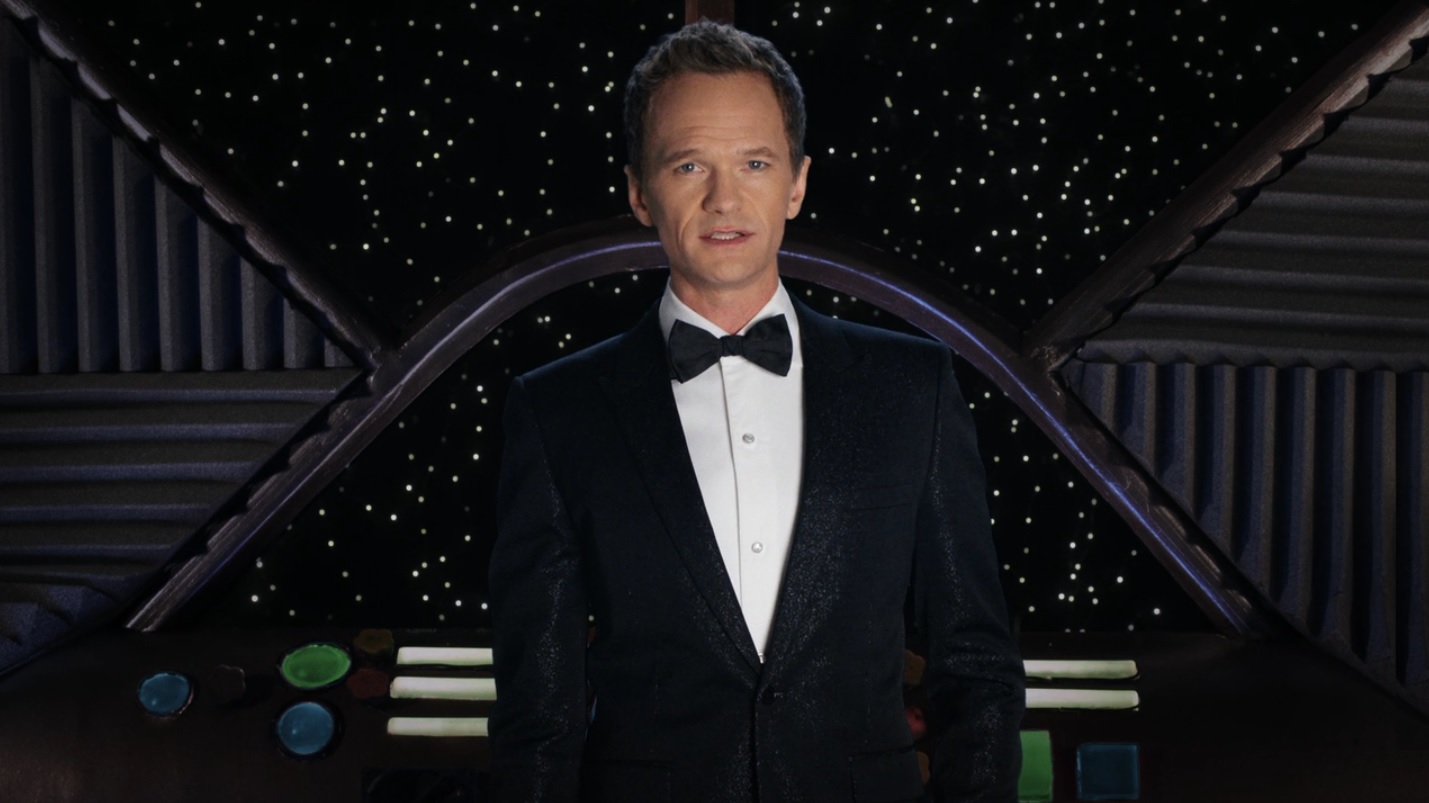 Another week, another standard episode of MST3K. As I said last week, “standard MST3K” is fine…but I do long for something better than just “standard”. This show needs to carry on and, to do that, it’s going to need to build a winning streak to remind viewers why they loved this show as well as to show newer viewers that this show is as funny and legendary as everyone claimed it to be. “Avalanche” is a fun episode but could have been made better with sharper sketches and consistently funny riffing.