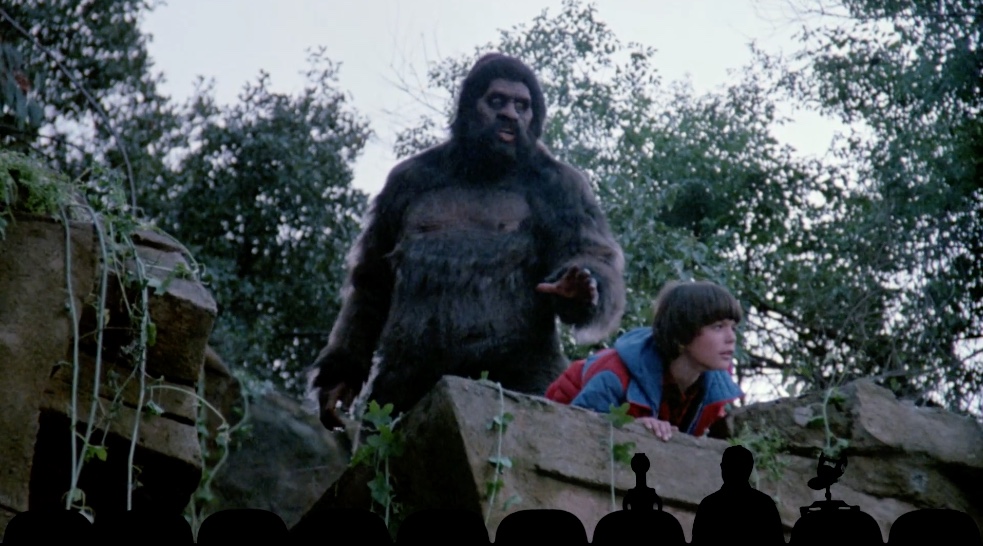 How terrible is “Cry Wilderness”, the second film featured in the new Mystery Science Theater 3000 series? Aside from not having much of a cinematic footprint (seriously, check out IMDB and Wikipedia; this sucker is bare bones), it’s like “Pod People”, “Boggy Creek II” and “The Final Sacrifice” all had a weird little baby and had it wander into Leonard Nimoy’s “In Search of Bigfoot” documentary. It has this cute little kid named “Paul” who, last year, befriended Bigfoot. THE Bigfoot. That’s why Paul’s going to some snooty academy where the boy’s quarters resemble the Edwardian Suite at the Plaza Hotel in New York. He’s got major issues. One, in particular, is having visions of Bigfoot, backlit like he’s Prince, yelling at him that his father’s in great danger. Yes, Bigfoot yells at Paul. At night. While he’s trying to sleep. Also, Bigfoot loves Coca-Cola. Forgot to throw that in there. So, of course, Paul’s dad gathers some hunter friends who have more guns than Texas during an NRA Convention to go hunt Bigfoot…you know, the same Bigfoot who was warning that his dad was in danger? Along the way, they fight with stock footage of every possible animal on the planet. 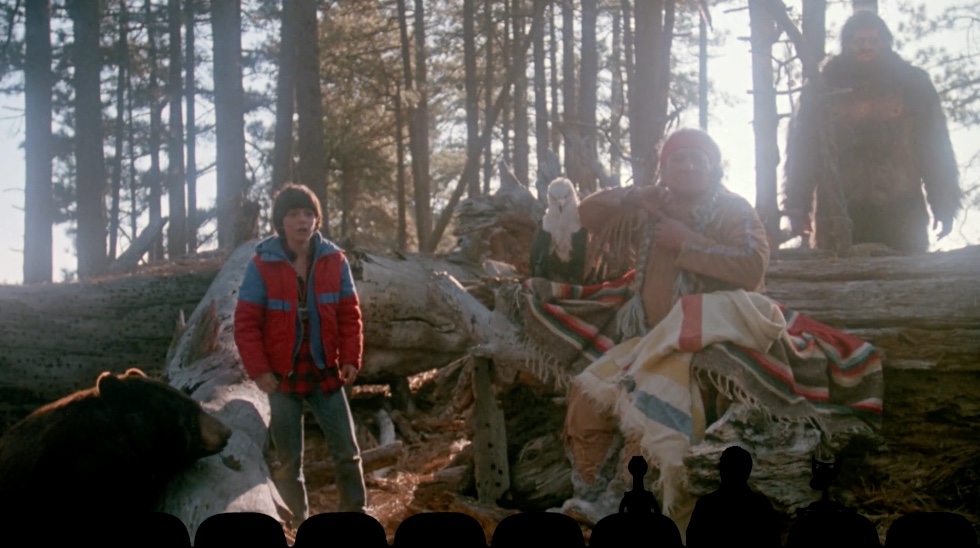 Yes, the movie is as ridiculous as it sounds…but it’s an anarchistic ridiculousness. If we’ve learned anything from the last ten seasons, it’s that the writers are masters with this type of material. Just like “Jack Frost”, “Puma Man”, “Pod People”, “Werewolf”, “Mitchell” and “Space Mutiny” before it, “Cry Wilderness” is a film that’s so WTF goofy, that Jonah and the Bots assume a free-wheeling riffing style, born of their respective characters’ frustration. That’s a HUGE treat for both them and us because their anger and pain just adds more humor to the proceedings and brings out the best in the trio, turning every single moment of the film into a comedic gem.

Some of the funnier ones (and this is scratching the surface) include: 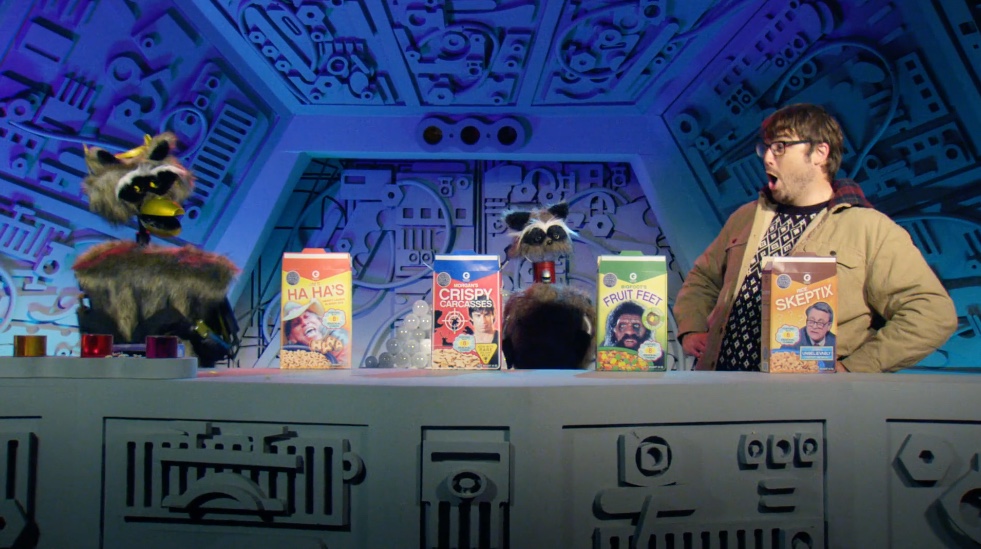 The host segments are nearly as funny as the theater segments. After a bit of a strange start (I’m really not thrilled Jonah has to “act out the intro sequence each time” or the idea of a cold open before that intro sequence), we get a great segment which recalls the “Trumpy, you can do magic things” bit from “Pod People”: Crow and Servo dress up like raccoons and start wrecking everything on the satellite while Jonah plays Paul’s dad who just sits there, laughing like a complete idiot and yelling for “Paul” and “Jim” to “get in here”. It grows even funnier when Crow starts taking a sledgehammer to a propane tank and Servo proceeds to whack a bee hive with a baseball bat which has Jonah in stitches. It’s hilariously simple. The only thing that could have made it better was if Kinga and Max got involved, belly laughing along with them, but this is still superb. The second sketch involves Jonah attempting to explain why things are the way they are in the film, prompting a frustrated Servo to ask, “So, why’d they make the Entourage movie?”, a great punchline for a sketch that probably needed one since plot analysis sketches on this show tend to drag a bit.

The final sketch deals with Pearl, Bobo and Brain Guy stopping by and docking with Moon 13. Let’s face it: it’s fan service. Additionally, the reunion runs in stark contrast to last season’s “Soultaker”. Whereas that episode featured Joel reuniting with the ‘Bots and meeting Mike on the SOL (and was matched down on the ground with TV’s Frank coming back to visit Pearl), we don’t get that kind of personal touch here. Brain Guy, Bobo and Pearl don’t leave their ship. Instead, they sit there and talk to Kinga and Max, which just makes the whole bit feel cold and stiff. The sketch is necessary because it serves to remind viewers that Kinga Forrester is related to Pearl who was the mother of Clayton, thus legitimizing Kinga as a villain which is sorely needed. Clayton was arrogant and goofy while Pearl was just plain mean and delightfully (and sharply) sarcastic. Both of them didn’t give a damn about Joel or Mike. They just did their jobs. Felicia Day, when she applies herself (condescending to Max is a nice touch), can be fun to watch but most of the time, she comes across as saccharin and I just don’t buy her as the “super-villain” type. And I think part of the problem is that we still really don’t have any motivation for her evil ways, so there’s been no way to “connect”. I totally understand that this was the result of scheduling and probably had to be filmed separately but if you’re trying to push Kinga as the top heavy, I think this sketch might have worked better had the trio been physically in Kinga and Max’s presence. That said, despite its flaws, the sketch does work and it left me laughing. Part of it is the addition of “Synthia” (Rebecca Hanson, who also voices “Gypsy”), a Pearl clone that Pearl has lovingly donated to Kinga. It’s the right amount of crazy to inject into the mix. 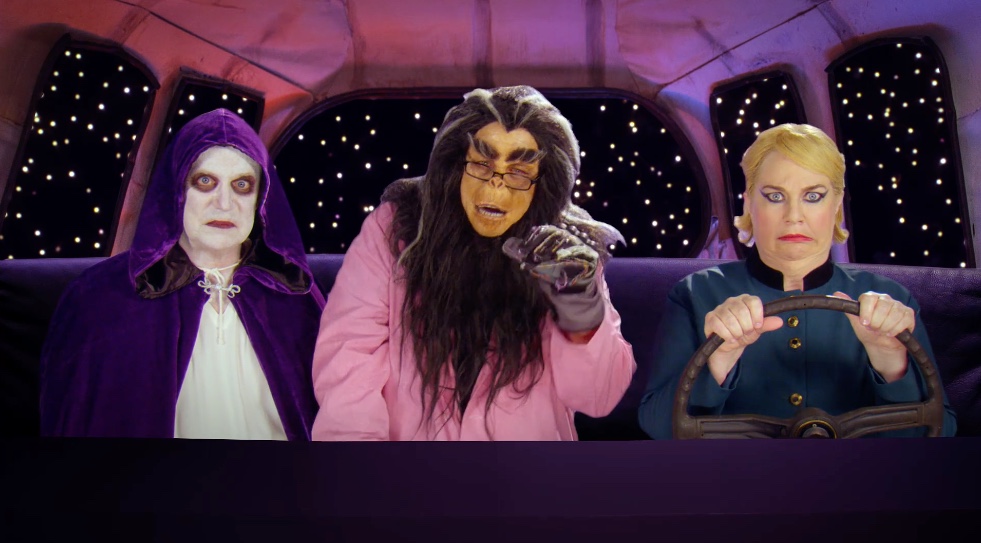 Overall, this episode is a riot. The riffing is near perfect, the sketches are the right tone and the episode cruises along smoothly. This is the stuff series renewals should be made of: quality, care and love for their target audience. “Cry Wilderness” not only stands as the best of the new MST3K series thus far (which is a VERY welcome sign), it’s also one of the best episodes in the entire show’s existence.