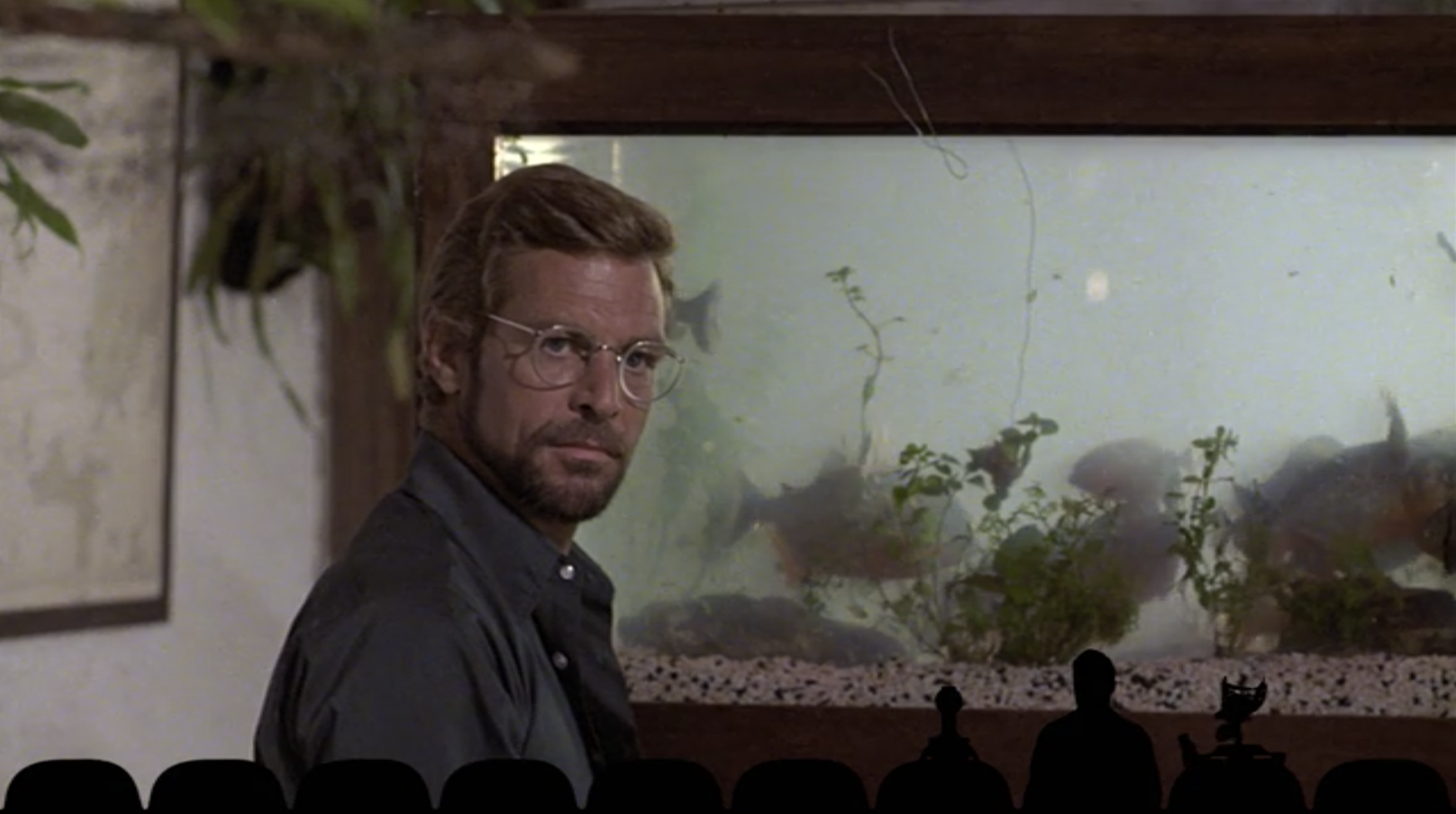 A bunch of thieves steal jewels and then dump the loot into a lake to collect 2 months later after the fuzz gives up their search. To make sure nobody within the crew double-crosses each other by diving down and grabbing the jewels early, Paul, the man financing the robbery, tosses a bunch of piranha into the water. Sounds badass, right? Yeah, it’s an awesome concept. Full of suspense and horror and intrigue. That would have been so cool to watch. Which is why it’s so puzzling that the filmmakers spent more than half of the film trying to avoid showing us that concept and, instead, gave us Lee Majors making dates at the resort swimming pool with a woman who is either older than he is or younger depending on whether or not the film’s hair and make-up artist decided to show up for work. In fact, all of these folks look less like thieves and more like participants at a swingers party. Also, there’s a lot of Roy Brocksmith playing a gay photographer. You’ll have so much fun watching him shoot Margaux Hemingway at every single possible square inch Brazil has to offer all while bopping your head to a soundtrack that can’t decide if it’s Disco or the theme to a 70’s local cable access talk show that aired just before your weekday cartoon shows. Aren’t you glad you tuned in to Killer Fish? 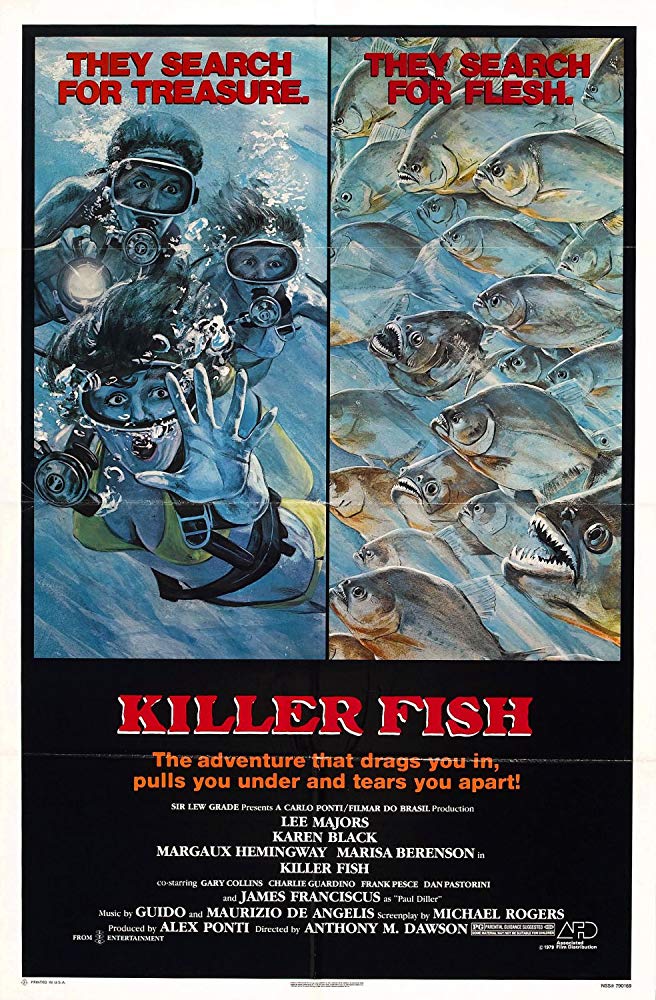 Killer Fish “is like watching the entire 1970’s go on the world’s worst vacation”, according to Kinga Forrester. And it is. And the frustrating thing about the episode is that the execution of the film makes everything uneven. One moment, you’re dealing with Lee Majors in a shower. The next, you’re witnessing a photoshoot. The next, you’re seeing piranha eat somebody while James Franciscus somehow channels Guy Pearce as he smugly stands in front of a piranha tank like a James Bond villain. The film is, at the very least, watchable. Of the six films presented thus far, it’s quality. The riffing, however, comes in fits. When it slows down, it really slows down. When the riffing takes off and the cast starts hitting jokes like the Steph Curry rains three-pointers, it’s hliarious. The best shots come near the end, when our group of heroes is attempting to survive being stranded on a boat in the middle of the piranha-infested lake. The belly-laughs are few and far between, however, as most of consistent riffs only induce mild chuckling, at best. The problem is that there’s always some sort of un-riffable sequence that murders any momentum Jonah and the Bots create. Case-in-point: the inclusion of Growler, Gypsy and M. Waverly during the bit where Karen is attacked in the reservoir by the piranha. Suddenly, Growler comes into the theater with, along with M. Waverly and a piano. Gypsy hangs from the ceiling and a full-on song breaks out. The entire cast appears to be having fun…but it just isn’t funny. It’s silly. Might it have worked better as a sketch? Yes! Considering just how weak the sketches are in this episode, the song would have gone a long way in improving things on that front. The beauty of MST3K is the simplicity. Every single character has a place in the show. We’ve done different characters in the theater. It’s an experiment that hasn’t worked. Furthermore, Growler makes about a half dozen more appearances in the theater throughout the film and, aside from his first bit (the Kool-Aid bit listed below), his quips are really off-putting. This sort of thing worked for Joel in Cinematic Titanic…but this isn’t Cinematic Titanic.

In my review of Mac and Me, I noted that the sketches have improved since the quantity of sketches was cut to two. It’s true that the jokes have more time to breathe…but not everything presented lands. The first sketch is Jonah and the Bots guessing what kind of killer animals are in the water. It’s a cute idea…but it’s simply a glorified costume contest and nothing more. The second sketch is wince-inducing as Jonah and the Bots dress like NASA errand boys a’la Apollo 13. The sketch is already self-aware when Servo points out that Apollo 13 is over 20 years old and that this joke has sailed. Whether the writers were attempting to be self-deprecating or meta or something, I’ll never know, but the remark already starts everything off on a bad foot. It ends with Jonah inventing a “raft” made out of all the characters of the film. Ho-ho. Even the re-introduction of “Idiot Control Now” falls flat at the end and really doesn’t make much sense. The only real laughs come from the Invention Exchange where Kinga and Max invent a “Time Travel Oven” so that your food a) will be cooked in seconds and b) never burn. If it does burn, you can just go back in time to when the food was “younger”. When Max overcooks turkey and goes back in time to the point where the turkey is struggling and still alive, attempting to escape the oven and Max is trying hard to push him back in to cook, I was gone. It’s really too bad nothing else hit that mark in this episode. 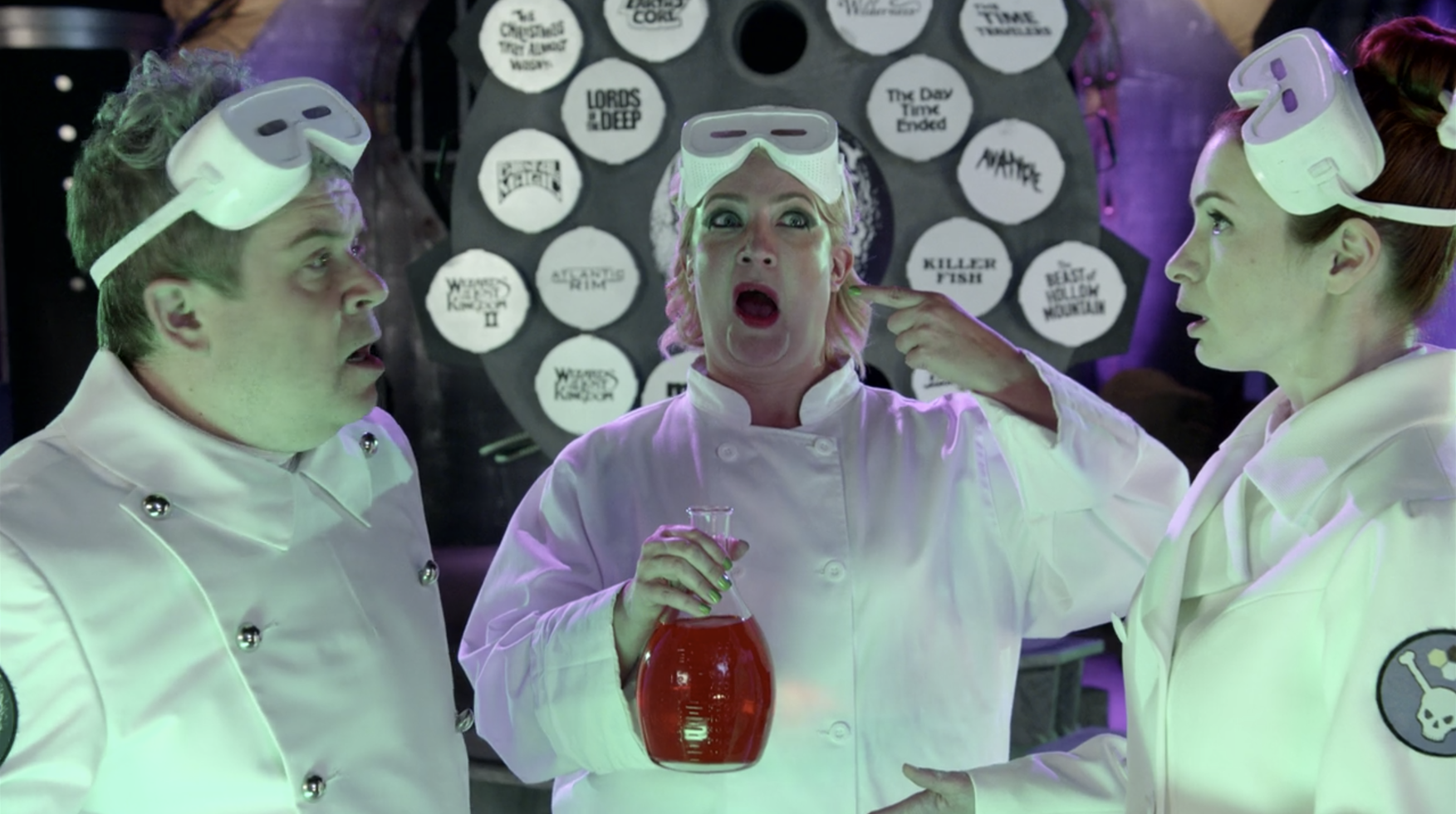 We’re five films into The Gauntlet and while the riffing saves this from being a total loss, it’s too sparse. Combine that with weak sketch work and Killer Fish is the weakest offering of the 12th season.

(The thieves approach one of the large locker doors, open it up and walk through it.)
CROW: Ok, guys, listen: one hour in Narnia, MAX, then it’s back to the heist, right?

(The title of the film shows.)
CROW: Yeah, this is just a placeholder. We’re obviously NOT gonna call it “Killer Fish”. I mean, that’s a trite name for a movie of this magnitude…

(A prop plane takes off, flying over water.)
CROW: Good move! The director is high-tailin’ it out of here!

(Car leaves off-camera. Lee Majors cocks his head to the side.)
SERVO: Ok, Lee, just move your head like the car is driving away. That way, we can do re-takes, which we’ll need…

(KAREN turns toward the camera, looking haggard and unflattering.)
SERVO: She looks like every Barbie in a Goodwill toy bundle…

(KAREN knocks on Bob’s hotel door incessantly — then just comes in.)
JONAH: Jeez, does she have a master key to this hotel or what?!

(KATE and PAUL walk through a jungle in pouring rain.)
SERVO: If it’s really raining, like really hard, can the piranhas just move through the air? Should we be worried?

(A passenger on the Guarini goes overboard and piranhas begin to feed on him. KAREN starts screaming for help.)
CROW (as KAREN): If we keep losing passengers like this, we won’t qualify for the Groupon rate!

(KAREN tends to a hurt boat passenger and tells him to lie still. PAUL looks up at BOB, but says nothing.)
SERVO (as PAUL): We’re gonna have to make a deal with the piranha…leave this to me…they OWE me…

(BOB sets up a raft and kneels on it.)
SERVO: Just enough room for me and Wilson…

(Blood permeates the water around the boat.)
GROWLER: Who wants Kool-Aid??? (Pause.) You guys do that one already?
JONAH: Yeah, we did…
GROWLER: All right…I’ll just be over here…

(PAUL is in the escape raft, betraying KATE. KATE has turned her back on him in anger.)
PAUL: Good-bye, Kate…
SERVO (as PAUL): I’m off to stock Hawaii with wolverines.

(BOB opens up the vanity case housing the jewels.)
(CROW sings the “Chest Open/Discovery” song from “The Legend of Zelda: Ocarina of Time”.)