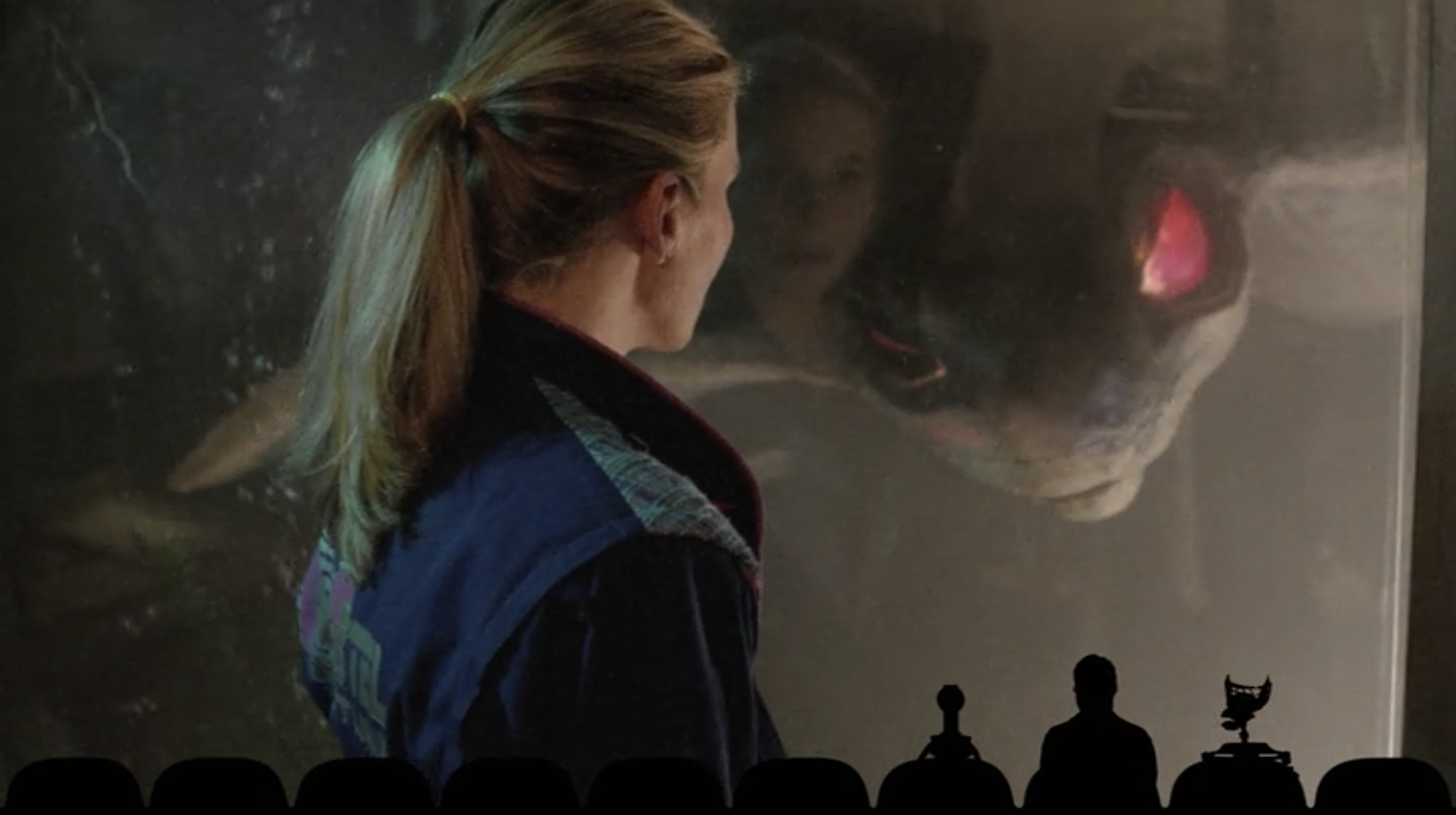 Lords of the Deep was one of about a half dozen “underwater adventure” movies that came out at virtually the same time. The series of films saw  either saw human beings plagued by sea beasts, both of this Earth and otherwise (Deep Star Six, The Evil Below), hideous aliens (Leviathan), victimized aliens (The Rift) and benevolent aliens (The Abyss). Lords of the Deep saw all these, then said, “Hold my beer, my dude,” and gave us a movie about demonic manta rays who just want you to get high and trip balls so that you could ultimately accept the horrible murders of your crew mates, travel through a Mario Kart rocket tunnel and end up inside The Carin Room at the Madonna Inn for the purpose of reuniting with deceased loved ones. For as much credit as James Cameron deserves, even though he shouldn’t be blamed nor hated without probable cause, you may thank him for inadvertently bestowing this mess upon us. I’d say he opened up Pandora’s Box…but it would be more fitting to say he…”opened the flood gates” instead. Aren’t you glad you subscribed to my blog so you could read jokes like that? I thought so. 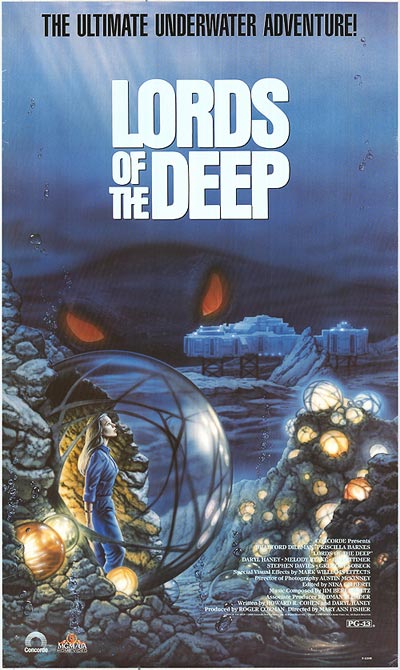 Before there was The Asylum…there was Roger Corman. Corman, bless his heart, is still alive, 92 years young. He built his entire career on films like this. More than a few of them have been featured on this show. As Max notes, Lords of the Deep is NOT, in fact, an Abyss rip-off. Deep Star Six and Leviathan ripped off The Abyss — and Lords of the Deep ripped off those films. So, everything’s all right, guys! What’s more, Corman shamelessly rips off 2001 while he’s at it with the Malevolent AI Computer trope. All while giving us so…many…shots of the high-tech underwater base. MST3K was made for this kind of sci-fi cheese. The riffing on this movie does take some time to get going and really takes off once Claire and O’Neill are established as lovers. The two have absolutely zero chemistry being that Claire is driven and O’Neill is such a beta. That doesn’t stop Jonah and the Bots from unloading on poor O’Neill’s naivete when it comes to their sex lives. The endless and, at times, oddly-placed establishing shots of the underwater base (it’s even on the goddamn POSTER for crying outloud, so the thing is as immortal as The Vampire Lestat) is met in clever fashion: constant references to sitcoms where establishing shots are the norm during transitions.

The sketches vary, however. The 1st skit involves Jonah dipping his hand into the same lab sample that Claire does in the film, causing Jonah to reveal some INCREDIBLY intimate and possibly scarring childhood memories. It’s the right amount of comedy delivered in the right amount of time. The 2nd skit, however, is weak: the Bots try to settle an argument like the men in the film (using childhood rhyming and hand signals) and this is interrupted by Max and Kinga starting some sort of “morning” show which serves no other purpose except to set up the more humorous ending sketch where the creature from the film goes apeshit and bites the doctor in charge of wrangling it, causing chaos on Moon 13 and sending Max and Kinga into the same hallucinations of colorful tunnels you saw in the film. It’s just too bad that all of that couldn’t have been executed in the 2nd sketch. Another thing: there’s been hints at a running plot down on Moon 13. Something about Jonah and the Bots having some sort of plan to sabotage the works so they can get back home and something having to do with a mysterious ship blowing up part of Kinga’s fortress. I’m not quite sure. Hopefully this pays off. It should be mentioned that the Kinga/Jonah wedding angle was never resolved. Not that it was ever meant to. The gag behind that was that the wedding was done “for ratings”. But seeing as though there hasn’t really been any sign that Kinga and Max run any sort of “TV network” (even the cool little “commercial break/rejoins” featuring the Boneheads band playing music are gone), I’m not really sure this will lead anywhere, either. 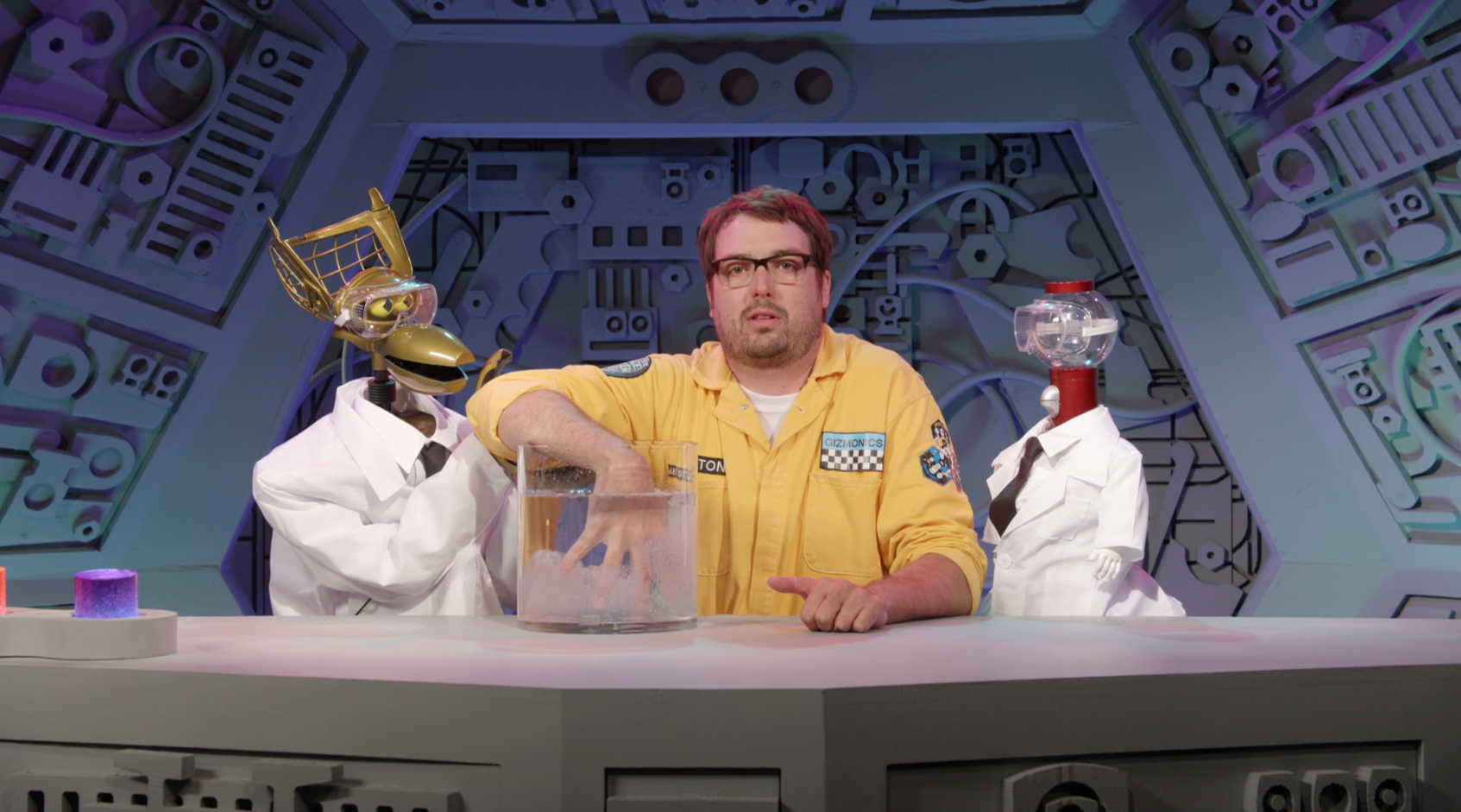 Overall, Lords of the Deep is another solid outing for MST3K and it feels like the best is still yet to come with Ator, the Fighting Eagle.

(CLAIRE looks into a microscope, then pulls back, cringing)
CROW (as CLAIRE): Dah! I think I just blinded myself with science!

(A monitor snaps on, showing a man sitting in a chair.)
JONAH: MCFLY!!!
MAN ON SCREEN: Stuart…any word on the replacement crew?
DOBLER: Uh, no, sir…and, frankly, I’m getting a little impatient. I think I’m starting to develop gills…
JONAH: HA!!!
MAN: We may have to strip you of your rank and start using you for experiments!
SERVO (as Dobler): Yummy!
MAN: What about the others? Are they anxious to return to the surface?
JONAH (as Dobler): No! They’ve grown GILLS! (The bots chuckle)

(CLAIRE watches as her lab sample melts in a glittery mound on the floor.)
SERVO: Well…looks like Pamela Anderson’s been here…

(CLAIRE and O’NEILL speak in their bedroom of the danger of their recent discovery.)
O’NEILL: I’d like to believe you…
SERVO (as Pee-Wee Herman): “LIKE”, Dotty!
CLAIRE: Well…(she tosses a pillow aside, revealing a shirt on, falling off one shoulder, with nothing on underneath) I could convince you…
CROW: She’s like if God didn’t quite finish making Michelle Pfeiffer.

(CLAIRE and O’NEILL get comfortable. CLAIRE lays on top of O’NEILL’S chest and the two attempt to sleep.)
JONAH: You know, in the Kama Sutra, this position goes by a number of names: “The Sleepy Arm”…
CROW: The “No, This Is Fine”…
SERVO: The “What Happened To Us?”…
JONAH: The “Excuse Me While I Get My Phone And Go Into The Bathroom For, Like, Ten Minutes”…

(Yet ANOTHER establishing shot of the crew’s underwater station, the third in about the last minute.)
CROW: I’m glad they keep showing us this or we might forget where we were.

(Everyone stares at the weird fish thing in the tank.)
(ANOTHER establishing shot of the station.)
(While we get the establishing shot, JONAH performs the Seinfeld Transition Music.)
(Everyone is sitting at the table talking about the next fish.)

(ANOTHER FREAKIN’ ESTABLISHING SHOT OF THE UNDERWATER BASE.)
JONAH: “Lords of the Deep” is filmed before a live studio audience!

(CLAIRE takes a submarine and docks with some sort of pink, underground alien cave. She climbs out.)
CROW: The Lion, The Witch and the Dryer Cycle!

(CLAIRE continues to explore the pink cave.)
SERVO: Finally, a Sarlacc Pit that’s strong enough for a man but pH-balanced for a woman…

(DOBLER gets into a fist-fight with O’NEILL and incapacitates him. He gets back to his station and puts on a headset.)
CROW: Sorry! I had to step away…would you like to Super-Size that?

(THE 75TH ESTABLISHING SHOT OF THE UNDERWATER BASE.)
CROW: We now return to “Lords of the Deep”, already in progress!