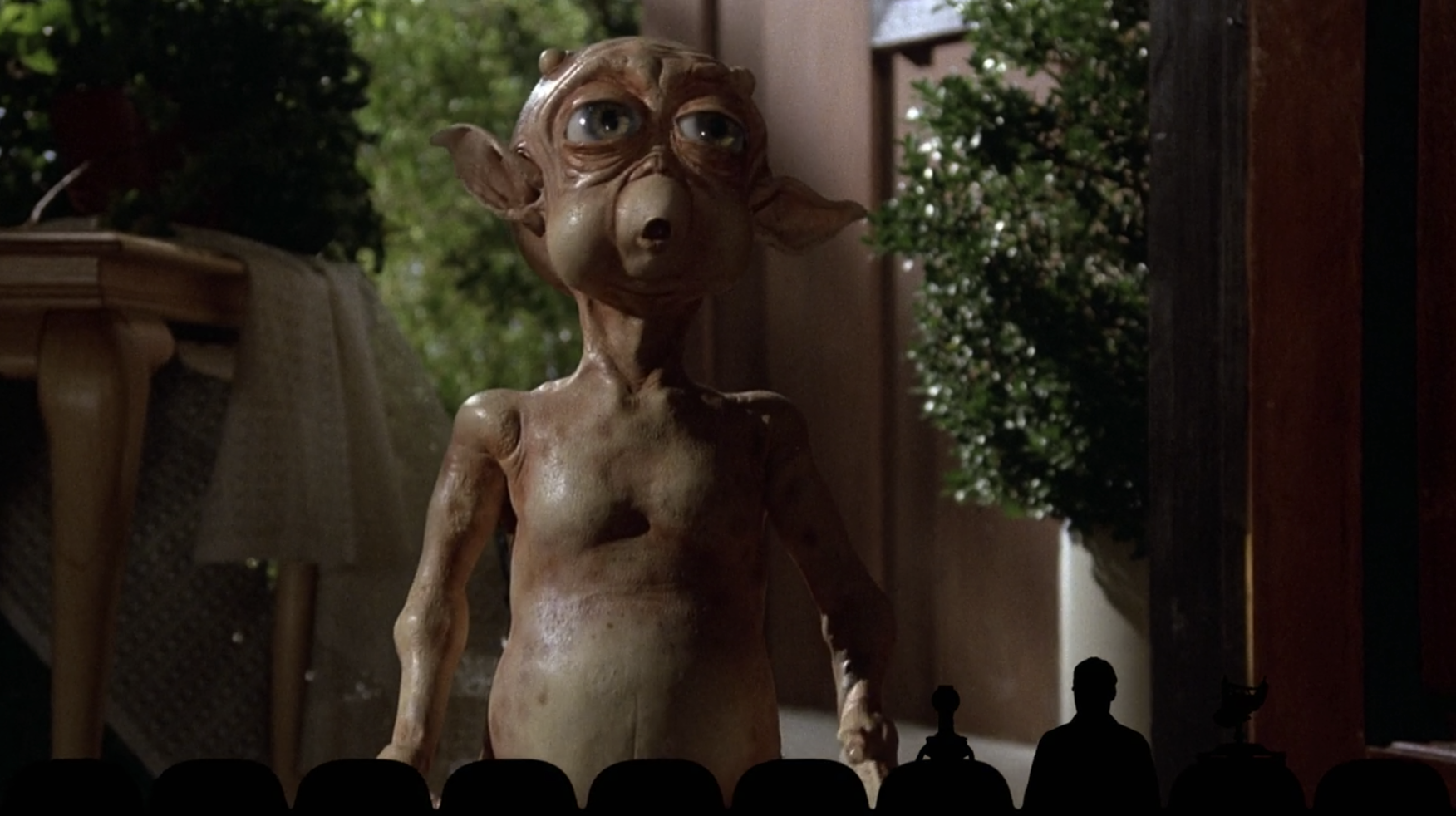 MYSTERY SCIENCE THEATER 3000
Season 12, Episode 1
“Mac and Me”
Available on Netflix
GRADE: A

When Mystery Science Theater 3000 returned with 14 new episodes in 2017, fans were overjoyed but cautious. Even with the words, “THE RETURN” tacked on to the title of the show, was it truly a return or was it one final attempt at cultural relevance?

Luckily, following Turkey Day 2017, show creator Joel Hodgson gave us just one more thing to be thankful for: the announcement of the 12th season of MST3K, music to the ears of fans, old and new.

Of course, there are some changes to be had.

First and foremost, the new season is the shortest since the 7th and final Comedy Central season, giving us just six episodes, down from 14 from last year. Each episode’s length has also been shaved by 10 minutes which means we’re losing a sketch per show. Also, the riffing style changes from time to time, involving more props and robots…but, then, I’m getting far ahead of myself. We’ll go over these things as we go along.

The idea behind this season is that the show takes place in the span of eight hours, give or take a few minutes. Kinga Forrester (Felicia Day) and Max (Patton Oswalt) have had enough screwing around with their old TV technology and they’ve decided to go medieval on Jonah (Jonah Ray), feeding him and the ‘Bots all six of this season’s films consecutively. They’re bad, too. Real bad: the E.T. rip-off Mac & Me; The Asylum (the studio behind Sharknado) contribution/Pacific Rim rip-off, Atlantic Rim; Lords of the Deep, an Abyss knock-off; The Day Time Ended, a goofy Spielbergian alien mess; Killer Fish, a film about jewel thieves who are hounded by piranha after their boat is stranded in a major storm and Ator, the Fighting Eagle, a film whose protagonist should sound familiar, given that we saw the film’s sequel (titled “Cave Dwellers”) way back in Season 3. The effort has been dubbed “The Gauntlet” by Forrester.

And, like Jonah and the Bots, we’re gonna take this one film at a time.

And, good LORD, does this series start off hot and heavy with Mac and Me…if you don’t remember this movie, CLOSE THIS BROWSER NOW, FORGET THE TITLE OF THE FILM AND GO LOOK AT PORN. Um…did I say “porn”…? I meant…the website for the new Lion King re-do…yeah. Are you still here? Christ, I’m sorry. Mac and Me was supposed to be the next big thing following the success of 1982’s E.T., the Extra-Terrestrial. It’s basically what would happen if the people who made Cry Wilderness tried harder and had the means to do so. And still failed. It’s the story of little Eric Cruise and his family of Cruises who move to California from Illinois because, back then, the air in California was breathable and wasn’t toxic with the smoke of five forest fires. The Cruise family soon finds that their home has an extra resident in “MAC”, which stands for “Mysterious Alien Creature” and doesn’t have ANYTHING to do with McDonald’s, which, along with Coca-Cola (the fluid the aliens cannot live without for some reason) and the Chicago Cubs/Bears (In case you didn’t know the characters are FROM CHICAGO) has prominent placement in this film. From there, it’s a dangerous cat-and-mouse game between the Tom Cruise family (come on…it was 1988 and Cruise was the man) and the evil NASA. I knew there was a reason I hate those guys. 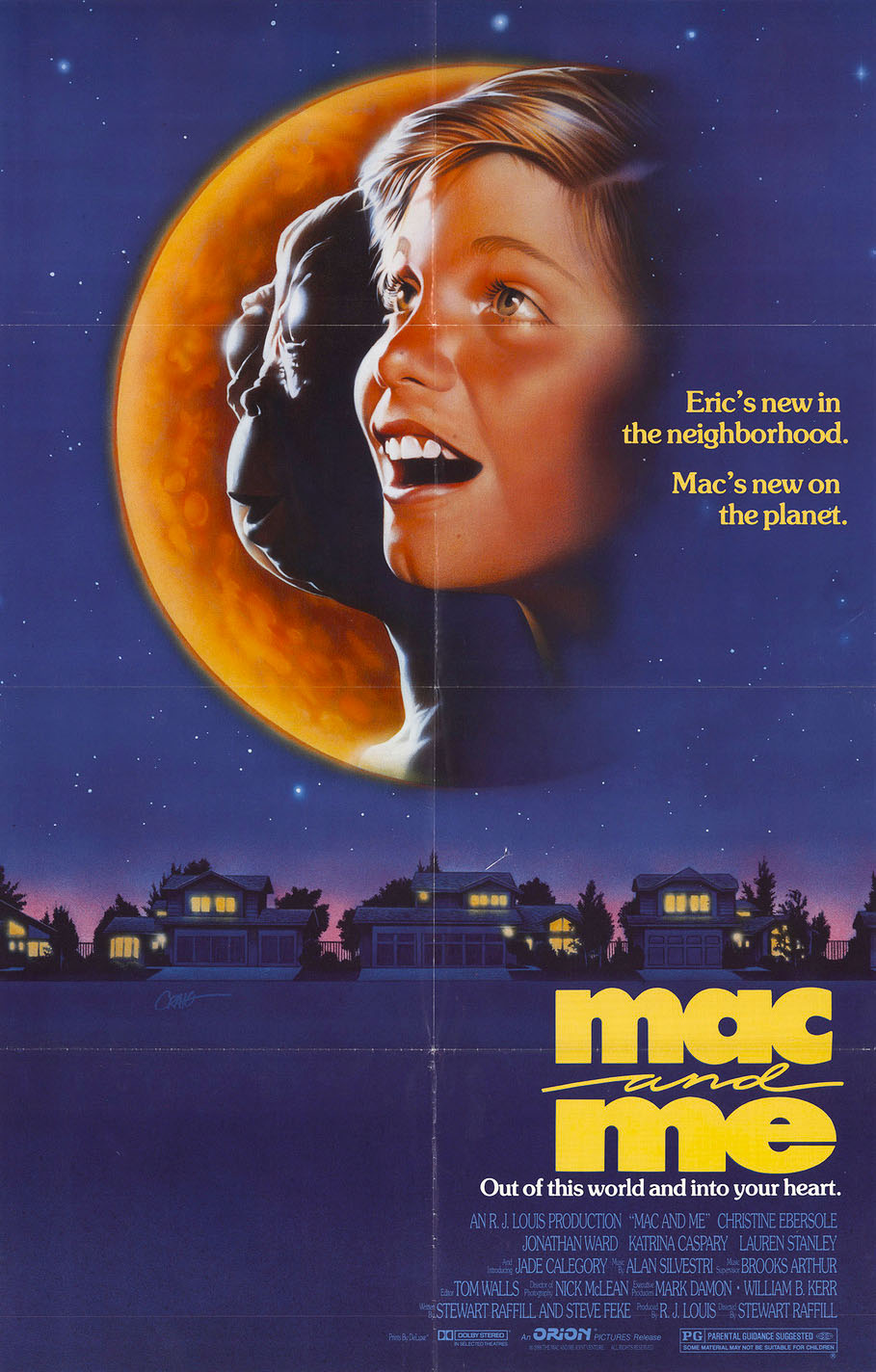 This movie “turns E.T. to B.S.” exclaims Kinga. And, ho boy, she’s right. When I was a kid, this movie LOOKED good…but, dammit, if my friends and I weren’t already wise to McDonalds’ latest kiddie scheme. Imagine the shock on my Mom’s face when she asked if I wanted to see and I told her “It looks like an E.T. rip-off.” She couldn’t have been THAT broken up over my newfound cynicism. I’m pretty sure I saved her a $100 dollars in admission, popcorn, candy and soda. Mac and Me is widely considered to be one of the worst movies ever constructed. The first time I saw this movie…was just a few minutes ago, when I sat down to write this. The only bit of the movie I ever saw was the bit made famous by Paul Rudd’s running joke on Conan when he’d “show a clip of his new movie” — only to roll the part of Mac and Me where Eric loses control of his wheelchair and flies off the cliff to a certain death. Sadly, that’s not even the worst part of this film. In fact, I can’t decide whether the worst part is the surreal dance number inside of McDonald’s or the horrifying, climatic scene where the authorities blow a local supermarket to kingdom come, straight up murdering Eric in cold blood. And if you’re saying, “This doesn’t sound at all like a movie for children”, the original ending was worse. A LOT worse. While the film is all kinds of awful, the episode itself is brilliant and easily one of the best of the entire show. Nearly every single riff is an absolute hit (see below for some of the best, as usual) because it’s the perfect storm of bizarre, goofy fodder from a bygone era that only The Asylum seems to have clung to. It also helps that the riffing quantity has been scaled back to pre-Netflix levels, giving more time for the jokes to land and that’s MOST welcome.

The reduction in sketches also pays off in spades, giving us two of the funniest sketches of the Netflix era: Jonah using the MAC Alien Whistle to communicate with Max down on Moon 13 is hilarious and involves the entire cast who play it up with straight faces — and that’s topped by the second sketch involving Servo’s “birthday party at McDonald’s” where Jonah and the Bots seem to be under the influence of “The Grimace” played by Gypsy (Rebecca Hanson) who doesn’t like it when kids don’t have fun, lest they be “sent to the ball pit”.

This is MST3K at the top of its game and if Mac and Me is any indication, Season 12 looks to be one of the greatest seasons of all-time. 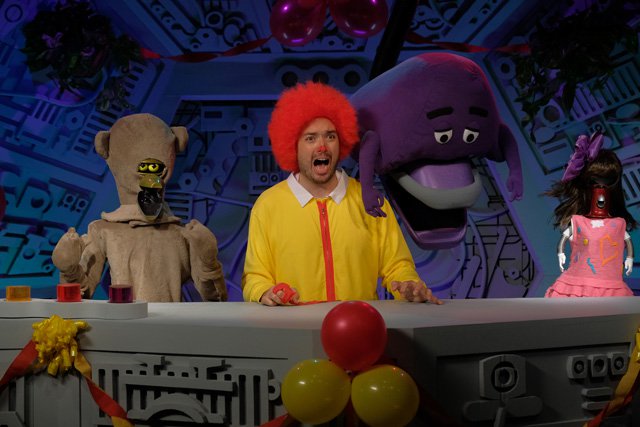 (We see a desolate planet with big rocks that resemble rubble)
JONAH: Ah! Epcot’s “Post-Apocalyptic Pavilion” is really coming along!

(A MAC taps the rocky surface for liquid to drink and the liquid squirts out.)
JONAH: So THAT’S where La Croix comes from…

(A United States NASA space probe lands on the surface. The aliens stare at it, unsure.)
JONAH (in robotic probe voice): “Somebody order an Uber?”

(MAC escapes the base and gets shocked on an electric fence. His body stretches out in an inhuman manner as he fries, nearly to death.)
SERVO: So, kids LOVE this, right? This is “cute” to a human child?
JONAH: Oh, totally! The fact that he’s been in agony since we’ve met him makes him even more relatable.
CROW: Oh, yeah…
(MAC lets go of the fence and tumbles into the road and immediately gets hit by a car.)
CROW: So, now, our lovable hero is getting hit by a CAR…gotcha.
(MAC is literally plastered, flat, against the windshield of the car while a child and his father scream in pure horror. Meanwhile, the musical score is somehow still goofy and whimsical.)
CROW: I wanna see the movie the composer THOUGHT he was scoring…
(JONAH and SERVO laugh.)

(A frightened Eric is in bed. His Mom is tucking him in. She takes a baseball bat from him and puts it aside.)
JONAH (as MOM): Eric, put this away! I told you: the tooth fairy is NOT real…
MOM: Now, come on. I want you to stop worrying about this…
ERIC: Did you lock all the windows?
MOM: Yes…
SERVO (as MOM): You can’t escape…
ERIC: Good…I was thinking maybe it wasn’t such a bad thing anyway. All it did was take a shower and drink a soda…
CROW (as MOM): AT THE SAME TIME?!
MOM: Well, maybe it was one of the neighborhood kids or something. I mean, I’m sure there’s a rational explanation.
JONAH (as MOM): …but probably a TERRIFYING one…

(Eric flies off a cliff in his wheelchair.)
JONAH: You know, they went through THREE Erics making this.

(We get an establishing shot of a dry desert area.)
CROW (as a narrator): When visiting Bakersfield, California…RECONSIDER!