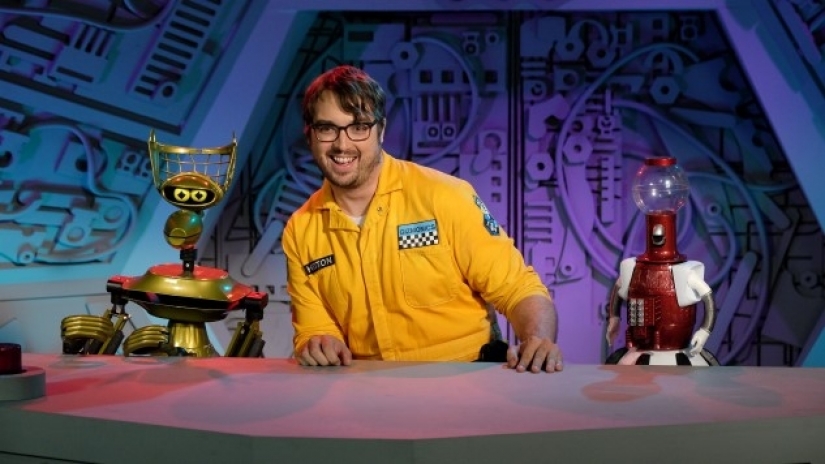 I’ll just get it out of the way now so you know where I stand: For 11 years, three networks, two different hosts, four different robots, one “magic voice”, six different villains, 197 episodes and one feature film showcasing some of the worst movies ever committed to celluloid, Mystery Science Theater 3000 was one of the greatest television show of all-time. Featuring a clever premise (a lowly janitor is shot into space by mad scientists and forced to watch awful movies) invented by show creator and host Joel Hodgson, the show hit on every aspect of pop culture thanks to Hodgson’s decades-worth of unique knowledge of entertainment’s past. For a decade, the show entertained viewers using references and in-jokes from the world film, music, television and toys, just to name a few, creating one of the most dedicated, delightfully geeky fan bases since Trekkies were a thing. Even when voices, hosts and villains shifted around or changed, the show remained at the top of its game until it finally said goodbye to fans in 1999. But even after its departure from television, fans kept the show alive via the tape-trading market and word of mouth which lead to some of the former alumni of the show to create offshoots of the series.

Joel Hodgson went on to create Cinematic Titanic, a slightly different version of MST3K starring former cast and crew members Trace Beaulieu, Frank Conniff, Mary Jo Pehl and Josh Weinstein. Show producer Jim Mallon pushed an animated cartoon on his personal MST3K website and the most recent riffers Mike Nelson, Kevin Murphy and Bill Corbett currently make comedic running commentary tracks for recent movies (good and bad) called “RiffTrax”. Of the three projects, the latter still exists but they were all fueled by one thing: the love of Mystery Science Theater 3000. Hodgson sensed this and began reacquiring the rights to the films used in many of the episodes, an unfortunate downside to being “unique”: when you riff on somebody else’s movie, you have to get the rights to show it. This is the main reason “collections” are released to home video instead of full seasons. To this day, owners and distributors of some of these films don’t want them showcased in such a manner. “Complete” collections only exist, in fact, due to digital archivists whose hard work gets put up on torrent sites for all to download. Since I didn’t want to wait the requisite 24 days it takes to download 100 GB and drive my bandwith bill up into the millions (I fucking hate Comcast), I chose to get my collection from a friend of mine. Because of him, I was able to relive my teenage years by watching the show whenever I wanted. It still never fails to make me laugh. 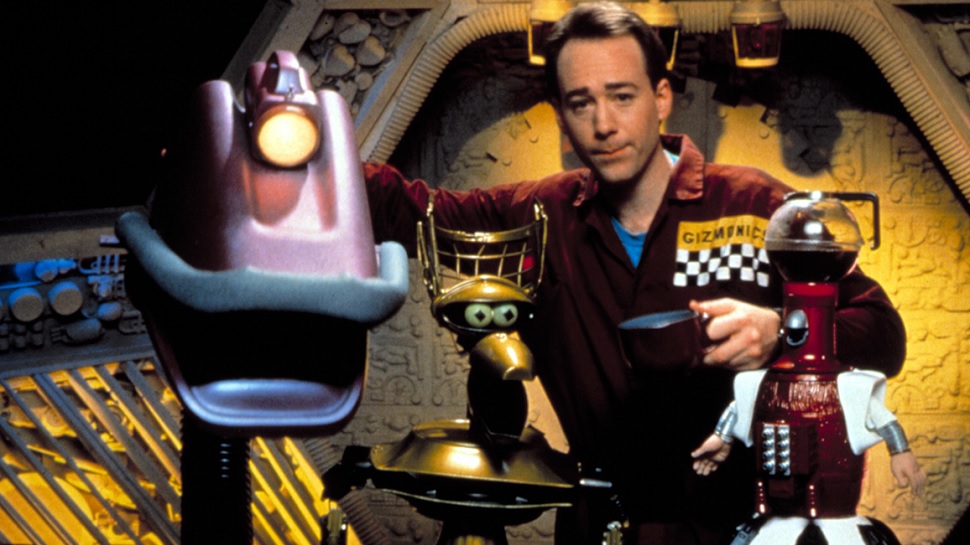 Imagine the glee heard from every MSTie on the planet when Joel Hodgson announced that a new version of MST3K would be in the works — provided his Kickstarter campaign received enough funding. Two months later, Hodgson had nearly $6 million dollars and the fans got a new season. From that moment on, it felt like forever. It only started to become real during Turkey Day 2016 when it was announced that Patton Oswalt would be cast as “TV’s Son of TV’s Frank” and we got to meet the remainder of the cast. Then the release date was announced…then the teaser trailer. It was all coming together.

And here we are now…

It’s 2017. We’ve seen our fair share of reboots, sequels, “re-imaginings” and revivals. You might imagine that it’s very easy to be cynical. Not much evidence is required to subscribe to this line of thinking: The X-Files was a fantastic example of what not to do when re-launching a series. Power Rangers was a mess. Warner Brother’s DC Comics film franchise reboot following the Dark Knight films is a hot pile of steaming garbage. I’d mention CHiPs here but that’s not just stating the obvious, it’s almost unfair to a point. Would Mystery Science Theater 3000 succumb to the fate of those that dared choose resurrection instead of retirement?

Having waited for YEARS for this moment, having had repeated self-programmed marathons born of my own collection, having done the same with RiffTrax’s “Twilight” collection…having agonized with my fellow MSTies…I am very happy to report that Mystery Science Theater 3000 has finally, truly returned.

Was there any doubt?

Yeah, the show’s first episode isn’t without its flaws. Yes, it’s different. You’re a seasoned MSTie! Does any of that actually worry you? Are you sitting there nitpicking when you should be relaxing and just living in the moment and enjoying the jokes? Do I have to remind you that KTMA’s episodes weren’t this crew’s best work? That the early episodes at Comedy Central were stiff and that it took the writers time to find their legs? Do I need to recall the time Joel quit and Mike was introduced — but the biting humor was retained? How about when the show moved from Comedy Central to SyFy? STILL FUNNY. What, you thought the show wouldn’t be able to survive the Internet/Social Media era where it could be endlessly scrutinized, judged and dismissed?

Mystery Science Theater 3000 INVENTED modern “snark”, junior. All those Internet trolls you’ve fought, all those fights you’ve lost, all those memes? You can thank this show.

It’s on Netflix now. We’ve got Jonah Ray playing “Jonah Heston” (an obvious nod to Charlton Heston who the cast has referenced more than once with regard to his part in “Planet of the Apes”), a brilliant “Gizmocrat” who has brought home a huge mining payload that should make him rich — if it weren’t for a mysterious woman and her crew aboard “Moon 13” who hijack Jonah’s ship and force him to land. It’s here where the show exhibits its first flaw: attempting to give us an origin story while force-feeding us the new theme song. Having the song stop and start as it does really throws off the comedic timing and makes things feel a bit klunky. Even still. you can’t help but smile when hear the recognizable lyrics, “I’ll send him cheesy movies/the worst we can find — la, la, la” which goes into a new Robot Roll Call and crescendos, of course, with the title of the show.

But, hell, they had me at “TURN DOWN YOUR LIGHTS (WHERE APPLICABLE)”. 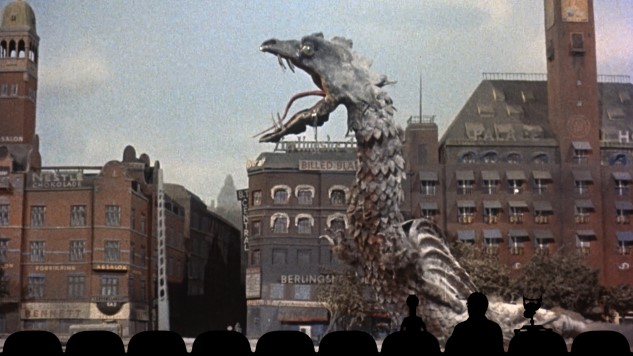 The movie they riff on is a nice, stinky slice of monster cheese called “Reptilicus”, a Danish attempt at a Godzilla movie which is very much like Season 10’s “Gorgo”, only with a smaller budget. The riffs come hard and fast (something that’s remedied upon second viewing) and has quite a few gems:

Jonah and his crew even toss in a few old references:

The good news is that the new riffs outweigh the old callback material which is only there to glad-handle the series VIP’s. The bad news? Not to be a downer, but Kinga Forrester and “TV’s Son of TV’s Frank” (AKA “Max”) are weak and have very little screen time. There’s also no explanation for why they grabbed Jonah and forced him to watch movies except for the incredibly vague notion that Kinga’s running some sort of network conglomerate and is using Jonah and the Bots to drive ratings through the roof. I suspect that the show will develop the characters over time and we’ll see a little bit more chemistry but it ends up being one of the least memorable things about the episode. What can you say when Kinga and Max won’t even participate in the Invention Exchange? I just can’t. 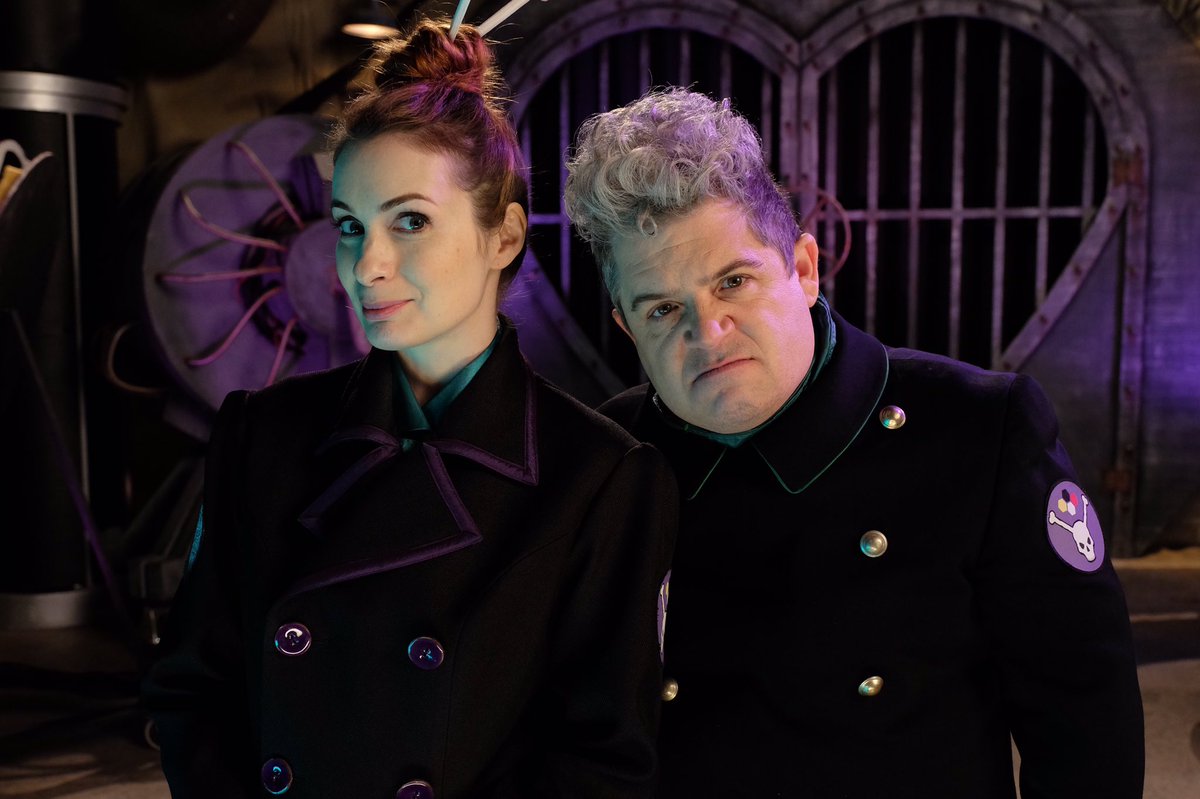 Also just a touch jarring, though not as detrimental, are the small changes: Gypsy’s voice (Rebecca Hanson) has been “reprogrammed” to sound like an actual woman. Part of Gypsy’s charm was that she always sounded like a guy imitating a girl — but you still believed and accepted her as a woman. The change seems altogether needless for a show that seems hellbent on tradition. Also, while I’m used to the new voices for Crow and Tom Servo (Hampton Yount and Baron Vaughn, respectively), it’s odd that a) you can’t tell which one of them is talking in the theater and b) slight changes have been made to their characters now that this MST3K has a bigger budget. For instance, Crow’s arms work. He can clap, he can move them around. I’m not used to this. Servo’s arms still don’t work — but the dude can fly around now. In the theater, he assures us, but he can fly now. I don’t so much mind Crow’s change as I do Servo’s. This is a gimmick that’s used far too often during a movie and, needless to say, it’s distracting and steals time away from the other riffers.

Other than that, the skits are strong for the most part. Even though Netflix doesn’t have “commercials”, we still get the classic “theater breaks” which, in turn, gives Jonah and the Bots three good chances to stretch and make us laugh. The strongest of the three immediately warms you up and makes you realize just why you loved MST3K so much: the Bots ask Jonah to explain, in song, the correlation between any given country and the monster that haunts them. Jonah puts his heart and soul into the number and the Bots sing along to “Every Country Has a Monster” which I’m just going to go out on a limb already and proclaim to be a classic MST3K number. The writing here is absolutely brilliant — especially the break after the “Chinese Chicken” bit which is lovingly adopted from “One Week” by The Barenaked Ladies and casually dropped right into this one. The other two skits are a toss-up. The middle sketch sees Crow using one of Servo’s limbs to clone him (something we did in the last episode if memory serves) and one where Jonah reads fan letters from very small children who are far too young to even know what MST3K is unless we’re supposed to assume they’re a product of fanboy parents. Regardless, the sketch is very cute.

2016 may have ended badly and 2017 may be a transition year but any year that sees a new batch of MST3K episodes is a good year.

I look forward to binging on this show for the next month.