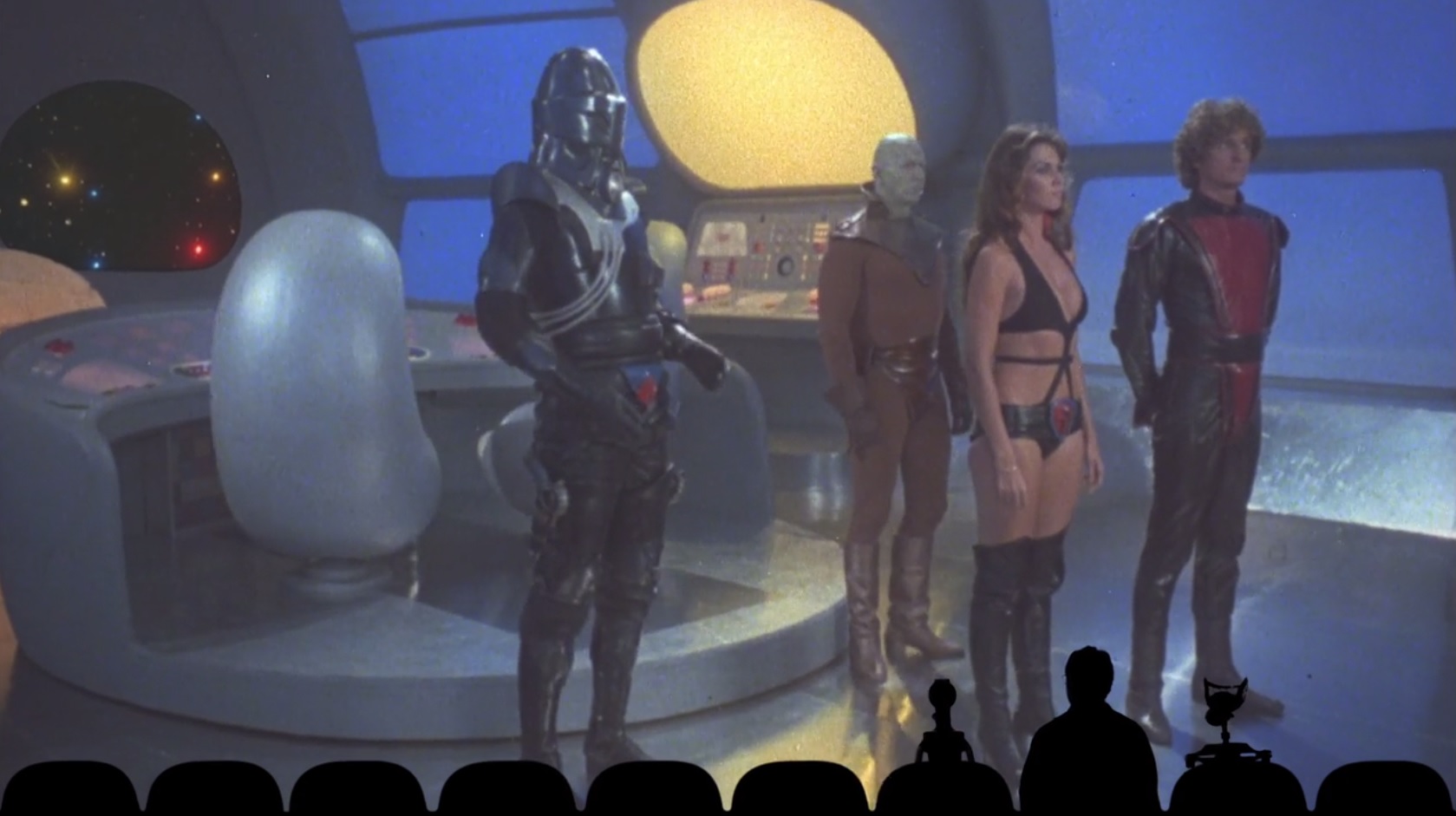 “Starcrash” is the only film I’ve seen which has David Hasselhoff and Christopher Plummer in its cast and doesn’t involve natural disasters while Hasselhoff runs through a burning building in bell bottoms while attempting to rescue his boss (presumably played by Plummer) and his estranged wife whom he gets to paw (acceptable 70’s pawing when it was practically the law…presumably played by Mackenzie Phillips) after some heavy disco dancing and implied (ok, PROBABLE) 70’s swinging. Also, this is supposed to be a Star Wars copy. Really. It even has lightsabers and a guy named “Zarth”. All we’re missing is an epilogue explaining the results of the lawsuit involving intellectual property theft. 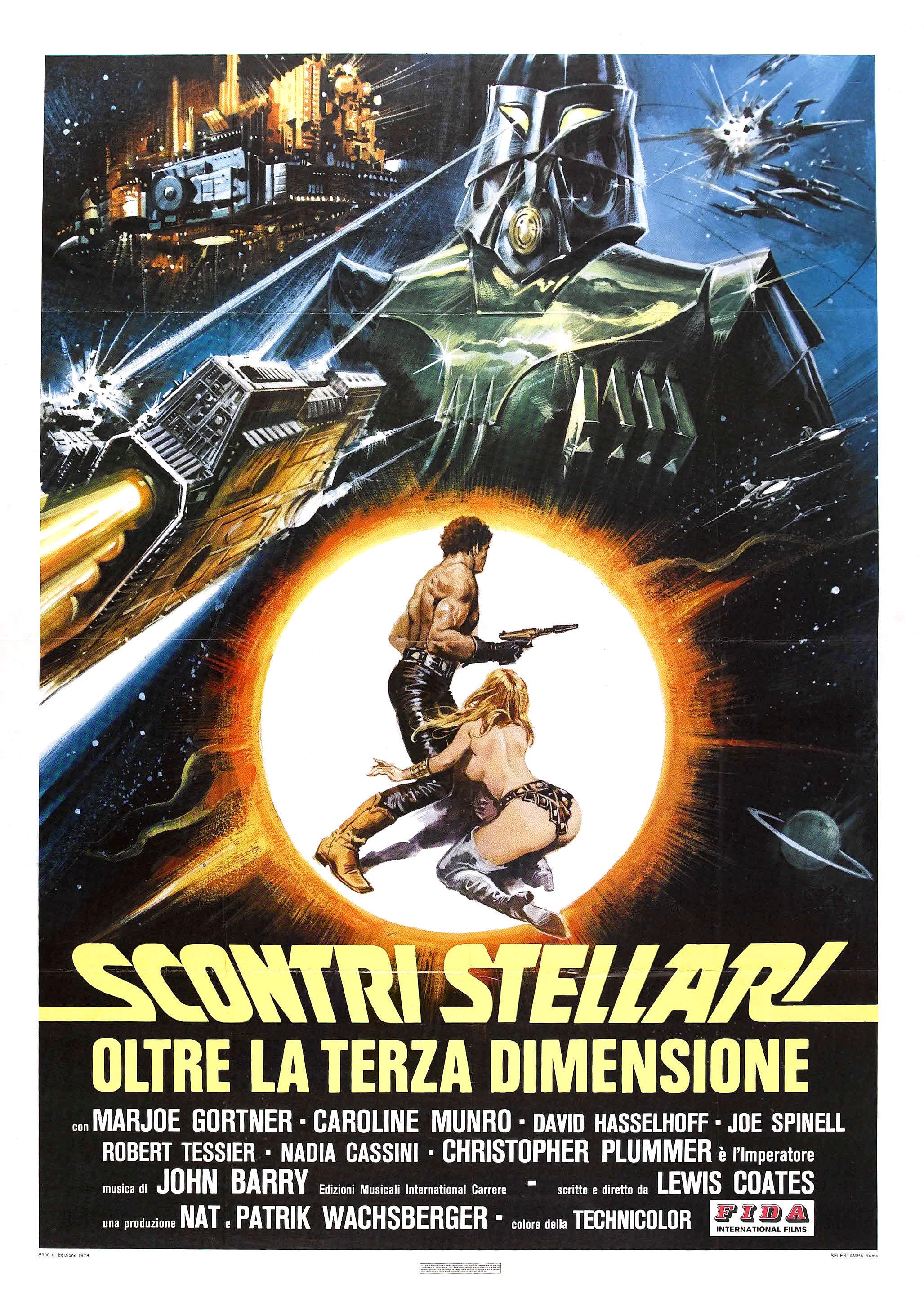 “Starcrash”, the sixth episode of the latest season of Mystery Science Theater 3000, starts out a bit flat. The film, much like this show, is a huge cult classic so Jonah and the Bots have the unenviable task of rising above the intentionally tongue-in-cheek attitude of the film and delivering some good one-liners. The last really good “space saga” episode was, of course, season 8’s “Space Mutiny”. Thankfully, the guys don’t attempt to recall that episode because, really, a) nobody should do the same trick twice and b) nobody wants to watch a re-hash of an older episode. For about the first half, the jokes are a mix, with the majority of them lampooning Stella’s baffling exploitative lack of clothing (let’s be real: even evil overlords would make sure she’s wearing something more than a bikini inside a MINING COLONY for crying outloud) and Elle, the robot with a puzzling southern drawl. The jokes don’t start hitting until the last half of the film when things really start to “happen” (I say that loosely because the plot is so incoherent; things just happen and nobody knows why). The greatest moments are when Akton takes on Thor in a fist-fight and the ending space launch when about 100 ships take off and Jonah and the Bots name them all after “Starcrash playsets”. Good stuff. 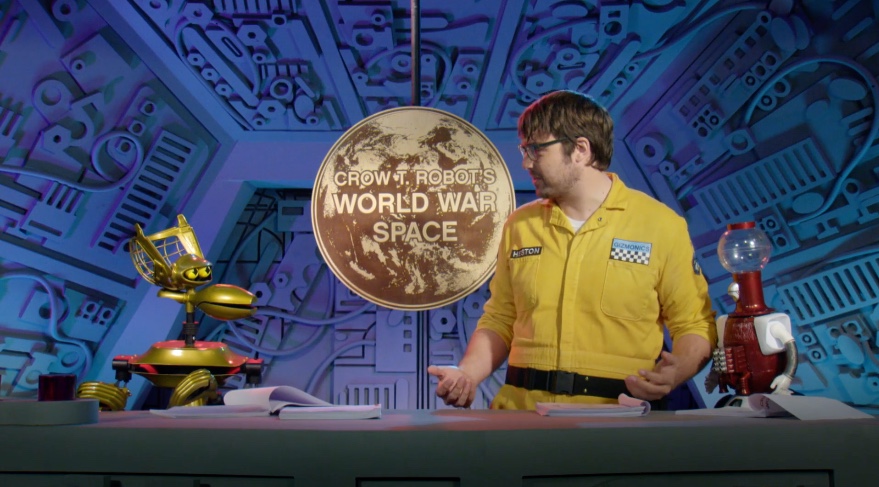 The show’s sketches are pretty good. After another suspect start where Jonah and the Bots play “Spin the Bottle” (PLEASE. GET RID. OF. THE COLD. OPENING.), The Invention Exchange also falls kinda flat with the Mads inventing a “Condiment Poncho” to go with a “Salsa Sombrero”. It’s salvaged by Servo as “BB-8”, which will be used to turn any movie into a blockbuster film. This culminates in the Servo being forced to dump the gimmick at the behest of “Disney, who said they’d crack his dome” if he ever pulled that again.

The middle three sketches are solid: 1) Crow writes “World War Space” where there’s “lots of complex world-building” and “PEW! PEW! PEW! SO much PEW! PEW! PEW!” 2) Akton (Jonah) visits the SOL and he’s better than the Bots who idolize him. Servo sees him as a father figure and wants him to show the Bots his arbitrary, plot-convenient powers. Akton can’t do it because he really has NO idea what they are how they work. 3) “Freak Masterstroke” (Jerry Seinfeld) visits Moon 13 and he’s got some great business ideas about how the Mads can be more successful with their dirty work. It doesn’t include holding the planet hostage with a death ray. MASTERSTROKE: “Are we REALLY still doing that?” It’s capped off with all hell breaking loose on the SOL with Jonah playing Zarth who laughs maniacally while the Bots score one-liners left as torpedoes are fired and stars are “crashed”…and Max and Kinga slack-jawed, wondering if their playtime counts as “being driven mad”. Very funny stuff. 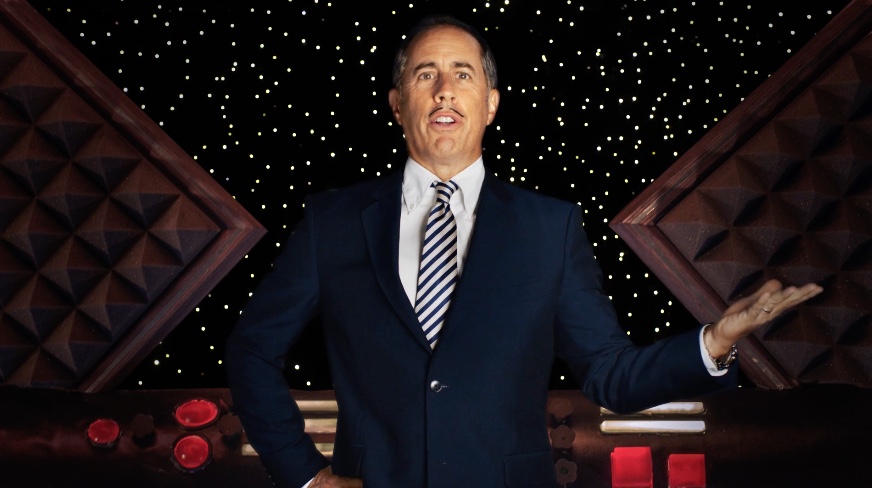 While “Starcrash” isn’t a masterpiece of an episode by any means, it’s still a fun MST3K to sit through. There are several great lines which reference everything from Alien to Planet of the Apes to a REALLY great The Force Awakens joke involving C3-PO’s red arm and the sketches are really solid with an amusing cameo from Jerry Seinfeld (an old friend of Joel Hodgson, the show’s creator) and a couple of moments lifted straight from the film. Mystery Science Theater 3000 continues to steam onward and I look forward to the next episode.

And, of course, here this episode’s gems:

(Spaceship roars over the foreground of the shot.)
JONAH: In space, nobody can hear you scream BECAUSE IT’S SO LOUD!!!

(Close-up shot of Akton who has a blond Afro style haircut.)
JONAH (singing to “The Greatest American Hero” theme song): “Believe it or not, I’m not William Katt!”

(STELLA is wearing a bikini in the mining colony.)
SERVO (as a prisoner looking at Stella): “Um…did you NOT hear we’re MINING today?”

GUARD: Planning an escape? This is what you’re gonna get, lady!
(The Guard strikes STELLA with a baton.)
CROW (as the guard): “A beating with a Fruit Roll-Up!”

(STELLA STAR runs through a field in the DAY after her NIGHT escape.)
JONAH: So, the building exploded so hard that it’s DAYTIME now?!

(We get a shot of the ship moving into the space horizon, away from the camera.)
JONAH (as a narrator): “Join Akton, Stella, Thor and Elle on next week’s rousing space saga, ‘NOTHING EVER HAPPENS’!”

(STELLA gets up to walk to the control room on the ship, somehow wearing less clothing that she was a few seconds ago.)
CROW: Did she lose some more clothes when they jumped to hyperspace?

(STELLA and ELLE land their shuttle on a beach.)
ELLE (motions toward two rocket booster shells, half-buried in sand): Look at that!
CROW (imitating Charlton Heston in PLANET OF THE APES): “DAMN YOU! YOU BLEW IT UP! I don’t even know what it is, BUT YOU BLEW IT UP!!!”

(STELLA and ELLE wander the beach and STELLA points at something off-screen.)
STELLA: What’s that?
ELLE: I don’t know…
JONAH: Why did she even bring the robot? He’s useless! (laughs to himself)

(Amazon women slowly ride up to STELLA and ELLE on horseback.)
CROW: That’s the thing about this movie: it’s not afraid to take its time to aggravate you.

(About 30 ships take off in a sequence that takes about two to three minutes.)
CROW: “How many spaceships do we own?! I don’t remember signing all these purchase orders!”

(Dead bodies are everywhere as Zarth walks around all of them.)
JONAH: Space Mountain with the lights on. They never show you how many people get killed on that ride. I took a secret Disney tour!

(ELLE is back after being destroyed earlier in the film.)
STELLA (approaches him): This is incredible. They rebuilt you but, how? You look marvelous!
ELLE: Very carefully, and they used the latest components!
CROW (as ELLE): “Perhaps you don’t recognize me with my RED ARM!”