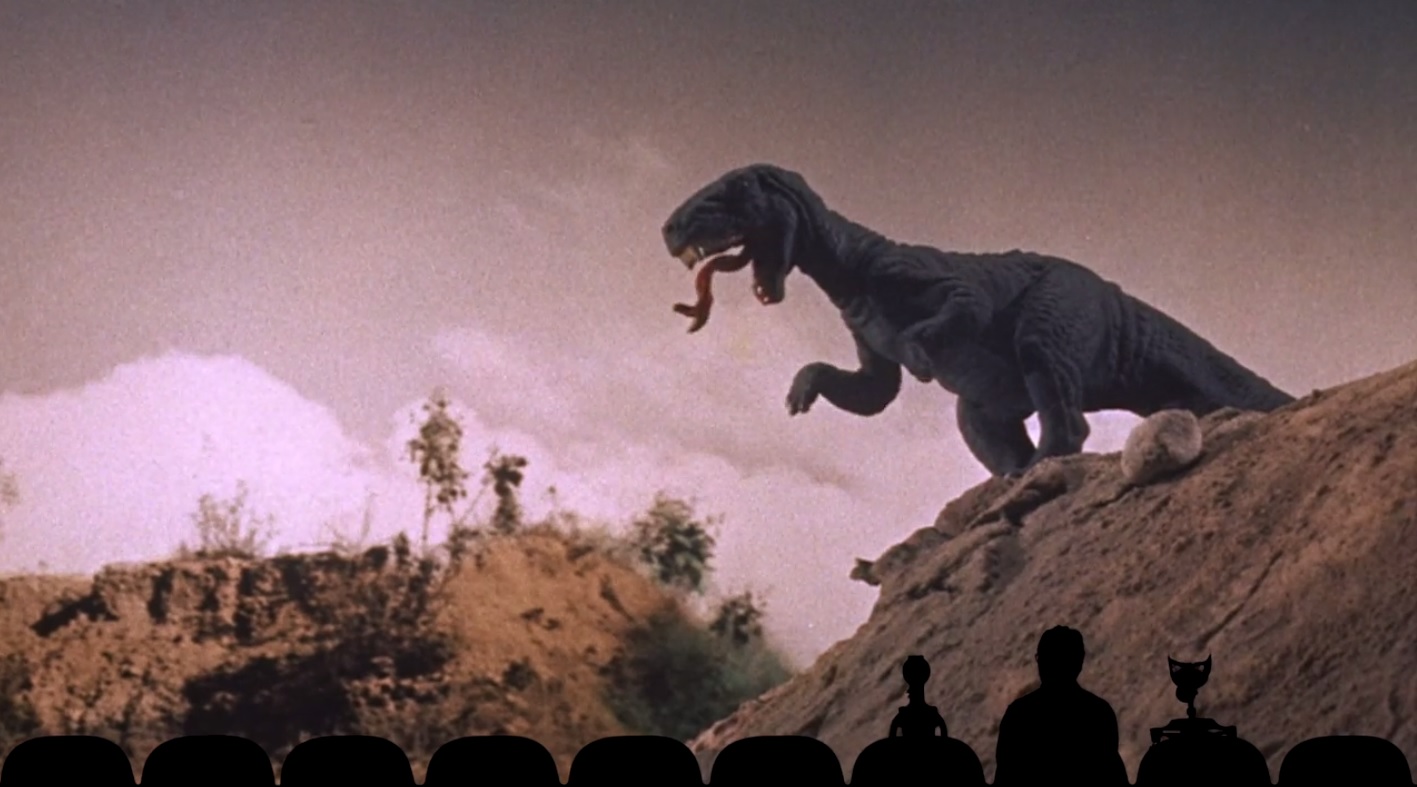 If you wanna look on the bright side, “The Beast of Hollow Mountain” is kinda like Marvel’s “The Avengers” in that both films take forever to get to the good part. But then, unlike “The Avengers”, this film continues to suck on toast. “Beast” stars Guy Madison as Jimmy, a cowboy who doesn’t listen to anyone, doesn’t care about anything but cattle and attempts to bed the town’s most beautiful woman, Sarita (Patricia Medina) — who’s already engaged to another man, whose ass Jimmy is forced to kick and emasculate because the man is rightfully jealous of Jimmy. There’s also talk of cattle and buying cattle and moving cattle. And how Hollow Mountain is “cursed” but nobody actually knows what the curse is besides local morons wandering into quicksand. Turns out the truth is even more dull. I’d yell “spoiler alert” but, frankly, 1) that phrase is overused, 2) this movie is over 50 years old and 3) nobody cares. Let’s be honest: nobody’s ever heard of the flick until now. And if you’re claiming otherwise, you’re lying. It’s an Allosaurus with a tongue that whips around like a pin flag at Pebble Beach. The movie is perfect fodder for Jonah and the Bots being a silly monster movie — even though the movie doesn’t show you the monster until about a good two hours into the thing. Though it’s terrible, it’s “good-bad”. It also holds the distinction of being 1) the first film to feature stop-motion special effects in color widescreen format and 2) the first film to ever showcase dinosaurs and cowboys in the same movie — all because the effects artist wanted to do a film about cowboys and dinosaurs. One out of two honors ain’t bad. 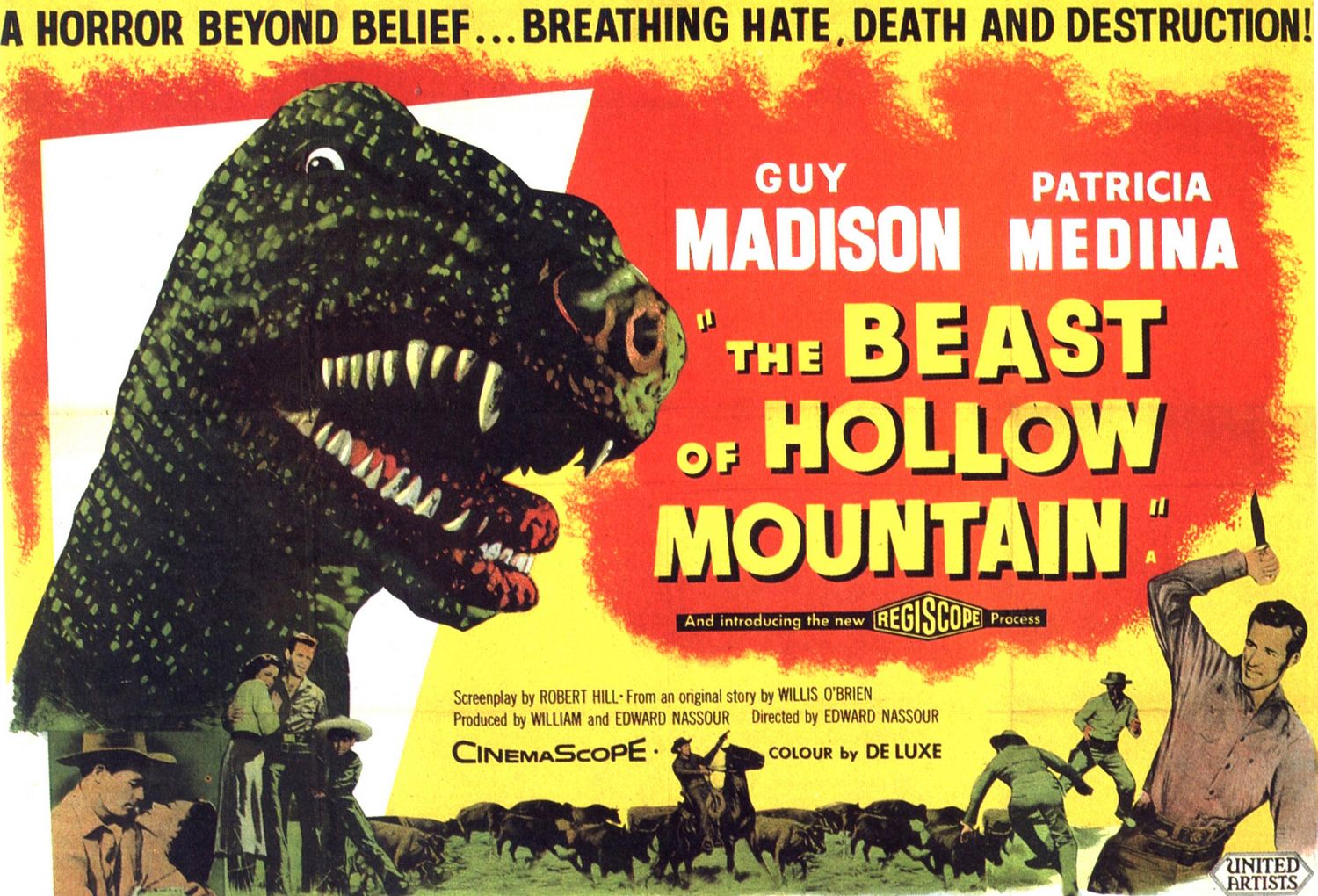 For the past two weeks, I’ve been saying that MST3K has been “decent but not great”. This episode breaks that streak. The actual “beast” doesn’t show up until nearly the final reel (much like last week’s “Avalanche”) but, instead of slow, inconsistent riffing on the characters, Jonah and the Bots let the movie have it, hitting jokes like the Warriors hit three-pointers. The film reminds me a lot, actually, of “This Island Earth” in that it’s actually visually-rich and beautiful to look at and features two fairly convincing leads in Guy Madison and Patricia Medina. And like “This Island Earth”, Madison and Medina end up overplaying their parts, coming across as a manly stereotype and a swooning female stereotype. So, it’s no wonder that the trio have fun going after Jimmy’s deep, manly voice or Sarita’s beauty (which, in the minds of Jonah and the Bots, causes Jimmy to stammer and say stupid things to “impress” her) and the various Mexican characters who are obviously what Americans think Mexicans are and what Mexico is. The movie is lighthearted and fun for the most part so that makes the episode flow well, too. 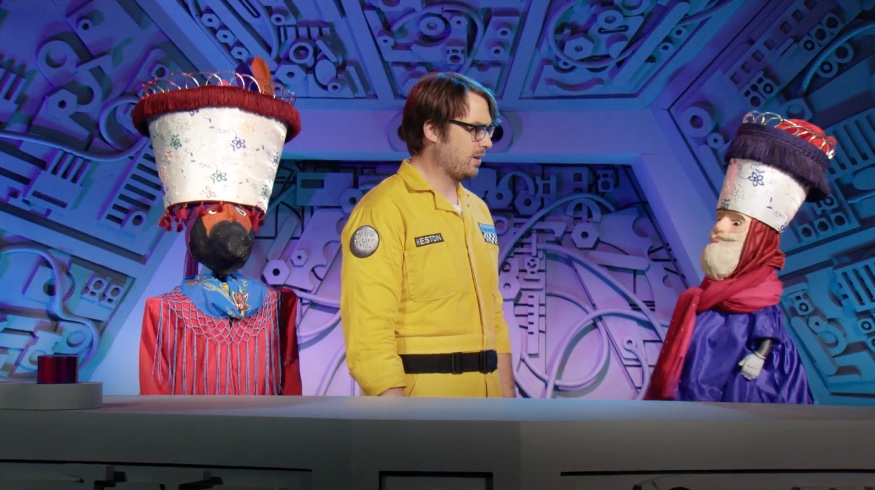 The sketches are really great this week. While the cold opening predictably dies (Jonah and the Bots have an art festival), the Invention Exchange is excellent. Jonah’s “Disco Cannon” (which shoots Disco Balls creating an instant disco “in any room”) is simple and hilarious, punctuated by Crow’s line, “Imagine how much better the Civil War would have been with one of these!” Kinga’s simple re-thinking of the Titanic tragedy (they would have survived if they had a firehose firing hot water at the iceberg) is well-played as is her pitch: “‘Iceberg dead ahead’? I DON’T THINK SO!” This is perfected with Max drinking from the hose after his workout and burning his mouth. Twice. Because he really IS TV’s Son of TV’s Frank.

The other sketches are also pretty great: Jonah asking the Bots to come up with their own monster movies, pushing Crow to make a formulaic, corporate thing with “Eddie Murphy playing all the monster’s family members” and Servo making a cerebral monster film where the monster is so depressed by his man-made condition that he takes his own life. Jonah asking for his “own movie sign” out of sheer depression is great. This is, unfortunately, followed up by a weak fashion show sketch where Crow, Gypsy and Jonah dress like characters from the film but culminates in a sketch that is nothing short of brilliant: Crow and Servo dress in Festival costumes from the film and dance around to creepy music while Jonah, Kinga and Max all freak out, wondering why the hell Crow and Servo won’t answer their demands to know what’s going on. The sketch is laugh-out-loud hilarious. The closing sketch, involving regular films made better with the presence of dinosaurs, is cute but rushed. 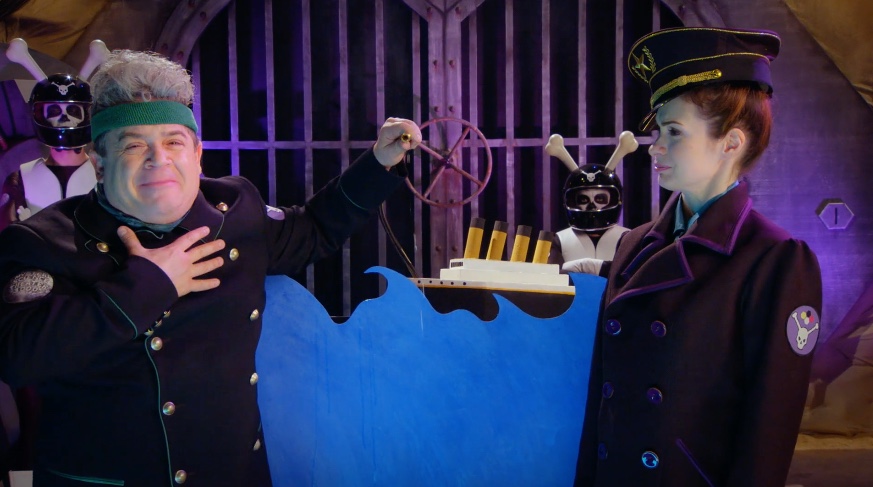 Given the fickle nature of most viewers and the cult-like status MST3K has achieved, it’s a relief that Mystery Science Theater 3000 recovered this week. Not only was the riffing fantastic, the host sequences are solid and Kinga and Max were in sync this time around and are given a lot more to do which is a win-win. It’s not a totally perfect episode but it’s next to “Cry Wilderness” as one of the best episodes of the MST3K revival.

As always, here are this week’s gems:

(Three men are on horseback, riding into the foreground of the shot.)
CROW: I guess this is only three-quarters of an apocalypse.

(Pleasant music plays as a young boy sits with a horse outside a cantina.)
SERVO: Well, THAT movie’s over! Time to start another one…

(The drunk man pesters his son who is waiting outside the bar.)
MAN: Your father is NOT a drunkard…he drinks to forget your Mommy who is in heaven!
JONAH: So, THIS is what became of “The Most Interesting Man in the World”…hmm.

(Drunk man stumbles to his horse and gets on.)
SERVO: Well, if there’s anything that spells “comic relief” like an alcoholic single father mourning his dead wife, I can’t think of it.

(The beautiful Sarita comes to the aid of the drunk man and his son after an altercation nearly causes an injury.)
SARITA: It’s ALWAYS like this! Always tequila! Never a thought for your son. Panchito, take your father back to the house.
PANCHITO: Si, Senorita. (To his father.) Come on, Papa.
SERVO: Mexican child services is HOT!

DON PEDRO: The drought is shrinking the swamp again this year from what the natives tell me…whenever that happens, there are always strange tales of men and animals disappearing.
ENRIQUE (with full American accent all of the sudden): Speaking of disappearing…
CROW (as ENRIQUE): “Has anyone seen my accent?”

(PANCHO and PANCHITO say good morning to JIMMY as they feed the ranch animals.)
JIMMY: Buenos dias! What are you doing here?
PANCHO: I’m milking the cow.
PANCHITO: And I’m feeding the ducks!
JONAH (as JIMMY): “But that’s a bull and those are pigeons…”

JIMMY: If Senor Panchito will be responsible for Senor Pancho, I think we give ’em a chance!
FELIPE: No!
JIMMY: Well, why not? If Panchito backs up his father and I back up Panchito and you back ME up, how can we lose?
CROW: So MANY ways…

FELIPE: A kid and a tequila hound to help run the ranch…
SERVO: Tuesdays on TLC!

(ENRIQUE and several men stand in the village, looking at documents.)
JONAH: They’re looking through the script to make sure there’s actually a “beast” in this movie.

(ENRIQUE and JIMMY fight in the village. One of the men crashes into a table with a bunch of beautiful plates and bowls on it.)
JONAH: My Etsy products!

(ENRIQUE wears a jacket enclosed by a large pin resembling pearls.)
JONAH: Are those sea shells on his jacket?
SERVO: I think you mean “YES” shells.

(We get an establishing shot of a Spanish village.)
CROW: Wow! Machu Picchu!
SERVO: Machu Picchu is in Peru.
CROW: Huh…so they filmed this movie in Peru?
SERVO: Would you just–!
(SERVO tries to lunge and CROW but JONAH holds him back.)

(JIMMY and ENRIQUE ride into town and visit SARITA.)
JIMMY: Buenos Dias, Sarita.
SARITA: Didn’t you recognize me?
JIMMY: I thought you didn’t want to be recognized. Last time we were seen together…
JONAH (as JIMMY): “It turned into SummerSlam…”
JIMMY: …we caused a little trouble.
SERVO (as SARITA): “I don’t remember that…”
SARITA: I’m sorry for what happened. I’ve spoken to Enrique…and there will be no more misunderstandings.
JIMMY: That’s all right with me!
CROW (as JIMMY): “They set up a fruit stand. Mind if a Take a moment and slam myself into that?”

(PANCHO helps his son, PANCHITO, off a horse. They walk to an abandoned shack.)
SERVO (as PANCHITO): “Papa, I thought you said we were going to the Chuck E. Cheese.”
CROW (as PANCHO): “It’s not Chuck E. Cheese, but there ARE mice here.”

(The villagers prep for the festival. Two women talk to one another as they climb stairs.)
CROW (as one of the women): “Oh my god! Did you hear Pancho died?”
SERVO (as the other woman): “Yes, I heard a BEAST did it!”
CROW (as Woman #1): “From Hollow Mountain? That’s CRAZY! There’s no beast in this movie!”

(Festival starts with people in really weird costumes dancing around. ENRIQUE wanders through them.)
SERVO (as ENRIQUE): “What the HELL?! I LIVE here and even I don’t understand what’s going on!”

(The Beast FINALLY appears and roars, sticking his long tongue out.)
JONAH: Ah! A Gene Simmons-osaurus!

(JIMMY has ENRIQUE in tow on the back of his horse. JIMMY forces his horse to ride sideways down a dirt hill.)
SERVO: I don’t think this was discussed with the horse’s agent…
CROW: Or the HORSE.
JONAH: “SEVERAL horses were hurt in the making of this film.”
SERVO: And don’t forget the turtle the catering truck hit.

(During JIMMY’S fight with the dinosaur.)
JONAH: Has anyone said “Watch out for snakes” yet?
CROW: Yeah, I think we did that.
JONAH: Oh…we should have saved that for NOW.