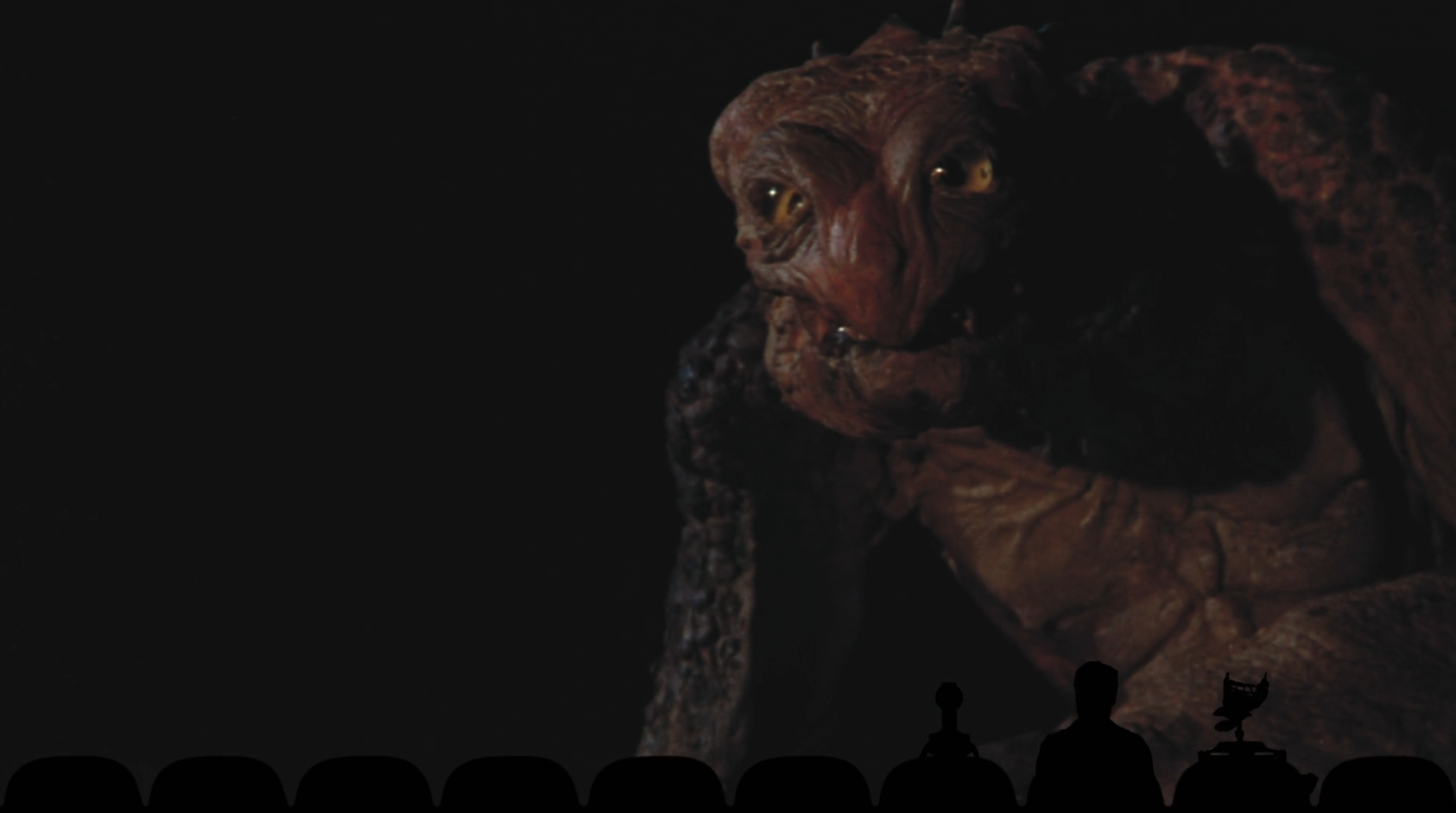 WARNING: This review contains spoilers about a surprise guest star. If you don’t want to have this spoiled for you, leave now. YOU HAVE BEEN WARNED.

From producer Charles Band comes…whatever the hell this was supposed to be. Discouraged by the flop that was season seven’s Laserblast, producer Charles Band got high (or drunk, depending on who you ask) and wrote a bunch of stuff on a typewriter. After waking up four days later and examining what he had written in his feverish state, Band initially tossed the page into the garbage next to the two bottles of Jack laced with acid. However, upon seeing that his car was about to be repossessed, Band immediately took the crumpled paper (what he now called a “treatment”) to every major studio who summarily laughed in his face. Band eventually made the film, paying for it out of his own pocket with all the remaining $17.83 he had for beer. After three different casts walked off the set upon reading the completed script (which Band refused to change in any way; something about “Spielberg knowing his name after this sucker”), Band just hired another cast, told them nothing, fed them lines and then edited in all the VFX in post. At least, that’s what I read about the film on Wikipedia. Before they deleted my contribution because “it wasn’t verifiable”. Schmucks.

The Day Time Ended is, ironically, about a night where time never ends. It features an old man and his family standing their ground against one or more of the following:

Also, there’s no explanation for what actually happens at the end…though “everything is fine”. So…there’s that.

As you can see, things were a lot simpler when Billy turned green while wearing a laser cannon on his arm. 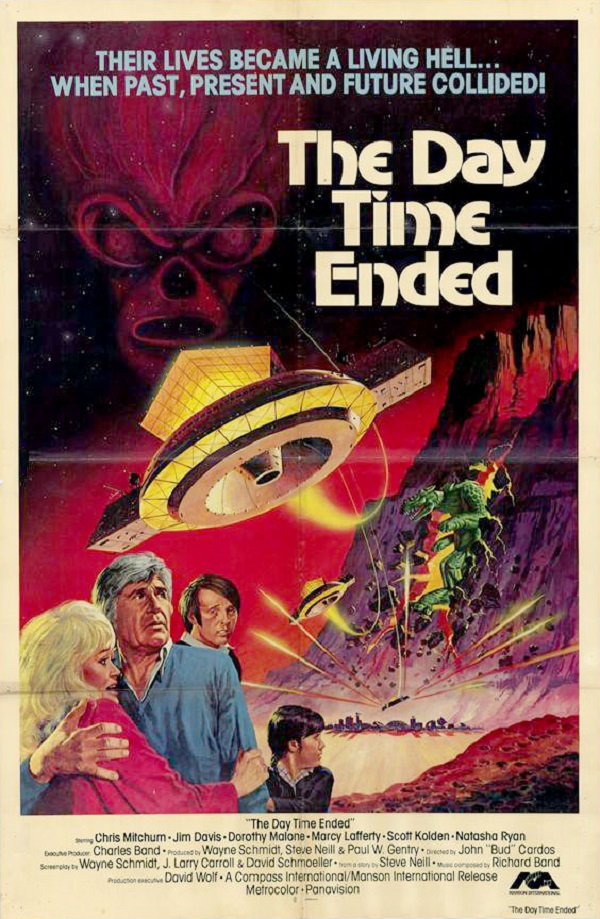 Whew, this movie…remember last year’s Cry Wilderness where Jonah and the Bots lost control and began rage-riffing in spots? That’s about how this is. Only there’s a lot more control. If you want evidence that the riffing is a little tighter, look no further than this experiment. If you look at this week’s gems, the entire light switch sequence is beautifully riffed with Jonah and the Bots taking the pain in stride, sarcastically clapping at the end of the scene, one that, appropriate to the film, has gone absolutely nowhere. Servo’s line about the film’s seemingly lazy nature just before the cut sums it up beautifully: “This whole movie is like the cold open to a Columbo episode.” It is that and more. Other riffs play on Grant’s gruff, somewhat grizzled nature, inventing a running joke in his imaginary love of “Steak Milk” (Grant loves grilling steaks and the joke is that he craves it all the time, infusing it into his night-time glass of milk; it’s funnier than it sounds) and several jokes are made about Jenny, the annoying kid who knows everything but who the adults ignore all the time despite the fact that she keeps saving their butts at every turn.

The skits are…interesting. The first one doesn’t really go anywhere and, once again, plays on Grant’s old man act while the second skit gives us another song about the insane, overloaded script this movie has. It’s cute but not completely memorable. The good news is that the running plot about the ship that blew up portions of Gizmonics Institute has begun to pay off. The culprit is revealed to be none other than Dr. Laurence Erhardt, Dr. Clayton Forrester’s first assistant from the very first season of MST3K. It’s revealed that he stole the ashes of TV’s Frank and Dr. Forrester in order to scatter them across the galaxy — but he needs Kinga’s help in obtaining “Idiot Control Now”, the terrible pop song from Season Three’s Pod People because the Mads loved that song and that was their wish. Where this is going is anyone’s guess but at least it was nice seeing Josh Weinstein reprise his role…as much as that’s possible. Frank was an arguably better “second banana” but the ending’s reveal of Erhardt includes a funny moment where he asks Max if he’s “a third banana or a second banana, once removed”. Very clever. Also much better (and I’ve been meaning to mention this) is the chemistry between Patton Oswalt and Felicia Day as Max and Kinga, respectively. One bit in particular has both of them drinking java from their cozy-looking oversized coffee mugs — which Max reveals are really empty. “We should actually put something in these cups one day,” he says to an apathetic Kinga who continues to give the illusion of drinking something as she waves off his oh-so-silly suggestion. 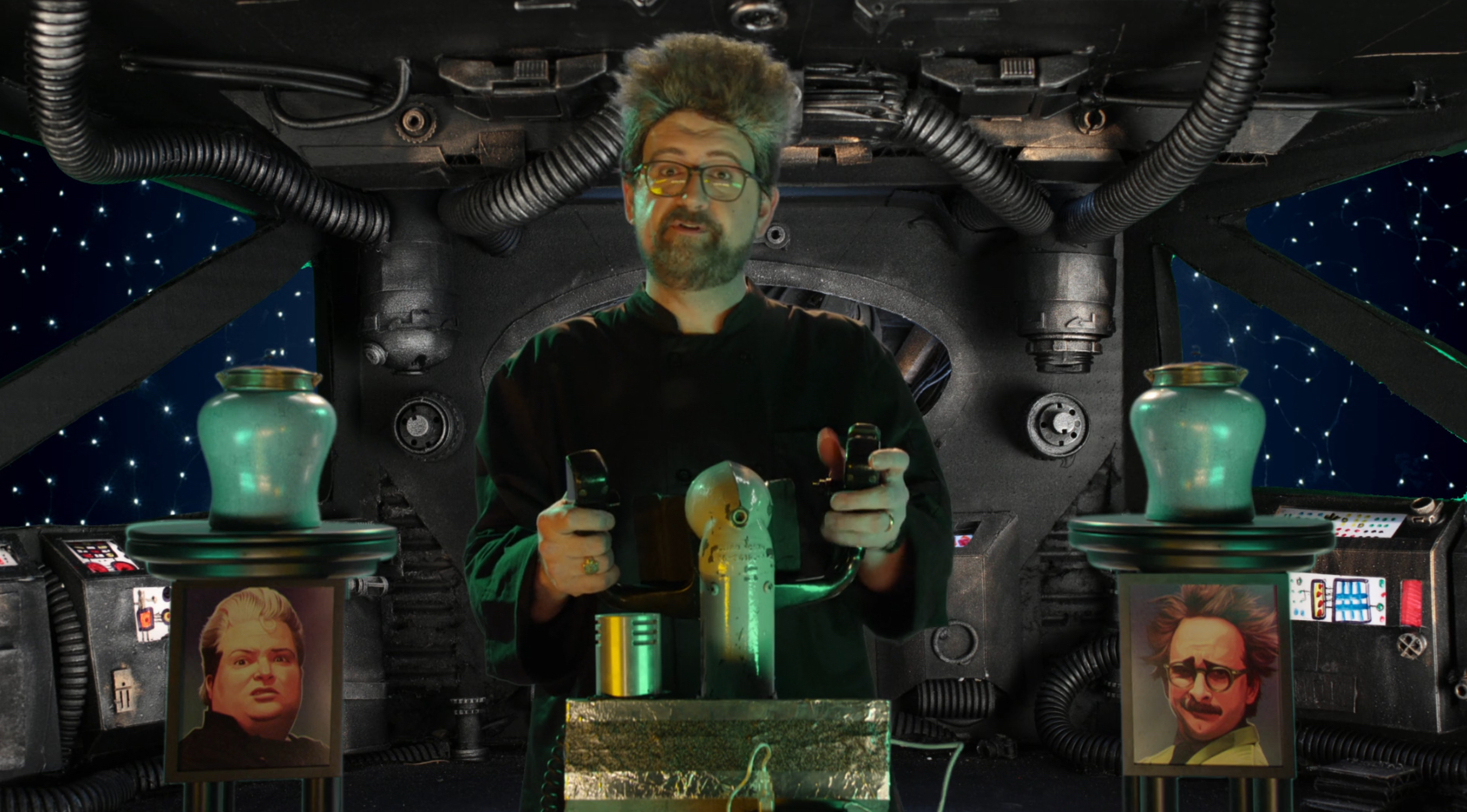 We are officially over halfway through “The Gauntlet” and the show has found its rhythm. I look forward to the final two episodes with gusto.

GRANT (to STEVE): Wait until you see the surprise I got for you!
JENNY: Me too?
SERVO: No, just him.

GRANT: Now, you wait right there, Jenny. You too, Steve. Close your eyes. Both of ya’.
GROWLER: It’s gonna get weird…
GRANT: Don’t you open ’em until I tell ya’…ok?
M. WAVERLY: Someone’s not closing their eye!
JENNY: I bet it’s a puppy dog!
RICHARD: It’s better than that!
GYPSY: A puppy cat?!

(STEVE tries to get his wife out of the trip but can’t. He walks with his wife.)
STEVE: Sorry, honey…there’s no way out of it.
JONAH: Gotta finish the WHOLE movie…

(JENNY discovers and starts to investigate a strange glowing green pyramid behind the house.)
JENNY (to pyramid): Have you seen my new pony?
SERVO (as Jenny’s mom): Don’t talk to the Lovecraftian obelisk, dear!

(RICHARD goes to kiss his wife, BETH.)
SERVO (as RICHARD): So, I just, uh…put my mouth…
(BETH breaks it and goes to hug RICHARD.)
SERVO (as RICHARD): …oh, oh, oh, nope, ok! Maybe if you, uh…the hugs are good…
(JENNY comes running over)
JENNY: Bye, daddy!
JONAH (as RICHARD): Oh, were you there the whole time, baby?
(RICHARD picks Jenny up and hugs her.)
RICHARD: You be a good girl for Mommy, now, ok?
JENNY: I will, daddy!
RICHARD: All right, I’ll see you tomorrow!
(RICHARD puts her back down and goes to kiss his wife again.)
CROW: Bargain-Bin Mark Hamill’s gotta get his make-out on!!!
(RICHARD kisses his wife.)
(CROW makes munching and chewing noises.)
(They break and RICHARD gets in the car, shutting the door.)
SERVO (as RICHARD): Oh! And we built this place on top of an ancient Indian burial ground! Have fun now!

(GRANT and his wife go for a walk at night.)
CROW (as GRANT): Yeah, it’s nice to walk out around here…alone…just you, me, my service pistol…the coyotes…our insurance policy…you get me…
GRANT: Listen…
(JONAH makes a fart noise.)
GRANT: Listen very, very careful, sweetheart…
CROW: The sound of condescension is soft and low…
ANA: I am completely tuned into the silence…and turned on by it…isn’t that what you wanted me to say?
JONAH AND THE BOTS: NO!!!

(We see a shot of the mountain range at dusk.)
CROW: EE-GAAAAH!
(JONAH turns and high fives CROW.)

(The kitchen starts glowing green behind GRANT.)
ANA: Grant…somebody’s in the kitchen…
JONAH: …with Dinah…
ANA: Look, it’s green…
GRANT: I just left there…it couldn’t be…
ANA: Go see…
(The two walk over to the kitchen entrance.)
SERVO: Aw, hell! Someone just Simple Greened our entire kitchen!
(GRANT looks in the kitchen, then turns the light switch off, then on. The green light vanishes and normal light fills the room. The two smile, content.)
CROW (as GRANT): Heh! I solved the kitchen riddle!
GRANT: Seems to be okay…
(GRANT switches the light off…then on again. He shrugs.)
SERVO: …aaaaand RACCOONS!
ANA: See? It was just that solar power thing!
CROW: …the SUN?!
GRANT: That’ll do. I’ll check it out first thing tomorrow…
ANA: Right…
(GRANT switches the light off…AGAIN.)
JONAH: And, that, ladies and gentlemen, was the light switch scene…
(JONAH AND THE BOTS clap.)
SERVO: Classic…
(GRANT and ANA walk back to the bedroom.)
SERVO: This whole movie is like the cold open of a Columbo episode.