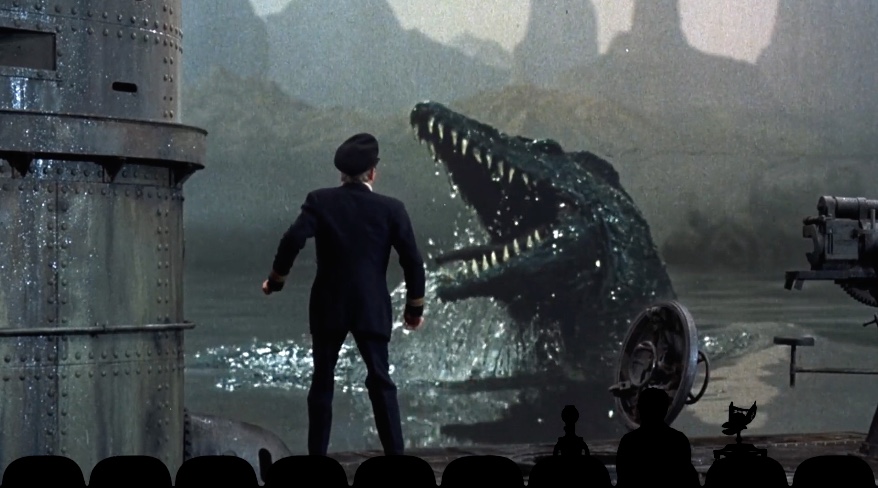 Famed character actor stars in “The Land That Time Forgot”, a not-too-terrible adventure flick where Germans, Britains and Americans work together when they somehow find themselves on an island full of prehistoric beasts and primitive cavemen. No, it’s not a metaphor for Trump’s America, it’s an actual prehistoric island. So, the three countries do what white countries do best, kill everything they see and use one of the cavemen as slave labor to steal, er “LIBERATE” the oil supplies. Also, Doug McClure is in this which, depending on your age, means you’re like, “Hey, that Western actor” or  “That’s that one dude from ‘Out of This World’, right?” Either way, the audience loses. 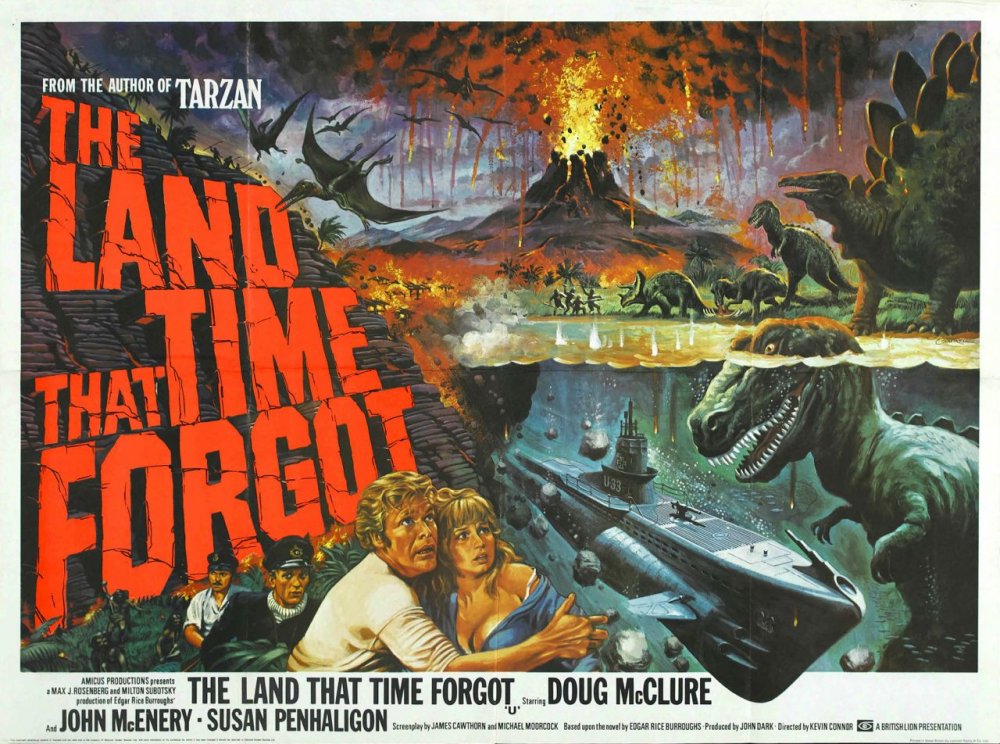 “The Land That Time Forgot” is actually a pretty decent. I saw it one late Friday night when my Mom wasn’t home and there was nothing else on TV that was worth watching. All these years later, yeah, it’s pretty dated and silly but there was conviction in the cheese that was this film. The reason Jonah and the Bots’s jokes work on something this silly but are agonizingly and frustratingly wasted on films like “Starcrash” at times is because this movie took itself so seriously. And why shouldn’t it? The effects, even now, are pretty good. Take a look at the featured image up there. That’s quality stuff. In any case, Jonah and the Bots due a great job here. They don’t overplay their hand, they simply go with the flow and get their hits in and, over the course of the entire episode, the riffs are totally solid. The butt of their noise is, of course, the late Doug McClure who plays the square-jawed hero in this thing. The problem is that McClure is actually a decent leading man so they end up defaulting, mostly, to the German and British cast antics which means you’re bound to get a “Sound of Music” riff and several jokes about submarines (brilliant are the bits about finding Spongebob and the Yellow Submarine parody) which are funny even as predictable as they may be. 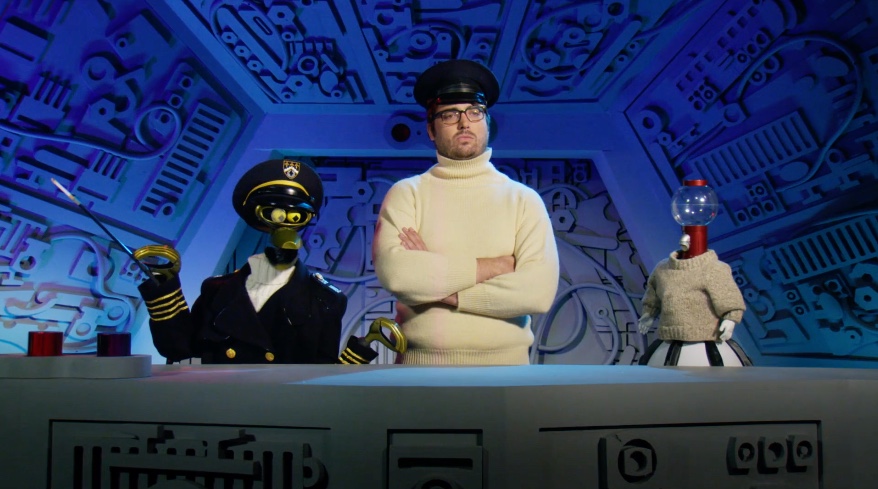 The sketches range from solid to “oh, ok”. The show’s cold open involves Gypsy’s birthday with Jonah being sucked up to reenact the show’s opening (again) but, this time, that’s actually worked into the sketch which is a step into the right direction. The Invention Exchange is pretty good stuff: Jonah invents a “Living” home magazine written by M. Night Shyamalan. Every single article in the magazine contains a “twist” of some sort. It gives us a great line from Max: “The ’15-minute Salmon’ only took 10 minutes! I gotta re-read the recipe, see if I spot all the clues!” This leads to the Mads’ invention: The Elder Pump…which…does…they have no idea what it does? Why? Because they invented a thing named after what Crow said last week in a riff, causing Crow to lose his cool: “HEY! THAT’S MY INTELLECTUAL PROPERTY YOU THEFTED!” This is good stuff

The rest of the sketches, however, are a mixed bag: 1) Jonah and Crow are German U-Boat sailors while Servo is the know-it-all Doug McClure. An octopus attacks the SOL in space and then apologizes. Cute. 2) Max and Kinga try to sell Jonah and the Bots on their new business: their dinosaur ranch where they raise and (by their own admission) cruelly kill dinosaurs for food — but that’s okay! Dinosaurs came BEFORE the whole animal meat regulation thing! Plus, it doesn’t matter because they have a company jingle that makes it all okay! This was the best sketch of the night. 3) Crow thinks he’s going to evolve into a human. Jonah has to talk to him about these things. Once again, cute but not great. And then we close out with Jonah sending a help note in a bottle into space — where Max excitedly picks it up. The whole thing is worth it for Kinga angrily tearing the note up several times, aiming each and every rip toward Jonah and Max as if to get a point across. 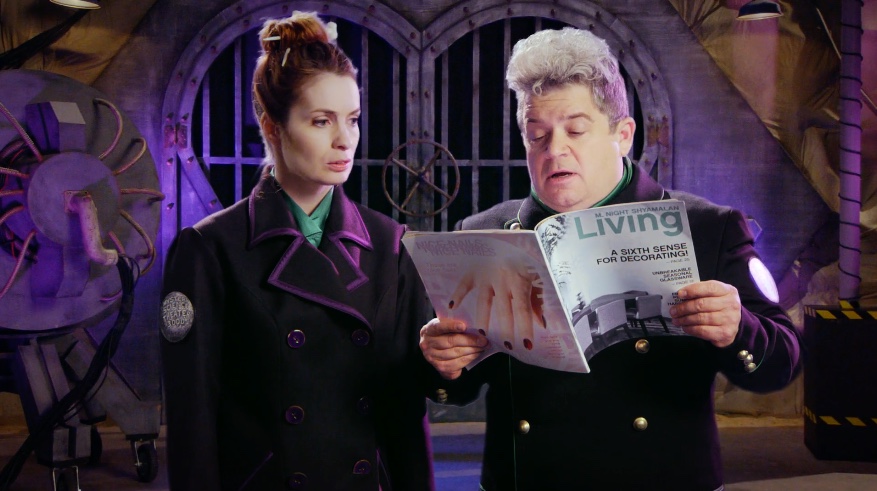 We’re officially halfway through the new season of Mystery Science Theater 3000 and, so far, I like what I’m seeing. “The Land That Time Forgot” is a solid episode with some great riffs even if it does have spotty sketches. It all evens out. The even better thing is that Mystery Science Theater 3000 is coasting along with no real bumps. Yes, there are some rough spots that need to be worked out but this show feels like home again and I have a feeling that it’s only going to get stronger as it goes along.

(LISA and BOWEN float on the ocean in a lifeboat.)
LISA: The ship?
BOWEN: We were torpedoed. Looks like we’re the only survivors.
SERVO (as BOWEN): “We’d better get to repopulating this boat!”
LISA: Will they find us?
CROW (as BOWEN): “Yeah! They’ll find a fat ME and a skeleton YOU!”

(A passing boat with a crew tries to find Bowen’s boat. The fog is thick around them.)
BOWEN: AHOY!
MAN: AHOY! Where are you?
BOWEN: OVER HERE! AHOY! OVER HERE!
JONAH (as the MAN): “In fog, ‘OVER HERE’ is not really a useful direction!”

(BOWEN outlines a plan to hijack a German U-boat as it surfaces and convinces BRADLEY to help.)
BRADLEY: Right…let’s try it! (to the rowing crew) Pull away!
JONAH AND THE BOTS (as the rowing crew): “Row, row, row your boat, gently to our deaths!”

(BOWEN and BRADLEY’S men successfully board the U-boat.)
DIETZ: Well, Commander…now that you have us, what do you propose to do with us?
BOWEN: I’ll tell you what we’re gonna do with you, Captain: put you in the nearest British port.
JONAH (as BOWEN): “Then? Disneyland.”

(A German sailor destroys the submarine’s radio by setting it on fire. BOWEN inspects the damage.)
SERVO: Another bang-up job from Comcast Customer Service!

(The German U-Boat sails above water.)
JONAH (as BOWEN): “Day 43: We still don’t know how to go underwater…”

(BOWEN and BRADLEY inspect nautical maps.)
BOWEN: My guess…is right here.
BRADLEY: But that’s South America.
JONAH (as BRADLEY): “That’s the opposite America of what we wanted.”

(The sailors tell a tale about how another sailor couldn’t find port on an ancient island.)
BOWEN: Well, we’ll have to do what he couldn’t do…find a place to land. If we don’t…
SERVO (as BOWEN): “…we start a new species of fish-McClures.”
BOWEN: …we’ll die.
JONAH: Which option will end the movie SOONER?!

(Cheerful music plays and light is seen in the water.)
BOWEN: I think we’re through!
CROW: For one thing, the music on this side of the tunnel is so much more cheerful!
SERVO: Yeah, I feel like I’m about to see Flipper!

(The sub rises above water. BOWEN checks out the land above.)
BOWEN: What a sight…
(A dinosaur suddenly lunges at the periscope, covering it. BOWEN cringes away, frightened.)
SERVO: He’s still having flashbacks from Dinosaur ‘Nam.

(A dinosaur attacks the sub when the sailors go outside to check things out. BOWEN fights back, shooting at the creature.)
SERVO: So, that creature’s probably endangered, right?
CROW: Oh, sure. Last of its kind. A priceless treasure. His sweat cures cancer, blah, blah, blah, KILL IT! KILL IT!!!

(A dinosaur attacks the sailors in the woods. They all fire their rifles at it, to no avail. Another sailor draws a handgun and fires it.)
CROW: Oh, good! A smaller gun! And, if that doesn’t work, you can throw your shoes at him!

(Ahm, the captured caveman, explores the submarine, curious about all the gadgets it has.)
LISA: What an amazing experience it must be for him!
BRADLEY: No more amazing than finding ourselves here, Miss Clayton.
BORG: His companions were a great puzzle. Some were almost like apes. Others, closer to, uh…
CROW (as BORG): “…Kid Rock fans.”