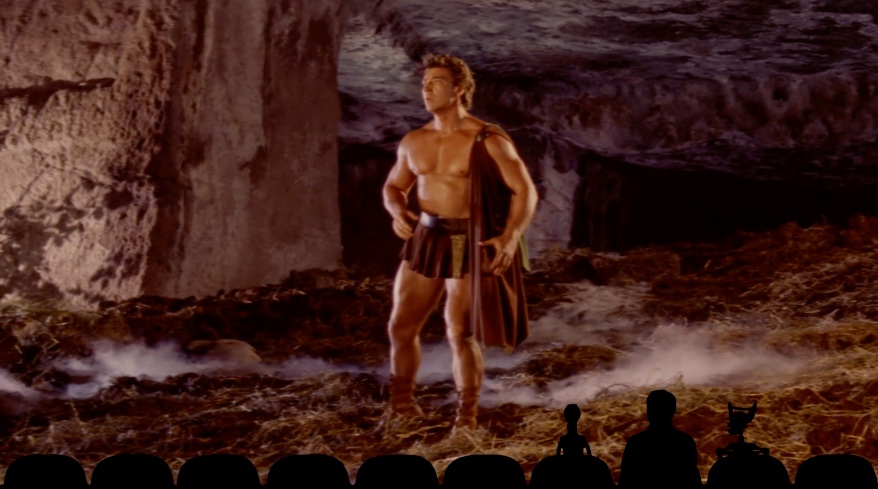 Like your Hercules films with sumptuous, lavish visuals? Yes? How ’bout if they added in some Jayne Mansfield? All right…we’re doing good so far! What if we threw in Jayne Mansfield’s dopey then-husband Mickey Hargitay as Hercules? What? He doesn’t need to really act, he just needs to look the part! All right…you’re still with me…what if there was a monster battle with a giant Hydra that couldn’t really do anything but move its heads around? No? Well, what if Sasquatch was in this movie for no reason? Wait…where are you going? 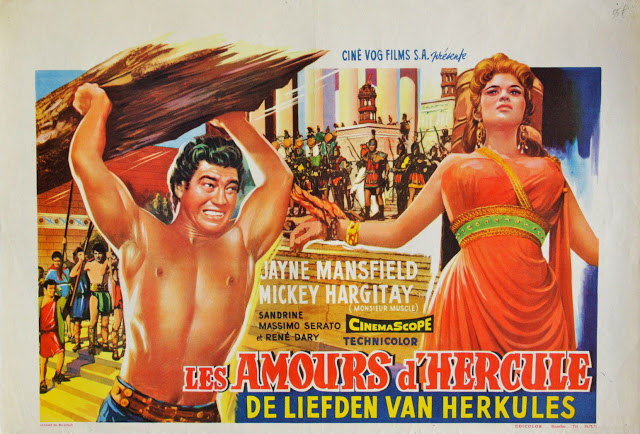 “The Loves of Hercules” comes to us in the fine tradition of other Hercules films which have crossed MST3K’s radar like Hercules Against the Moon Men, Hercules Unchained, and Hercules and the Captive Women. Those episodes weren’t exactly “classics” but, hey, we’re in a new era. Even if the Hercules experiments aren’t all that fun, it still has the attraction of being a European film and MST3K has been nails with stuff like The Magic Sword, The Magic Voyage of Sinbad and The Day the Earth Froze. Unfortunately, The Loves of Hercules is boring as all hell. And, yes, I’m talking both the film and the riffing. Aside from a few gems (listed below), the writers seem to have a massive off-day here with nearly nothing landing for a good belly laugh. Making fun of Hargitay’s accent can only get you so much mileage and attempting to take swipes at character names is really only funny once. The problem, I think, is that there’s a lot of downtime in the film. Between the “action” sequences is a LOT of talking and there isn’t much Jonah and the Bots can do with that. 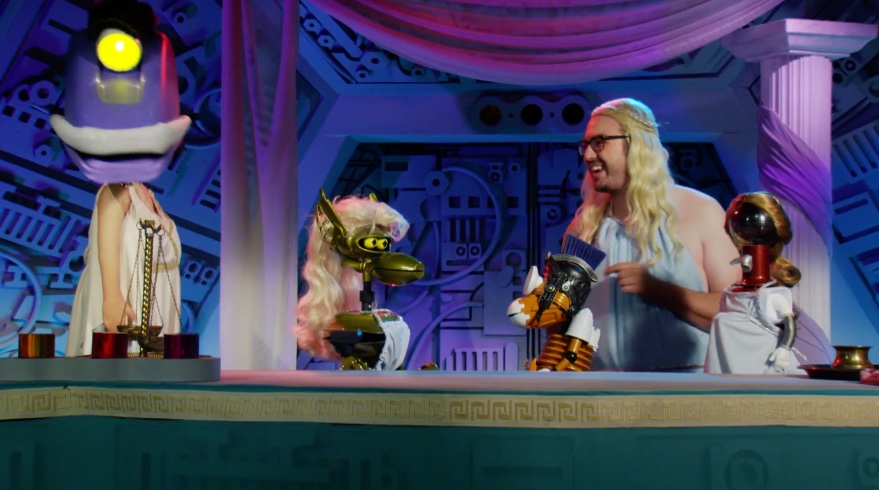 This also means that the sketches suffer: Jonah and the Bots binge “Wings” which is funny because it’s 20-something years old and you can’t really “binge” it unless it’s on TV; Jonah and the Bots invent a Turkey Dunk Tank which Jonah really doesn’t want to use — until the Bots start claiming that the turkey’s been talking smack behind Jonah’s back (this is the best of the episode) while Moon 13 invents a Mexican Jumping Bean Bag Chair — which doesn’t work because Frank inadvertently killed the moth larvae that makes a bean “jump”; Jonah is put through the “axe-throwing trial” from the film, only to have random stuff tossed at him instead (extremely lazy and unfunny); Crow and Tom have a heated political discussion about Hydra conservation as Jonah stirs the pot (cute but lacks a punchline and just goes and goes until we get Movie Sign); a new Bot visits the SOL during the Amazon harm sketch — only to have the Bots kill it because “we really don’t need a new little kid on the show” (funny meta but mean-spirited; the new robot could have been a running joke on the episode and it just wasn’t). So many missed opportunities.

The episode seems unfortunately lazy with the cast and crew hoping that the film makes up for the by-the-numbers writing. One thing I’ve been seeing that really annoys me in general is this weird decision to attach a mannequin’s body to Gypsy’s head during some sketches so it makes her look like she’s got a full human body. Never has the decision to make Gypsy’s actual tube body run around in the air ducts looked so ill-advised. Not only is it unfunny but it’s borderline creepy and looks really odd and off-putting. There isn’t much from Moon 13 either. Where’s Cynthia? Wasn’t she supposed to be a supporting character on this show? We haven’t really seen her since Pearl dropped her off and there hasn’t been much mention of her anywhere. 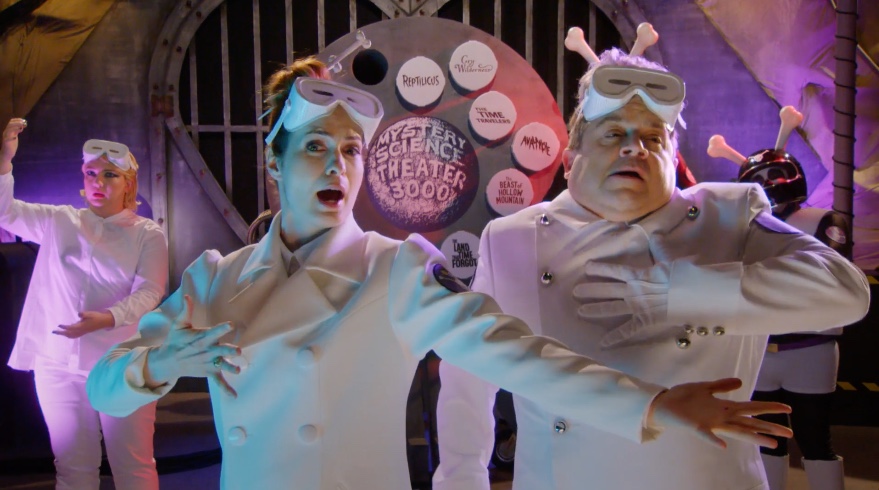 “The Loves of Hercules” is, easily, the worst Mystery Science Theater 3000 has had to offer its audience since its return. It makes other lower-tier episodes like Avalanche look genius in comparison. I really love this show to death but, contrary to Servo and Crow’s objections, it feels like it needs something to spice things up. After eight shows, it’s hard not to notice that things are becoming a bit formulaic. Instead of new, recurring characters, we’re getting celebrity cameos. It’s all well and good to see celebs and long-time fans of the show like Jerry Seinfeld and Neil Patrick Harris make their mark on this show, it also feels undeniably cheap at times. And, so, “The Loves of Hercules” joins the pack of MST3K Hercules experiments that didn’t quite turn out the way we thought it would. Hopefully, we get a nice recovery in the next episode because we’re do a “great” one.

And, of course, here’s this week’s gems…

(HERCULES walks into the middle of the city which is so large, it makes HERCULES look tiny.)
CROW: “Welcome to giant bowling with Andre the Midget!”

(ALEIA comforts DEIANIRA and begs her not to go through with trials that may kill her.)
DEIANIRA: Aleia, come. You must trust the Gods. I want to prove that my father’s guilt has been expiated.
CROW: “Expiated”?! THESAURUS: THE MOVIE!!!

(DEIANIRA introduces her husband to HERCULES.)
ACHILLES: I am Achilles.
JONAH (as ACHILLES): “Oculo Rift.”
ACHILLES: Let me thank you for having saved the life of my wife-to-be.
(HERCULES stands there with a dumb look on his face, his jaw dropped in confusion.)
SERVO: Buffering…
JONAH: Processing…
CROW: Compiling…
HERCULES: What…?!
JONAH: Download complete.
(HERCULES again stands there, slack-jawed.)
SERVO: Buffering…
JONAH: Processing…
CROW: Compiling…
HERCULES: But, then, you…
JONAH: Download complete.

HERCULES: The murderer of Achilles must have used my dagger for his plan!
DEIANIRA: But we were only three…I, Achilles, and Philoctetes.
HERCULES: Yes…Philoctetes.
(HERCULES turns and looks at a soldier who averts eye contact.)
SERVO (as soldier): “I am not Philoctetes…”
(The camera cuts to Licos who looks suspiciously at HERCULES.)
JONAH (as LICOS): “I know I’M not Philoctetes…”
(HERCULES stands there, looking confused.)
CROW (as HERCULES): “Then I must be Philoctet–.”
HERCULES: But WHERE is Philoctetes?
DEIANIRA (rises from her throne): Go and find Philoctetes and bring him here immediately!
JONAH AND THE BOTS (as people in room): “PHILOCTETES!!!”
LICOS (steps forward): Philoctetes is not here. I must take the blame for having sent him away.
HERCULES (to LICOS): Where did he go?
CROW (as LICOS): “Phila-TEL-phia!”
LICOS: Towards the gate to the Underworld. With a good horse, it should be easy to overtake him.
HERCULES (to LICOS): I will find him!
(HERCULES takes a few steps, then stops and looks at LICOS.)
JONAH (as HERCULES): “Wait…WHO am I going to find again…?”

(A horse-drawn carriage races through a beautiful tree-lined meadow.)
JONAH: “The Virginia Tourism Board welcomes you. We’ll do ANYTHING to get you here. Seriously. Anything. PLEASE come.”

(HERCULES just kinda lightly slaps one of the Hydra heads with his sword.)
CROW (as film director): “Okay, Mickey, let’s try this again. As you know, we’ve only got one Hydra, so please don’t damage it. Remember, we’re doing pick-up shots with the extra tomorrow. If you must stab it, only use the marked plunge points, and the rest of the time, only light taps, please, with the flat side of the sword like we discussed. Thank you!”
(HERCULES keeps lightly tapping the dragon.)
JONAH: I feel like I’m watching teenage vandals trying to destroy the JURASSIC PARK ride at Universal Studios.

(A SASQUATCH, for some reason, tries to attack DEIANIRA.)
JONAH: I must have fallen asleep in Greek Mythology the day they talked about Sasquatch.