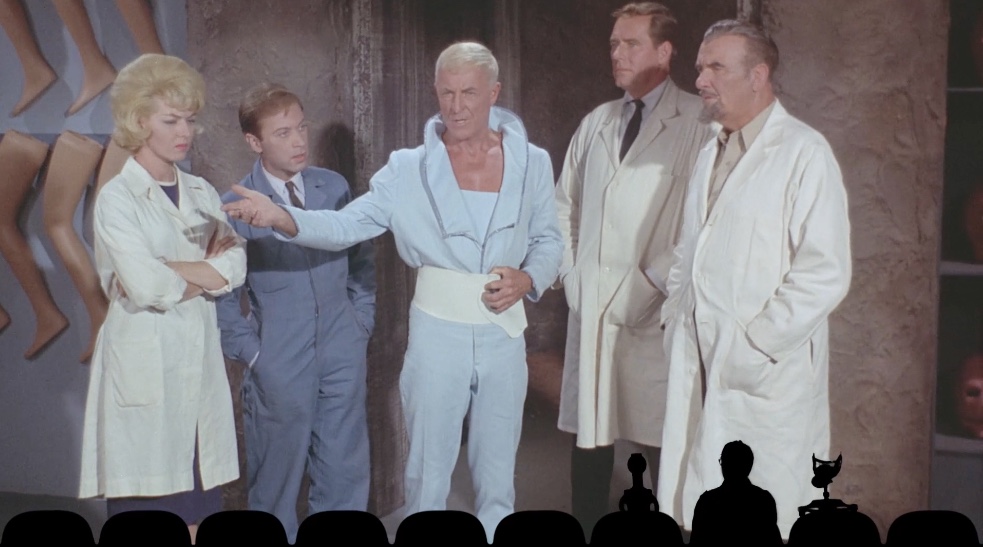 Ever wanted to go forward in time to an era where mankind has survived the apocalypse and progressed to living in a swag cave with a bunch of nightmarish android slaves, a spa full of naked women and “love machines”? Then The Time Travelers is the flick for you! The movie stars a slew of veteran B-level actors: Preston Foster! Philip Carey! Steve Franken! Merry Anders (AND A HAPPY NEW YEAR!)! John Hoyt! And features cinematography by (of all people) Vilmos Zsigmond who would go on to win an Oscar for his camerawork on Spielberg’s Close Encounters of the Third Kind. So just what the hell happened?! Ib “Reptillicus” Melchior happened. Sure, he only wrote the screenplay for “Reptillicus” and he seems to be a slightly better director than the guy who did that film but he still takes some blame for a film that really isn’t so terrible if it just had more money and thought. It’s just really hokey (in a good way) with long, long, LONG sequences where androids are disassembled and reassembled and cave women play groovy future space pianos (between nude tanning sessions and mutant attacks) but the design and tone of the film is inspired at times and recalls former MST3K experiments like “This Island Earth”. 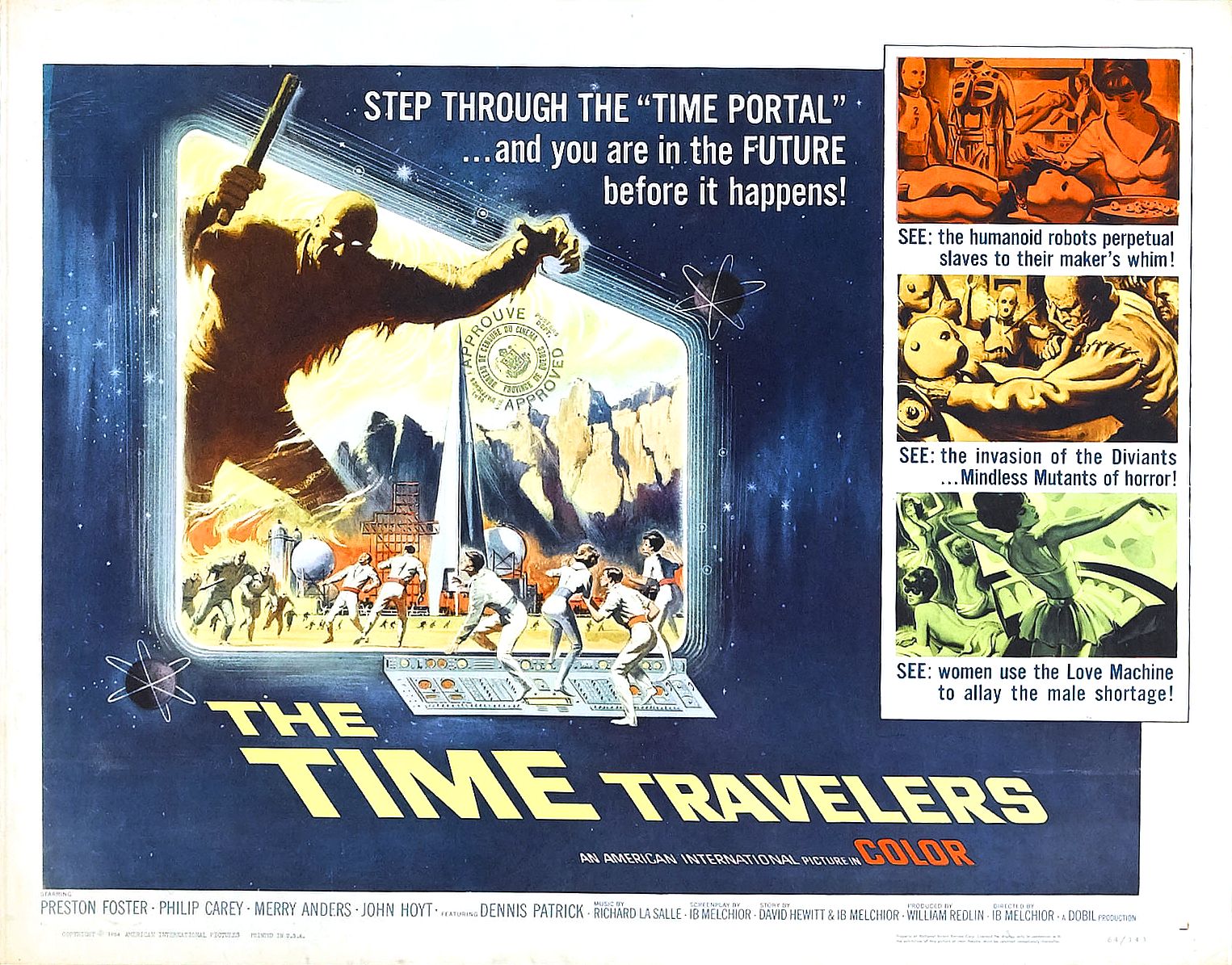 Unfortunately, the halfway compelling nature of the movie serves as a bit of a hindrance to Jonah and the ‘Bots and their riffing. That’s not to say the jokes don’t land or that the episode isn’t funny. It’s fairly solid humor from end to end. The boys get some great belly laughs at the expense of “Danny” (Franken), the dorky lab assistant — but nearly everything else in between induces chuckles at best before recovering near the end to deliver some great lines before the credits roll. Perhaps I’m spoiled but this doesn’t come close to matching the laughing-so-hard-you’re-out-of-breath riffing heard in “Cry Wilderness”. MST3K doesn’t have to be that funny each time, mind you, but I think the RiffTrax rule applies: when a film like this has some quality to it, the riffing has to be spot-on to top it.

That said, here were this episode’s gems:

(Danny looks at view screen, dumbfounded)
SERVO (as one of the scientists): “Can somebody get Danny a ‘Highlights’ magazine or a bag of chips to occupy him while we do grown-up stuff?!”

(Mutants rush at Carol who is waiting inside the campus office.)
JONAH (as Carol): “What I wouldn’t give to have a ‘Danny’ to throw at them right now…”

(The scientists are escorted from one room of a cave to the next room.)
CROW (as Danny): “Oh, great! More cave! You couldn’t have transported us to a Chili’s or something?!”

(Servo sings the Super Mario Bros. “cave song” as the scientists look around the cave.)

(Danny walks around the android shop, being goofy)
JONAH: “He’s traveled a hundred THOUSAND years into the future just so he can hang out in a different lab?!”

(Dr. Varno shows Erik the Cosmic Camera which looks like a flat glass sculpture.)
SERVO (as Dr. Varno): “We won this for selling the most Chryslers.”
JONAH (as Erik): “General Zod still trapped in there? Great!I”

(Danny’s date plays a weird melody on a rainbow keyboard by moving her hands over it as Danny looks on.)
JONAH: “Of all the music that could have survived doomsday, only Esquivel made it?!”
CROW: “Give her credit! She’s working at least as hard as Skrillex does at his shows!”

(The scientists stand around in their future jumpsuits.)
JONAH: “Ladies and Gentlemen…THE BLAND-TASTIC 4!!!”

(A “producer acknowledgement” credit shows on the screen.)
JONAH: “The producers would like to acknowledge that this movie wasn’t very good.” 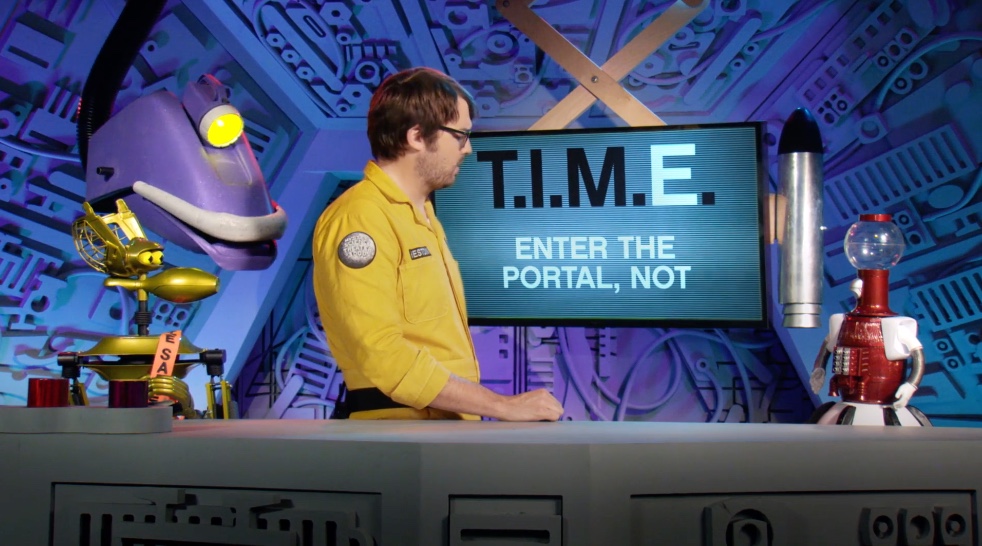 The host sequences are the usual fare but suffer, at times, from being too long-winded (Gypsy and Crow give a safety meeting on how to handle rogue time portals around the SOL) or mean-spirited (Jonah invents three new robots to help out around the SOL — only to have Servo and Crow destroy them with baseball bats and then pester Jonah after they’ve done their damage). The stand-out comes when “Dr. Varno” and “Larry” (the latter is a cameo by the God of MST3K himself, Joel Hodgson) visit the SOL to invite the boys to come with them on a journey to “party”…you know, so long as Jonah and his crew aren’t related to law enforcement. The part of the sketch where Varno explains that they’ve been thrown out of “every club in the galaxy”, resorting to genetically engineering and growing oranges “with the Vodka already in them” is absolutely priceless and had me rolling.

One of the most encouraging things is the improvement in the Kinga/Max segments, as short as they were. The banter between the two has always been good but Kinga seems to have finally found her edge, delivering two of the funniest lines of the host sequences:

MAX: “I prefer to be called ‘TV’s Son of TV’s Frank’…”
KINGA: “The only preferences of yours I care about are the ones I sold to Google for data-mining!”

KINGA: Well, Max…that was the 200th episode of Mystery Science Theater 3000! What an achievement!
MAX: If you count the old series which we had nothing to do with! Technically, this was our third episode…
KINGA: Ok, come on! Disney celebrates fake anniversaries all the time! “Donald Duck turns 90”, “Mickey and Minnie’s 25th Anniversary”, uh…”The 40th Anniversary of Pulling ‘Song of the South’ Off the Shelves”, I DON’T KNOW!

It recalls many a moment when her grandfather would get flabbergasted with Frank or with any given situation where an experiment doesn’t work or Joel frustrated him and I REALLY hope to see more of this. The only downside is that there are only so many times one can repeat the same “I’m TV’s Son of TV’s Frank” joke as a catalyst for a punchline. And despite the improvement, the Invention Exchanges are still weak. Crow and Servo have invented a snack food out of the little “dry packets” that come with jerky and stereo equipment that are (mostly) edible while Kinga and Max have invented “Afterlife Alert” (set off by the same “Bigfoot Medallion” worn by Peter in “Cry Wilderness”) a service that helps damned souls in Purgatory get to the right level. The problem is that these are clever ideas that never seem fully-formed, thus the jokes are one-note and aren’t really funny. 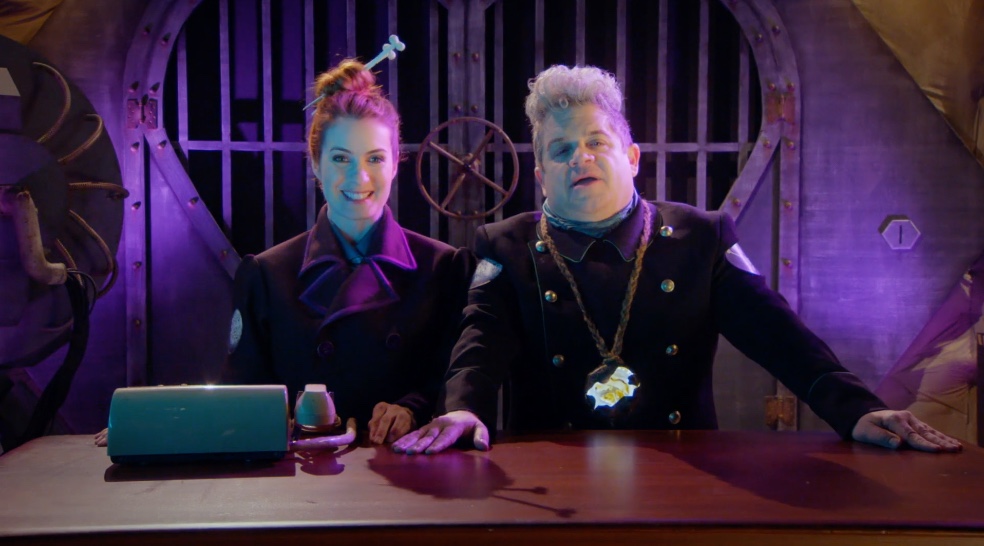 With solid riffing and decent host sketches, “The Time Travelers” is technically another “win” for the new MST3K series but it’s also the weakest offering of the series’ run so far. But whatever you do, don’t over-analyze what I just said. If this is the “weakest” episode the new series has to offer, the rest of the series is going to be a breeze to get through. The entire crew has a chemistry you don’t find in most shows and most of the writing is sharper than a lot of what you see on network television. “Travelers” is like any other average episode of MST3K: amusing, fun and watchable — but only to be repeated if one is a fan or a completionist.