‘No Escape’ review: Escape from the theater 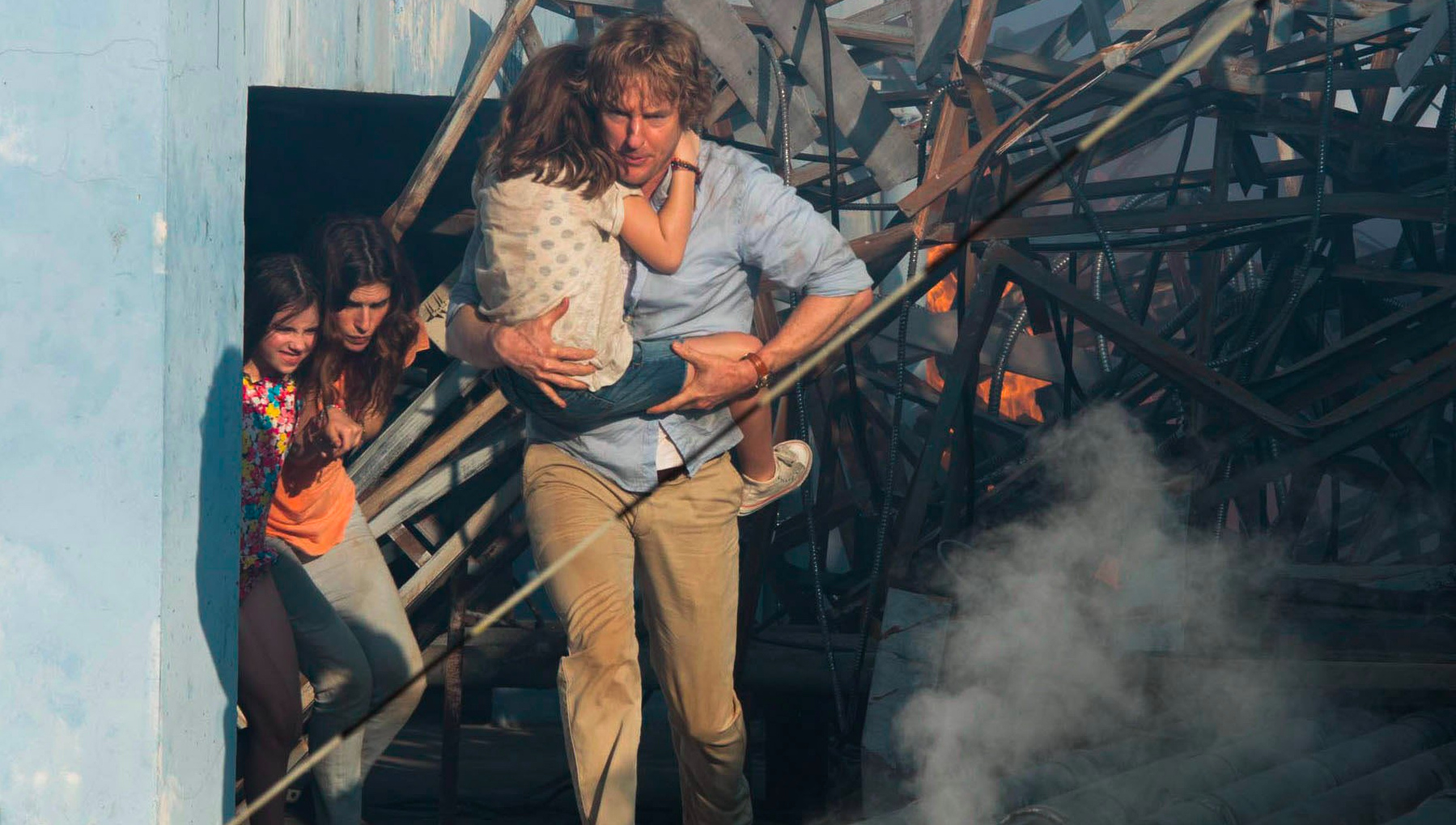 “No Escape” features a family attempting to get out of an unnamed “Southeast Asian” country after bloodthirsty dissidents take over the entire region in the time it takes to get a haircut. It’s also the type of movie where the safe haven of “Vietnam” is just beyond an old bridge marked with a giant, bright-orange banner that actually reads “VIETNAM” in big letters because, holy shit, that’s how much respect the filmmakers have for their audience.

Owen Wilson stars as “Jack Dwyer”, a businessman with affiliation to a company that has apparently discovered some of the area’s resources and plopped a big ol’ factory down like Sim City in order to mine it. ‘Murica’s meddlin’ pisses off the good citizens of Where Ever The Hell This Is, so they all don red scarves, brandish guns, swords and other assorted weapons and go on a bloodthirsty rampage, murdering anything that gets in their way.

After witnessing other white people getting a bullet to the head, Dwyer scoops up his wife Annie (Lake Bell) and his two kids, Lucy (Sterling Jerins) and “The Beez” (Claire Geare), and, together, they escape to the roof of their hotel. After nearly dying several times over at the hands of a rebel-hijacked gunship, the family ends up uniting with a mysterious man named “Hammond” (Pierce Brosnan) and his partner, “Kenny Rogers” (Sahajak Boonthanakit), the Dwyers are told to escape to “Vietnam” where (in a twist the filmmakers seem to think is deeply ironic) they can find asylum. The film is wildly uneven.

First, It’s honest-to-Flying-Spaghetti-Monster weird that this is a movie set in a part of the world with so much culture and so many good people, yet the only people we’re programmed to care about is a bunch of white people. Seriously. Everyone “civilized” is a bunch of white people who just cannot believe what’s happening. On top of that, the Dwyers and the situation that causes the country’s “uprising” are completely underdeveloped. Why are the Dwyers there? For Dad’s company thing. What’s the company thing? Something about water and putting in a factory that takes water. On top of that, every single Asian person who isn’t one of the rebels in this film is simply window dressing — and insultingly so. They’re clueless, nameless, and helpless or they’re represented as drug addicts, hookers or living in complete poverty.

Second, while the movie can be very intense and delivers some suspenseful set pieces (that is, if you’re into the kind of “intense suspense” the Brothers Dowdle are selling you), it starts at dumb, then moves on to insulting to offensive to dirty to downright ugly.and there were moments I was tempted to walk out of the theater and not watch another minute. One moment that encompasses all five of those adjectives is a scene where Annie is temporarily captured by a group of rebels. Before I go on, I probably should say that you’ve probably guessed that the movie is basically an ongoing game of cat-and-mouse. Each suspense sequence is predicated on whether or not the rebels will look behind some rubble or underneath some sort of canvassing to find the Dwyers trembling underneath.

When Annie is nabbed, she’s beaten mercilessly — and I mean mercilessly. The leader of the group outright pins her to the ground and punches her in the face until blood is pouring from her mouth. It’s a terrible scene — but the filmmakers aren’t through. Annie is thrown on top of a stone column, a couple rebels holding her there. The leader spreads her legs and begins to unbuckle his pants, intent on raping her in front of her husband. All Jack can do is scream as the rebel leader just smirks at Jack. A belt is unbuckled. We hear a zipper. Moments later, they tear her dress off. The music grows more and more shrill, leading to some sort of crescendo. It’s not suspenseful. It’s sick. The rape scene in The Girl With the Dragon Tattoo works because it ends up advancing the plot. It also sympathizes with the character by showcasing the emotional and physical toll it takes on Lisbeth. Lisbeth is also a very strong female character. In this movie, the near-rape is used as a set-piece. It’s exploitation and cinematic misogyny at its worst, as if the filmmakers are smugly winking at the audience while asking, “Will he REALLY rape Annie? WILL HE???”

I won’t even touch the part where the rebel’s leader gives Beez a gun so that she can shoot her own father. Oh wait, I went there. He also puts a gun to her head and threatens to end her life if she doesn’t follow through on that order. What a movie. The big draw behind this film is Owen Wilson’s “dramatic turn”, which is to say that he’s doing something other than being a comedy character with an easygoing “gee whiz” swagger. Unfortunately, he brings that same swagger into this movie. Nothing changes here other than the fact that he bleeds, occasionally punches a guy and holds a gun. It’s even hard to believe that this is his family. He just seems like he was plucked out of “A Night at the Museum” in order to fill in for Kiefer Sutherland who couldn’t make it because he was busy filming Tequila ads. Brosnan doesn’t belong here, either. His character is more or less a reprisal of the Julian Noble character from 2005’s “The Matador”. He’s a heavy-drinking, chain-smoking, womanizing former government spook working for the UK or Australia. Like every other character or sub-plot in this film, we’re not sure because it isn’t clear and it never becomes clear. He’s presented as the film’s comic relief which is a baffling decision considering what the filmmakers are trying to go for. Plus, it’s obvious the Dwyers need a little help and who better to help them than Dirty Old James Bond? Right?

Other than that, there isn’t much to this movie. Every single sequence is the Dwyers running from the same angry people over and over and hiding behind fences, rocks and bushes. Sometimes, they disguise in plain sight and walk right through a mob of angry rebels who don’t have seem to have the smarts to stop and say, “Hey, you’ve got blonde hair, blue eyes and a couple kids!” Even the cinematography and locales are irritating and disgustingly grimy. Everything is bloody or covered in mud. It’s interspersed with night photography a’la Michael Mann, but completely lacks the style that made Mann’s films unique. It’s obvious that director John Erick Dowdle has some talent, having given us some decent psychological horror in “The Poughkeepsie Tapes” and “As Above, So Below”, and one can see that he’s brought that mindset to this film. The film is almost like a zombie apocalypse film with real people standing in for the zombies. With a better script and fleshed-out characters, that premise might have worked. It wouldn’t have been wholly original (“28 Days Later” kinda tackled that), but it might have worked.

It doesn’t work when you have Annie pointing at Vietnam’s “bridge border” and yelling, “LOOK! THERE’S VIETNAM!”

One of the movie’s taglines is “How far would you go to survive?”

That question should be directed at the audience subjected to this disaster.