‘No Time to Die’ review: A lot of time for a lot of death

If there’s anything I have learned from Daniel Craig’s journey down the 007 rabbit hole, it’s that, unlike the films which preceded it, his outings all feature a gritty realism to them and take themselves almost too seriously. This has either worked (Casino Royale, Skyfall), presented us with some silliness and overwrought nonsense (SPECTRE), or simply caused the franchise to faceplant in the mud (Quantum of Solace).

In No Time to Die (which finally opens theatrically this weekend after being delayed for over a year due to COVID), we find that Bond has done his best to move on and is happily attached to Madeleine Swann (Léa Seydoux), the woman he ran away with at the end of SPECTRE, the previous film. The two are making the best of things in the Italian city of Matera — but what’s the spy life without secrets? Madeline is mentally scarred from her childhood where a mysterious masked man murdered her mother over 20 years ago. This is something she won’t tell Bond because he won’t open up about Vesper — who is conveniently buried “just a few miles” from their residence. After talking about their skeletons, Madeline makes a pact to put her childhood behind her and requests that Bond do the same…all while not telling him about her past. We’re gonna cover this in a few. 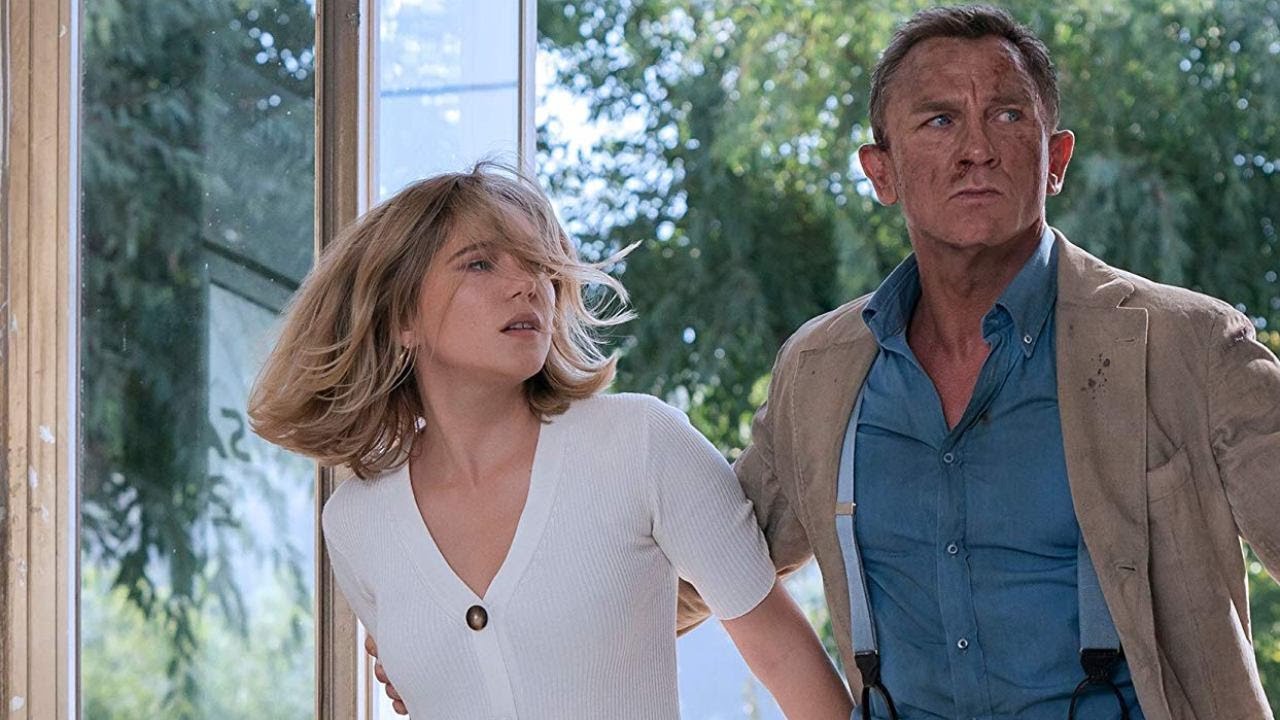 But when Bond makes a visit to Vesper’s grave, he finds a card with SPECTRE’s trademark octopus logo on it — before a bomb detonates inside of her crypt, nearly killing him. But that’s not all: several men with guns, cars, and bikes have shown up to shoot up what’s left of him. After he escapes with his life, he hurries back to Madeline and grills her, convinced that she’s been an agent for SPECTRE all this time and that she set him up for the chop. Picture the opening for The Bourne Supremacy where instead of saving his girlfriend from drowning in a river, an abusive Jason Bourne is seconds away from straight up allowing his girlfriend to die because he can’t trust her and you get the idea. Despite swearing that she isn’t, Bond just dumps her on a train and tells her he will never see her again, which just makes absolutely zero sense, but here we are.

Five years pass, and Bond is in Jamaica, retired from MI6…again. Yes, we did this angle in Skyfall but, this time, Bond isn’t really all that bitter and doesn’t have uranium bullet shards embedded in his shoulder. Despite his best attempts to stay out of the spy game, his old friend Felix Leiter (Jeffrey Wright) comes calling to pull him back in after Russian MI6 agent Valdo Obruchev (David Dencik) is kidnapped from his lab by apparent SPECTRE agents. Why Felix and the CIA are even involved when this a) happened in the UK and b) occurred on MI6 grounds is anyone’s guess but it’s nice to see Wright after a long absence. Obruchev, it turns out, has been working on a weapon called “Heracles” which is basically a virus made up of nanobots which binds to a host and murders whoever the bots are programmed to target via touch. At first, Bond refuses Leiter’s request to find Obruchev — but reluctantly agrees once he meets Nomi (Lashana Lynch), an MI6 agent who has been designated the new 007 in his absence.

When Bond hits a Cuban club full of SPECTRE members, he seemingly falls into a trap when Blofeld, the still-imprisoned leader of SPECTRE (Christoph Waltz), orders his members to release Heracles so that Bond can finally die. Instead, the virus does the opposite, killing every member of SPECTRE instead, and sparing Bond and his cohorts…but why? It turns out that Obruchev works for the aforementioned masked man, dubbed “Lyutsifer Safin” (Rami Malek), a name that looks like somebody forgot to run the spell-check function in Microsoft Word, yet everyone pronounces his first name as “Lucifer” anyhow. In any case, Safin lost his mind years ago when SPECTRE agents murdered his family, so the mass murder of SPECTRE was his idea of revenge. “It used to be easier to separate the good guys from the bad guys,” Felix tells Bond, apropos of today’s world. And Safin isn’t done: his next target is Blofeld, himself.

One of the biggest issues I have with “No Time to Die” is that it tries hard to convince you that what’s happening on screen is more important than it actually is.

The script is written by Bond veterans Neal Purvis and Robert Wade, with some help from director Cary Joji Fukunaga (the guy behind HBO’s True Detective) and an assist by Phoebe Waller-Bridge, the latter of whom was brought in to make Bond more appealing to its female audience. Instead, we end up with a discombobulated mess where Blofeld, the Big Bad responsible for everything that’s ever gone wrong in Bond’s life, from Vesper’s death to the murder of Le Chiffre (Mads Mikkelsen from Casino Royale) to M’s assassination at the hands Silva (Javier Bardem from Skyfall), is rendered irrelevant by Safin, which is not the smartest move, considering that Bond and Blofeld have a history as direct rivals and the fact that this movie is the last Bond film for Craig and SHOULD involve Blofeld.

I feel bad for Waltz. He’s a polished actor. He was the best part of SPECTRE — and he’s relegated to one whole scene where he’s handcuffed in a chair, playing headgames with Bond like Hannibal Lecter with Clarice Starling in The Silence of the Lambs before the movie decides to take a sharp left turn, says “the hell with this”, and makes Safin the star villain. Don’t get me wrong: Rami Malek is a FANTASTIC actor. I adored him in USA’s highly underrated Mr. Robot. He was far better there than in Bohemian Rhapsody, for which he won the Oscar. Here, Malek is wooden, mumbling his lines, ASMR-style, about plants and revenge and dead parents while walking around in a goofy suit/gown thing like he’s a 1950’s sci-fi villain. He has little to no motivation past “KILL SPECTRE AND BLOFELD” — yet, the film would have you believe he’s now graduated to also wiping out millions of random people so he can rule the world. He’s not interesting in the slightest and I really wished there was a way that the writers could have found a way to have he and Blofeld work together instead of just writing Blofeld off entirely.

Another annoyance is Bond’s replacement, Nomi. And before you all send a barrage of hate mail at me, I am all for having Lynch as a 007 — except the movie doesn’t even treat her like one. The writers give Nomi next to NOTHING to do besides giving Bond car and plane rides when he needs them, tagging along on his final mission, wearing cool Le Specs sunglasses in almost every shot, inexplicably coughing up the “007” moniker before the final mission, and saying things like (I wish I didn’t have to type this) “Do you know what time it is? It’s time to DIE!” Ugh. And then the film upstages Lynch altogether by introducing CIA Agent Paloma (Ana de Armas from Knives Out, a movie she co-starred with Daniel Craig), a nervous, neurotic, young Cuban agent who kicks ass and takes names when the heat is on. She and Craig have more chemistry in ten minutes than he and Nomi do the entire film. 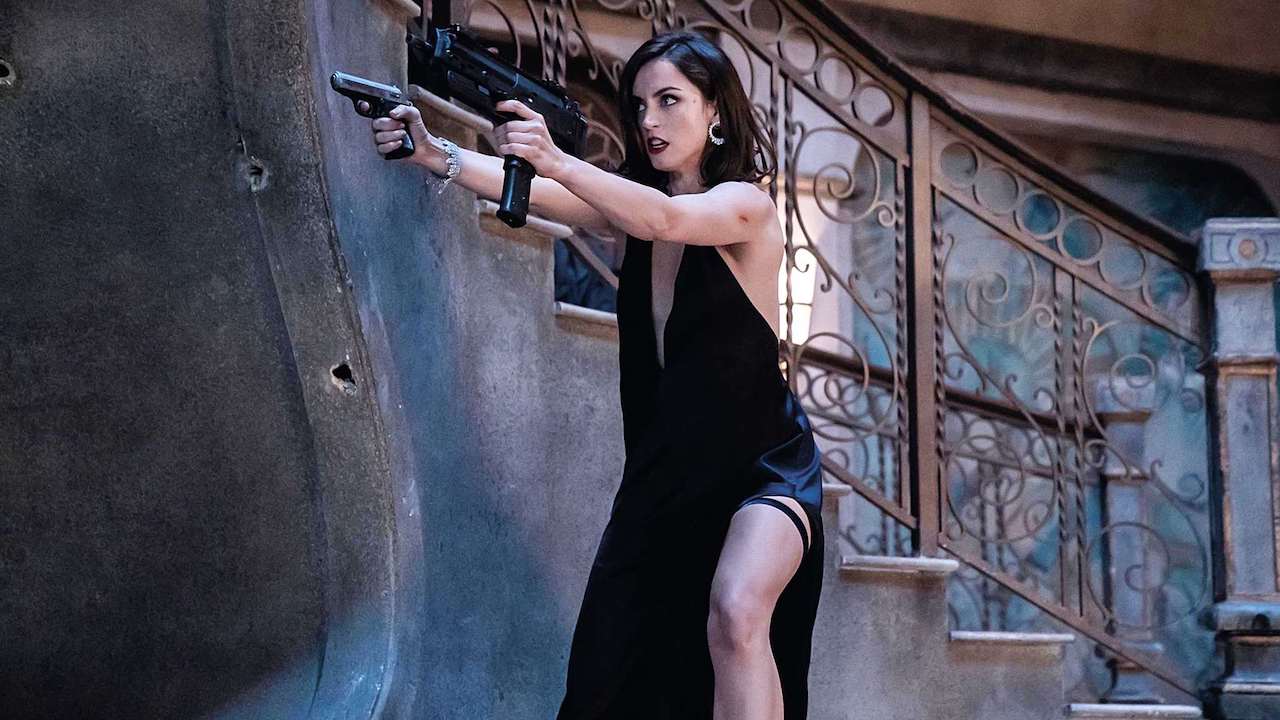 It also doesn’t help that Madeleine is such a milquetoast love interest for Bond. I didn’t believe they loved one another in SPECTRE and I still don’t believe it here. The writers portray Madeleine as a bitter, jilted woman semi-jealous over a woman who’s been dead for a decade — but has no issues dropping five years of pent-up animosity because James is back and he’s sorry and, by the way, there’s also a kid that may or may not be his.

Shit, I forgot about the kid.

That’s another thing this movie stuffs into its already-bloated, near-three hour runtime (of which you feel every single minute — especially when it drags through the mopey stuff).

In his absence, Madeleine gave birth to Mathilda (Lisa Dorah-Sonnet), a daughter Madeleine coldly tells James isn’t his. And because nobody can actually buy that Madeleine and James are such star-crossed lovers, Mathilda is shamelessly used as a cheap child endangerment plot device, a move as coldly calculated as it is needlessly cynical and inappropriate.

One more thing happens in this film that I won’t mention. I’m pretty sure you already know what it is — and it doesn’t work a) because of the lack of chemistry or passion between Craig and Seydoux b) Craig wings it the entire film and looks tired c) the aftermath is dealt with in about three short minutes (where M reads a few words and then has his 73rd whiskey of the picture) and d) it’s all going to be irrelevant anyhow when the producers figure out that they cannot simply go a different direction.

It’s also a mind-numbingly incompetent thing to do when the character is about to turn 60 years old.

THAT’S how you celebrate a 60-year milestone? A depressing, unnecessary Avengers: Endgame-like ending while closing out the film with Louis Armstrong’s “We Have All the Time in the World” from On Her Majesty’s Secret Service? I can almost see the smug, self-congratulatory smirk on the faces of the writers and producers. 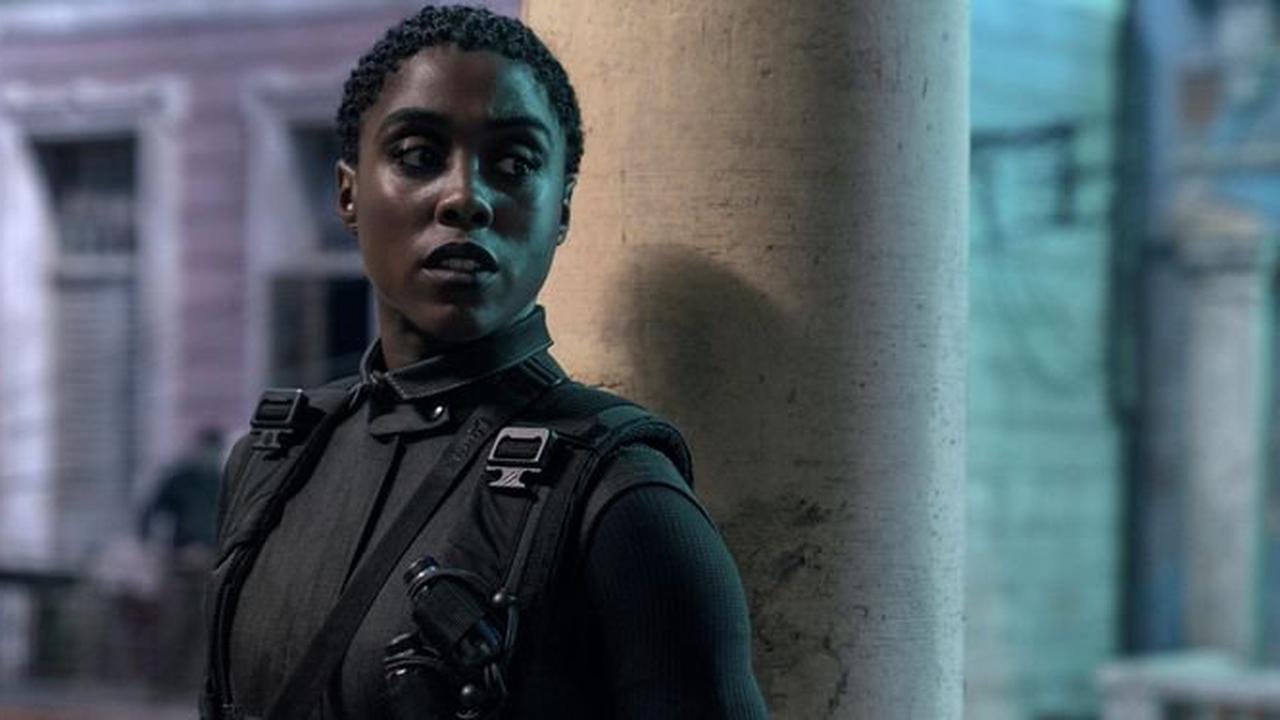 It’s a shame things had to end this way because the movie has such promise. The opening scene, more indicative of a horror film or true crime suspense drama, involving Safin and young Madeline, is extremely well-executed and frightening. The classic Bond musical score via veteran composer Hans Zimmer is also especially great. The cinematography is top notch, giving us a look at areas around the globe that we don’t normally see. The sets are beautiful, especially Safin’s “island lair” which recalls the old Bond sets constructed by the great Ken Adams.

As I mentioned, the James Bond film franchise turns 60 next year. In that time, we’ve seen six actors play Bond in 25 films (27, if you count the unofficial Bond films: the ’67 version of Casino Royale as well as 83’s Never Say Never Again). While the first 20 films didn’t have much in the way of continuity (For Your Eyes Only remains one of the only films to ever mention James’ marriage to Tracy from the film On Her Majesty’s Secret Service), Craig’s films created a small, yet mature, universe.

In five films, we’ve seen Bond endure personal tragedy a few times over. It’s what hones his character and makes him sharp. The notion that Bond isn’t destined to be happy or that his adventures should be without a sliver of a sense of humor isn’t exactly what kills No Time to Die, but rather the frustratingly incompetent execution of it.