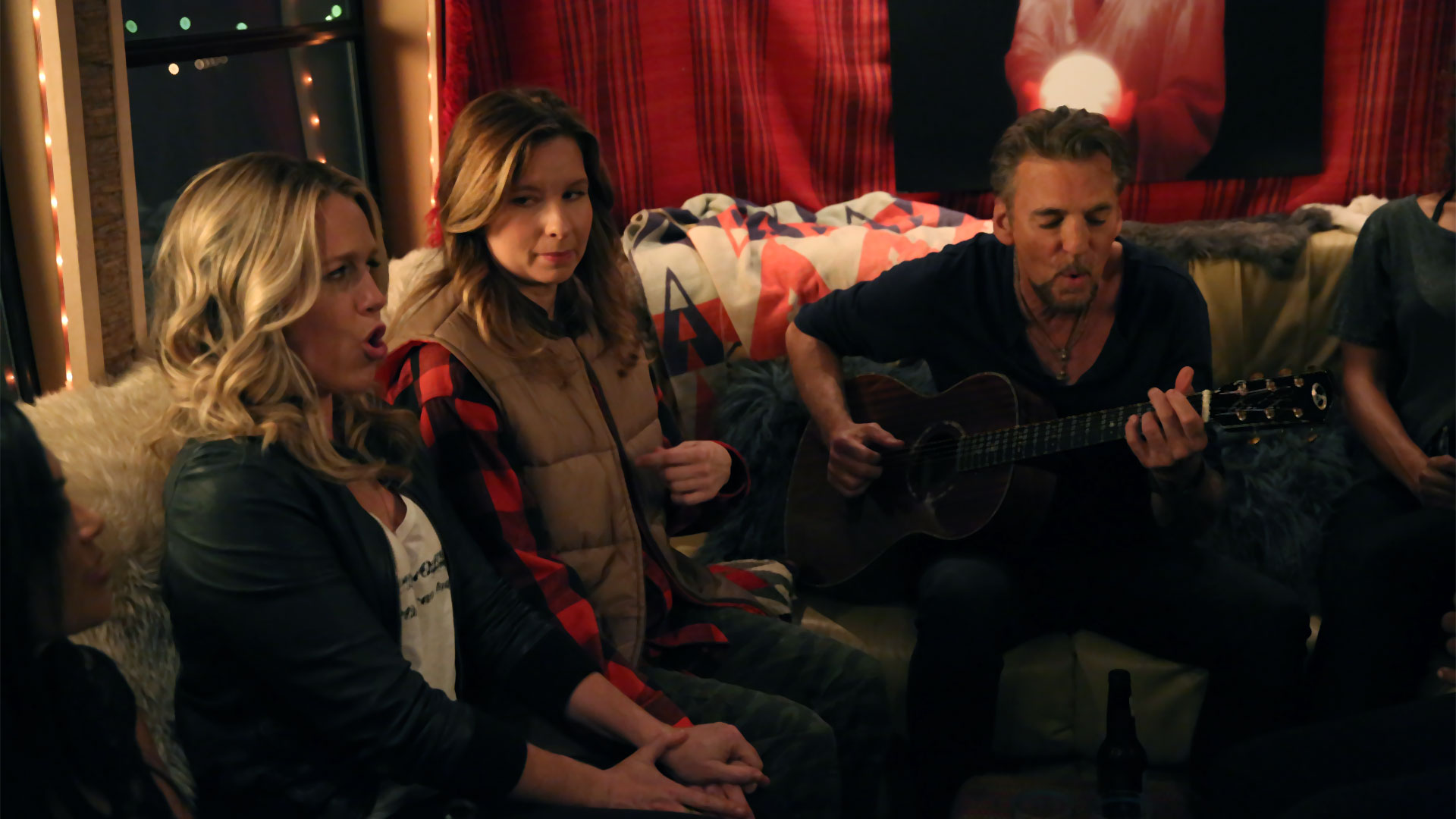 Having already tackled the Emma/Mark/Rabbi Dan love triangle in “Officer of the Year” and putting us through the emotional wringer, Playing House rewards us with one of the best episodes of the series’ run thus far. It’s been a year since we were first introduced to the wacky duo of Emma and Maggie as they sang their way down downtown Pinebrook, blasting Kenny Loggins’ “Celebrate Me Home” and singing along at the top of their lungs while Emma “used Maggie’s boob as a microphone” to really hit those high notes. And why the hell not? “Kenny Loggins is the soundtrack of our lives,” Emma says to Maggie after taking a jog down memory lane courtesy of Zach who found old home video footage of Emma and Maggie grooving to Loggins’ “Footloose” in their front yard.

When we last left Emma and Maggie, Emma was reeling from her break-up with Rabbi Dan and, simultaneously, getting shot down by Mark. What could be worse than Mark not returning her phone calls and breaking a nice guy’s heart? “I saw Rabbi Dan at the gym,” Zach tells Emma after she surmises that Rabbi Dan is probably crying himself to sleep each night.  “He seems to be doing fine.” All Emma can do is sigh — until Maggie and Zach drop a bombshell on Emma to cheer her up: Kenny Loggins is coming into town — and they’ve got tickets to go. Maggie’s excitement might be a little greater than her best friend’s: she told Loggins about how special Emma is to her and Loggins was so touched, he’s going to dedicate a song to Emma. Of course, it’s not so simple: Zach doesn’t actually have tickets because Loggins “appeared shirtless on Kathy Lee & Hoda” and the tickets sold out in under an hour. “I know the man is in the autumn of his life,” Zach tells his sister. “but when that linen came off, it sure felt like summer.” Even Zach’s attempt at obtaining tickets, via a scalper (Stephnie Weir), doesn’t work. “If you can’t trust a scalper named ‘Jeanine Willcall’, who can you trust?” Zach ponders after “Jeanine” makes off with a bunch of their cash and leaves them coupons for Chuck E. Cheese in exchange. So, it’s up to the trio to get themselves in because Maggie’s pissed — and she’s not listening to Kenny from the parking lot. Emma begs Maggie not to do anything rash…but it’s far too late: Ol’ Bosephus is back again — much to Emma’s dismay — and he’s got a plan to get everyone in as roadies doing some heavy-lifting.

While Zach bonds and flirts with the band’s guitarist (Pamela Adlon of Showtime’s Californication) over their mutual love of playing music and their band war stories, Emma and Maggie find themselves bringing one of Kenny Loggins’ favorite snacks (“Ants on a Loggins” — I kid you not) to his dressing room in one of the funniest moments the show has to offer. Aside from the entire room being adorned in sheepskin, nearly everything is either named for one of Kenny’s songs or is a play on his name. The door to his dressing room? “This Is It”. The food? “I’m All Rice”, “Caddy Snacks”, “Foot Juice” and, of course, “Celebrate Me Scones”. The bathroom? Why, “Pooh Corner”, of course. But all their schoolgirl fan worship takes a backseat when they actually come face-to-face with Loggins, himself, whose initial reaction is to toss them out of his green room after Maggie reveals that she’s not actually a man. All’s well that ends well, however: Mark (who has been under deep cover trying to bust Jeanine Willcall’s “scalper ring”) frees the ladies from the arena holding cell — and they end up on Loggins’ tour bus post-concert. Zach, it seems, has an in with Loggins through Pam and he’s cleared up the whole misunderstanding.

In a wonderful exchange, Loggins reveals that he was incredibly touched by Maggie’s letter and that, since they missed the concert and couldn’t hear him sing, he owes them a song. The sing-along to Loggin’s acoustic version of “Celebrate Me Home” couldn’t be a better or more fitting climax to this episode or, if the series doesn’t see a third year, to the series, itself. 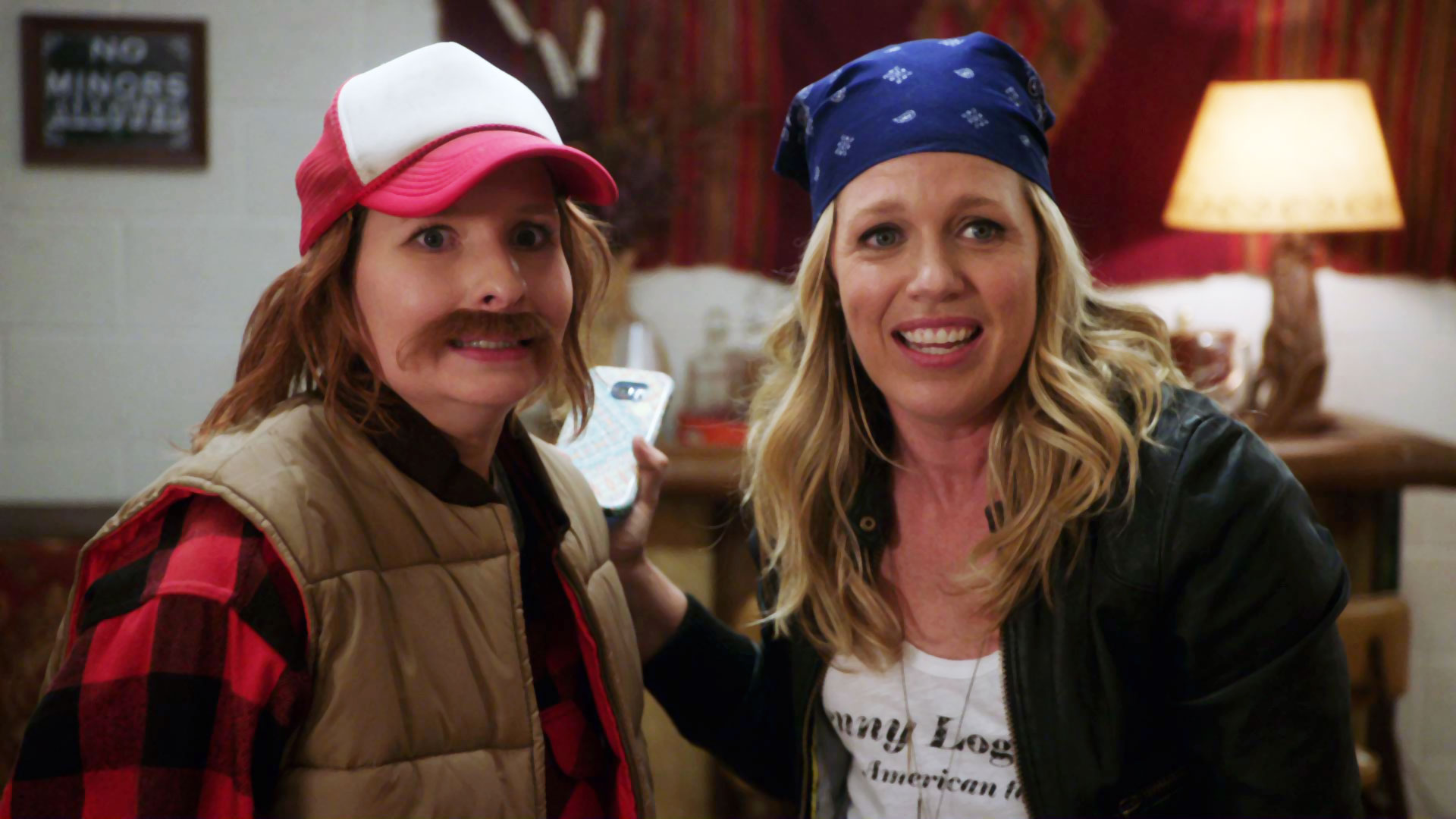 With “Celebrate Me Scones”, USA’s Playing House comes full circle. There are some flaws (notably, the fact that everything with Mark remains frustratingly unresolved and all we get is a tiny little hint near the end that they finally may work things out) but, when the main story and overall theme is this good, it’s hard to complain. The friendship between Maggie and Emma has always been the backbone of the show and the clever plotline which brings the seemingly-immortal Kenny Loggins into the picture is executed with such wit, humor and charm, that one cannot possibly dislike anything they’ll see here.