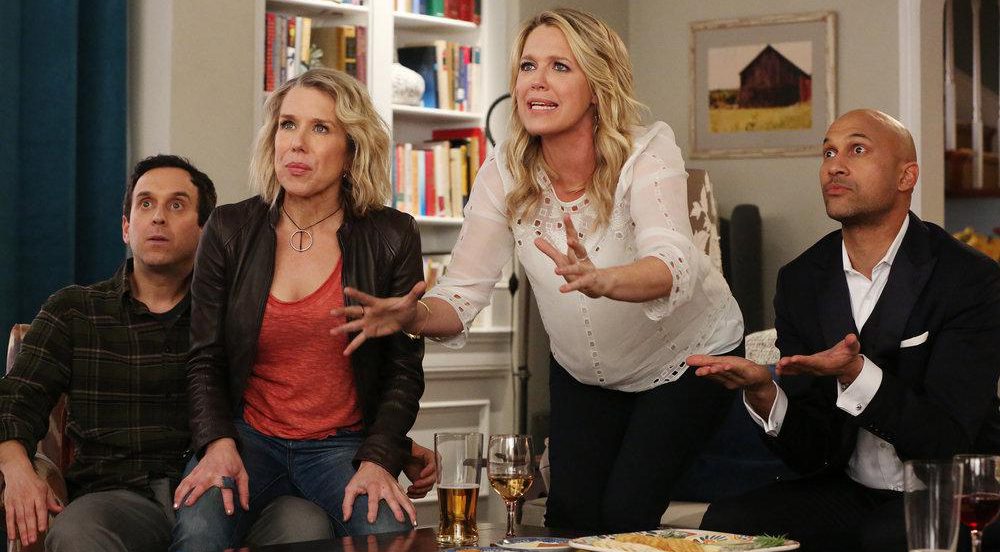 How does the third season of the story of the ins and outs of the bond between two of the greatest female friends since Lucy and Ethel begin?

With Maggie beating the holy crap out of her best friend, Emma, of course.

After nearly a two-year wait, USA’s “Playing House” returns to the airwaves with “Cookie Jar” which finds the main characters of Pinebrook…well, mostly happy. Emma (Jessica St. Clair) is now dating Mark (Keegan Michael-Key) who hands out parking tickets to Emma for “being too sexy. Maggie’s ex-husband, Bruce (Brad Morris), has seemingly moved on past the one-nighter he had with his ex-wife and is dating “Cookie” (guest star Lauren Weedman), Pinebrook’s self-defense authority, “former MMA fighter” (as Emma duly points out to Mark who has snuck into Maggie’s house) and trainer to Emma and Maggie.

But what about Maggie?

What about Maggie, indeed.

When she isn’t tending to Baby Charlotte or cooking Pigs in a Blanket for a “dinner-and-apps” party for Bruce and Cookie or giving sex (and penis) tips to Emma with regard to Mark, Maggie’s stuck being a mother, stewing over Emma’s luck in having a second chance with Mark and watching Cookie violently mount Bruce on her sofa, not unlike Ric Flair wrapping an opponent in a Figure Four, something Emma calls, “Two hippos wrasslin’ in the wild.” 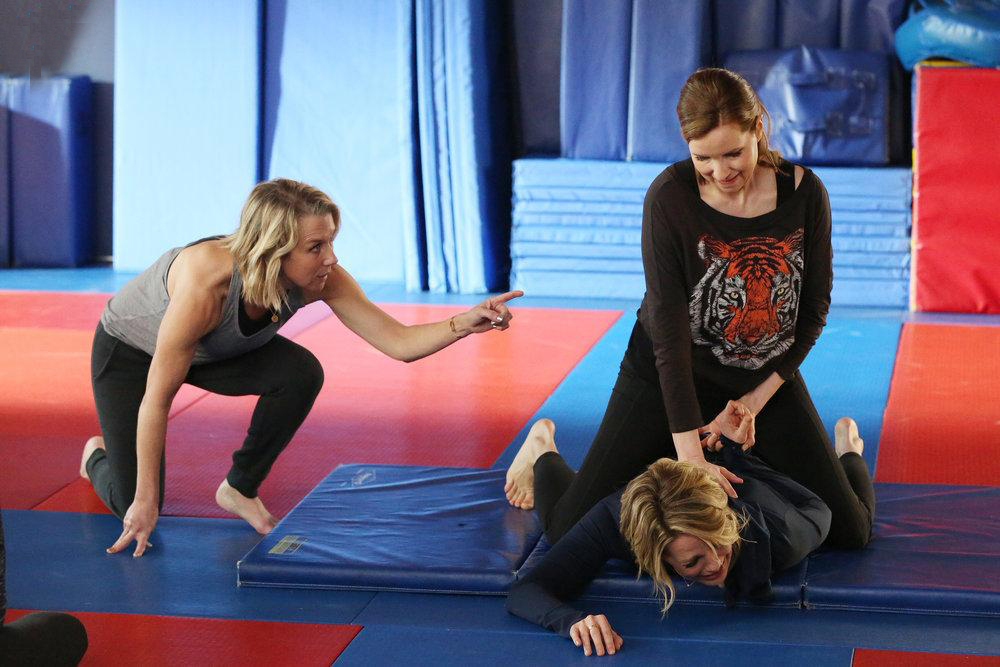 The entire situation comes to a head when Maggie introduces games into the party, only to unwittingly fall into a trap of her own design: playing a filmic variation of the game “Heads Up” — only the players are paired off as couples. Whereas Bruce and Cookie are predictably competitive and Emma and Mark are cute and playful (Mark screaming “IT WAS JURASSIC PARK” at a Mariah Carey-esque decibel-level, when Emma won’t say the answer of a film on purpose, is beyond hilarious), Maggie’s just Maggie.

While she may be part of Cookie’s inner circle (dubbed “The Cookie Jar” by Cookie, hersefl), ironically, it’s a superficial title and doesn’t have any meaning beyond being the member of a club that won’t impact her in any special way. Despite Emma’s sisterly friendship and the love she has for Charlotte, Maggie is truly “alone” — a point accidentally driven home in a darkly humorous scene where Mark, Bruce, Cookie and Emma shout “YOU’RE ALL ALONE!”, “NOBODY IS WITH YOU!” and “YOU’RE BY YOURSELF!”, causing Maggie to snap and break down crying…if only Maggie realized the movie title she had to guess was “Home Alone”. Har-har.

If “Cookie Jar” is the rain on Maggie’s umbrella, then “None of Your Business” is the ray of sunshine that follows it. 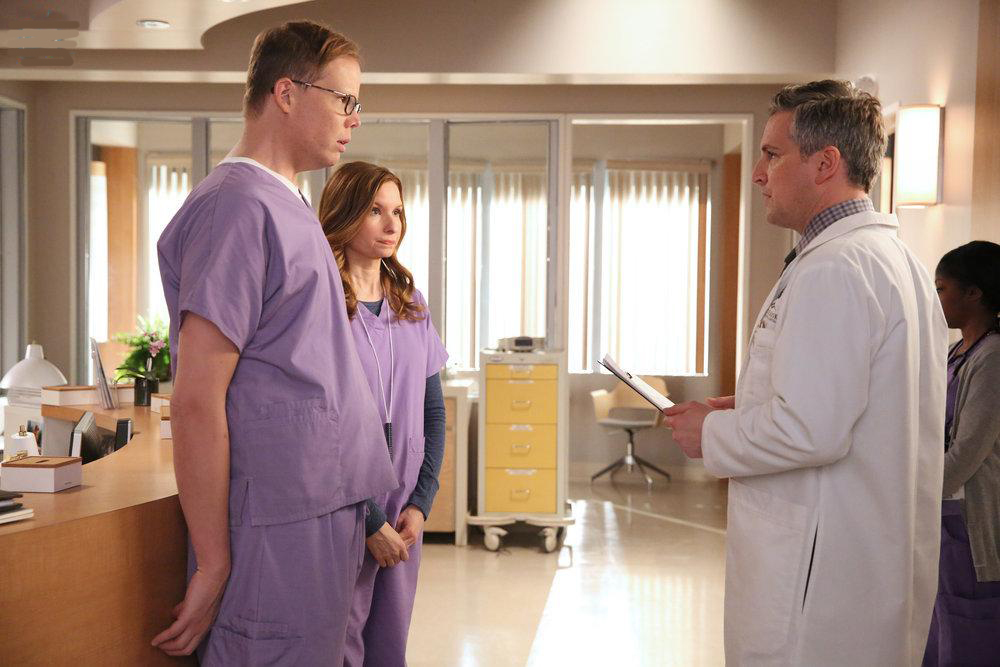 Enter the good Dr. Ericson (guest star Ben Willbond), your prototypically droll Brit who comfortably rules the wing of the hospital Maggie now works in. While the episode is bright, cherry and sun-lit, Dr. Ericson is stiff, grey and is attached only to his clipboard. He’s all business, glaring at Maggie and her colleague, Nurse Jeff (guest star Jeff Hiller), as they goof around with patient pudding and saying “That’s what she said” after unintended double entendres uttered by Ericson.

On the flip side, Emma is panicked, having yet to deal with “Bird Bones” AKA Tina, Mark’s ex-wife (Lindsay Sloane) and the revelation that she and Mark are an item — only to discover that Tina not only knows, she’s also cool with it. Sorta. She’s nervous — though Tina’s always nervous. This prompts Emma to investigate the situation, only to find out that the only reason Tina is quaking in her boots is because she’s unwittingly entered a pyramid scheme: she needs to sell hundreds of units of make-up to the women of Pinewood by next week or else, she’s toast.

Whatever is Tina to do? 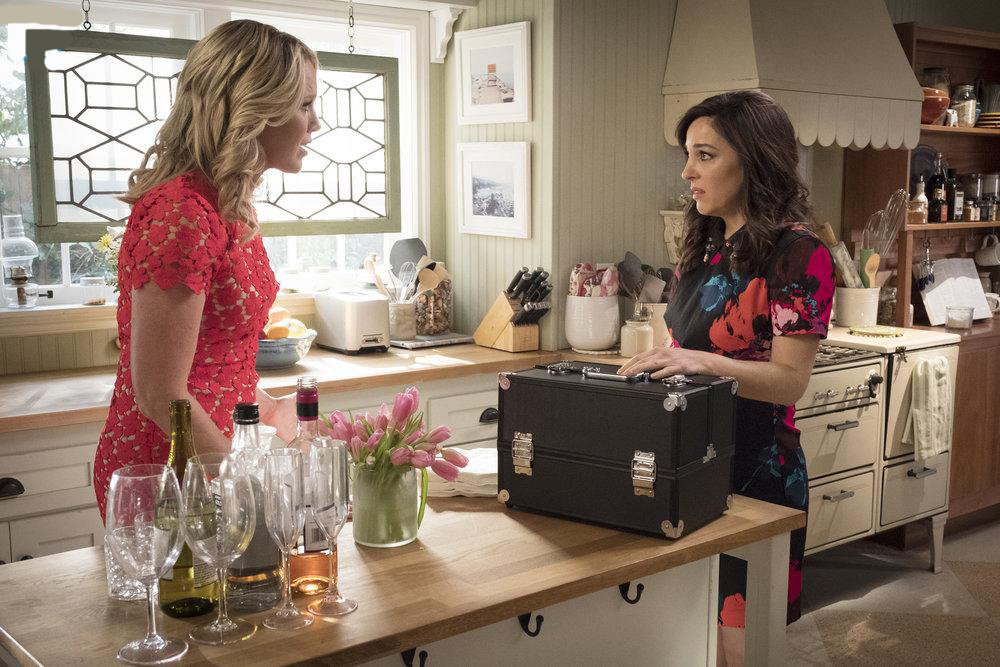 Leave it to Emma.

As we already know, Emma was businesswoman before settling in with Maggie in Pinewood and she can sell anything. Plus, she feels she owes Tina being that she’s dating her husband and all. She opts to not only help Tina sell every unit she purchased but buys another round to help Tina recoup her losses. Of course, it will involve moving past Tina’s initial plan of going “door to door” and might even involve the help of Maggie…who turns out to be allergic to the make-up Tina and Emma possess.

The beauty of this episode is that Maggie’s gain is a bi-product of Emma’s ill-conceived schemes for once: her plight gains sympathy from the aforementioned Dr. Ericson who not only reveals that he doesn’t exactly have a stick up his ass but that he’s also got a sense of humor. It’s satisfying to see Maggie beam after being put into a hole by her own friends.

But the overall brilliance of all this is the running theme of sisterhood: Tina and Emma should be on opposite sides, hurling mental grenades at one another. Instead, they’ve patched up their differences and come together as one. Emma not only helps Tina overcome her insecurities of being dumped by Mark but gains confidence in herself by trusting in Emma’s skills as a saleswoman, a job which requires a modicum of confidence and more than a little charm.

It’s a joy to see “Playing House” back on the airwaves. I’ve missed the show immensely. The third season is off to a nice start — though a bit on the safe side, if you will. The clever dialogue is still there but some of this is rooted in Hallmark Channel territory where everything is perfect and nothing can possibly go wrong. Maybe that’s just what this show is or, maybe, that’s a result of the small-town setting where the show is set. Either way, “Playing House” remains extremely entertaining and funny due to hair-trigger comedic timing and the undeniable chemistry between the two actresses and the supporting cast.