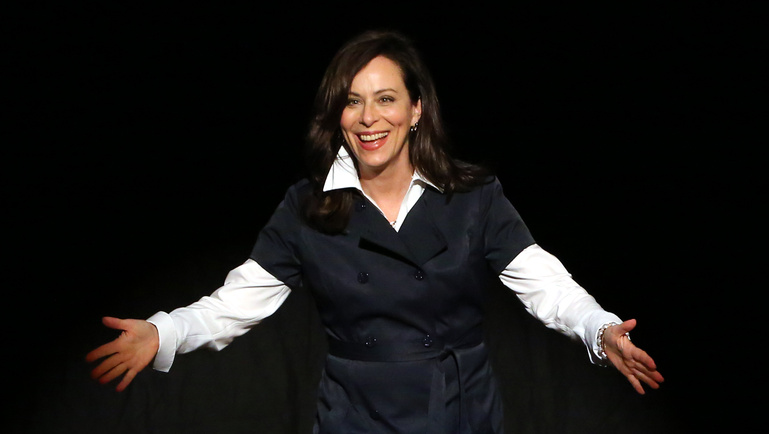 In last season’s episode, “Unfinished Business”, we learned that Emma and her mother, Gwen (Jane Kaczmarek), have a very precarious relationship. They don’t see eye-to-eye and Emma has chosen to keep away from her Mom as a result. Instead of choosing therapy to work through the long-standing issues with her daughter, Gwen writes aggressive Slam Poetry — under the pseudonym, Phylicia Rashad. Yes, that Phylicia Rashad. Anyone can relate with both these women. Her mother feels unappreciated for past deeds done in the name of her kid and Emma feels like her Mom’s self-crucifixion is complete melodrama on the way to a nice, painful guilt trip.

And in the middle of it all is Maggie who plays peacekeeper because she’s friends with both women — something Emma absolutely abhors with every fiber of her being.

“Cashmere Burka” is our re-introduction to Gwen. It’s also the name of a stage play which she’s written under the pen name, “Nell Carter” because “it’s not the ‘right time’ for Phylicia Rashad anymore,” Gwen explains, an obvious nod to current events. She wrote it as another form of self-therapy, her “Gwenaissance”, as it were. Maggie thinks it’s a work of art.

“What’s it about? A ‘J.Crew’ opening in Afghanistan?”

Then Emma pumps her fist to celebrate her own zinger. Style points, baby.

This is the relationship Emma and Gwen have, for better or for worse. It can’t get worse…can it?

Oh, yes…Gwen has tapped Maggie to direct the play, something Maggie calls an “honor” — and also something that makes Emma want to throw up in her mouth. It stars some of the townsfolk and Mark on sets and props. He’s takes pride in his crafty nature (as if painting Emma and Maggie’s house wasn’t a big enough hint), comparing himself to Bob Vila. It’s too bad he’s dealing with Gwen — who wants him to build a “bay window” on short notice. When he fails to do so, she makes fun of his V-neck sweater, a wardrobe choice of his wife, “Bird Bones”. Then she makes him build a giant vagina. Why? Because “She’s lost. Her. Mind.” Mark declares. And he should know — he’s married to one of the craziest people in town. But as the play nears, things get more intense: a friend of Gwen’s finds out about the play thanks to Maggie who had no idea that Gwen wanted to keep it a secret. In a fit of rage, Gwen fires Emma from the production for forgetting her lines. While Maggie finds rejection hard to accept, Emma’s only so eager to leave the stage, yelling at her Mom all the live-long day. Maggie only joins her when she crosses Gwen at the wrong time. Suddenly, Maggie’s on Emma’s side, much to Emma’s dark delight. She even makes it a point to ask Maggie to let her have this moment. She told Maggie that her Mom was like this — but Maggie just chose to turn a blind eye to Gwen’s flaws. After venting to Emma, Maggie seeks to resolve the issue with Gwen — only to find out that she’s holed up in the women’s bathroom. At first, Emma and Gwen begin to throw verbal bombs at one another but Maggie separates them and tells Emma to go into a bathroom stall. It’s here that we learn that Gwen’s afraid. She’s not brave. She thinks that everyone out there is ready to see her as a fraud. In her emotional state, she reveals that Emma and Maggie are more brave than she’ll ever be…but as Maggie points out, they’re only that way because women like Gwen made them that way.

This episode is heavy on schmaltz but, thankfully, doesn’t lose itself and become a comedy sitcom-cum-tearjerker. The problem is that the humor and awkward moments with Gwen don’t always mix, so the episode feels a bit uneven. Gwen’s a puzzle you want to solve — but also stay away from — and that really hurts the episode rather than helps it. She’s just plain unpleasant. What also doesn’t help is the also-awkward b-story between Emma and her new guy, Dan (Kyle Bornheimer). While the two of them seem to have some chemistry, the quick physical nature of their relationship seemed both forced and rushed. It also doesn’t help that Dan’s character is a Rabbi and that he can’t be seen in public making physical contact with Emma — a strange little plot foible that’s resolved in all of five minutes, begging the question of why it actually existed at all. Still, the episode is enjoyable for what it is, with the best moment coming after the play goes on: the cast and crew mingle with the audience. Gwen’s “friend” Betty approaches Gwen to criticize the play, calling it “too raw for her taste”. Gwen, for the first time, accepts this criticism and simply thanks Betty for “coming out and supporting her”, which drives Betty to the theater exit. Maggie looks stunned. Gwen immediately snorts that Betty’s arms looked fat (she was wearing a tunic). Maggie chides her and says she thought Betty looked great. Gwen snaps her head at Maggie and tells her to let her “have this moment” — just as Emma asked Maggie earlier in the show.

That “moment”, whether Maggie knows it or not, is where we realize that, for all their differences, Gwen and Emma have a lot in common.