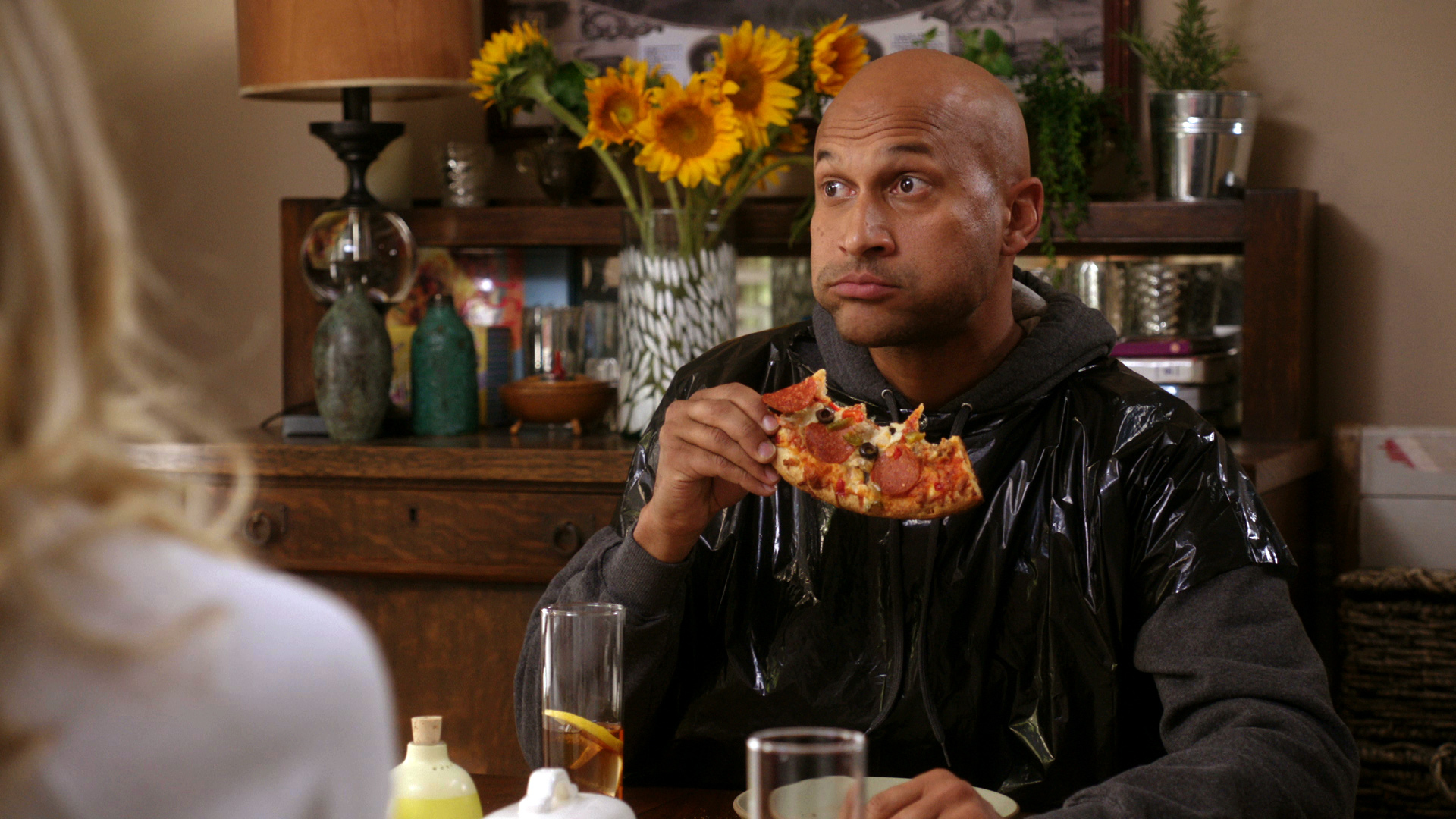 Mark is a wounded man — but not in the way you’d expect.

His foot is bandaged and elevated, resting on top of a pillow provided by Emma and Maggie after he fell off their roof during a botched home improvement project. He was only supposed to be fixing their weak water pressure. That quickly escalated to checking their insulation and discovering a bee hive within their walls. That became roof repair.

Now, Mark’s in pain. And he wants to watch “Murder, She Wrote” on Emma and Maggie’s TV. Emma’s exasperated. This isn’t the first episode of the show he’s watched today — and it won’t be his last.

“You’ve got to stop watching those!” she tells him.

“I’m in pain,” he whines. “I gotta go to Cabot Cove because nothing bad ever happens there…”

“ONLY bad things happen there!” Emma yells. “There’s a murder there like every week!”

“Employee of the Month” is an ironic episode which explores Mark, post-Bird Bones, but does so in its usual goofy fashion because Pinebrook, unlike Cabot Cove, doesn’t have tragedy and sadness — even in short bursts. Mark should be as broken as he was in “Knotty Pine”. Here, he’s unrestrained, doing laps around Emma and Maggie’s house (while wearing a garbage bag vest a’la Bradley Cooper in Silver Linings Playbook) and talking at the same speed Usain Bolt runs. He’s just working through his issues and living in a complex which is comprised of “mostly guys ousted by their wives and a couple strippers”. Even the Digiorno pizza he’s inhaling gets an automatic five-stars.

In the first seaons of this show, we saw Keegan-Michael Key play Mark as level-headed and with paintball shots of manic which only surfaced because of Maggie and Emma’s non-stop, whirlwind shenanigans. In “Employee of the Month”, Mark is acting alone, letting out all that frustration and energy in one sitting. He may be re-aligning the patio door drapes and resurfacing a wall while proudly showing off his work like he’s filming a show about flipping property for profit but the hyperactive handy man act is all hurt. As somebody who’s been down this road, I get it and I identify with it — but Key, as has been status quo with his character since the start of the second season, may be overplaying it just a bit. The avoidance of digging into Mark’s mental state is this episode’s Achilles’ Heel. While his issues may resurface on a future episode, the decision to present Mark as a man who suddenly drank an entire 4-pack of Rockstar laced with Cocaine and having him act like nothing has happened in order to force Emma and Mark into a “thing” is slightly disconcerting. As much as I like this show, there’s been a noticeable change in the production of this show. Whereas one could join the first season in the middle and not miss anything, the second season is almost a soap opera. This isn’t a bad idea but a lot of the running stories are a bit weak. For instance, I like Kyle Bornheimer as Rabbi Dan but he and Emma simply don’t share much chemistry. Initially, I thought we’d see a compelling love triangle but that doesn’t exactly work when his character only shows up for about four minutes over three episodes. I’m not even sure I should count the picture on Emma’s cell as a “cameo”. He’s so boring and unmemorable, he might as well be invisible. I really don’t understand what Emma saw in him except that she bumped into him on the street.

The other storyline concerns Maggie which is refreshing since she’s been a bit of an afterthought since the season began. She still works at “Rosie’s”, Pinebrook’s little bar and grill, and whether she likes it or not, she’s “Employee of the Month”! This, courtesy of her boss, Phil, (Matt Walsh of HBO’s Veep) who celebrates the occasion with a confetti popper, hugs and happy tears. While Maggie winces and begs off on the spoils (a plaque and a gift card to the restaurant she works at), Phil begs her to become full-time — then asks her for some tears. When a confused Maggie asks for clarification of that request, Phil nudges a shoulder at his office webcam. “I’m trying to get on Undercover Boss,” he shamelessly explains to her. She doesn’t want to live in this world anymore where awards are given to thankless jobs that require her to sing to customers on their birthdays. Conveniently, she’s given an out: as she’s always been the surrogate mother on the show (as was recently highlighted in this season’s “Cashmere Burka”) after taking the injured Mark to the hospital for a check-up, she bumps into an old school chum named Michaela (Jean Villepique) who also happens to be a nurse. Michaela is stunned that Maggie never followed her dream to become a nurse and dropped out of school. Unfortunately, Maggie explains, life got in the way what with the death of her parents, taking care of her brother, her marital woes and a baby. As Maggie soon learns from everyone around her, there will always be obstacles in life and they can always be overcome. The revelation about Maggie’s important because it finally gives her character a purpose. The problem, however, is that the exposition is, once-again, hurried along and too sudden to be believable. Obviously, this is a key moment in the series and coincides with Emma’s near make-out session with Mark on the couch, so it’s going to be interesting to see if Emma and Maggie support one another in their endeavors or turn on one another. Overall, “Employee of the Month” isn’t a bad episode at all. It has some funny moments but it feels uneven as the episode starts with Mark’s issues, plays cutesy, tosses a bunch of balls in the air, then catches half of them. Hopefully, this will lead to a meaningful close to the second season and a renewal for the series — but I feel like Playing House might be losing its way just a little bit.