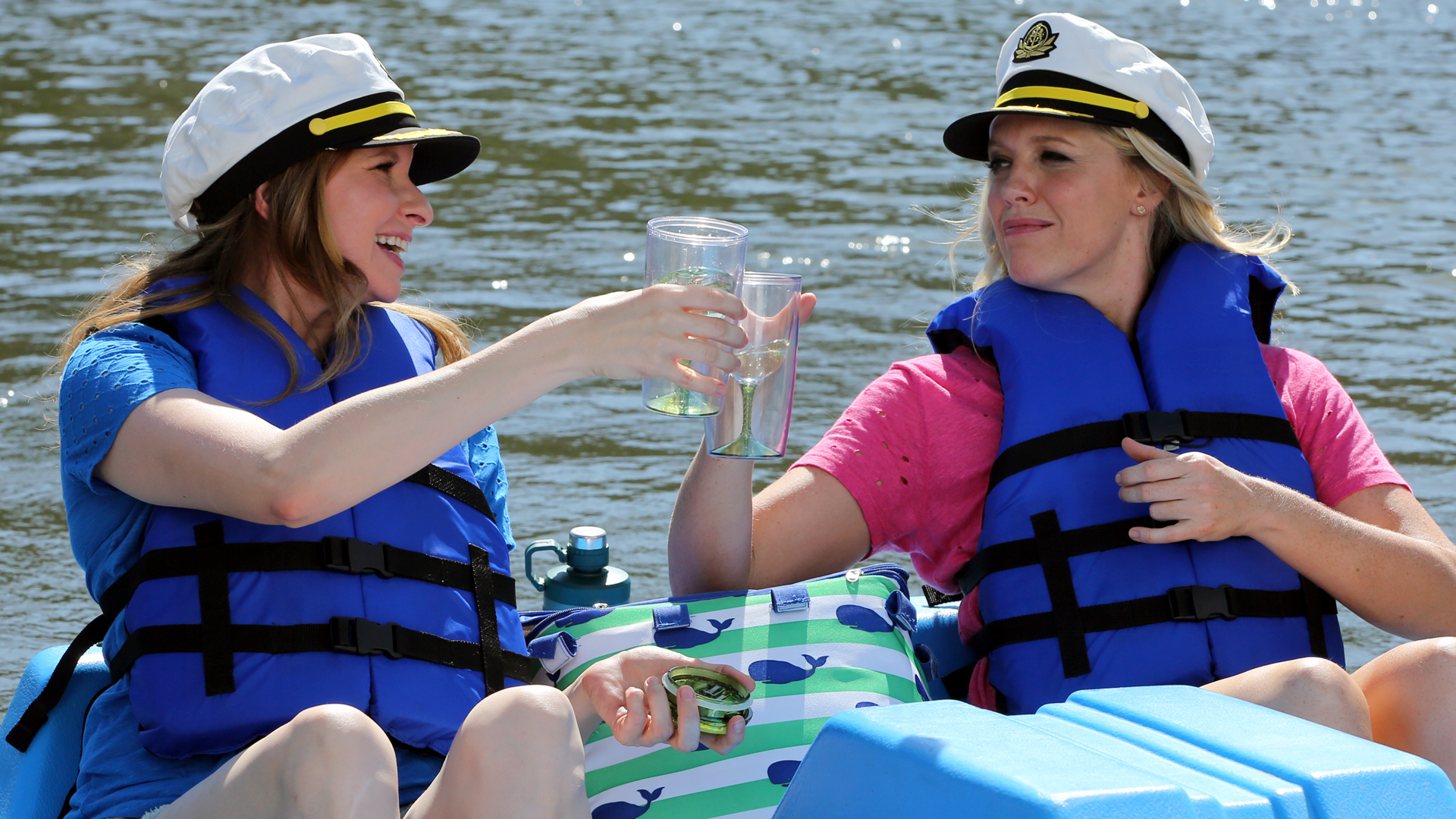 I’ve expressed my displeasure with Kyle Bornheimer’s character, Rabbi Dan. I’ve said that he’s boring as hell and might as well be invisible what with the lack of character development paid to him. In this episode, we finally get to see more of him. And I remain unimpressed.

This is, more or less, the episode I was afraid to see.

In “Kimmewah Kup”, Emma and Maggie are off to the famed “lake house” we’ve been hearing about since the first season. They’re gonna spend the weekend bonding and doing each other’s hair and make-up and take in a little “‘Terms of E’, followed by some ‘Fried Greens to the T’ and finish with some ‘Hope Floats’ with Sandra B.” Emma’s ecstatic about that last part. With guy problems and baby responsibilities temporarily in their rear-view mirror, the ladies are ready for a weekend of fun

If only Emma’s boyfriend, Rabbi Dan, weren’t along for the ride. He’s not actually invited, mind you. He kinda invites himself after he and Emma Facetime and text and call one another like love-starved teens much to the complete dismay of Maggie who just wanted to spend a little time with her friend. But there he is, solving the jigsaw puzzle it’s taken Maggie “three summers to complete” because the portion with the wagon wheel was tricky. This makes Dan’s love of jam bands almost tolerable. “Weirdly enough, at night, [Dan] prefers ‘Two Princes’ by The Spin Doctors,” Emma tells Maggie who winces in such a painful manner that we hurt with her. “Don’t knock it! It’s very athletic!” Maggie revisits that unfortunate vision in her head later on when Emma and Dan retire to the bedroom and blast it like stoned college students. This wedge in their relationships couldn’t have come at a worse time: the long-time friends have a grudge to settle with Conrad and Ronnie Custerman (Jason & Randy Sklar), twin brothers and lemonade magnates. The Kimmewah Lake Cup goes to the fastest crew ever to man a paddleboat.

Will Emma and Maggie make up in time to win the race? Of course they will. But you already knew that. “Kimmewah Kup” is a throwaway episode and the worst show of the new season. The usual Emma/Maggie banter is here but that really only carries things so far. The rest of this just isn’t very funny or entertaining. That may be because Kyle Bornheimer continues to flail aimlessly with the character of Rabbi Dan. The more we get to know him, the more we see him as an object to create strife. That’s not necessarily a bad thing, but the relationships between Emma and Dan continues to feel forced.

The other attempt to mine humor comes from Emma and Maggie’s interaction with the Sklar twins who are, essentially, the male equivalent of Emma and Maggie. If only they hadn’t been stuck with a horrible running gag: they jokingly refer to their lemonades as “‘Ades”. I’d put the word “jokingly” in italics except that the awkwardness of that running joke is already awkwardly reprehensible on its own. Such a strange choice for this show which, until now, never ventured into the realm of bad taste.

Overall, the episode is strangely unsatisfying, falling somewhere between sugary-cutesy and a sitcom you’d watch on Lifetime. I do hope the series has a strong finish because I’m not sure USA has this pegged for a third year.