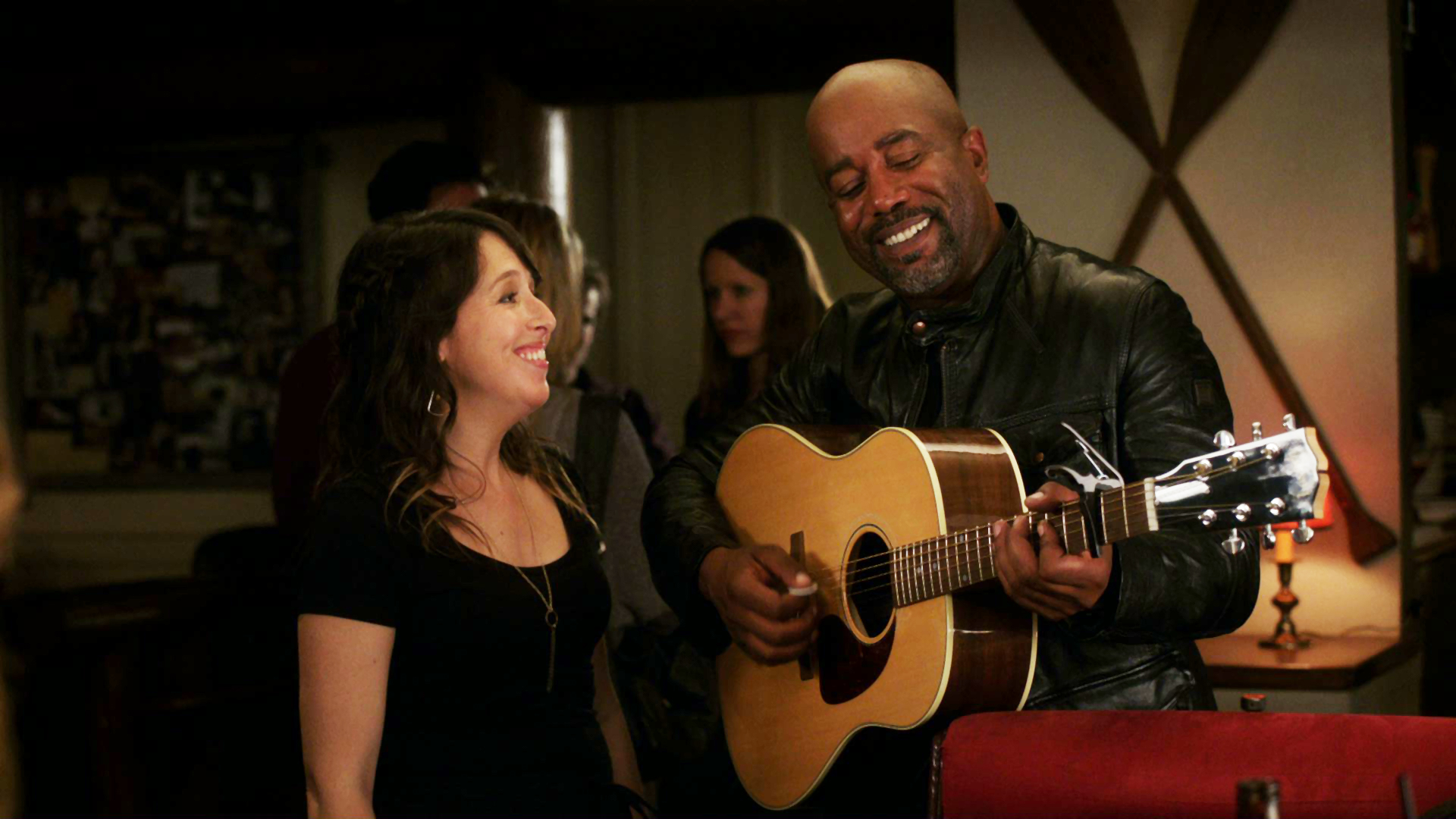 Maggie has a sex dream about HGTV’s “Property Brothers”. Emma surmises that it’s Maggie’s brain telling her that she needs to get “that body worked”. Maggie, however, is hesitant because she’s stuck in Mommy Mode, caring for and nursing Charlotte.

She’s about to go out in clothing she wore when she was carrying. When Emma begs her to wear something else, Maggie argues that her old clothes don’t fit. Emma isn’t having it and tries to tear Maggie’s jeans from her legs — only to discover that Maggie’s also wearing a nursing bra. Emma’s horrified by this and wants to know what happens if she and a guy get it on.

“Easy access,” Maggie proudly explains. “Want a boob? Flop, there it is.”

Maggie can’t even bring herself to talk about sex in front of Charlotte. Emma, perpetually unsatisfied with the word “no”, tells her talk about her sex dream in code, which gives us one of the best exchanges on the show:

“[The guys from the Property Brothers] took out their yardsticks and…they, uh…’measured’ me…”

“Different angles?! At the same TIME?!”

“Of COURSE I enjoyed it! Who doesn’t wanna be measured from different angles by The Property Brothers?” Have I mentioned how happy I am that this show has returned? It’s moments like these that made me fall in love with the show. to begin with.

Leaving the Mark angle squarely behind them (at least for now), the episode deals with Maggie’s sex life and Emma’s obsession with getting Maggie laid. Emma, with her take-no-prisoners attitude, sees a challenge and will stop at nothing to help her best friend have the time of her life. Maggie, however, doesn’t actually want to have sex, let alone go out with anyone and Emma’s overachieving nature is really starting to wear her out. She can’t even get a break from Emma in her own sex dream.

“You came in about mid-stream and started telling me how to do it better,” Maggie replies with a tinge of annoyance.

“But, that was helpful, right?” Emma asks. Maggie doesn’t think so. Emma’s disturbed and asks why Maggie didn’t tell her to stop.

When Maggie refuses the Tinder option, Emma goes completely off her rocker and prints out hundreds of photos of men from the famous dating app, wallpapering their entire living room. Maggie is visibly shaken by this.

“I brought Tinder to you,” Emma proudly announces before efficiently declaring that they’re now out of printer ink. Emma takes her around the room, showing her the great variety of men Tinder has to offer. After one go-round, Maggie’s once again seduced into Emma’s dark realm, hitting the bar and meeting several men who seem great, but aren’t quite compatible with Maggie.

“I’d love to see you parallel park,” says a young guy, before asking Maggie if she likes to “party and have fun”. Emma breaks them up before it goes further, explaining to Maggie that “partying and having fun” are euphemisms for “getting high and having sex with a bunch of people” — which the guy hesitantly admits is true.

“I wonder what he meant by ‘parallel park’, then…” Maggie openly ponders.

The next guy she meets is a bluegrass artist (played by musician Darius Rucker) — who Maggie inadvertently drives into the arms of one of her friends two minutes later. Maggie continues to swim through the pile and meets a guy who has kids but, oops, her breasts begin to lactate during their meet. A bit of a sign, she thinks, that she isn’t ready and that Charlotte’s her priority.

The episode ends on a bit of an ironic note, with Maggie leaving to be with Charlotte and Emma sticking around to meet a guy that Maggie said would be “perfect” for her — only that guy “wants to party” as well. Emma leaves in disgust only to, quite literally, bump into a guy who has no flaws except that he loves bread…and he wants to go out with her. How does this affect an future relationship between Mark and Emma? I’m sure things are about to get interesting.

This episode is just a step above the last episode in terms of storytelling and believability. Even the B-story feels less like filler, featuring Maggie’s ex-husband Bruce and brother Zach (Zach Woods) as “Duncles” (a combo of the words “Dad” and “Uncle”) offering their babysitting services, only to come to blows over whether or not Charlotte would like to watch Bruce do armpit farts or listen to Zach read Moby Dick while, later, dealing with Charlotte’s penchant for pooping during bath time.

Here, we see the show maturing and taking shape in its usual fun, easy-going manner where even the people we’re not really supposed to like are people you end up liking. We may have thought Tina was annoying one second until we realize she’s a human being with the same flaws and issues as anyone else. Zach’s plain odd, Bruce is a adulterer, Mark is complacent…but they’re all good people when you closely examine them. It’s refreshing that Playing House gives us two sides to every single character and doesn’t categorize them or make them into walking cliches.