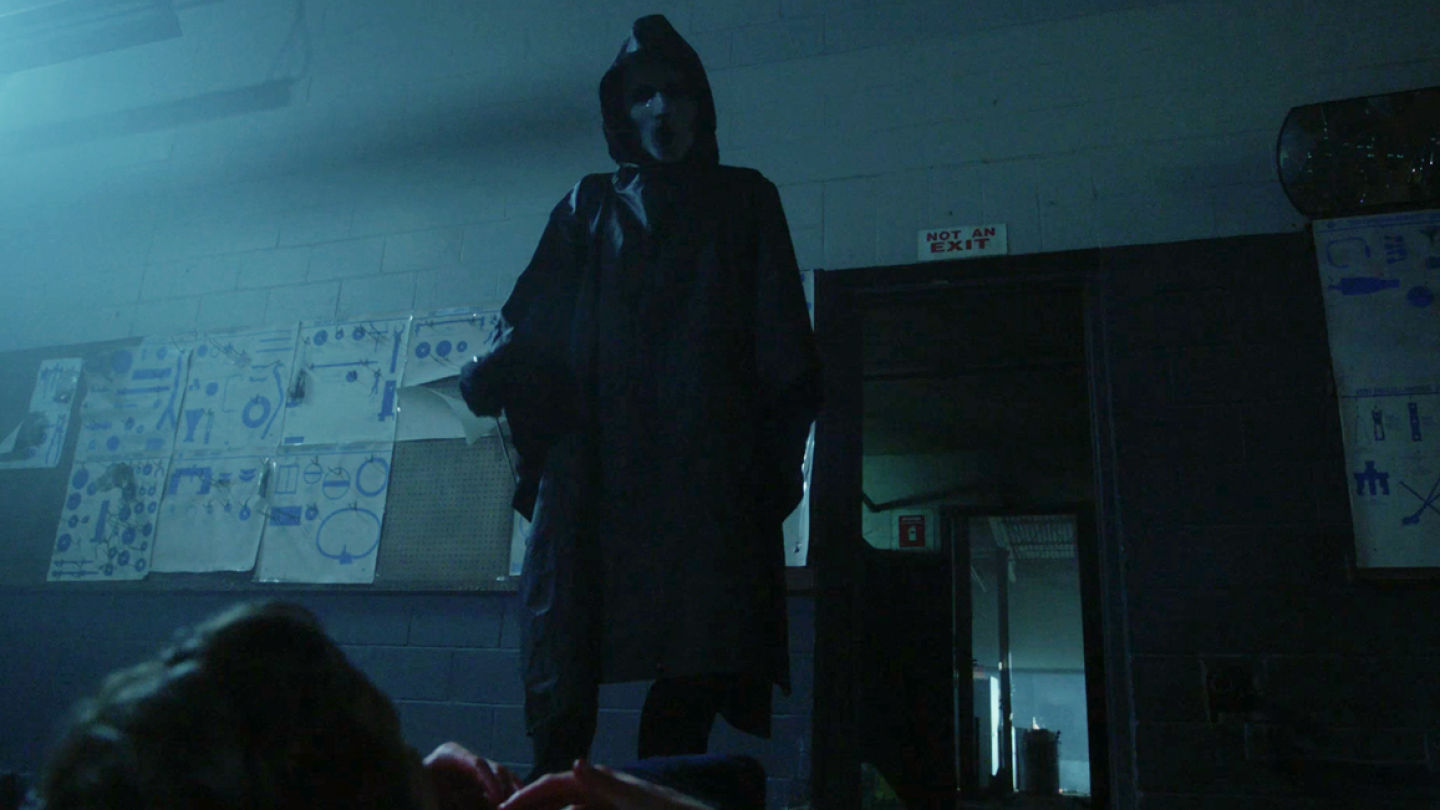 We are over halfway into the first season of MTV’s Scream and I’ve just stopped caring. As a writer, you take assignments (or volunteer for them) for the sake of reporting what you see so that people can read your take on a show or a movie. Sometimes, you get incredibly lucky and end up enjoying what you write about (Hannibal and Mr. Robot come to mind) and sometimes, you don’t.

I’ve been asked why I still write about this show by some of the people who read my reviews.

“It’s a job,” I say. “I choose what I wanna watch. I just want to write about something.”

“Yeah, but you can choose what you see most of the time,” They point out.

They’d be right. The thing is that I can’t quit now. This sucker is in the home stretch. It would be a crime for me to stop. I’d feel like a quitter. I also feel like I have a duty to continue reporting this shit-show. For better or worse, I have to see, for myself, if MTV crashes the series into a mountain or if they pull it out of its perpetual nosedive.

This week, we weren’t off to a great start.

Kieran and Emma, having just freshly humped all night in a field (crawling with bugs and snakes and, you know, A KNIFE-WIELDING MURDERER) decide to go for a ride to Brandon James’ house. Why? Emma (whose brain is obviously now running EmmaOS v3 for Morons) wants to “get over her fears”. What could be worse than an arbitrary left-turn into Stupidland? How about Emma showing up as the killer and murdering herself because — OMG! THE LAST FEW MINUTES WAS ALL A DREAM!!!

Noah and Audrey go over the suspect list which is comprised of everybody and anybody. So, it’s a good thing the writers have whittled it down for us. As for Lakewood’s esteemed crack squad of “police officers”, they’ve narrowed it down to one person: Audrey. Why? Her DNA is on the inside of the Brandon James mask. Detective Brock’s ready to move in for the kill on this information alone which makes no sense whatsoever since all that evidence was “inadmissible” two episodes ago. But, whatever. She’s already had Audrey escorted out of class by the police in front of her peers and she’s illegally questioning Audrey without a legal guardian, so why not go the full nine? At least the show does us the service of having that last inaccuracy corrected…via Hud. Yep, he arbitrarily shows up to help Audrey during his “Leave of Absense”. This show and their cops…

Can I just take a moment to gush about Lakewood’s finest?

I SALUTE THE COPS OF MTV’s Scream:

Noah’s disturbed that the police have taken Audrey in. He thinks it’s Mr. Branson who looks like he’s aged ten years since he stopped “privately tutoring” Brooke. Apparently, Noah found out that Mr. Branson’s name isn’t “Seth Branson”. It’s something else. He changed his name before coming to Lakewood. But his mind is changed after Audrey manages to call he and Emma so that they can retrieve a memory card from her camera. It contains video shot from the night of Nina’s murder and features Audrey yelling into the camera that she’s going to make sure that Nina “won’t bully anyone ever again”. In the next ten minutes, Noah manages to name-drop three comic book villains, Heisenberg from Breaking Bad and says he feels like Frodo in Lord of the Rings before watching the Audrey video and declaring that he needs a “Men in Black mind-wipe”.

Are the writers getting paid by the pop-culture references? I mean, look at this…this is just this week:

And it’s painful to hear them do it, too. Like when Brooke says:

Really? Has she even seen that movie?

There’s a moment on the season premiere of USA’s Playing House where Jessica St. Clair says she feels like “Keyser Soze” breaking into Mark’s house because “Spacey’s in the movie, bustin’ perps and takin’ names and people are givin’ him cash…” Her friend Maggie immediately reacts: “You haven’t even seen The Usual Suspects. Kevin Spacey’s not a cop. He’s the villain!”

That’s how I felt after hearing Brooke say the Gone Girl line.

Anyhow, Emma and Noah work together to exonerate Audrey, much to Detective Brock’s chagrin. “If I’m right about this, and we let Audrey go and another person dies, you’re just as guilty as she is,” says Brock to Emma in the most nonsensical statement made by a cop in a television show. Yes, that includes CHiPs. (And that is how you make a pop-culture reference! HA!) The good thing about this? Audrey’s father suddenly exists. That’s another really weird thing about this series: the parents only exists when it’s convenient to the plot. We’ve never seen her father before this. According to IMDB, his name is “Pastor Jensen”, which opens up all kinds of possibilities in regard to their home life. Could Pastor Jensen be one of those overbearing religious parental types? We don’t find out in this episode. Here, he’s like, “Oh, hai. I exist now. I’m her Dad. We want a lawyer. Oh, she’s not guilty? Better take my DAUGHTER home. Because I’m her DAD!” That’s how this series rolls.

Speaking of Brooke, she’s still hanging out with Jake while Will suffers in silence. Brooke tells Will to “make things right” in terms of the video blackmail scheme involving her father. So, Will turns to Piper who, outside her little true crime podcast, doesn’t seem to have any gainful employment besides sitting inside Lakewood’s homely little coffee shop, harassing people. He promises to tell Piper the truth about Nina — but, instead, decides to bring Nina to another abandoned warehouse (Lakewood’s littered with these, apparently) where he gives her father his money back and the blackmail tape. This, after Jake tells Will that the police will find him “in pieces in a ditch”.

The honorable Mayor reaches back for a gun — but Will tells him “I’d rather not die today for doing the right thing,” before promising that he won’t say a word about what’s on the tape. Piper’s surprised and she’s ready to go public with what she knows — until GhostMcMeltFace shows up to ruin the party, knocking Piper near-unconscious, stabbing Will and kidnapping him.

The episode gets a slight tick up from last week just for Bex Taylor-Klaus’s performance. She’s the only person on this show that I like next to Noah. Learning more about her darker side this week felt right. You can see that bubbling up inside her each episode and it was nice to finally see some character development. She’s right on that edge. Right there. And I like when she’s paired up with Noah because he’s such a perfect foil for her. A Superman to her Batman, as it were.

Unfortunately, the show just continues to stall. There’s nothing even remotely interesting about anyone or anything else and the audience suffers as a result.