‘Scream’ review: ‘In the Trenches’ 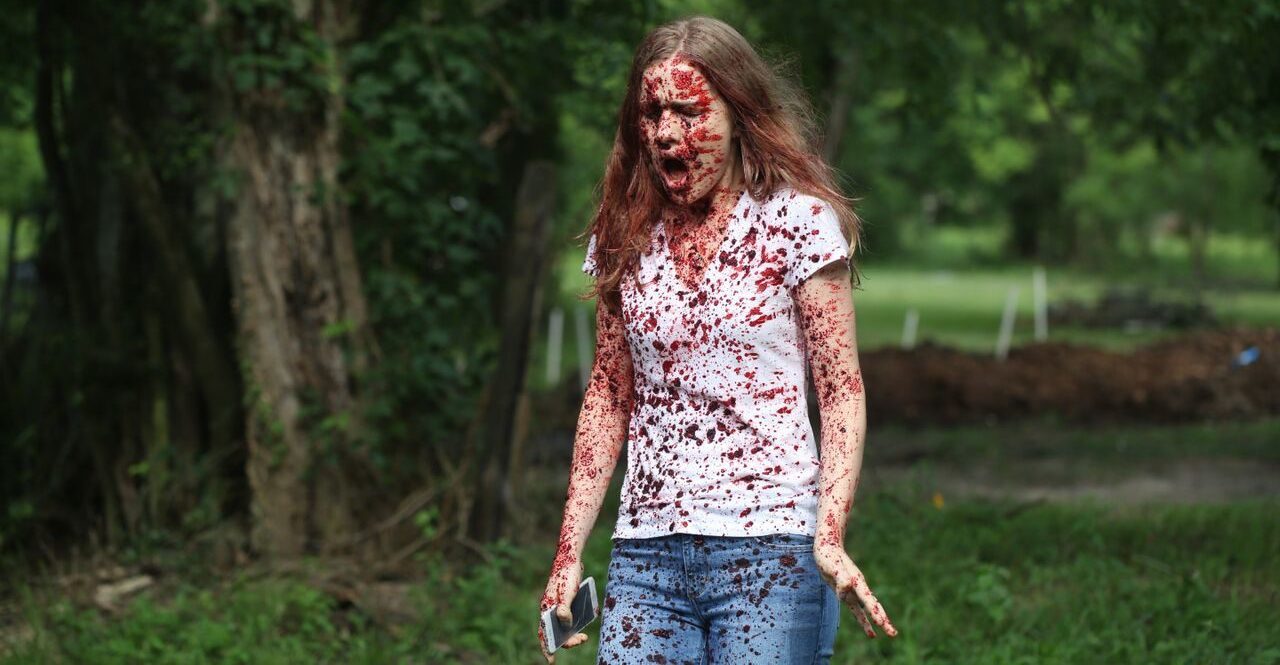 No, this doesn’t work, either.

Last week, Audrey was brought in for questioning by the Lakewood Police. The next day, she returns to school and Noah’s part of a movement to get her released. He’s even wearing a shirt that reads, “FREE AUDREY”. She was only in police custody for 8 goddamn hours. Audrey can’t believe any of this and, JEE-ZUS, we’re on our first pop-culture reference: The Shawshank Redemption. Just because Audrey was in a police station. At this point, I’m convinced the writers are just Googling “movies about X” and then picking the first one they see that might loosely apply to the situation at hand. What’s worse, they can’t even let it die a quick death: Audrey rattles off some “prison slang” for Noah because Audrey was totally “in prison”.

So, in this episode, nobody knows where Will is. If you’ll remember, he and Piper were attacked by GhostMcMeltFace. She was knocked out and Will was kidnapped. Nobody really gives a damn about Will (audience included) since he pretty much betrayed the trust of everyone around him — but, because Emma got a cryptic text from him (after slapping him and saying “we’re done”) they’re all like, “We care again…so…where’s Will? Anyone see that lovable rascal?” Cue the holy shit out of Piper who, I swear, pops out of the floor and appears in front of people like the goddamn T-1000. This woman’s timing is impeccable as fuck and if she’s the killer, this is some terrible telegraphing. NO COPS EMMA, the Killer warns her via spray paint on a wall in that burnt-out warehouse. Why couldn’t he just tell her that over the phone? He calls her right after she reads his freakin’ mural. At this point, I don’t feel sorry for her. If she got a tap on her phone, this would all be over in about three hours. Then again, this is the Lakewood Police Department and they couldn’t listen in on tin cans connected with string. Where is Will, by the way? In a bowling alley. An abandoned bowling alley. One with electric power still working! I probably shouldn’t be complaining too much. We’re probably lucky we didn’t get a Big Lebowski reference. Also, GhostMcMeltFact isn’t very smart. Having tried to one-up her with the “NO COPS” demand, Emma gets by on a technicality, bringing Noah, Brooke and Jake there instead. Of course, the advantage goes right back to GMMF once Emma has everyone “split up”. Twice. And she even says, “I’ll be right back” once — and there’s Noah, creaming his pants, he’s so excited to point out that those are “no-no phrases in horror films” because Scream is just so meta, it doesn’t know what to do with itself. When the groups are apart, they immediately begin accusing each other and speculating on who the murderer might be. Then, predictably, they get chased around by GMMF him/herself after Jake vanishes to “go to the bathroom”. The above pic is the result of Brooke laying eyes on GMMF. Brooke runs away. The Killer does not chase her. They just stand there, holding the knife. Meanwhile, Emma and Noah find Will. He’s just fine. Never mind that moment last week where he got stabbed in the stomach and lost two pints of blood in ten seconds. Will’s a goddamn mutant because the wound has closed up, so that’s good. But Emma’s not convinced and suddenly her survival skills from her three tours in Afghanistan kick in: she duct tapes Will’s wound shut. And all I can think of is the giant shockwave generated by Will’s scream when the hospital tears that son of a bitch off. The kids survive another GMMF attack. Noah calls Audrey who is away from the whole mess but the connection fails, so every stupid thing that could possibly happen is happening. Oh, wait…no, I’m wrong.

I forgot to mention that Brooke finds Jake with a knife in his heart. Also Jake’s still alive. Also, Brooke pulls the knife out of his goddamn heart. He’s even able to walk. That’s nothing. GMMF shows their face again — and Will, who could barely move earlier, tackles them before the cops bust into the place to take over. Wait, what?! Lakewood’s finest in a successful raid?! I must be in Bizarro Land. As Emma watches the paramedics load Jake and Will into ambulances, the love triangle for the ages begins as Kieran shows up (he was having dinner with his Dad and Emma’s Mom) and wants to know why Emma wasn’t truthful with her. The two ultimately decide that they shouldn’t be together — and Emma wants to go back to Will. In fact, Will calls her right after Kieran leaves with blue balls and a broken heart. He wants a date. So, Emma goes. Only it’s a trick. Will’s been abducted again and GMMF has rigged a giant saw to chop him in half if Emma steps into a thin trip wire — which she does. The pic at the top of the article? That’s the result and the last image we see before the episode cuts to black.

I cannot tell you how irritating and nonsensical this episode was. Not only should Will and Jake be deader than Disco, both are still alive. Well…one is still alive. Will’s dead. His murder is meant to shock the audience, delivering what we’ve been missing — and that’s how it feels. It’s gruesome. But, to me, it’s also forced. It feels like the writers just tacked it on the end to give their target audience what they crave — except I’m really not sure how he’s “dead”. I mean, he was stabbed in the gut and should be in the hospital, no? So, how the hell did GMMF capture him AGAIN, then set him up in a trap that really, by all means, make no physical or logical sense? The whole situation is like the ending of a bad joke, a shaggy dog story. I don’t think I have any faith left that it’s going to deliver on its promise to wrap the whole thing up in a satisfying manner. The show works when it isn’t bogged down in its own stupidity. It’s done that once. That episode worked because the entire cat-and-mouse guessing-game murder plot made sense and the person who died was somebody who had more emotional weight than Will has had in all seven episodes. When Riley died, I felt something. When Will died, I felt nothing. This is MTV’s Scream, a show where kids make quips about movies and TV shows and somebody we don’t care about dies every few episodes. The show continues to falter week after week and this is no exception.