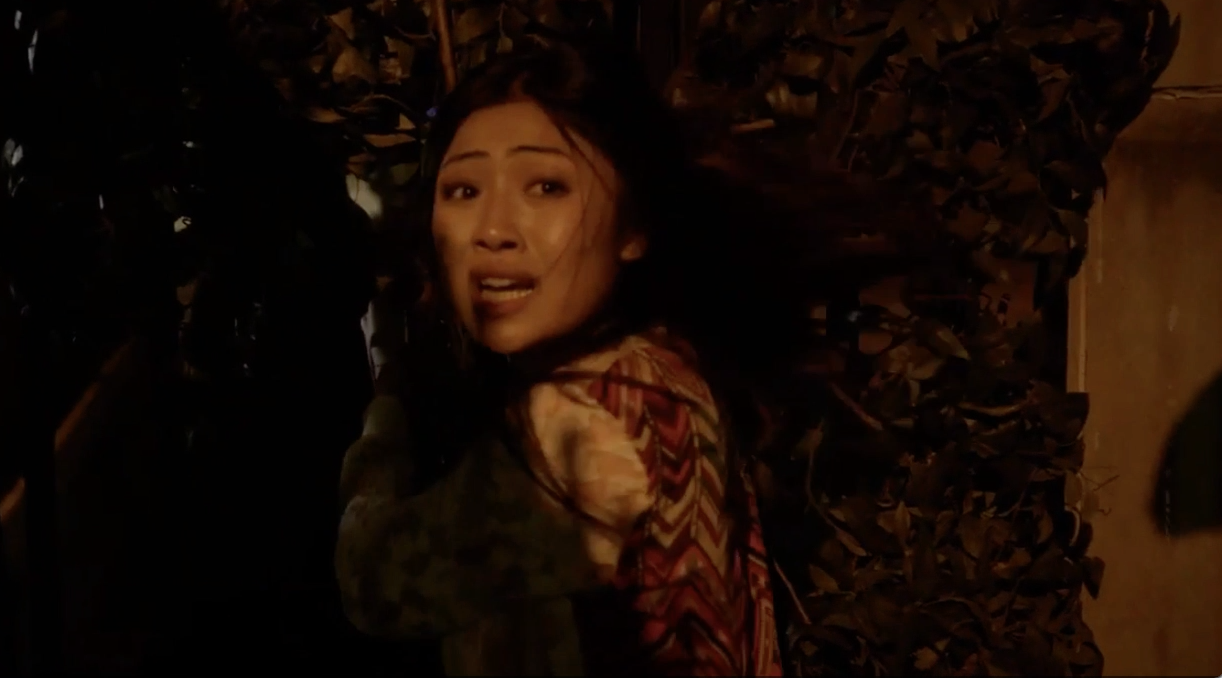 ***THERE WILL BE MAJOR SPOILERS IN THIS REVIEW/RECAP.***
If that’s not your brand of Gin, go elsewhere.

“In my humble opinion, nobody puts on a mask and commits a murder like that just ONCE. The real question is…who’s next?”

Fittingly prophetic words from Noah, the pop culture geek of the show, as he unknowingly foreshadows the death of a major character on the show — or, at least it’s “important” by this show’s standards. For the last two weeks, Scream has flailed desperately, attempting to connect with everyone outside their young target audience. This episode manages to accomplish that in abundance.

Make no mistake, the episode still suffers from the same bullshit we’ve been seeing since the series started a couple weeks ago.

Boring sub-plot involving Jake and Will and their money-making TMZ videotape business?

So why the praise?

This episode did one VERY important thing: it cut the bullshit the way a butcher cuts excess fat from a steak – only enough left for flavoring and nothing more. On top of that, it actually played upon the set strengths and weaknesses of each character and turns them on their head.

But the relationship has become the bright spot of the show whose previous bright spot was the death of Bella Thorne in the opening of the first episode.

The bad news? A major character bit the dust and it wasn’t pretty.

The good news? The build-up and (pardon the pun) execution is brilliant and should give us all the emotional aftermath and pay-off we’ve been waiting for.

From beginning to end, the killer torments Emma, texting her about her mother’s secrets which leads to Emma finally seeking answers and piecing together her Mom’s past. For the last couple of weeks, she’s been hounded by the killer and been on the defensive. This episode, she’s making discoveries like she’s Nancy Drew. She even texts the Killer back, looking for answers. The Killer, of course, isn’t gonna oblige but Emma’s determined. She confronts her Mom about the human heart she was sent in the mail and reveals that the same person has been calling her. When her Mom balks, Emma tells the Killer to stuff it and says she’s not playing their game anymore.

To which the Killer ominously replies, “Then I’ll find someone else to play with.”

Suddenly, Brooke and Riley are sent text messages from Tyler, the chief suspect in Nina’s murder. He wants their help and he needs it now. Riley wants to “hear him out”. Emma and Brooke want to go to the police. The latter decision proves to be the ultimate choice — which just adds to ensuing tragedy. The police elect to use the girls to set Tyler up so they can bring him in — but, predictably, that doesn’t happen. The Killer pays somebody to show up at the meet.

With the police away from the station, the Killer starts moving pieces on the chess board.

Having seemingly broken him down, Brooke gets a text from Seth asking her to meet at a hotel for sex. As Brooke is incredibly arrogant, she goes. When Emma finds out she’s gone, her and her mother go looking for her — leaving Riley alone. From here, the Killer makes Emma “choose” who dies: Brooke or Riley. Believing she’s got the upper hand with Riley safe at the police station, Emma tells the Killer not to hurt Brooke.

The thing Emma forgets is that Riley wanted to help Tyler. So, when “Tyler” texts Riley, telling her that he’s “in the parking lot”, Riley falls for it. The Killer chases her, corners her, stabs her and cuts an artery in her leg — and all of this is as visceral and palpable as anything seen in the film franchise. You can almost feel it. But even with the murder over and done with, the part that hits you emotionally happens after the killer leaves: when Riley, knowing she’s about to bleed out and die, starts a video chat with Noah — and he has to watch her die of blood loss as she begs for his help.

The moment is unlike anything in the Scream series. In the films, you care enough about the characters that you want them to escape from certain death. If they died, you were shocked and slightly disappointed — and you had about a half dozen other characters to care about.

Here, you actually feel terrible for Riley as the life drains from her body and you want justice for it.

The brilliance of all of this cannot be overstated. The underlying theme is “trust” and the consequences of giving it or taking it for granted. The Killer asks Emma for it. Brooke places her trust in a man who is unable to give her the affection she craves. Riley places blind faith and trust in Tyler — and the Killer makes all three of them pay, physically and emotionally, for their misguided faith. You may be screaming, “You’re an idiot for going out alone” until you realize that these kids are making logical decisions based on who they are.

Seeing the pain on Riley’s face, hearing the anguish in Noah’s voice as she slips away from him, seeing this twisted chess game play out makes me both hungry and hopeful for more of the same.

Ladies and gentlemen…we have a show.