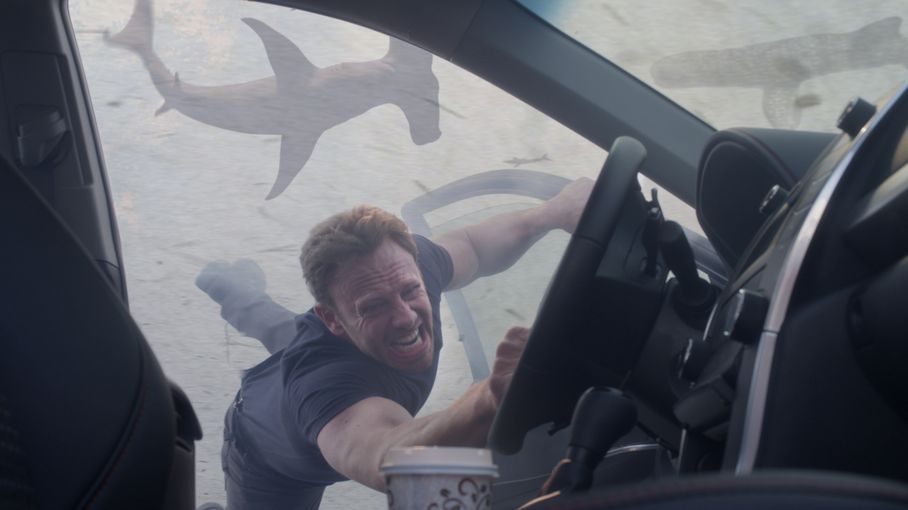 The third entry in Asylum’s “Sharknado” franchise is the most ridiculous of the three entries yet — and I’m not referring to Mark Cuban and Ann Coulter playing the country’s President and Vice-President, respectively.

“Sharknado 3: Oh Hell No!” premieres tonight on SyFy and sees everyone’s favorite shark slayer, Fin Shepard (Ian Ziering), returning to defend the masses against the sea beast-infested storms. After receiving the Presidential Medal of Freedom from the President and becoming the first member of “The Order of the Golden Chainsaw” (look, stay with me…it only gets goofier from here), Fin discovers a brand-new Sharknado forming — and it’s heading to Orlando, Florida’s Universal Studios, where his pregnant wife, April (Tara Reid) and her mother, May (Bo Derek), are vacationing.

How does he know this?

“I can sense these storms now,” he tells The President. “These sharks…they have a scent and it’s not a pretty one.”

As Fin desperately tries to get to his wife, he bumps into Nova (Cassie Scerbo), his cohort from the first film. It turns out she’s been doing the same thing Fin’s been doing for the last year, only at a national level: she and her shark-killing partner, Lucas (Frankie Muniz), have a Sharknado Battle Station in a converted and armored RV, containing electronic equipment and weather-tracking that even NASA would be jealous of.

In fact, nobody’s smarter than Fin and Nova, if this award-winning dialogue is any indication:

“If the storm heads south, it’s gonna get warmer and it’s gonna get stronger — and it could destroy the entire East Coast!” Fin tells a UNITED STATES ARMY GENERAL.

“That’s what the Pentagon said, too,” The General replies.

“I need a plane…my family’s in Orlando!” Fin tells him.

“I know…that’s what they told me.” The General says.

Does the Army give Fin and Nova a plane? Of course they do. This is “Sharknado”, not “The Unit”. From there, it’s off to Orlando for the obligatory mayhem and madness — starring Universal Studios! Xfinity! Nascar! Subway! COMCAST!!! The product placement is so in your face, it resembles those award shows from the days of old when the announcer would give you the name of every single star appearing that night in alphabetical order.

The antics, however, just aren’t as fun this time around. This entry lacks the devil-may-care, free-wheeling attitude of the first two films and comes off as an attempt at something more real and down-to-earth — which should never be done when you have a movie about sharks that can fly and aim themselves at things that have a body heat and a pulse.

Much of it is spent with Shepard as you watch him go place to place, grimacing and telling others all about the people he’s lost over the last two years. “Sharkacane” is actually teased for a moment, but one thing at a time, guys. There isn’t a whole lot I’ll reveal about the final act. To be honest, you’ll thank me for that. First, I can’t do it justice and, second, one of the joys of the series has been the frantic, over-the-top climax and resolutions you used to see in early Robert Zemeckis films, so it would be a crime if I were to even hint at the frontiers the film ventures into.

While it starts well enough (giving us a cutesy James Bond film opening), it doesn’t really hit Ludicrous Speed until the third act in the theme park and even then, you’re drowning in even more gratuitous product placement and corporate shill work. While finally managing to give us the “OMG!!!!11!!!1!!!!” ending we’ve come to expect from this series, even the final reel comes across as tacky, gratuitous, cheap and self-serving.

And maybe fans of the series will eat it up, if you’ll pardon the pun. I felt ripped off. That’s unfortunate, seeing as how the first two films left a smile on my face.

“Sharknado 3” is a shell of what it used to be — tired, lazy, generically manufactured and heartless as its titular weather phenomenon.