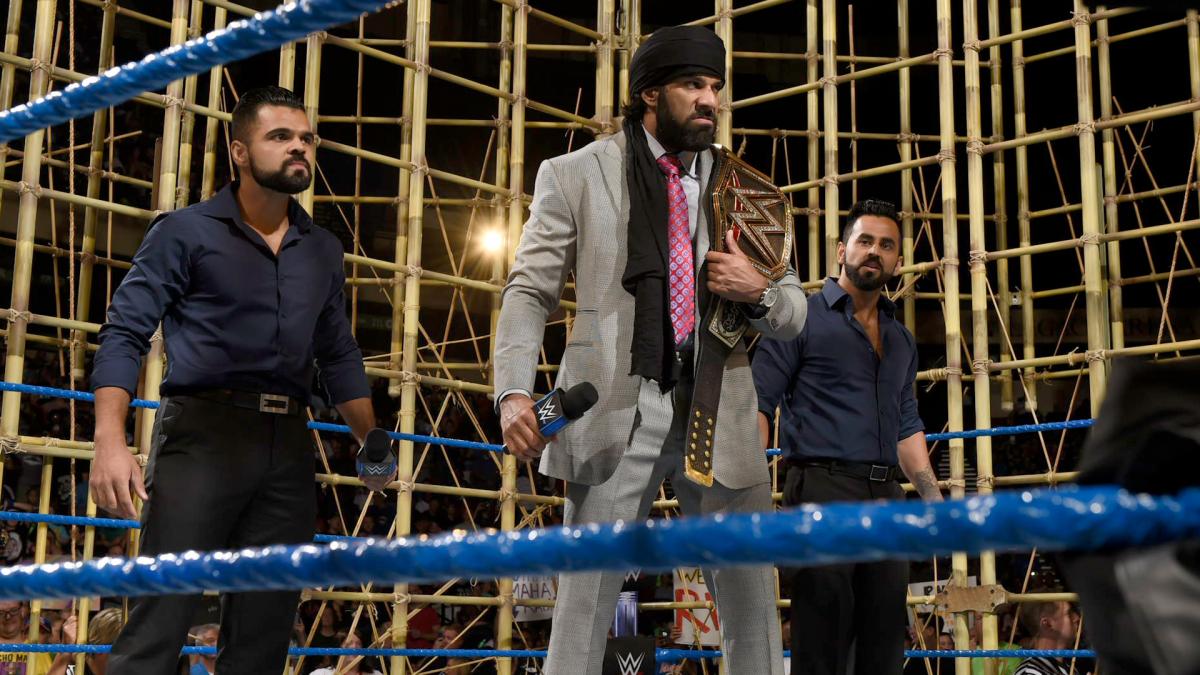 It’s the go home show for Battleground and Jinder Mahal has brought the Punjabi Prison with him to Smackdown. My guess would be to get people interested in what the match is going to look like if they haven’t been around for more than ten years, which is about as good of an idea as they could have for this. Let’s get to it.

We open with a video on the Punjabi Prison, even though it doesn’t have a ton of history.

Here’s Mahal to enter the Punjabi Prison, which is still fairly ridiculous looking. Mahal promises to bring Orton inside here and destroy his legacy. Oh come on that stable was destroyed years ago. The Singh Brothers explain the rules: there’s a regular cage (made of bamboo that is) with four trap doors. A wrestler can ask to open the door for sixty seconds but once it closes, it can’t be opened again. Then there’s another bamboo cage around the ring which has to be climbed over. The first person out of both structures wins.

Mahal speaks some Punjab but here’s Orton to interrupt. Orton talks about how crazy Mahal is to want to lock himself inside a cage with him and starts to climb the cage. He stops though and just promises to destroy Mahal to wrap things up without going in to fight all three at once.

Kofi starts fast and takes Jimmy down before annoying him with some dancing. A good looking flip dive to the floor drops Jimmy again and we take a break. Back with Kofi making a comeback with chops and kicks, only to have Trouble in Paradise countered into a Death Valley Driver into the corner for a close two. Kofi shoves him off the top but has to yell at Jey, allowing Jimmy to roll through a high crossbody for the pin at 8:38.

Rating: C-. The clip in the middle hurt this a lot as we went from one person in trouble and flipped it around during the commercial. Kofi losing is interesting and could suggest the Usos losing the titles on Sunday. New Day doesn’t need them but they’re instantly going to make the titles more interesting than the Usos have.

The women’s division wants to beat Lana up but Tamina cuts them off. Natalya suggests Becky vs. Charlotte, the latter of whom says that wouldn’t be competitive. Shane McMahon makes the match.

We recap last night’s announcement that Jason Jordan is Kurt Angle’s son. I don’t mind it as much as some people do but they need to walk a very thin line on this one.

Chad Gable sits down with Renee Young for an interview and still looks stunned. He didn’t have any heads up on this but Jordan did call him to talk about things later. Gable has some ideas for his future but he’s keeping them to himself for now.

This is Mike’s in-ring debut. Sami hammers away to start and sends Mike outside for a running clothesline. Mike is sent into the barricade as this is one sided so far. The exploder looks to set up the Helluva Kick but Maria comes in for the distraction. Mike blasts him in the face and hits a Samoan driver for the pin at 2:59.

Here’s John Cena to talk about the flag match with both the American and Bulgarian flags hanging over the corners. Cena runs down Sunday’s card before moving on to the flag match, where you have to get your flag from a pole and plant it at the finish line. He promises we’re going to remember the flag match more than anything else.

Cena gets all fired up and promises that he’s ready because the USA is a nation of fighters. He lists off some important moments in American history, including the Civil War, World War II and 9/11 before waving the flag. Cue Rusev to beat Cena down and knock him out with the Accolade before waving the Bulgarian flag. This was WAY too serious and way too well done of a promo to waste it on a flag match against Rusev.

Shinsuke Nakamura comes up to AJ Styles but doesn’t want to talk strategy for tonight’s main event. Instead he’d rather point at the US Title and say one day, he’s answering the Open Challenge. I’d really hope that’s at a major pay per view.

Natalya is on commentary. Feeling out process to start with Charlotte powering her down and grabbing a headlock. Becky comes back with a one footed dropkick but Charlotte backflips away twice. The threat of the Disarm-Her sends Charlotte outside and we take an early break.

Back with Becky throwing her back inside but Charlotte forearms her down to take over. A knee to the back of the head gets two on Becky, who escapes the Figure Four. Becky springboards into a forearm to Charlotte’s chest and there’s the Bexploder. The Disarm-Her is countered with a big boot for two but the moonsault misses, allowing the Disarm-Her to make Charlotte tap at 9:00.

Rating: C+. It’s very clear that these two are miles ahead of the rest of the division but worry not because there’s always the chance that Nikki Bella can come back and show them how to work. Becky winning is a good idea as she hasn’t had a big win in a long time and a clean win over Charlotte is quite the accomplishment.

Post match Lana and Tamina come out to clean house. Tamina stares at Lana for a bit (Who can blame her?).

Naomi is ready to face anyone but Carmella comes up with the briefcase and says she’ll see Naomi on Sunday.

It’s time for the Fashion X-Files with Breeze as Skully, complete with a red wig. Breeze doesn’t buy the idea of the paranormal but there’s a ghostly moaning. Never mind though as it’s just Aiden English warming up. A white light comes down from the ceiling with Breeze saying he wants to meet Alf, Max Moon and Chewbacca. It turns out to be a delivery guy who turned the lights on so they could sign for a package. Breeze won’t answer what’s in the box because it’s Tully’s (Fandango’s stick horse) head. There’s a note saying Battleground, where things will be concluded.

Corbin jumps Nakamura in the aisle and Owens joins in until AJ FINALLY comes up to help. We hit the break before a bell and are joined in progress with AJ in trouble thanks to a hard forearm from Corbin. AJ gets over for the hot tag to Nakamura, who immediately goes to Good Vibrations on Owens.

Corbin low bridges Nakamura to the floor though and Owens stomps away in the corner to take over. Baron grabs a bearhug for a bit before sliding under the bottom rope, only to have Nakamura waiting on him for a change. The double knockdown isn’t enough for the hot tag to AJ as Corbin is up first (makes sense for a change) to knocks Styles off the apron. Nakamura comes back with the rapid strikes, including a kick to Owens before he can interfere.

Deep Six gives Corbin two but the enziguri is enough to make the hot tag off to Styles. More rapid strikes have Owens in trouble but he takes AJ’s head off with a clothesline. Corbin comes in and is caught in a fast Calf Crusher, sending him scurrying to the ropes. Nakamura is sent into the timekeeper’s area, leaving AJ to have to escape End of Days. Owens makes a blind tag though and it’s a superkick into the Pop Up Powerbomb for the pin at 9:53.

Rating: B. They were working out there and it was a hot match as a result. All four were moving and hitting their stuff to give us a good match to wrap up the show. At least it was a tag match where Styles took the pin, though I can’t imagine them putting the title back on Owens so soon.

Overall Rating: B-. Good show this week to build up to another B level pay per view. There’s only so much you’re going to get out of this Sunday so a strong go home show is always a nice surprise. Cena vs. Rusev feels like a highly glorified warmup for Cena before whatever he’s doing at Summerslam but other than that, I’m interested in almost everything else they’re doing, at least to a degree.

Remember to follow me on Twitter @kbreviews and pick up the Histories of Saturday Night’s Main Event and Clash of the Champions, now in PAPERBACK. Check out the information here:

And check out my Amazon author page with cheap wrestling books at: