In the middle of an innocuous strip mall, surrounded by southern San Jose’s endless suburbia is a place I consider to be one of our neighborhood’s best kept secrets: “Stevie’s Bar and Grill”. With 30 beers on tap, a full cocktail bar, a hell of a kitchen serving up some awesome pub grub, and an easy-going beach bar-like atmosphere, Stevie’s has quickly become one of the most popular bars in the area.

We’re here for our weekly beer tasting — and, this time, we’ve got a special guest with us: Steven Hutsell, a regular at Stevie’s, a beer connoisseur, and one of my good friends. 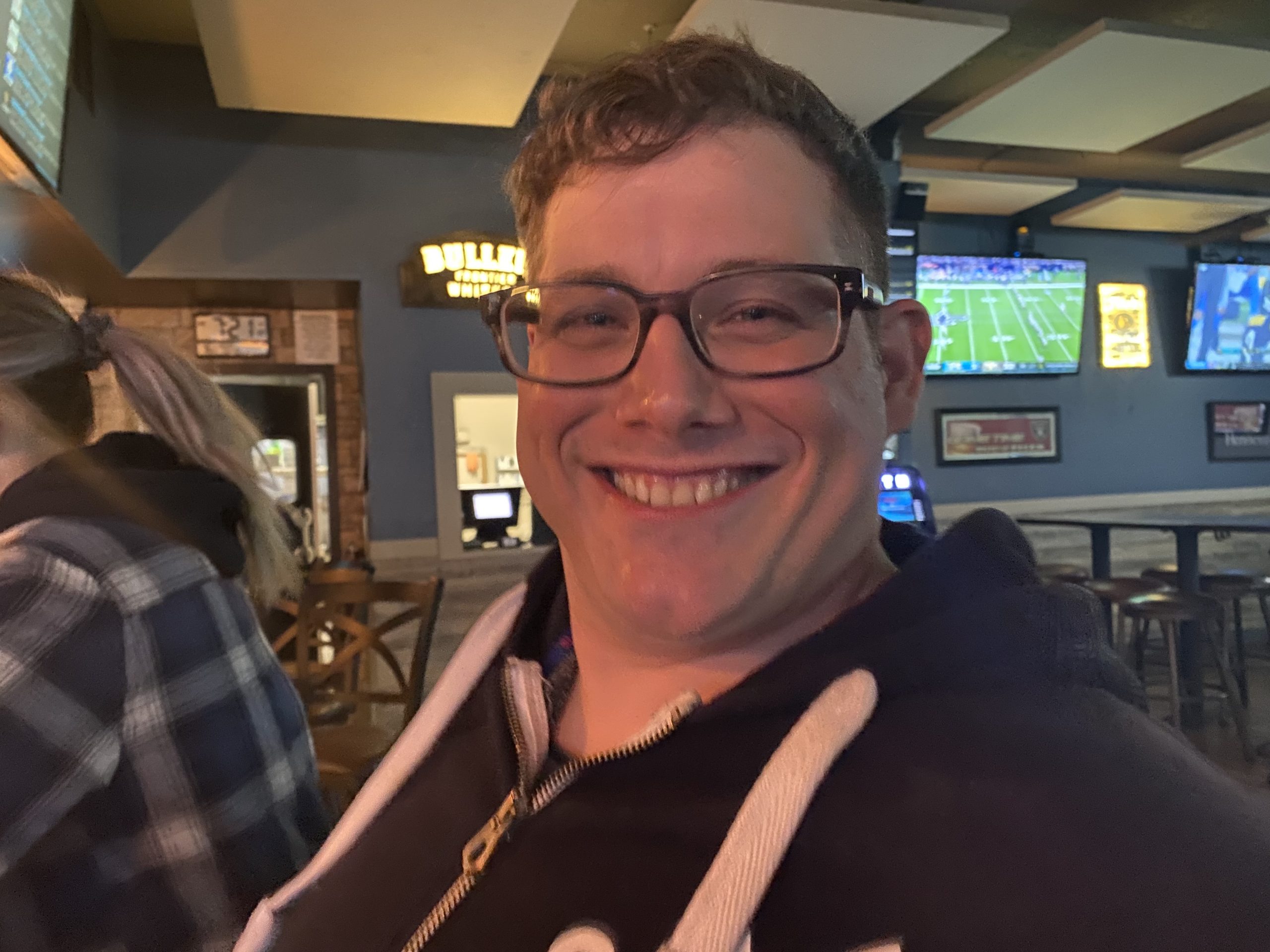 Steven already has us ready to rock, collaborating with our trusty bartender, Ryan, to choose a 9-beer tasting menu. 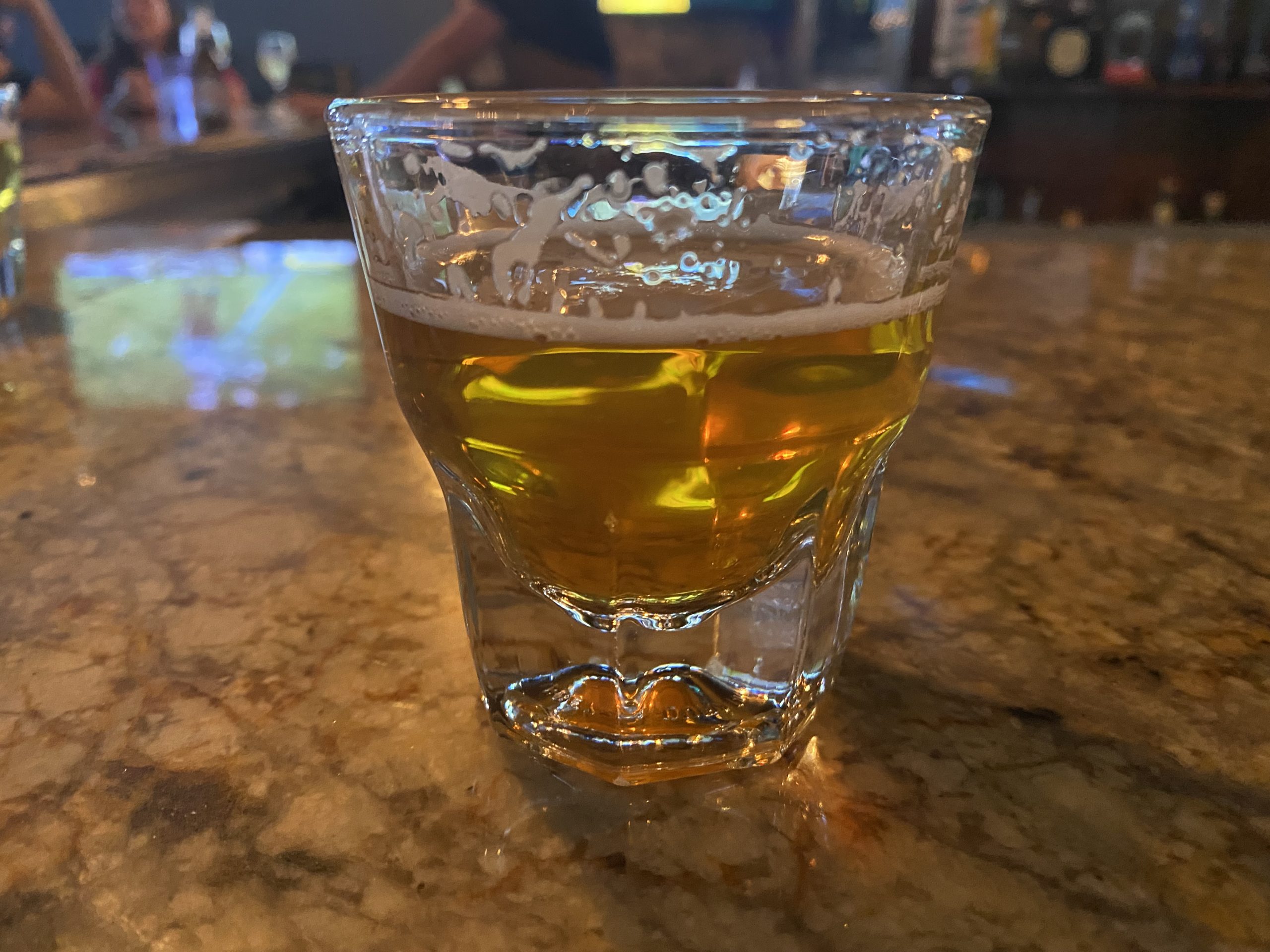 MOUTHFEEL/TASTE: A small bit of bitterness that melds with a juicy, tropical fruit. Nice use of Cascade hops.

I thought it was a nice way to start the evening. You can taste the alcohol, which is a nice touch. Steven liked the even keel, with the bitterness, alcohol, and fruit nicely balanced. Danielle liked it, though she wasn’t as keen on the level of bitterness. Still, this beer was a hit with all of us. 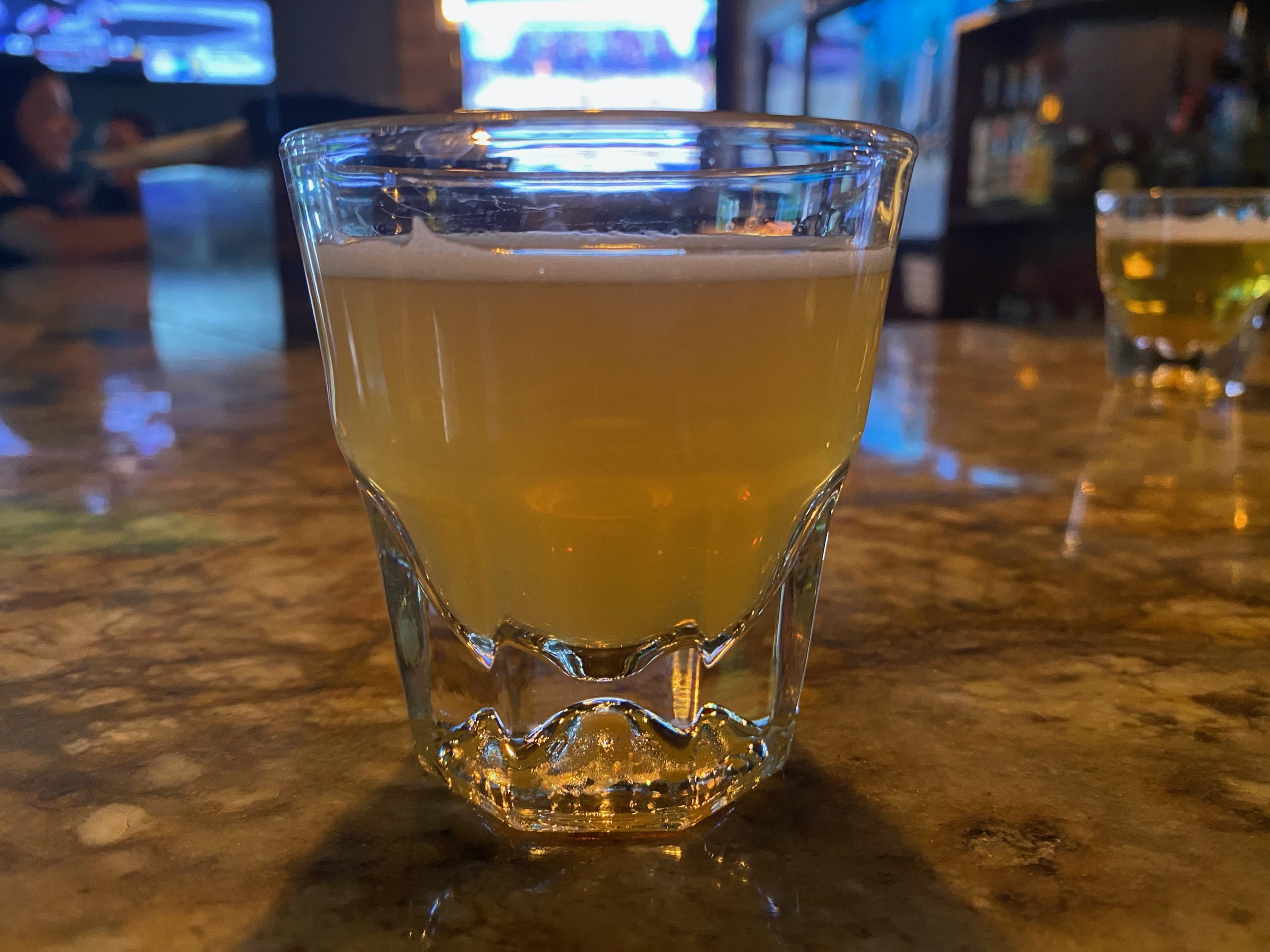 MOUTHFEEL/TASTE: Slightly thick, tastes like a liquid lemon drop, bitter shandy, a bit of Hefe in there as well. Has a small bit of clove spice to it.

There’s a lot of lemon and citrus and you can taste the orange peel. I think there’s too much bitterness to it. Steven agrees for the most part and doesn’t think there’s much depth. It doesn’t taste like an IPA and that’s a problem. Steven says it tastes like a table beer. Danielle says it would go great with something like tacos due to the flavor profiles. Weirdly crushable for a 6.5% ABV. 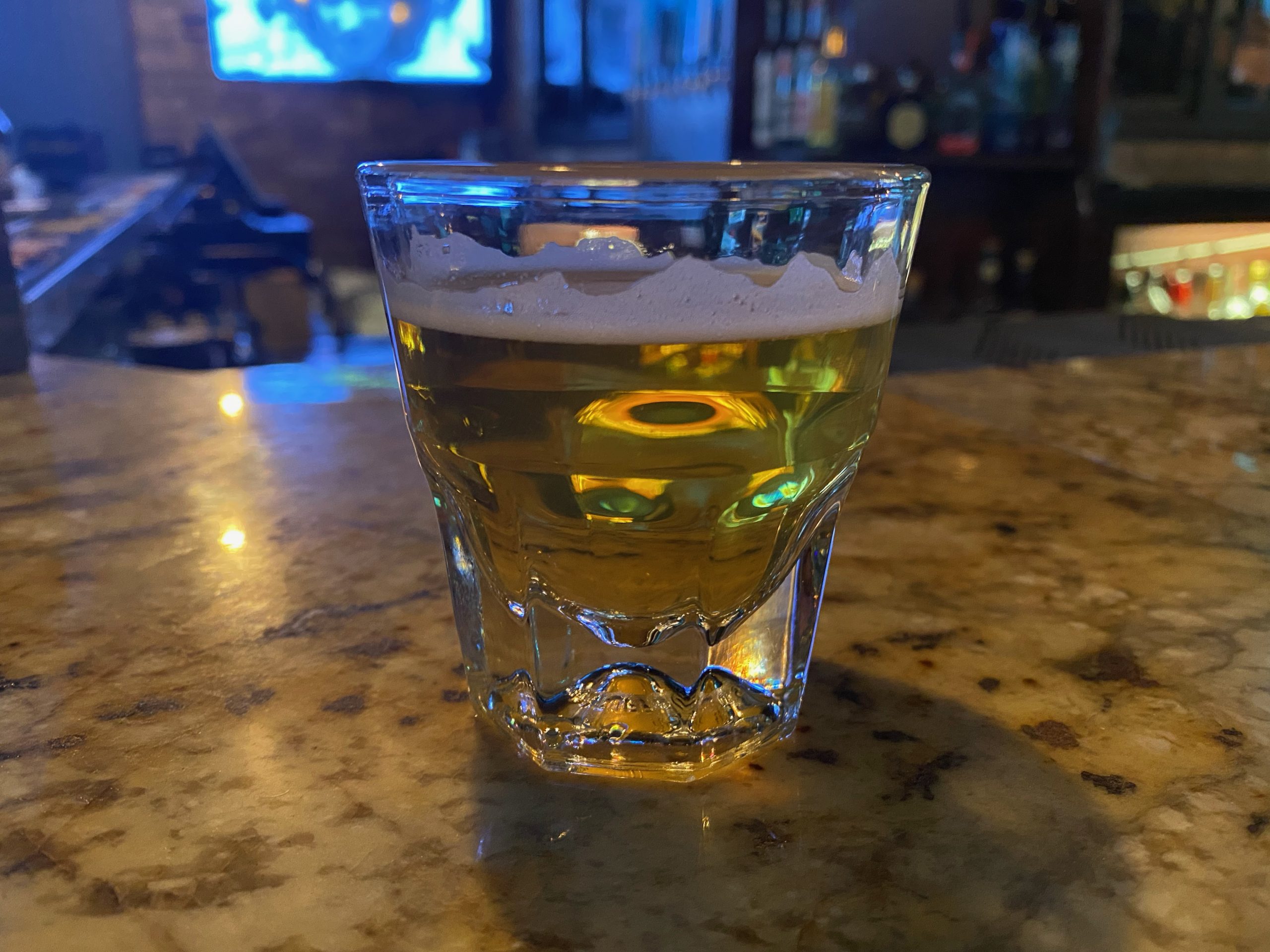 SCENT: There’s a strong pineapple scent to it. A lot of pine, too.

MOUTHFEEL/TASTE: A lot of pineapple and is very reminiscent of a tropical umbrella drink. Some rum flavoring in there as well. Bitterness, but not much.

Stevie’s has begun playing reggae pop from the jukebox. “This is pineapple in the sense that it’s PINE…and APPLE,” says Steven. Danielle agrees and says that the scent attacks you from across the street if somebody opened it. I think it’s just like a tropical shot called the “Surfer on Acid”. You can taste coconut and hops in there. Lots of character. This is a really good West Coast Hazy IPA. Danielle isn’t as impressed with it as Steven or I. 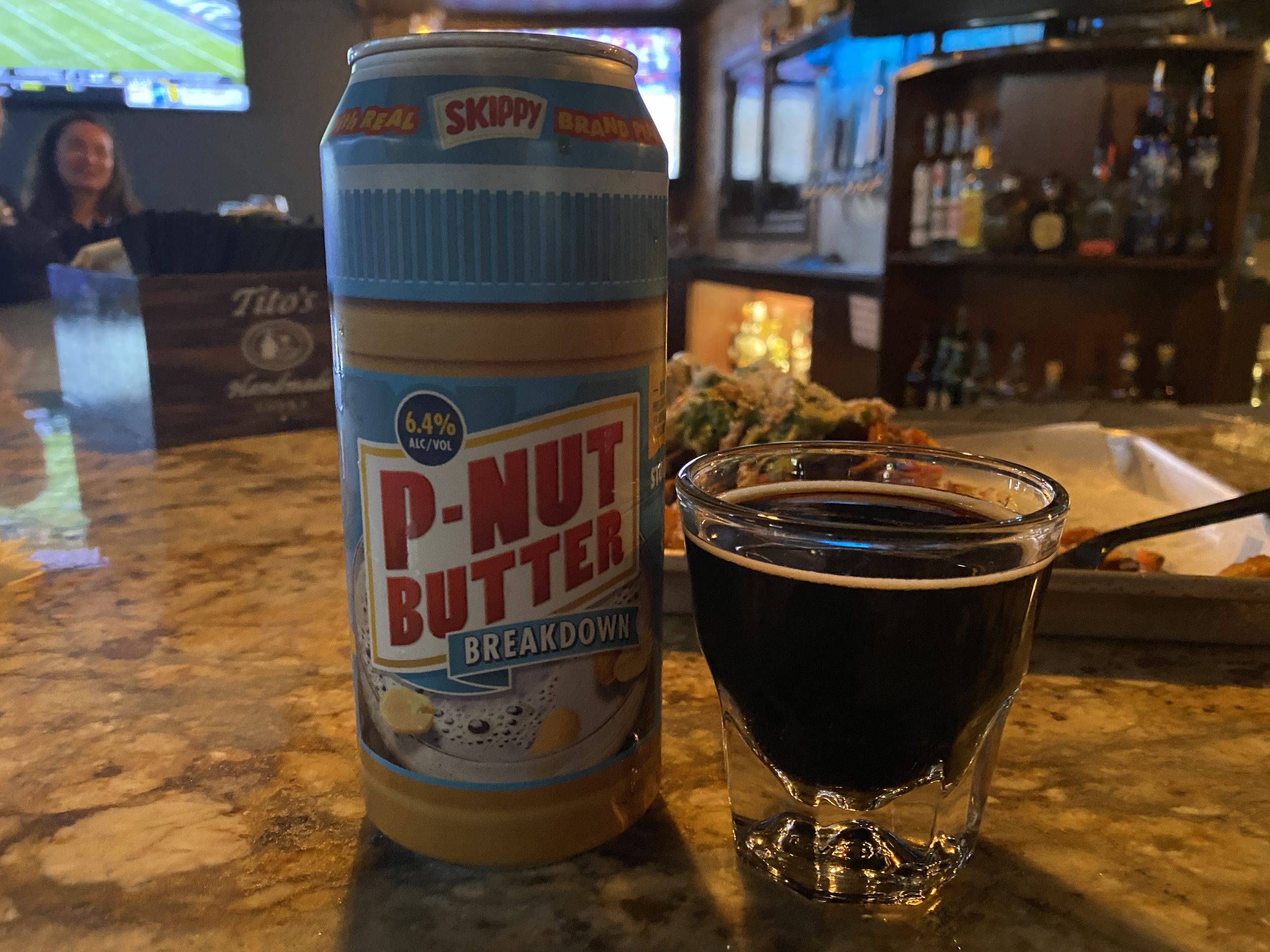 SCENT: Peanut-fucking-butter all day. But what else did you expect.

MOUTHFEEL/TASTE: This is like drinking liquid peanut butter — but with a nice bit of chocolate injected into it. Very clever.

Surprisingly good. It tastes like a liquid Reese’s Peanut Butter Cup. Outstanding mixture of peanut butter and a Stout. There is no alcohol flavoring to be had. “It’s dangerous,” says Steven. Danielle is always a fan of flavored, gimmicky beers and she’s over the moon for this. This was a winner for all of us. 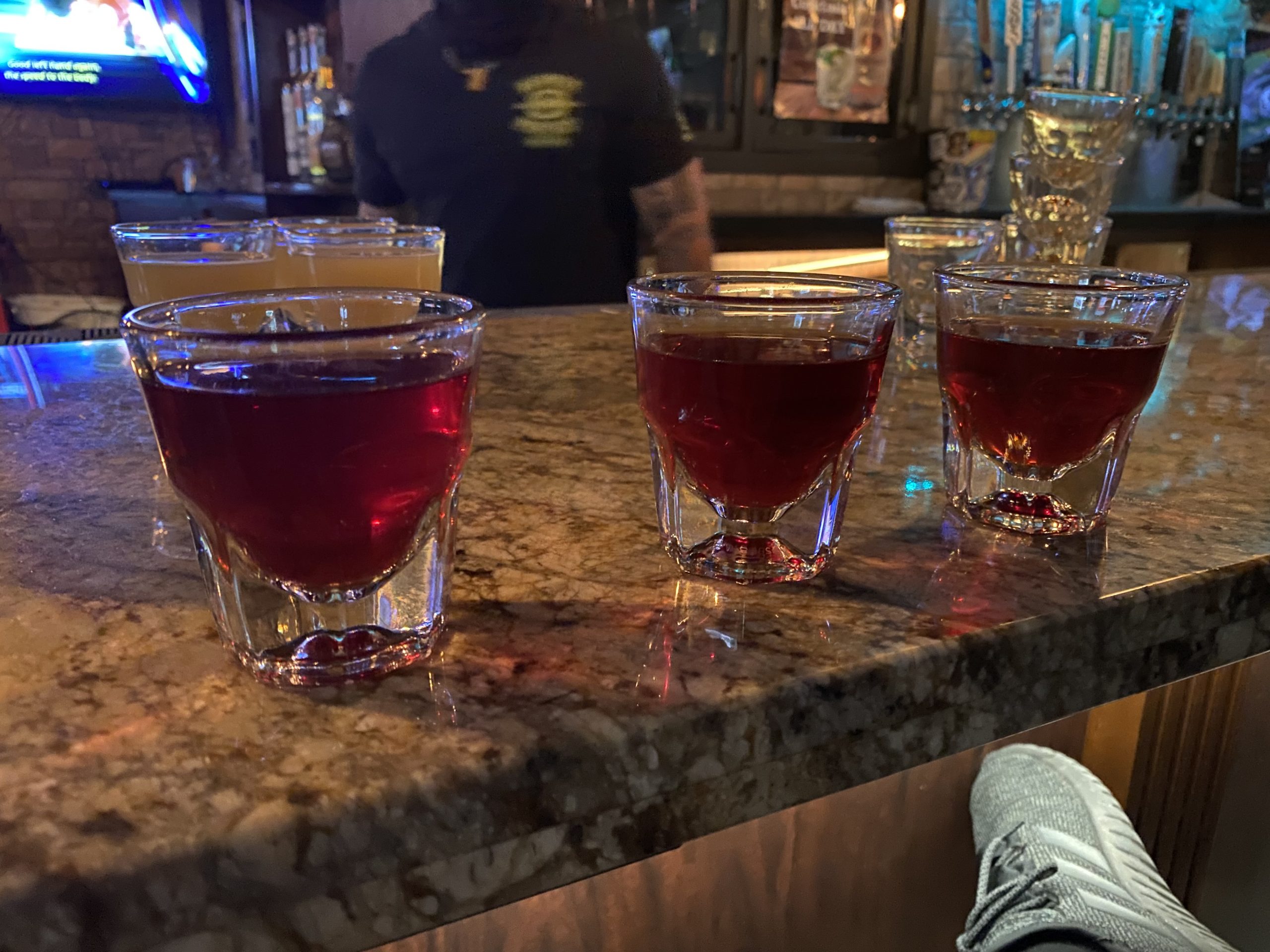 SCENT: You can get a lot of sour on the nose.

MOUTHFEEL/TASTE: Some cherry sour. Thin, comes across like a really fermented wine. But the bitterness just adds to the sourness and the taste just isn’t pleasant.

Jammy taste, according to Steven. Too much bitterness when the sour is already there. Danielle feels like it’s trying to be two different drinks at the same time. Once you taste that vinegared wine taste to it, you just can’t get past it. Steven likes that the flavor just isn’t there — but that the flavor does a good job of masking the alcohol.

It’s at this point that we are joined by the lovely Shay who runs Stevie’s social media campaign! Shay is here to help taste and will also provide us with one her picks. 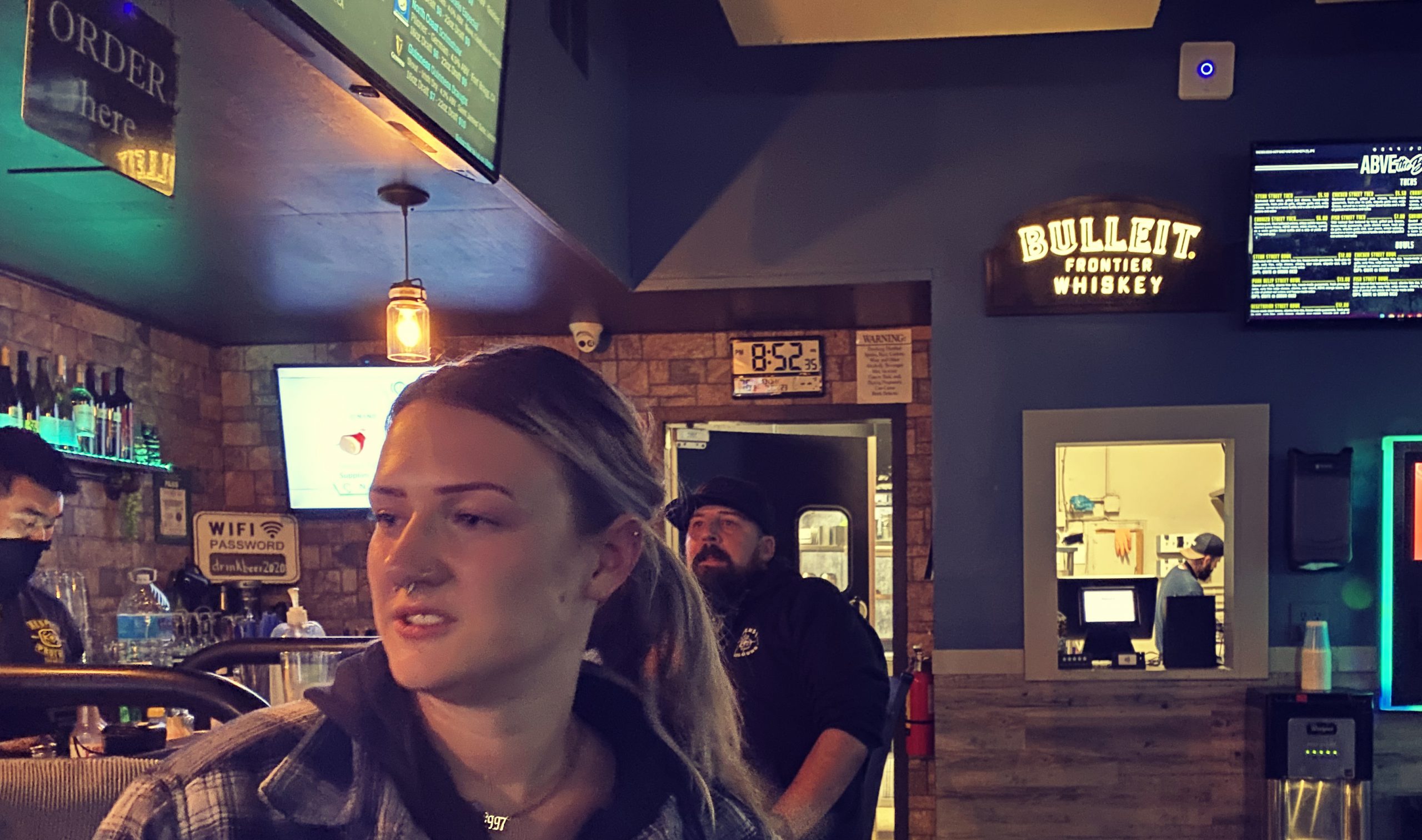 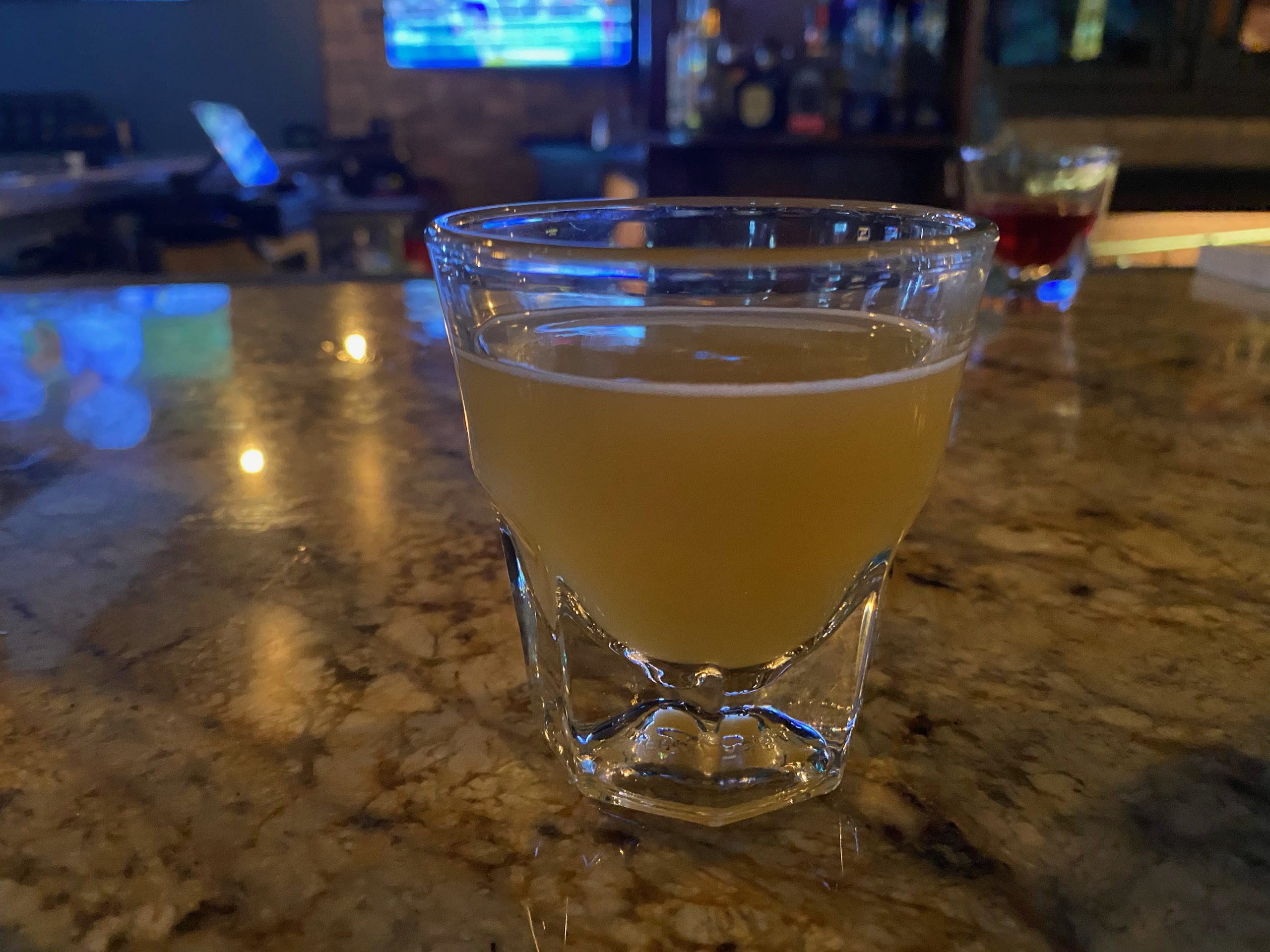 SCENT: Another tropical, juicy scent, so here we go again

MOUTHFEEL/TASTE: This is more like an IPA with that pine resin taste to it. Bitterness on the back end. Citrus up front.

Good juicy hazy IPA. The problem, Steven notes, is that you spend a lot of time trying to find exactly what makes this IPA unique. I am in agreement. I’ve had so many juicy, hazy, tropical IPA’s, they all begin to taste the same. Steven says that he doesn’t think it’s bringing anything new to the table. It reminds Shay of Space Dust IPA — but without the bitterness. Danielle thinks it’s also a bit too ordinary. And on we continue at Stevie’s… 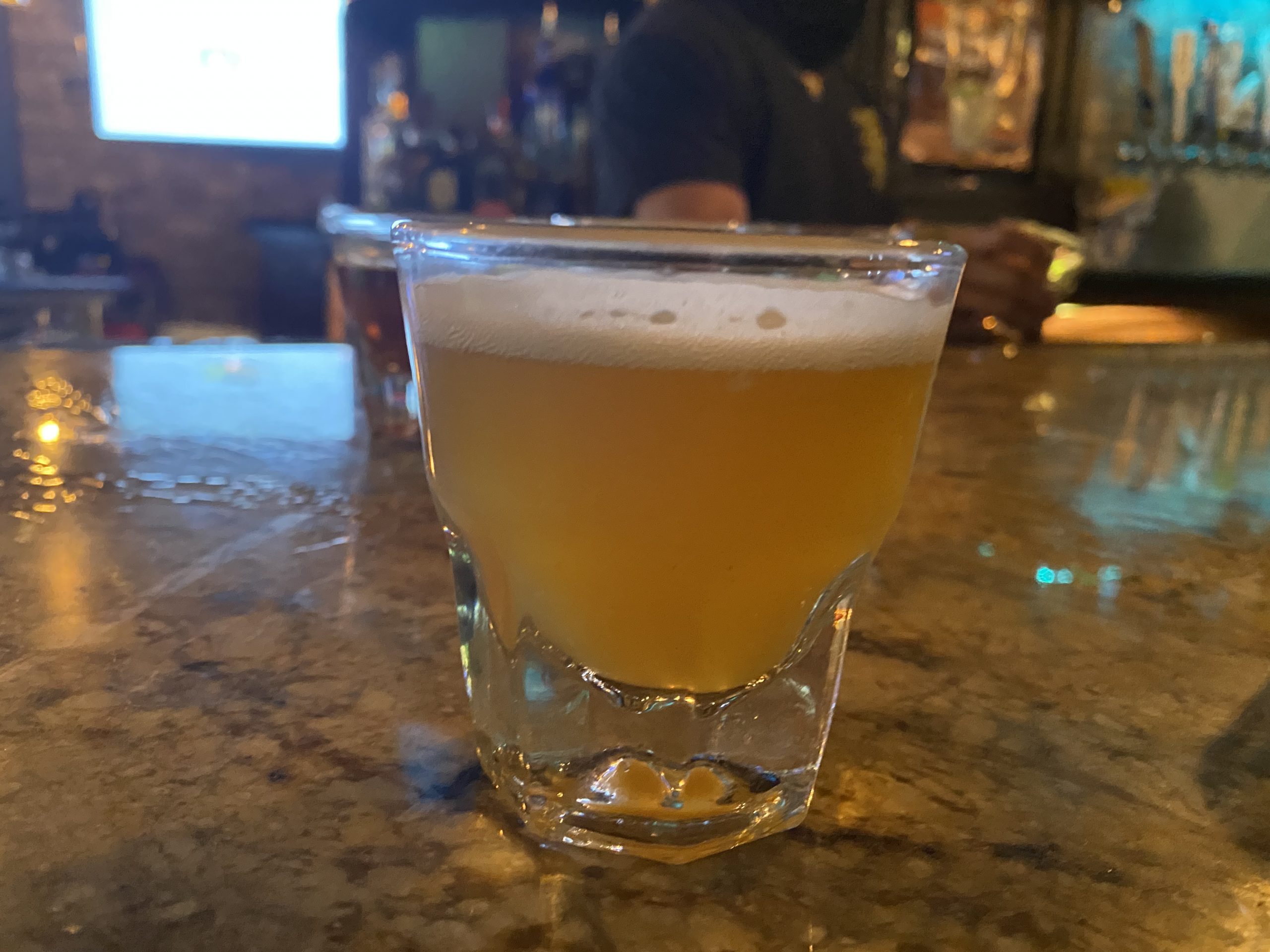 SCENT: This is a Hefe and you can smell it right off the bat: German yeast, sweet flavors, clove…this sucker is ready to be consumed.

This is all Shai. This is her pick. Shai gets a lot of malt. I’ve got a lot of bubble gum and banana. Steven loves the clove and wheat and how good even though it’s unfiltered. Danielle loves the sweetness of it and the nice balance. Steven loves the unfiltered profile AND the flavor together. This might be the beer of the night. I love how much this delivers. This is, possibly, one of the greatest Hefes I’ve ever had. 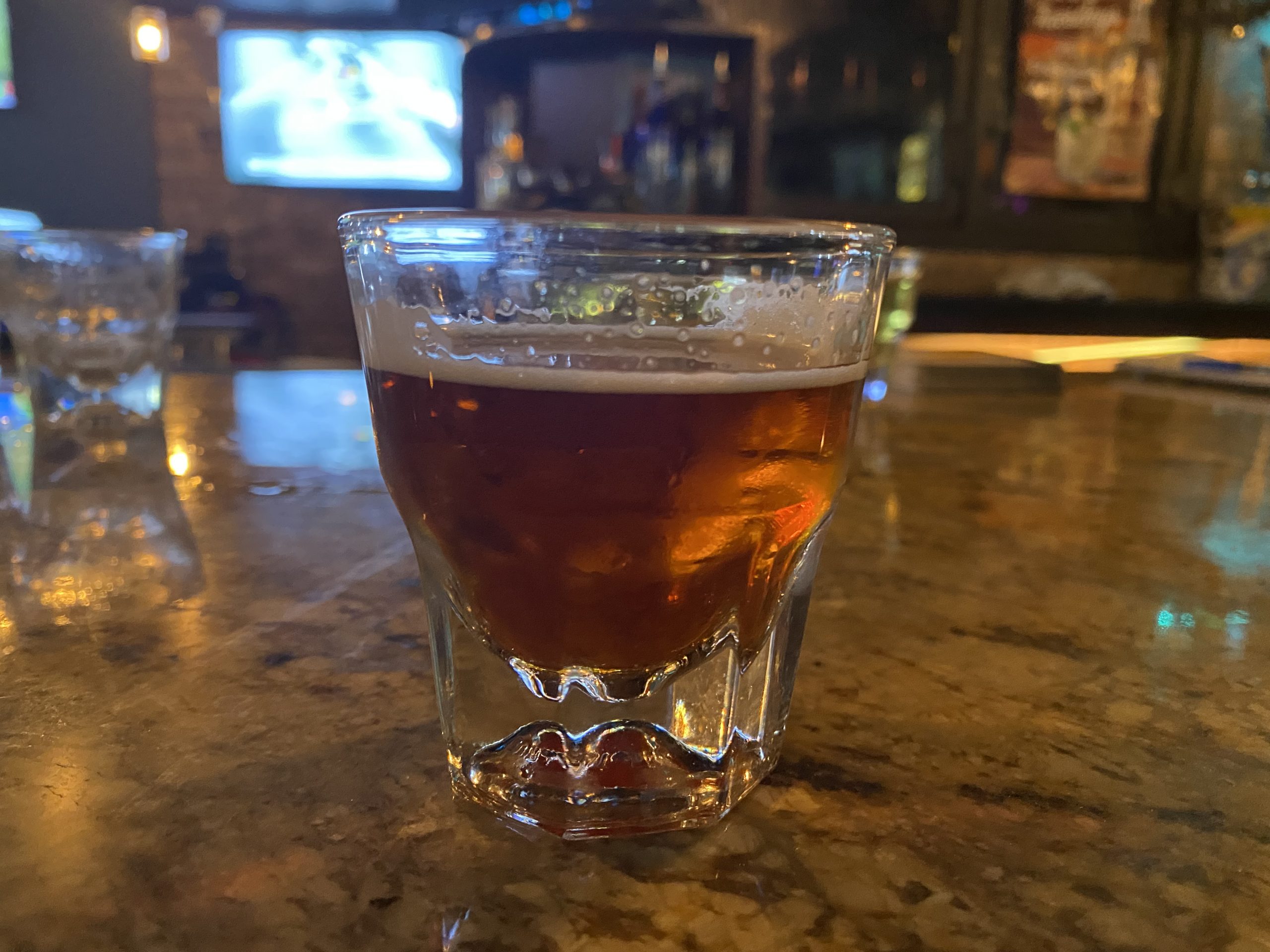 SCENT: Cannot smell anything of note

MOUTHFEEL/TASTE: Thin, basic beer but dry flavor to it, almost like a dry wine.

Basic. A little TOO basic. Earthy, grassy notes to it. Danielle thinks it’s flavorless. Shay agrees. Steven says that it’s like tasting a beer before a brewery adds something to it to give it a personality. Not refreshing at all. Danielle says that it might be a beer you look at it if your supermarket had no beer — but then you’d leave and go to another store to get a different beer because no fucking way. Steven says he can’t even develop a taste for a beer like this. 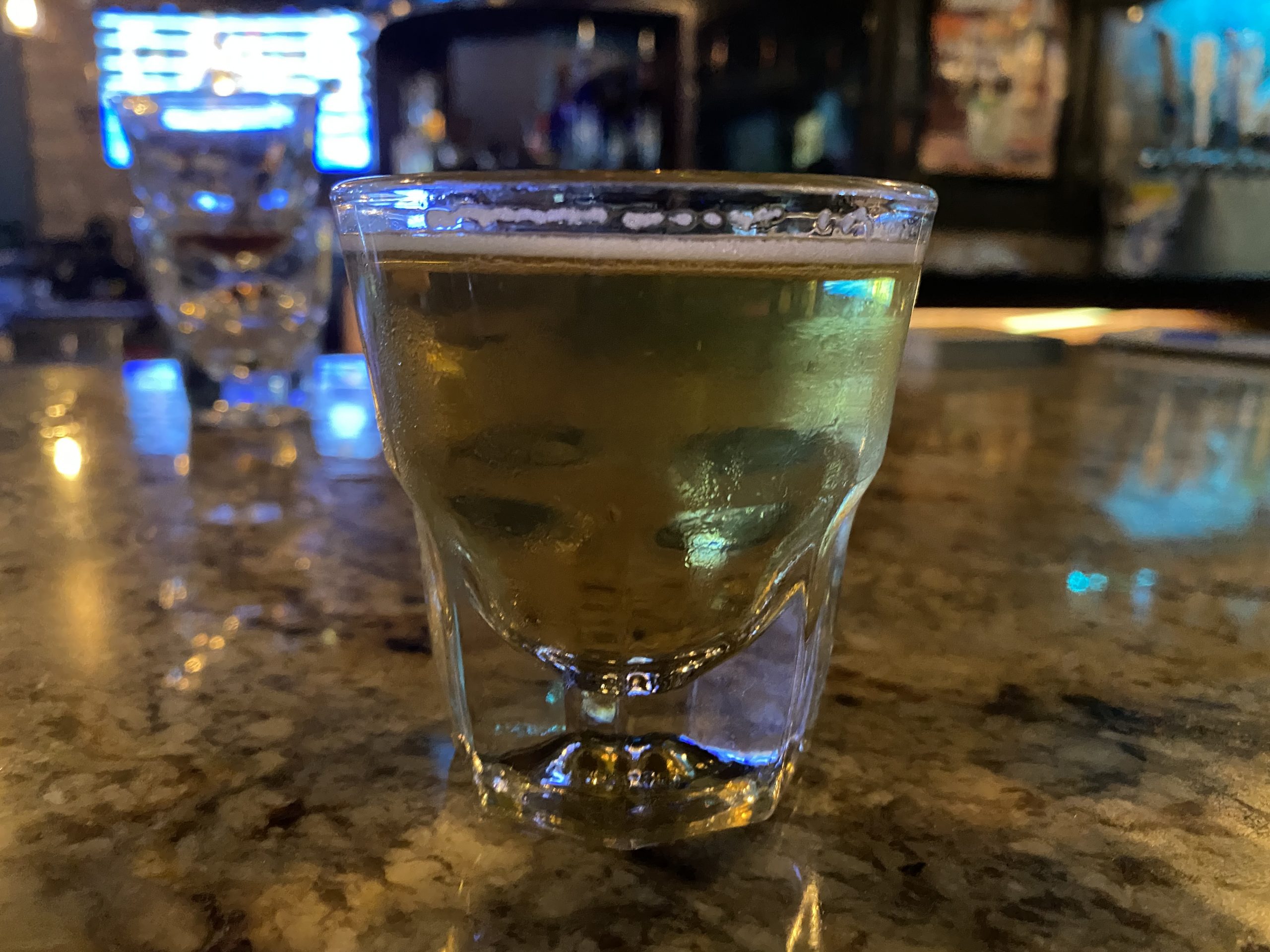 MOUTHFEEL/TASTE: Thin, sugar cane on the end of it. Very dry. Almost Lager-esque.

As Danielle notes, “ANYTHING is going to be better than the last beer!” Too true. Dry and crisp with citrus and apple and a strange sugar cane like finish. Shay says that it’s sweeter than Country Doctor from Original Pattern but the overall flavor profile is similar. Steven is not impressed with the sweetness. Shay loves Pilsners but she prefers Country Doctor to this and says she isn’t crazy about the aftertaste.

This was a great night with a variety of flavors. It was also unpredictable as you wouldn’t expect a Hefeweizen to be our beer of the night, but here we are. The P-Nut Butter Breakdown was also a surprise winner here. Special thanks to Steven, Shai, and Ryan! You can hear our final thoughts here — and visit Stevie’s Bar & Grill when you’re in town!