It is Friday night and we have another pack from Stone Brewing to review!

This week, we commemorate the first week of December with Stone Brewing’s “12 Days of IPA” mixed pack which features 12 different IPA flavors from the company. Here, you’re going to see quite a few flavors we’ve already documented plus a few new ones we haven’t had yet.

So, pour yourself your favorite alcoholic or non-alcoholic beverage, sit down, kick back, and chill with us while we delve into the first night tasting “The 12 Days of IPA” from Stone Brewing! 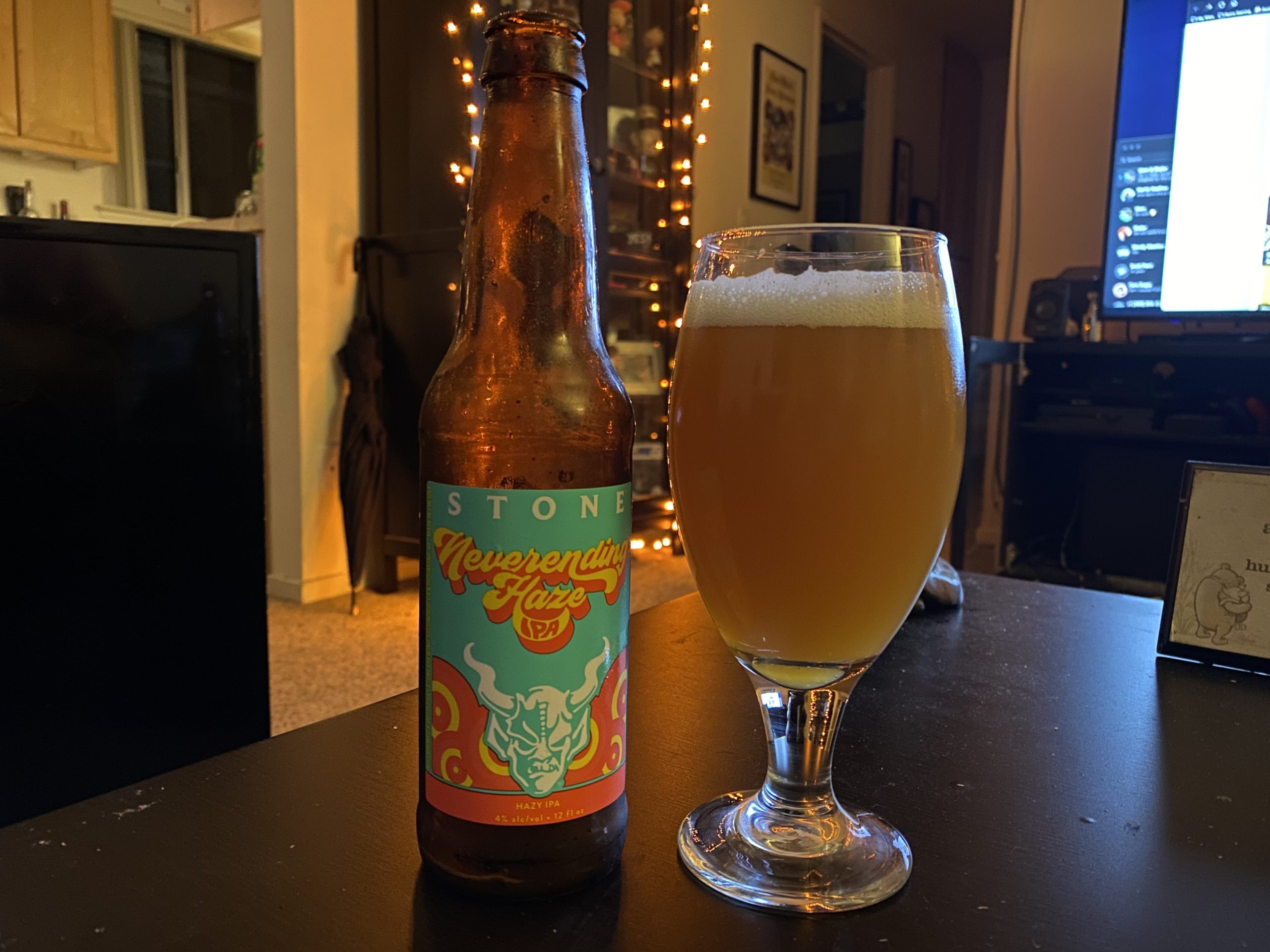 MOUTHFEEL/TASTE: Thin mouthfeel with grapefruit and orange peel on the front end and that trademark Stone IPA bite on the backend for even more bitterness.

FINAL REFLECTIONS: No, you’re not tripping balls. We did this a couple weeks back. It’s just part of the new pack. You’re gonna see this three more times. This is a nice, light, refreshing IPA that doesn’t assault the taster. It has some nice front-end flavor and good carbonation with just enough of that bite that all Stone beers seem to have. This is an IPA for people who look at the word “IPA” and cringe. 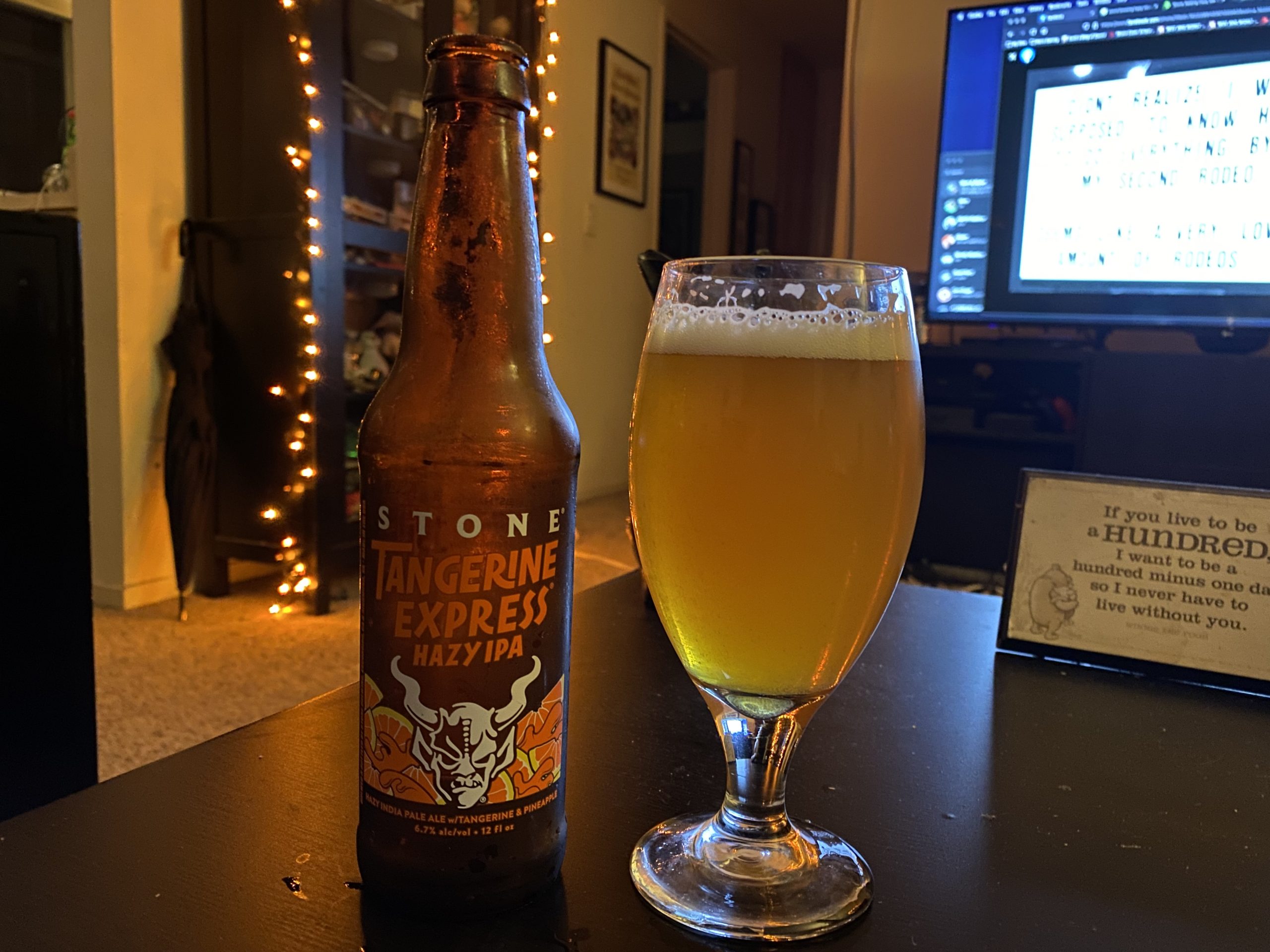 LOOK: Darker gold and somewhat hazy — though not like the others.

SCENT: Orange all the way…tangerine peel, what did you expect?

MOUTHFEEL/TASTE: Somewhat thick mouthfeel. You have a lot of tangerine and citrus plus bitter hops and alcohol. Very refreshing.

FINAL REFLECTIONS: This is the third time we’ve had this beer. I have grown to really enjoy it. Nice, crisp, refreshing orange peel and hops combo with a good amount of bitterness. Danielle is not so enthused — though she says that it’s enjoyable enough. This doesn’t really work as a fall-style beer, however. 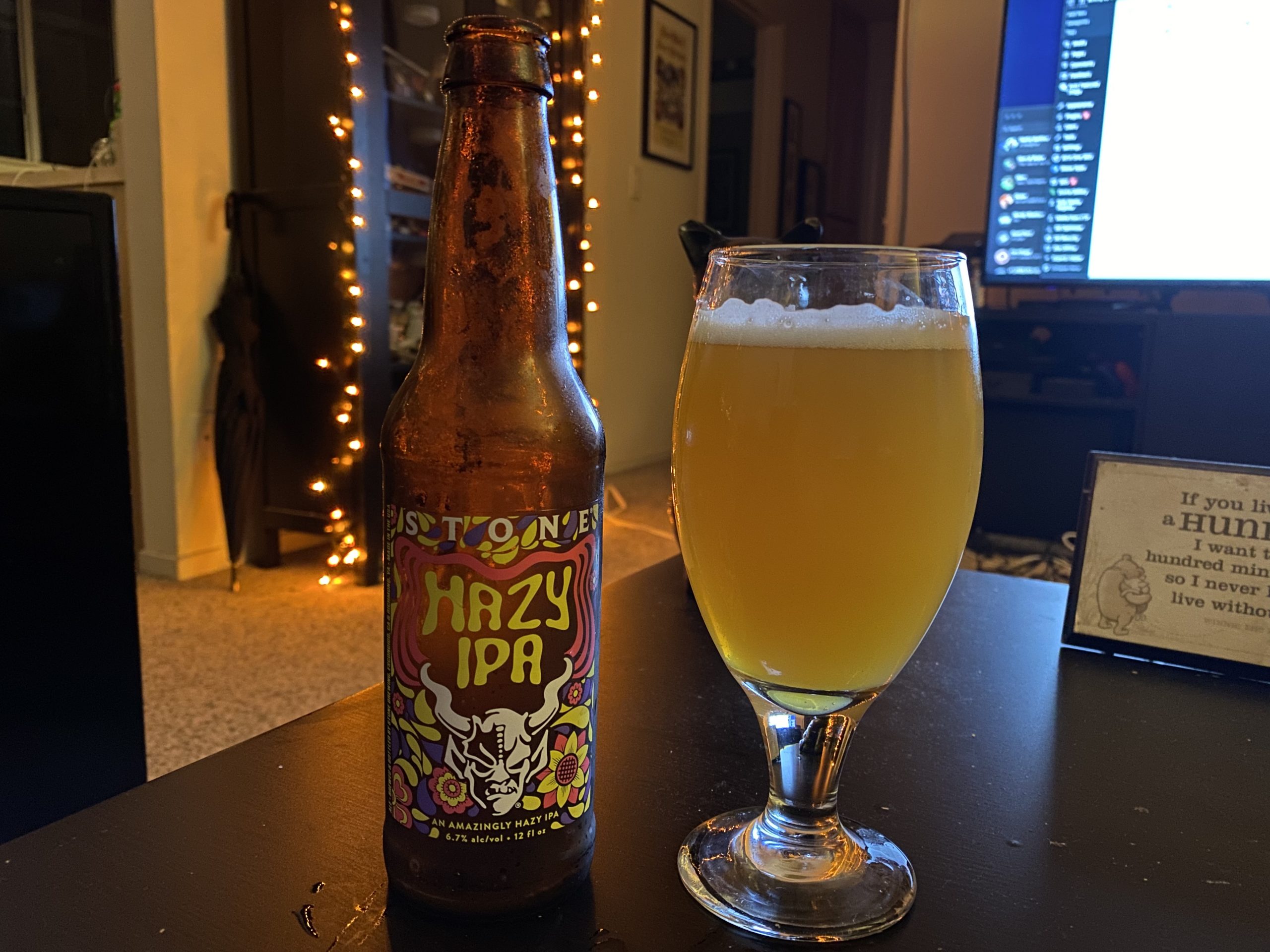 MOUTHFEEL/TASTE: Thicker mouthfeel than the last beer. Tropical sweet to it, cream there as well. Heavy pineapple-based flavor here. Bitterness on the back end. Refreshing and more of a summer beer than a fall beer.

FINAL REFLECTIONS: Our second time through this is just as good as the first. I really liked this. This is a friendly IPA which greets your tongue with a nice mango/pina colada flavoring, offset by a nice, mild IPA bite on the finish. This is an amazing beer and one which I found to be better than the last. Danielle changed her rating and says that she really likes it. 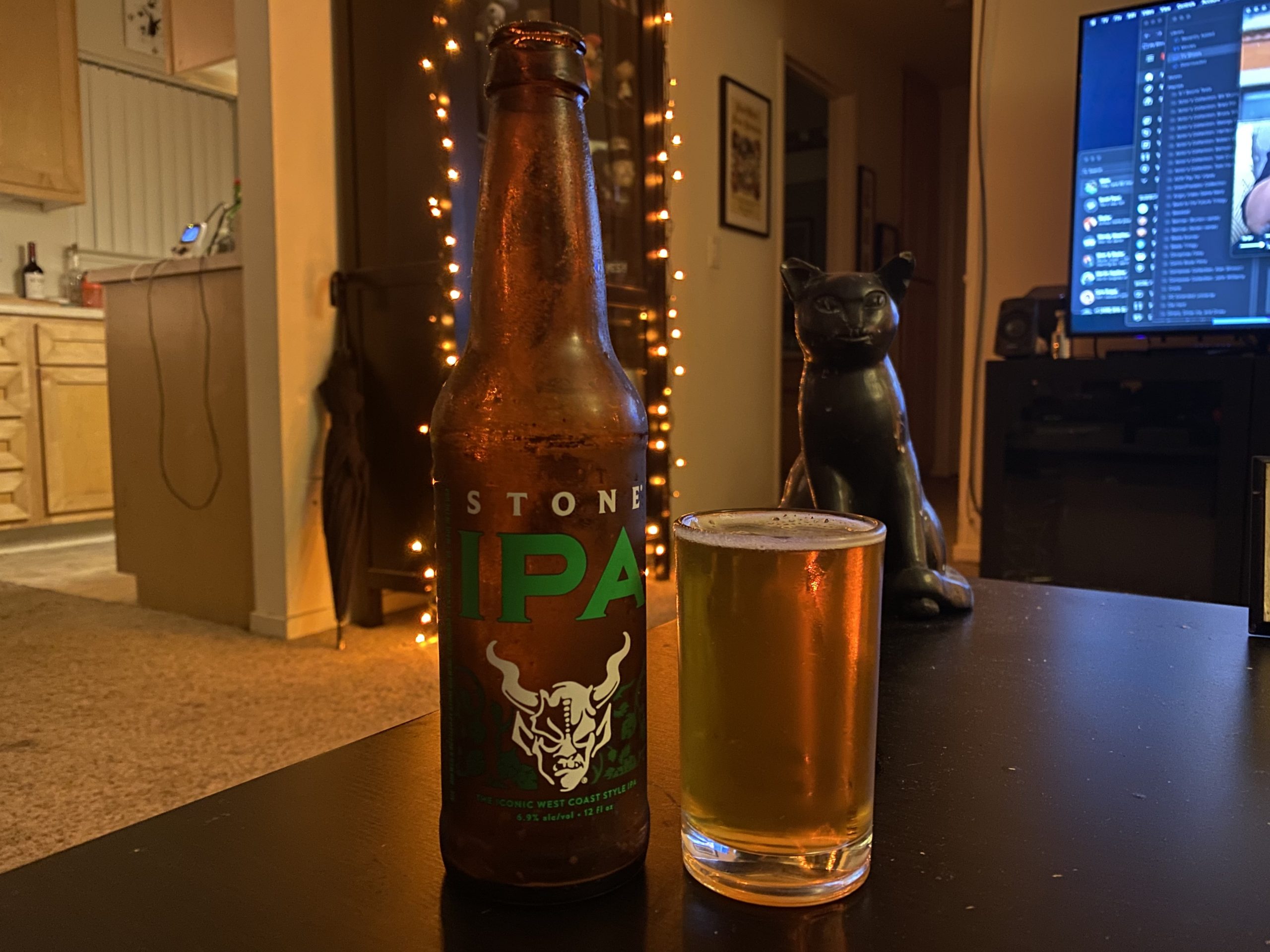 MOUTHFEEL/TASTE: Thin mouthfeel. Pine and hops all over the place with a slight malt taste. Very bitter.

FINAL REFLECTIONS: This is a straight-up, pure IPA with no gimmicks. I like this IPA but I’ve definitely had better. The issue is the extreme bitterness. It overpowers everything else in the beer. It’s not very well balanced. 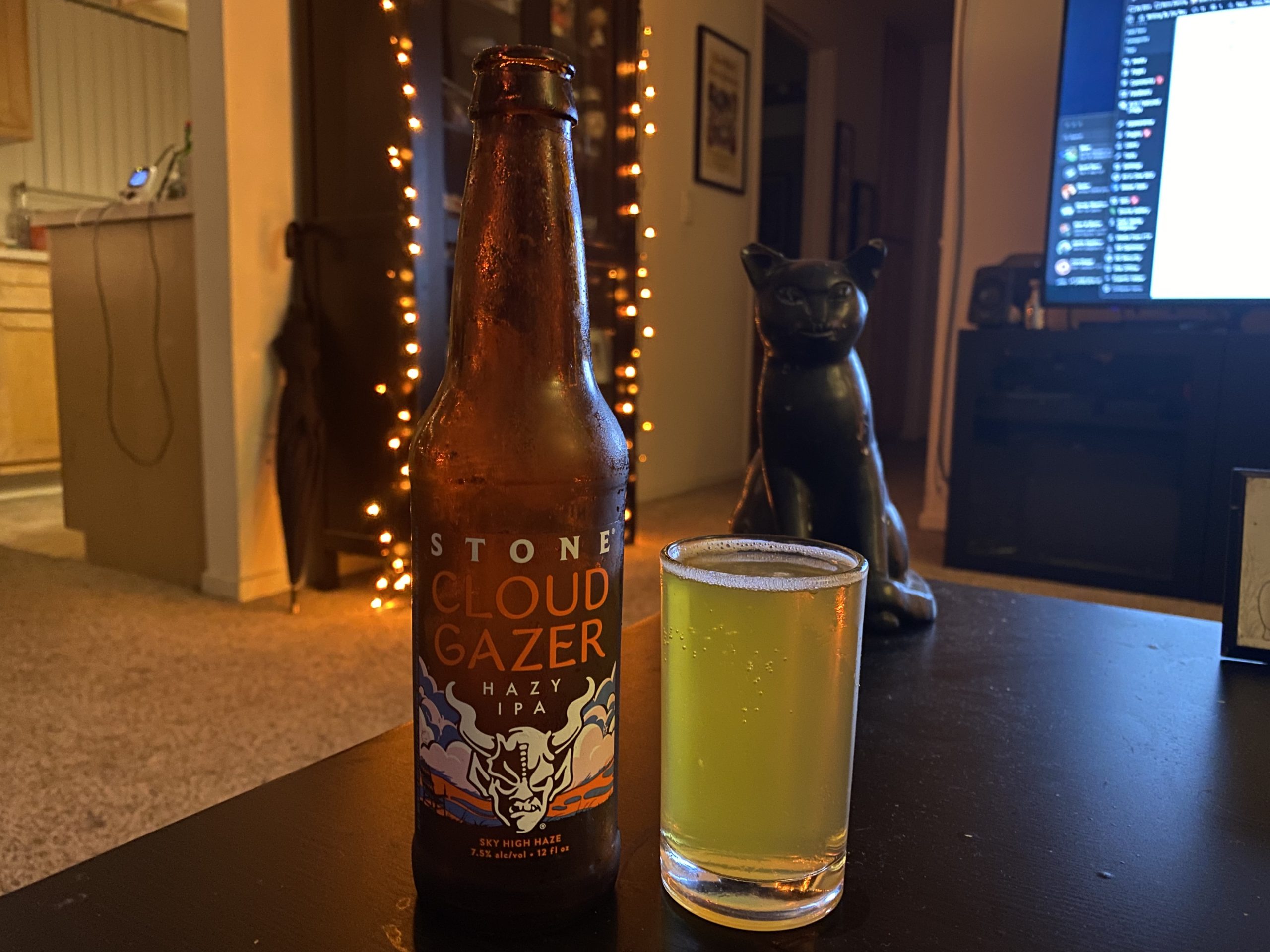 SCENT: Tropical fruit all over the place

FINAL REFLECTIONS: A good IPA with little bitterness to it. The issue is that Stone has made more than a few of these and this beer is much like all their other tropical IPA’s only with less complexity and conviction. That said, it’s still very drinkable — but just passable. 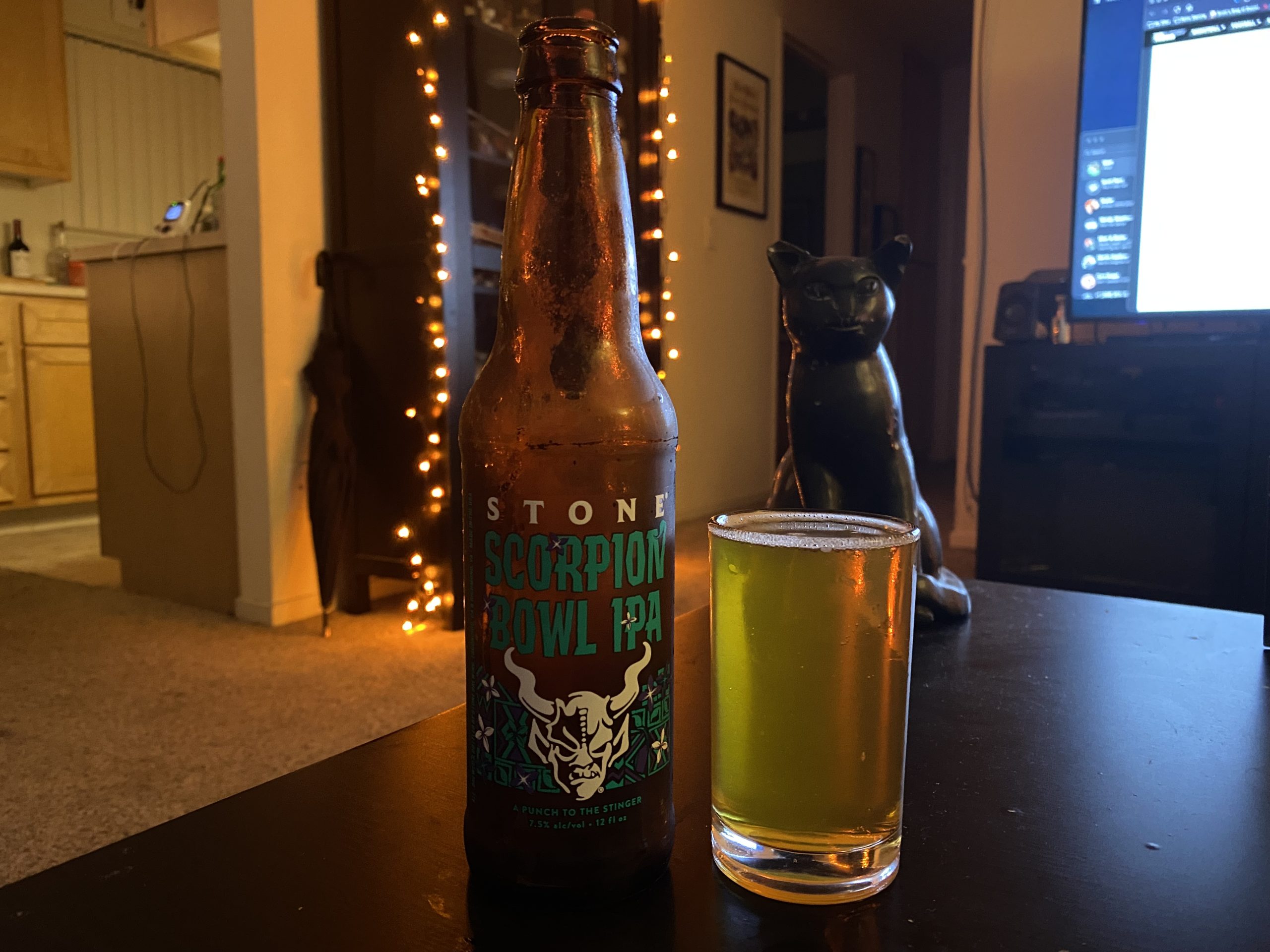 SCENT: Fruit on the nose, same as the last beer

MOUTHFEEL/TASTE: You can actually taste the booze once you get past the fruit juice element of it. There IS bitterness but it’s more balanced than the Vengeful Spirit. Mouthfeel is about the same as the others in this pack. Lots of carbonation with an excellent finish.

FINAL REFLECTIONS: Very nice fruit/hops combo. This was the big star of Stone Brewing’s Tiki Escape pack of the last couple years and it still shines here. The combo of tropical fruit, bitter hops, and alcohol is just brilliant. Another winner from Stone.

FINAL THOUGHTS: The first night of “12 Days of IPA” mix pack from Stone Brewing was solid, if not totally predictable. We look forward to tomorrow night’s selection!