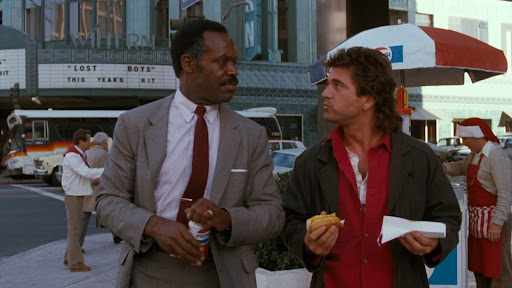 DIRECTOR: Richard Donner, who directed all four of the Lethal Weapon films, as well as the underrated Maverick, and the superhero classic, 1978’s Superman — just to name a few. He was an incredible action director before he died earlier this year.

WHAT IS IT?: Lethal Weapon is the first leg in my unofficial “Shane Black Christmas Quadrilogy”. We’ve talked about Black before. He wrote The Monster Squad as well as the most recent Predator film. His scripts are free-wheeling and fun and this film is no exception.

THE PLOT: Danny Glover plays Detective Roger Murtaugh, an L.A. cop with a nice house, a beautiful family and an uncomplicated, normal life. Enter Martin Riggs (Mel Gibson), another Los Angeles cop, and former U.S. Special Forces op, who is barely holding himself together following the untimely death of his wife. Contrary to Murtaugh, Riggs lives in a tiny trailer near the coast, abuses alcohol, and is borderline suicidal, having developed a care-free, nothing-to-lose attitude toward his job, hoping that that he’ll be killed in the line of duty in order to end his suffering.

After the two are partnered together, they clash due to Riggs’ reckless nature while on the job. But after Murtaugh attempts to bridge the gap between them by inviting Riggs into his home to meet his family, of which Riggs eventually becomes a surrogate member, a bond develops between the two men. This becomes essential when a cartel the two investigate decide to retaliate against the two men, making things intensely personal, allowing Murtaugh to realize that Riggs isn’t just a good cop, but one of the most deadly weapons anyone could wish for in a crisis.

WHAT DID CRITICS THINK?: Critics praised the quality action set pieces and atmosphere and loved the chemistry between Danny Glover and Mel Gibson. Critic Roger Ebert gave the film four out of four stars and said that “Richard Donner tops himself.”
WHAT DID I THINK?: It’s a solid film with a bit of a neo-noir, rainy atmosphere, mixing great action with sharp comedy. Glover and Gibson have unbelievable chemistry as they banter back and forth, ribbing each other constantly in the most witty fashion, a trademark in most of Black’s scripts and films. The supporting cast is outstanding, featuring singer/actress Darlene Love as Murtaugh’s wife Trish and also features a great villain in Gary Busey’s “Mr. Joshua” and veteran actor Mitchell Ryan as his boss, Mr. McAllister.

The reason I watch this film at Christmas is because Black has an obsession with Christmas, setting at least four of his films around or during the holiday. No, this movie isn’t a “Christmas film” in the traditional sense but it’s definitely there in the background. We’ll get to three more of his movies as we go along.