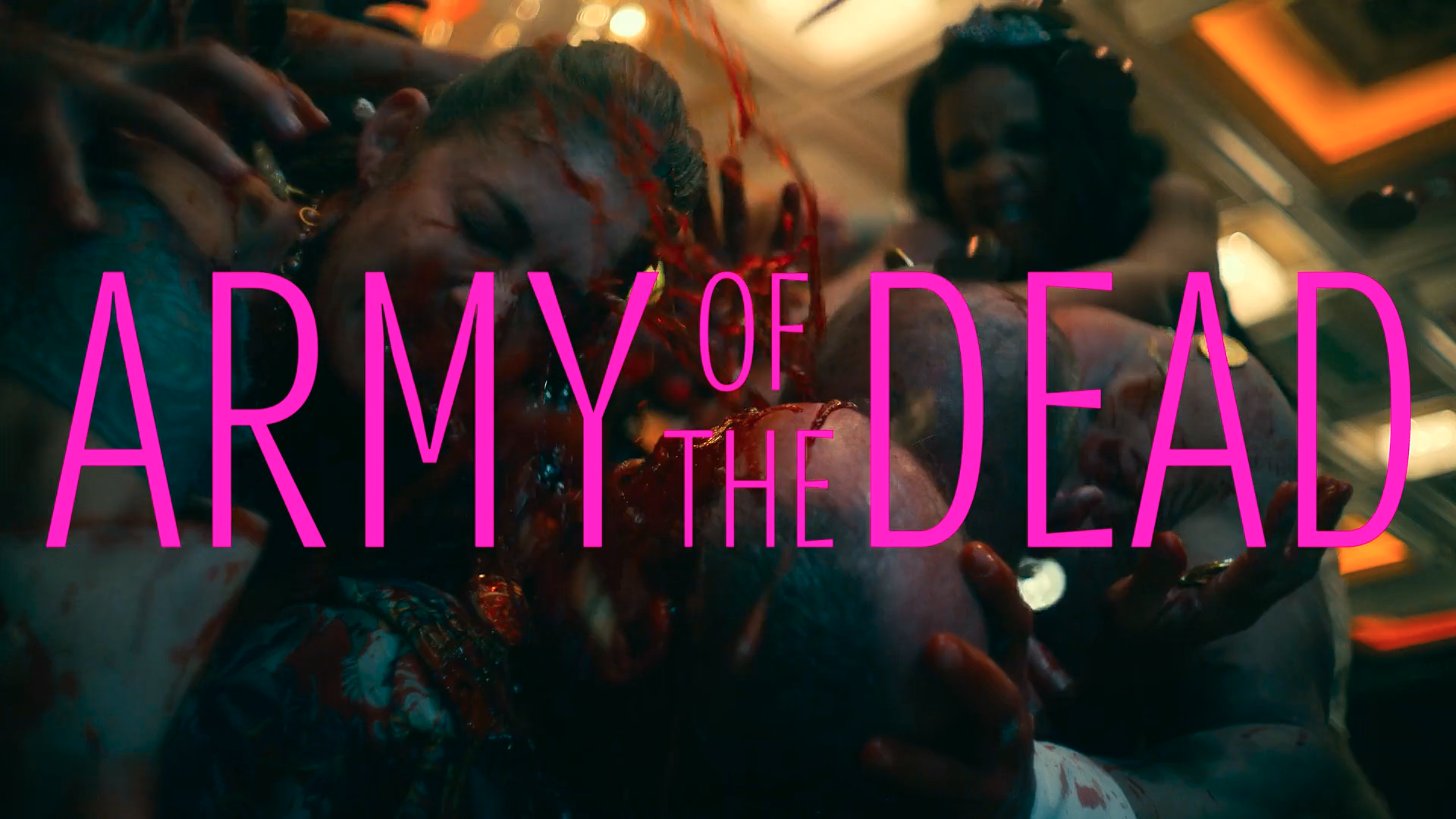 WHAT IS IT?: Army of the Dead is an insane Las Vegas heist film — with zombies.

THE PLOT: Six years have passed since Las Vegas fell to a massive zombie attack and infestation. The city has been walled off from the rest of the country and the planet. Nobody is allowed inside and the airspace above it is considered a “no-fly zone”. After the United States government votes to destroy Las Vegas in a tactical nuclear strike, casino owner Bly Tanaka (Hiroyuki Sanada) recruits Scott Ward (Dave Bautista), a former resident of Vegas and a military mercenary, to form a team to go into the restricted former city in order to recover $200 million dollars from his casino’s vault before the bomb hits.

At first, the task seems relatively simple since the zombies are slow, easy targets — but things become complicated when the team discovers a new “alpha” breed of the creatures which seem to have the intelligence and speed of a normal human being — and they rule a portion of the city with an iron fist. Additionally, one of Tanaka’s men is there for other reasons unrelated to the vault — and that reason endangers the entire team.

WHAT DID I THINK?: I’ve had 24 hours to fully digest Army of the Dead.

It’s no secret that, with the exception of Man of Steel, I detest Zack Snyder.

This is the director who gave us the god-awful four-hour turd that was his cut of Justice League. He’s also done the slow-mo leather/sandal/meathead-fest, 300, the insipid and sexist Sucker Punch, the god-awful Watchmen, and the inexcusably bad Batman v. Superman: Dawn of Justice.

But, hell, I gave this movie a chance because I loved the premise and Dave Bautista looked like he was in his element — and Snyder had already taken a trip through the zombie genre with his big time debut, the remake of Dawn of the Dead. 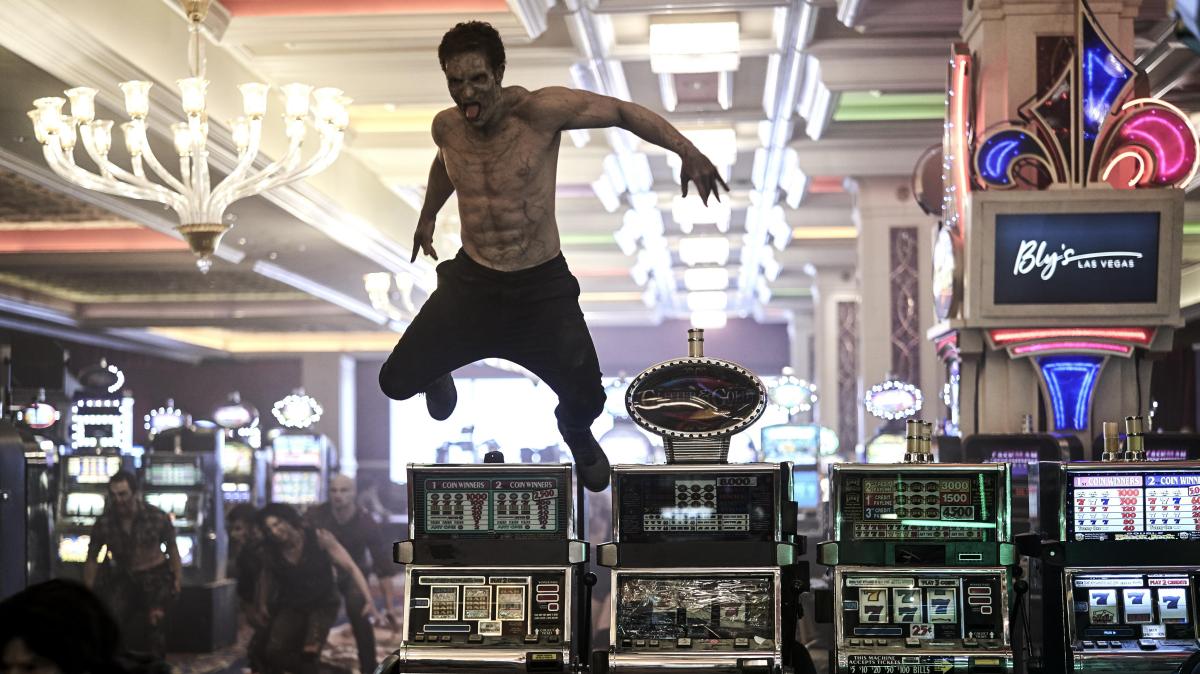 Off the bat, Army of the Dead is extremely hard to take due to its insistence on showing you the most excessive violence you’ve ever seen in a modern action/horror film.

After a great opening involving the escape of an “alpha” zombie (more on that in a few), the film’s opening credits is five minutes of Zack Snyder’s violent masochistic fantasies come to life (fittingly set to Richard Cheese crooning a snazzy cover of “Viva Las Vegas”, just like his cover of “Down With the Sickness” in Dawn of the Dead), emphatically declaring “I don’t give a fuck if you don’t like 800 gallons of blood spewing out of a human body while zombies chew on it, you can turn this fucker off.”

From there, the film tries to go Ocean’s Eleven on us by introducing all the people Scott Ward wants to hire to help rip off the casino vault. And this is just fine with me. I like this. Ward building his team sets the mood for the rest of the film — which is all but destroyed the moment the team enters Vegas because Snyder returns to giving us nightmarish zombies, exploding heads, and the downbeat setting of an apocalyptic city landscape. Gone is the witty dialogue, the care-free feel, and the fun (but wholly unbelievable) premise the film promised us.

I will NEVER understand why Snyder insists on sucking all the fun out of everything he does — and this isn’t the first time. He always does this in EVERY…FREAKIN’…MOVIE from Dawn of the Dead all the way to Army of the Dead.

I am a huge fan of heist flicks. I love Ocean’s Eleven, I love Mamet’s Heist, Mann’s Heat is a classic, Bound is totally amazing…and how can anyone look at the premise of this film and say “There’s no way this can be fun”?

Snyder accomplishes this with such loving grace, Michael Bay would be envious.

And, by the time the team steps foot in Dead Vegas, the film still has 2 1/2 hours of life-sucking hell left.

Oh! I forgot to mention that…the movie sucks up just over 3 hours of your time and there’s no reason for this whatsoever. 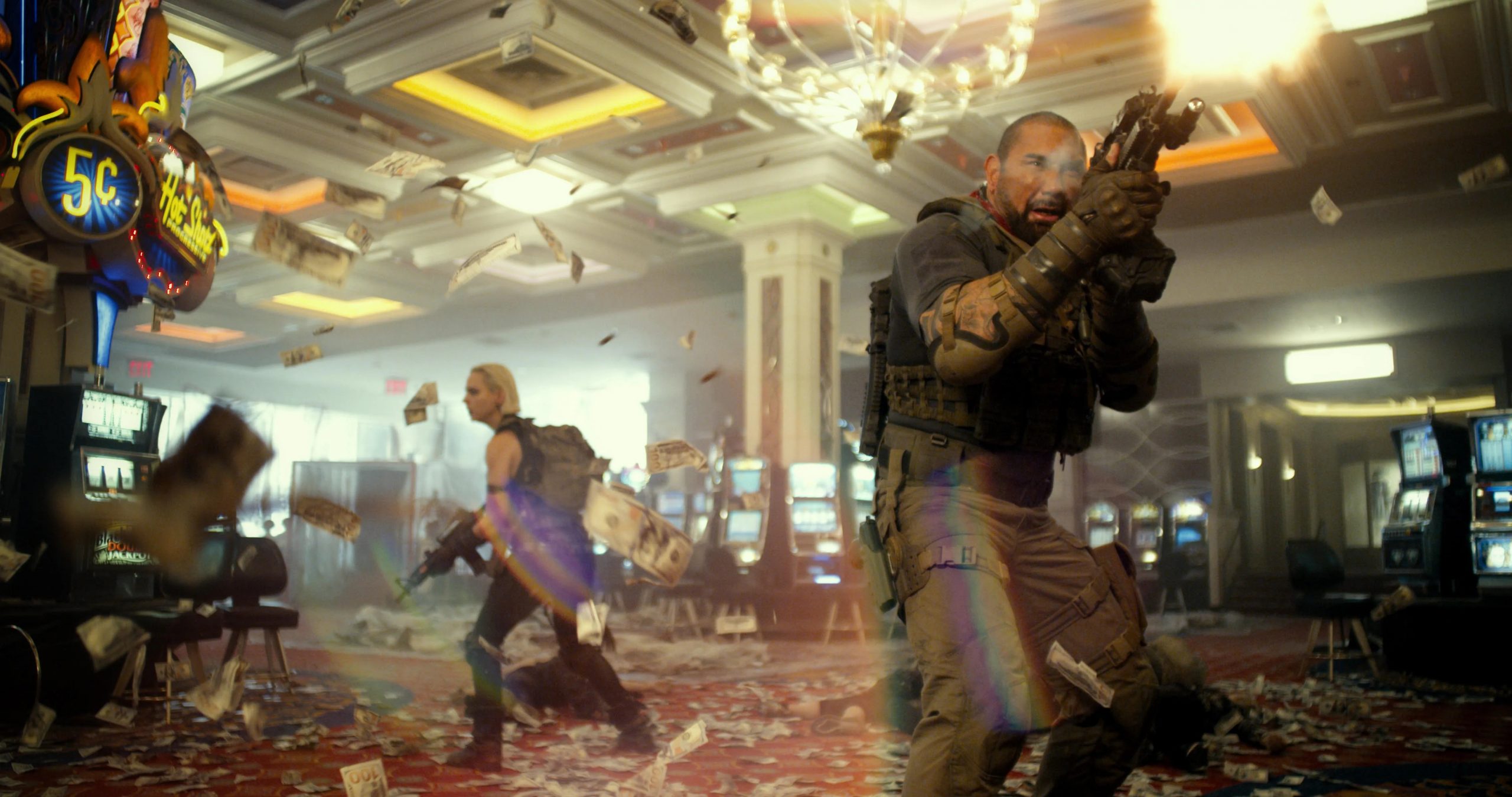 It’s assumed that the Alphas are the result of a government experiment gone wrong (the zombie at the beginning) but there isn’t anything to really confirm this despite the fact that Lilly (Nora Arnezeder) only exists for the sake of explaining everything to the audience so they can nod their heads and say “oh, ok”.

For what it’s worth, the performances are good. Dave Bautista (I keep wanting to simply type out his last name because I used to cover his wrestling matches in WWE) is really good here. You buy him as a mercenary and as the soft-spoken and concerned father of Kate (Ella Purnell). Bautista and Purnell’s chemistry in this film is hugely important because, despite all the mayhem, the spine of this movie is the promise he makes to Kate to give her enough money to live a good life. The team is fun but isn’t given much chance to shine save for Dieter (Matthias Schweighöfer), a flamboyant safe-cracker who isn’t used to violence but earns his stripes when out in the field.

The last issue this film has is the complete misuse of its setting. I realize the power is out in Vegas but without the neon or gaudy malls and casinos, this movie is just like every other zombie apocalypse flick. The only time the movie ever reminds you that you’re in Vegas is when Snyder briefly shows us a room of slot machines or the Statue of Liberty replica or a wrecked Vegas skyline. That’s it. It’s frustrating.

So, yeah, Army of the Dead isn’t anything really special. The film is bloated, uneven, with sporadic bursts of fun. It’s basically Snyder’s Dawn of the Dead turned up to 11 with more of everything and only slightly better characterizations — but it doesn’t really cover any new ground. Plus, the film is already set up for an entire universe of this nonsense…and I was over this genre years ago.