WHAT IS IT?: Not content with merely polluting theaters with his pretentious, toxic cinematic horror fart, “Halloween”, Director Rob Zombie decides to pour in the rest of his bloody, white trash chemical fantasy concoction with a sequel: “Halloween II”.

THE PLOT: Just like the 1981 original, it takes place right after the end of the first one, I guess. Sort of. Zombie fakes you out with an opening mimicking the first sequel, with Laurie pushed into a hospital where, predictably, her brother shows up to finish the job he started.

But, WAIT! It’s all a dream! It’s really 2 years later and Laurie was just having a nightmare!

Yes, Zombie wastes 20-something minutes trolling the audience before deciding to go in a whole other direction. But, you know, that’s for the best because we already did “Michael Stalks Laurie in a Hospital”.

What we’re left with, however, is Rob Zombie going apeshit insane on camera.

– Michael is off in the wilderness, with a long-ass beard and even longer hair. He is having weird visions of his mom as he walks around in a giant overcoat with a hood in the middle of Bumfuck, Nowhere, murdering people in the most gruesome ways like some sort of psychotic Gandalf, which leads to his return to Haddonfield.

– Sam Loomis is a total asshole, a cocky misogynist prick, rich off the fame of the Haddonfield murders. He’s written a book about the ordeal and cares more about his wardrobe and publicity stills than he does about helping people.

WHAT DID CRITICS THINK?: They hated it, tearing it apart for being excessively gory for no reason other than for shock value and criticizing Zombie’s production choices from the 16mm film stock to the “butcher cut” of the opening hospital sequence involving Laurie and Michael.

There’s one point in this movie where an arrogant Sam Loomis appears on a talk show to discuss his new book about the Haddonfield Murders. “Weird Al” Yankovic (an odd choice to include in a film like this) is the guest appearing before him. The interviewer asks Loomis a question and Al, being facetious, takes the question instead, telling the interviewer that he “usually gets permission before doing a parody”.

I swear, this movie is self-aware.

In the original pictures, there was always some sort of emphasis on innocence and the children in the background. That’s nowhere to be seen in these films.

Once again, everything’s grimy and one could imagine that if the film was scratch-and-sniff, the movie would smell like a toilet at your local dive bar.

Oh! Yeah…there’s a stripper/dive bar in this film. One that Michael walks into and absolutely destroys. He kills the two guys running it and then murders a butt-naked stripper by beating the ever-loving shit out of her with his bare hands and the only reason he does this is because…um…his Mom…she used to work there…and, see, the stripper reminds him of his mom, so… 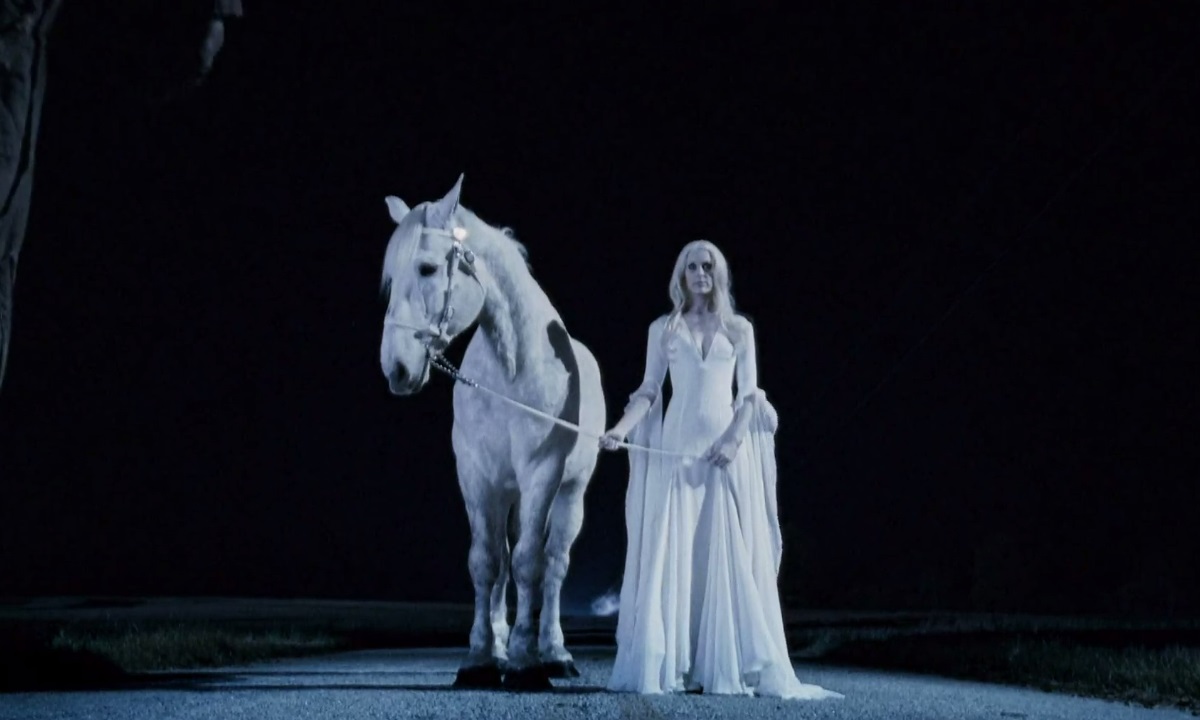 The last Zombie version of “Halloween” was violence for the sake of it. It’s the same bullshit here, only worse. The violence toward women in this film is disgusting. The jokes about women are appalling (especially the rape jokes by the paramedics at the beginning of the film). The lingering shots of nudity are just gratuitous — even when Annie bites it and Zombie INSISTS that we get to see a dead, bloody, nude Annie on the floor MULTIPLE TIMES FOR NO REASON.

Oh yeah…linger on that shot of her naked, bloody, body some more…no, REALLY, Rob…we wanna see it. All of it. Oh, yeah!

And what the FUCK happened to Sam Loomis? He’s irrelevant for 90 percent of the picture and is such an insufferable asshole the entire time — and he shows up at the end like “Remember me? I’m in this movie! I wanna talk to Michael!” And Bracket’s like “FUCK OUTTA MY CRIME SCENE AND OUR MOVIE, DUDE.”

What’s more, Michael doesn’t wear the mask half the time and a chunk of it gets torn off to the point where it feels like Rob Zombie wearing a shitty mask, acting out his sadistic, exploitative, masturbatory fantasies.

And that fucking climax and resolution — BEFORE ROB ZOMBIE DECIDES TO SHOW US STILL SHOTS OF MICHAEL’S NAKED FEMALE VICTIMS AGAIN!

I fucking HATED this film.

GRADE: F (I wish there was something lower)