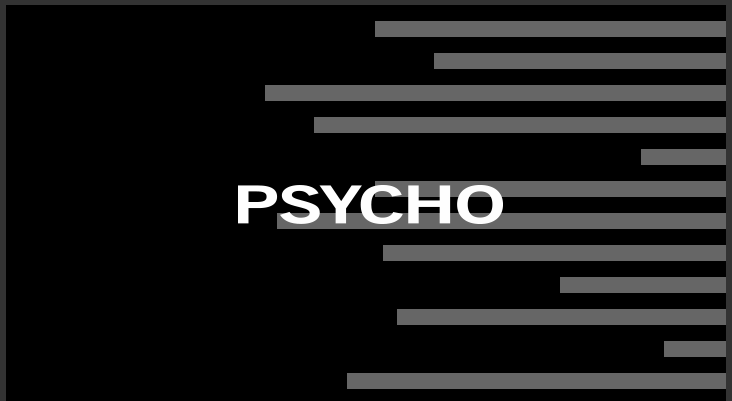 WHAT IS IT?: What words can I use to describe what a milestone this film was? Made on the cheap by legendary director Alfred Hitchcock (he utilized his TV crews and resorted to black-and-white photography), “Psycho” is STILL one of the most atmospheric, haunting, and shocking films the horror genre has ever seen. It’s one of those “Required Viewing” films for film students.

THE PLOT: The film revolves around Marion Crane (Janet Leigh, mother of Jamie Lee Curtis) who is having a love affair with a hardware store owner named Sam (John Gavin). They only meet in cheap motels when the time is right and that time together isn’t all that long. It isn’t until Marion finds herself in the possession of a client’s money ($40,000), that she decides to take the money and run with it to Sam so they can finally be free of all the secrecy and finally have a life together in the open.

During her journey, Marion leaves a bit of a social trail, which results in her fleeing to a secluded motel along a long-deserted highway, owned by the creepy Norman Bates (Anthony Perkins). It’s here where Marion realizes, much too late, that her decision to take all that money was unwise…to reveal any more would be telling.

WHAT THE CRITICS SAID: The film received mixed reviews from critics who thought that it was below what Hitchcock had shown he was capable of. Were they right? Hardly. “Psycho” was one of those films that became a classic after repeat viewings. It’s been the subject of several film studies and analysis and it’s not only considered to be one of the greatest horror films ever made, but one of the greatest films ever made, period.

WHAT I THOUGHT: I’ve seen this film countless times and I’m still amazed how much it still holds up 60 years later.

The character motivations are so simple, the twists (in story and of fate) are as cruel as they are creepy. The decision to shoot this thing in black-and-white just adds to the unsettling atmosphere the film presents. There are many very subtle metaphors at play (Janet Leigh changing from a white bra to a black bra to reflect her temporary switch from good to evil; the painting Norman takes off the wall to peep on Marion depicts a rape), the actors and actresses involved are phenomenal (That’s Jamie Lee Curtis’s mom, Janet Leigh as Marion and poor Anthony Perkins never seemed to get free of the Norman Bates character)…and, of course, there’s the infamous and legendary “shower sequence” which is cut together so skillfully and so carefully, one might think they see things that simply weren’t filmed. Everything happens so fast and is cut in second-long intervals, that your mind fills in the blanks and the scene becomes more violent than it actually is.

That’s not to say there isn’t violence to be had here, but Alfred Hitchcock was an artist and it’s obvious he was more interested in letting your imagination run wild while giving you the bare minimum: the flash of a knife, the screaming reaction of the victim of said knife, a small amount of blood…it’s pure genius leading up to an ending that, while being needlessly allowed to “breathe” in a final expository epilogue, “Psycho” still packs a punch.