DIRECTOR: David R. Ellis, who really only had this film to speak of aside from few sequel films and some straight-to-video fodder before his unfortunate death seven years later. He was mainly known for doing second unit work for larger films and never truly broke out on his own.

WHAT IS IT?: One of the first big Internet phenomenons due to the name of the film alone. The film packed theaters and was insanely successful due to word of mouth.

THE PLOT: After he witnesses the murder of a famed prosecutor in Hawaii at the hands of mob boss Eddie Kim (Byron Lawson), Sean Jones (Nathan Phillips) is rescued by FBI agent Neville Flynn (Samuel L. Jackson) and is escorted on a plane to Los Angeles in order to testify against him — but things are not that simple.

Kim knows about the plane and attempts to crash it by time-releasing a bunch of poisonous snakes which he has arranged to be included on the plane’s cargo manifest. To ensure that the snakes do their job, everyone’s Hawaiian leis are sprayed with a pheromone  which makes them highly aggressive.

With the pilots dead, and everyone’s lives in danger, Flynn has no choice but to work with who and what he has at his fingertips in order to save his witness and land everyone safely on the mainland.

WHAT DID CRITICS THINK?: It received mostly high marks from critics who thought that the film had lived up to its billing — though Peter Travers of Rolling Stone didn’t agree and called the film boring. Some critics just have bad days, I guess. 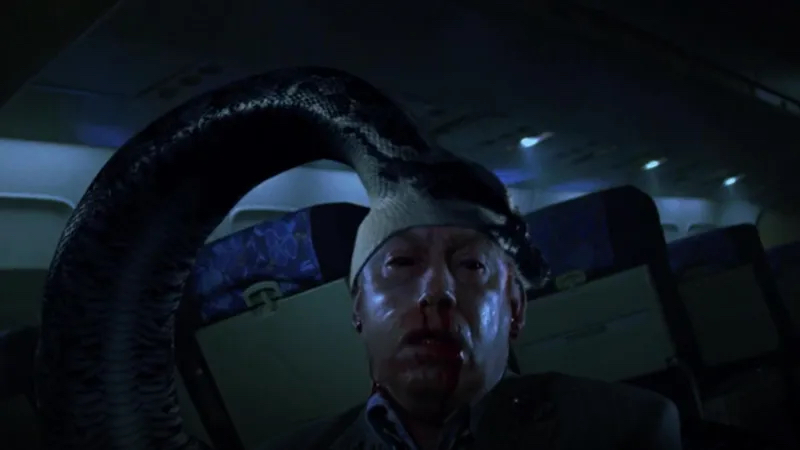 WHAT DID I THINK?: I saw this movie with a friend of mine in Reno and didn’t see again after that. I meant to revisit it. Life got in the way. 15 years later, I still love this movie.

Snakes on a Plane is a rollercoaster ride of a film. It starts with such a basic premise and then flips everything on its head.

Instead of the characters dealing with a group of armed mob guys on a plane, which would, essentially, make for Die Hard in the air, the idea to make this a man vs. nature film in the middle of the skies is just great. Even if the premise sounds a touch hokey and impossible, it still seems very possible.

The film’s pacing is reminiscent of 1994’s Speed. In that film, you had an equally preposterous premise where a mad bomber’s bomb would be triggered if the bus Keanu Reeves was in dropped below 55 miles per hour. The film’s characters all made sense and I dare say that everyone in this movie also makes sense.

Samuel L. Jackson owns the role he’s in, taking everything as seriously as possible so that you, as an audience member, believe the situation and invest yourself in it.

Anyone who is afraid of snakes might want to steer clear of a movie like this — but those who love creepy crawlies (Arachnophobia comes to mind) are going to eat this movie up. Once everyone is established and that plane takes off, you feel like you’re in the middle of the sky with everyone on that plane. It never quits until the final frame.

Once the credits roll, you feel like you can finally breathe again. I love Snakes on a Plane.