Stuff I Watch in October: The Witches of Eastwick (1987) 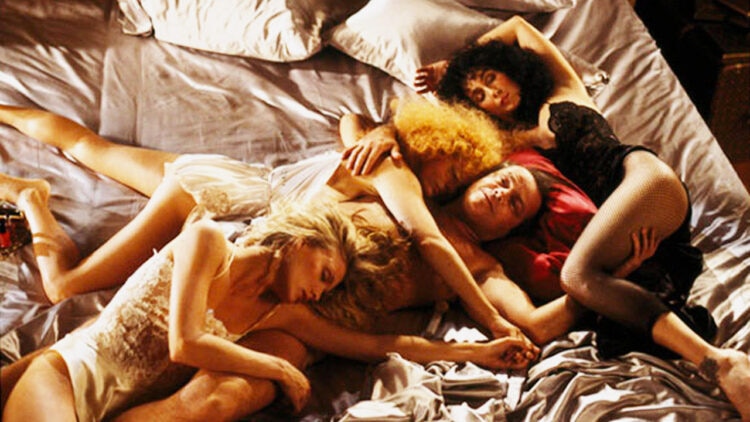 WATCHING: The Witches of Eastwick (1987)

DIRECTOR: George Miller. Yes. THAT “George Miller”. The one who directed all the Mad Max films including “Fury Road” — and it’s just as chaotic and free-wheeling as those films are, albeit, in a different way.

WHAT IS IT?: An insanely clever, satirical horror/fantasy piece which one could construe as “Feminist”. But I think that’d be a gross error.

THE PLOT: Not long after three single, dissatisfied women wish for their ideal Prince Charming to float into their lives and sweep them off their feet, a rich bachelor by the name of Darryl Van Horn (Jack Nicholson) arrives after buying a secluded mansion in town, much to the shock of the local residents and the curiosity of Alex (Cher), Jane (Susan Surandon), and Sukie (Michelle Pfeiffer).

After successfully seducing Alex, Darryl targets the other two women as well, sowing jealousy and discord among the trio of friends as well as animosity and distrust with the residents of the town who are very buttoned-down and religious. When it becomes clear that Darryl isn’t who he says he is and attempt to ditch him, Darryl attempts to exact horrific revenge on the women using demonic means — but finds out, the hard way, that he not only re-awakened their sexuality, he also awakened something within each woman which makes them as powerful as he is.

WHAT DID CRITICS THINK?: Most critics thought the film was refreshing and full of surprises — but lambasted the film for its special effects-heavy climax. Ruth Crawford famously remarked: “This film includes many fantasy elements. By far the most fantastic of them is the depiction of a single mother of five, who has to work for a living and still has plenty of time and energy left to engage in wild adventures of sex and magic. If being a witch gives you the ability to do that, quite a few women I know would be very happy to sign up at the nearest coven.”

WHAT DID I THINK?: There’s something about “The Witches of Eastwick” which makes one feel free.
It’s a film which starts out much like a modern Victorian romance and teases you with elements of the supernatural…but never quite gets there until about midway through the picture.

One moment, Darryl is mind-fucking the entire town with his mere presence, the next, he’s having sex with all three women, the next, he’s throwing an epic tantrum to the point where’s causing the women physical pain, the next, they’ve made up and they’re playing tennis — but controlling the speed and path of the ball while learning how to fly. That’s before they eat cherries and spit out the seeds which telepathically makes a townie…you know what?

I should stop there and let you see this.

Based upon the novel by John Updike and directed with deft skill by the great George Miller (the “Mad Max” series of films), the film feels chaotic and unpredictable as his other features — but that’s to its advantage. You can’t possibly see what’s coming. You only know that SOMETHING is coming — and that’s where Miller is at his best.

His direction, along with outstanding cinematography by the great Vilmos Zsigmond gives the viewer a sense of wonder and enchantment while frightening the shit out of you in the most effective way possible.

The performances in “The Witches of Eastwick” are all-around great. Jack Nicholson is better here than he was in Kubrick’s “The Shining”, playing Van Horn with devilish humor. He doesn’t mince words. He says exactly what’s on his mind, and fuck everyone who doesn’t agree with him. He will keep talking until he’s convinced you he’s right. Across from are incredible performances from Cher, Surandon and Pfeiffer who all start helpless until they realize just how much confidence they’ve had all this time.

Alex is the strongest of the three throughout the movie and Cher shines as she acts as the anchor of the entire trio. Her lunch and interaction with Darryl near the beginning of the film is just pure dynamite and a treat and I cannot see any other actors performing that scene with as much class or passion.

8 years after “Alien”, Veronica Cartwright also has a supporting role as a religious nut who suspects that Darryl is evil personified — and pays a very dear price. She’s brilliant here, putting every bit of angry, paranoid energy into her performance that you almost become convinced that she’s actually possessed by something not of this earth.

But one of the greatest things about this film is that it’s still relevant today.

There’s a message here, hidden a bit underneath the special effects and climatic pyrotechnics, about the immature and unwelcome behavior of some men. The female leads are all women who have been burned or taken advantage of in some way. Even when Darryl rages and shows his true form, all you see is an angry little boy under his ghoulish form.

“The Witches of Eastwick” is a piece which, while I wouldn’t call it completely Feminist, is most definitely one which empowers women.

In fact, had the film been made today, it would have REALLY rustled the jimmies of a certain demographic of men.