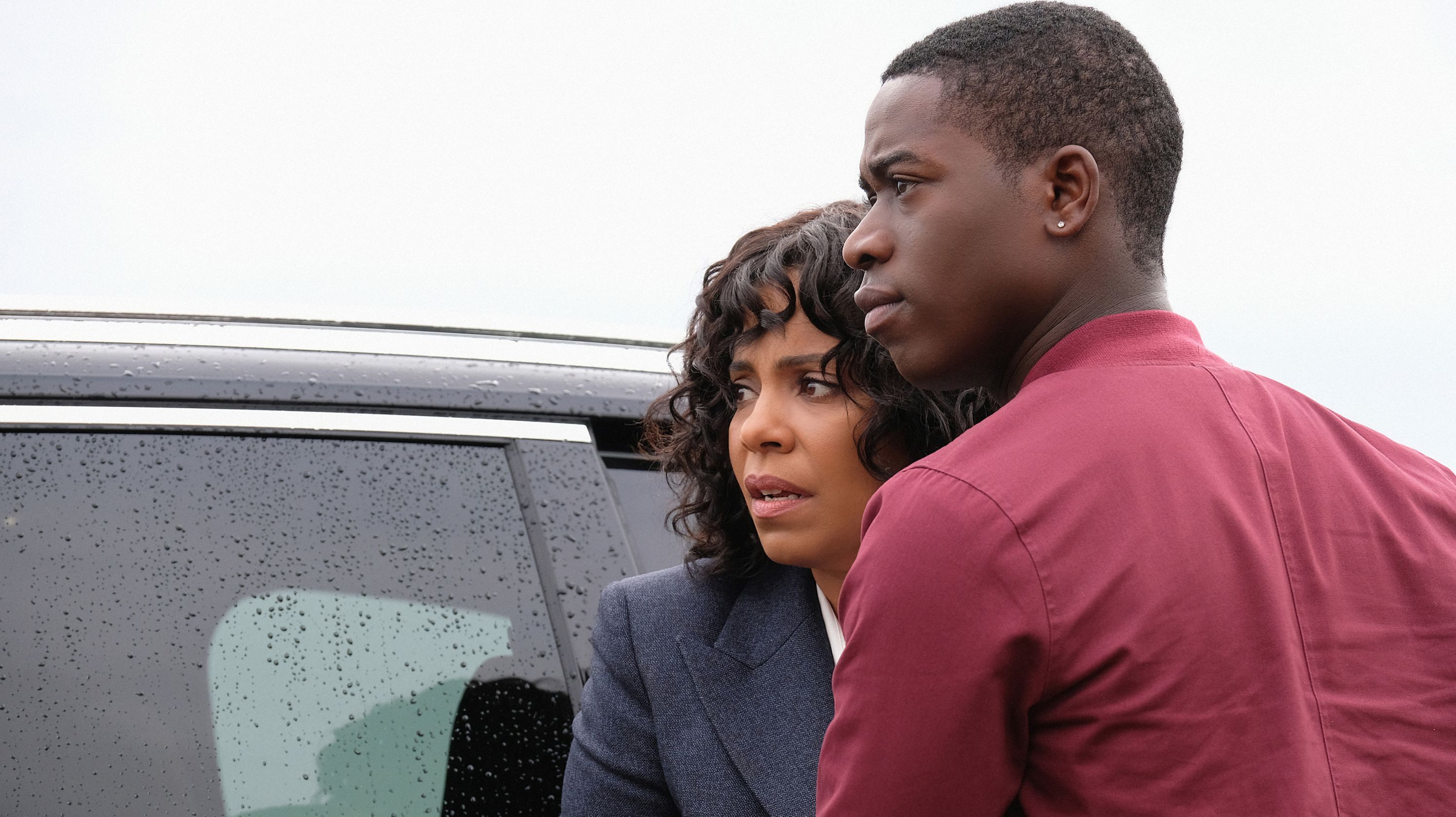 In 1959, Rod Serling gave us “The Monsters Are Due on Maple Street”, a tale of deep-rooted prejudices, fears and suspicions exposed in the face of the unknown and misunderstood which inexorably escalate and eventually spiral into horrific violence. “The tools of conquest do not necessarily come with bombs and explosions and fallout,” Serling said to his television audience, leaving them with a final warning about the dangers of unleashed virulent hatred: “There are weapons that are simply thoughts, attitudes, prejudices – to be found only in the minds of men. For the record, prejudices can kill – and suspicion can destroy – and a thoughtless frightened search for a scapegoat has a fallout all of its own – for the children – and the children yet unborn. And the pity of it is – that these things cannot be confined – to the Twilight Zone.”

Fast forward several decades later. “Black Lives Matter” had rooted itself deep within the American socio-political picture, taking center stage in the discussion of modern race relations in the United States. The reactions I witnessed from (mostly) Conservative white people ranged from dismissive eye-rolling to pure outrage. Rather than taking a breath and attempting to understand how people of color felt about the exposure of an uptick in police violence toward black people and concerns about systemic racism, we got defensive memes-turned-movements in “Blue Lives Matter” and “All Lives Matter” which, while they mean well, are fairly ridiculous in their attempt to be “inclusive”: one cannot counter “Black Lives Matter” with “All Lives Matter”, while also saying “Blue Lives Matter”, lest one logically has an issue with the word “black”.

We may be 60 years into the future but Serling’s haunting soliloquy is no less potent. They may be forever prophetic.

“Replay” is the story of Nina Harrison (Sanaa Lathan) a proud mother on a road trip with her son Dorian (Damson Idris) to a prestigious black college where Dorian’s been accepted. This is a big moment for Nina, an extension of family and racial success and she’s ready to record the entire trip on an aged video camcorder so she can play it back for the grand-daughter she facetiously says Dorian will eventually have in his life. Things get weird for Nina, however, when she discovers that her camcorder has the ability to not only rewind the tape inside of it, but also time itself. This comes in handy when Dorian accidentally spills ketchup on his shirt — but it pays massive dividends once the two run into the sinister Officer Lasky (Glenn Fleshler) who seems adamant about causing problems for the Harrisons simply because he feels the badge on his chest entitles him to do so. 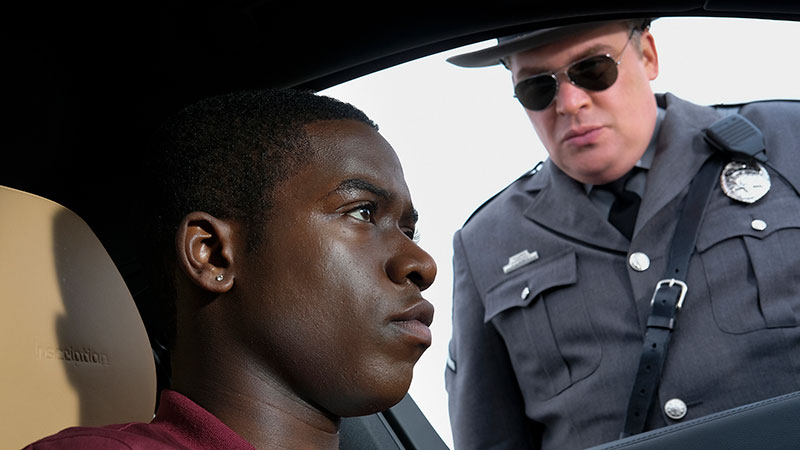 So, when Dorian rebels against Lasky and refuses to comply with the officer’s orders to shut off his Mom’s camcorder while being stopped for speeding, things get out of hand fast, leaving Nina no choice but to use the rewind button to avoid a seemingly inevitable tragic ending. But what good is a “rewind” button when something might actually be inevitable? What if you couldn’t escape something that’s fated to occur? Such an idea has been explored before with films like “12:01” and “Groundhog Day”, but “Replay” isn’t about saving a crush or bettering yourself to escape the time loop you’re stuck in. “Replay” is a taut, well-executed parable, an extremely clever examination of racial tensions presented in such a way that it feels just as frightening as anything you’ve ever seen on any episode of The Twilight Zone.

The episode has the benefit of a tightly-written script which provides us with an environment that is both familiar and surreal at the same time and a flawless cast who inhabit their roles without being overwrought or excessively contrived. Whereas a viewer might see a town with clear paths and roads that would move Nina and Dorian out of danger, one also gets the feeling that if the camera panned out, we’d instead see a giant labyrinth with no discernible escape even if the prize they seek is achingly close. Sanaa Lathan plays Nina as someone any mother can identify with, somebody driven and unselfish. One of the benefits of going back in time is that you’ve already seen the future, so you’d know what to expect if you had another chance to go through everything again and you’d be able to act accordingly. Here, Nina and Dorian watch as a local station reveals the winning state lottery numbers. Nina rewinds time and tells Dorian that she can “guess the numbers” as part of a bet she makes with him.

Beyond that bet, Nina does nothing further with that information or the idea that she could make herself rich with the abilities she has. Like Dorian, there are no excuses in her family. Everything she has, she has earned, something she points out to  Officer Lasky when he questions her about who actually owns the vehicle she drives. Lasky is played beautifully by Glenn Fleshler who most people might remember as the psychotic Errol Childress in HBO’s “True Detective”. Here, Fleshler plays Lasky as an unstoppable monster, hiding around arbitrary corners of that aforementioned metaphorical labyrinth which envelopes the Harrison Family. There’s a sense that there’s no escape from his wrath, no matter which direction Nina or Dorian attempt to travel. Every single time you see him along with Nina’s eyes going wide with fear, you tense up and brace for some sort of detrimental impact.

The ultimate take-home, of course, is that there really isn’t an escape. This danger will always exist unless a change is made on the part of the people who live in fear of people of color.

After two introductory episodes involving a comedian with magic powers and a hokey, disappointing remake of a classic episode, “Replay” is a welcome return to what Rod Serling gave us all those decades ago: an unfortunately necessary and relevant allegory of modern race relations and the dangers people of color face on a daily basis. The only area where it slightly falters is the climax (see below) where Nina defeats the monster — at least for the time being. Her declaration that Lasky and his troops “are the ones living in fear” really didn’t need to be said. The dozens of black people holding cameras in their faces while Lasky’s back-up looked frightened drove that message home. This reason this episode gets away with this as opposed to, say, the ending of “The Comedian” is because the final twist that follows wrecks you while simultaneously reminding viewers that until meaningful change comes, the struggle is nigh-eternal.

Serling would have been proud.