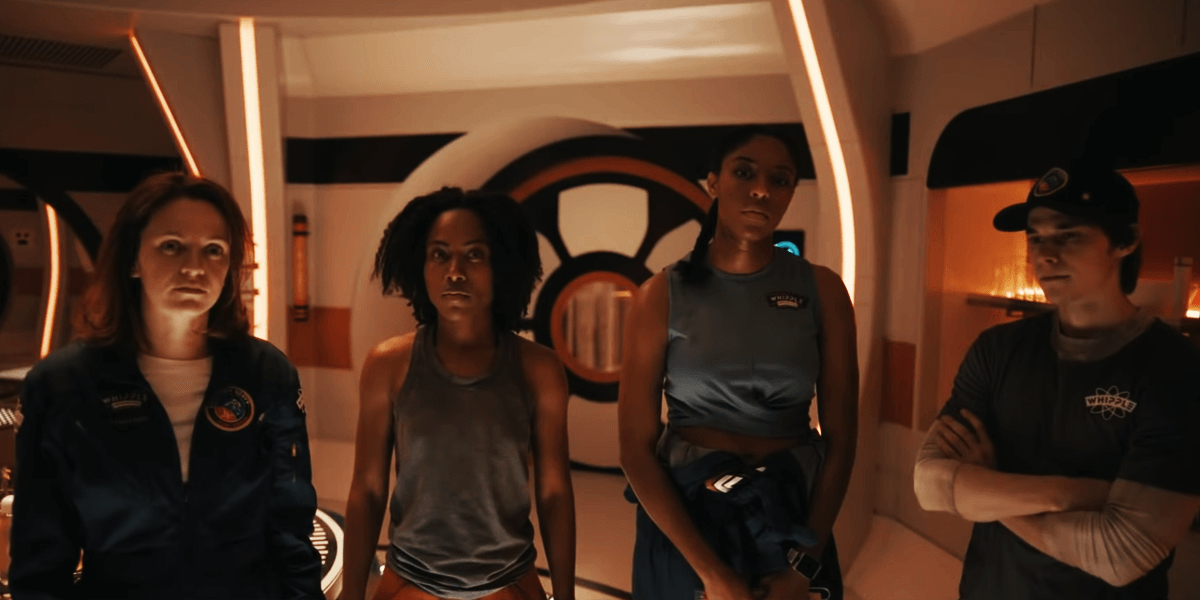 Because Earth is on the brink of socio-political and geological disaster, America’s on a mission to Mars in “Six Degrees of Freedom”, the sixth episode of CBS’s latest reboot of “The Twilight Zone”. The crew is hyped up and, like any disciplined space crew does, blasts the song “Family” by The Interrupters while waiting for launch. That’s when they get some troubling news: North Korea and Russia have seemingly joined forces and have arbitrarily launched nukes at the United States — and America’s sent about 10 times the firepower in return, so all’s well that ends well! An inspiring episode of Star Trek, this is not, not that it’s meant to be. The crew’s watchers on the ground have ordered the launch be scrapped and that everyone “evacuate” immediately — but the crew, headed by Alexa Brant (Wanda DeWise), makes a decision, indicative of a good family: take off, leave Earth and see if the mission to Mars ends up becoming their salvation.

From here, we learn that it’s gonna take nearly a year to reach Mars and that the crew can survive in space for about a few years beyond that. What does the crew do to pass the time? At first, they hope against hope, attempting to make contact with someone, anyone, on planet Earth. The phone systems are still up, so that means human beings survived, right? Not so, says Jerry, their Mission Specialist (Jefferson White). The type of nukes used were designed to incinerate humans but leave infrastructure mostly undamaged. Further phone calls are not allowed, per Brant, because the crew must accept that human and most other life on Earth has perished. With months left in their travels, the crew continues with life as usual, exercising, keeping house, taking notes and having the occasional sexual tryst, something Brant gives Ray and Casey, her engineer and pilot, respectively, hell for: there cannot be new life on board the ship because that would mean a shorter survival time for the crew. 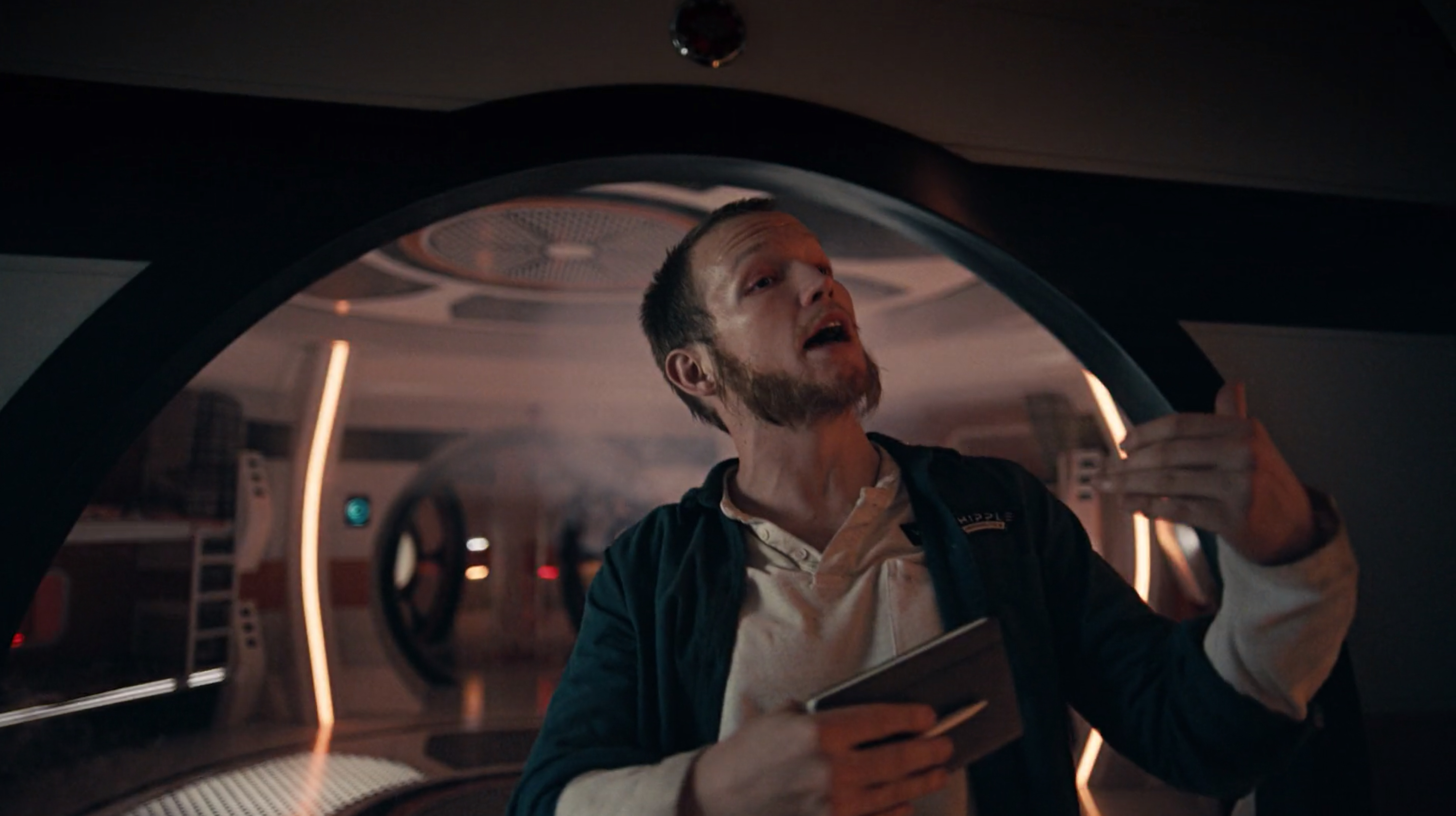 As the landing date gets closer, the crew discusses music and scientific theory and while Brant’s “family” seems to be getting stronger despite overwhelming death and destruction on their home planet, it starts to become clear that Jerry’s not ok. Starting to develop a look reminiscent of somebody who’s been through the wringer, he records random notes and mathematical equations in a small black book, something that all comes to a head when a solar flare erupts and heads for the ship, threatening all life on the Good Ship Bradbury — but Jerry doesn’t believe it. While everyone else races to their posts in an attempt to avert certain death, Jerry does nothing and attempts to break down his reasoning for being apathetic in short bullet points: the chances of an attack from North Korea are next to impossible, the toilet system on the ship didn’t have crystallization in the rim via the cleaning system, and his Stylus pen was floating at one point, which it shouldn’t have been doing. Add that to the strange humanoid image he saw coming from a touchpad aboard the ship and you have a simulation designed to test stress levels in extreme environments. In other words, none of what the crew is going through is actually happening — and they’re being watched by the people testing them.

But is that true? Or has Jerry lost his mind? Doesn’t matter, because there he goes, toward the airlock, to prove this is all a farce…

After five episodes giving us comedians, mp3 players and cameras with supernatural powers, aliens in jail cells, and children running the country, “The Twilight Zone” provides us with some good, hard science fiction, which is most welcome for a show that often saw its past protagonists journeying into space and beyond. Almost nothing feels cheap here. The special effects, atmosphere and performances sell the hell out of the episode which, right out of the gate, puts us right in the middle of things. The launch scene hooks you right off the bat, establishing Brant and her crew as close-knit, which is immediately challenged once it’s revealed that the country is under attack. Engines roar, tensions rise between the astronauts — yet Brant’s “family” is still able to make the difficult decision of leaving the planet together. The characters’ needs and wants are beautifully established and just about every action that takes place is based on real motivation as wrong-headed or sleazy as certain actions might turn out to be. But the main highlight of the episode is Jerry’s breakdown as the solar flare threatens to kill everyone on-board, providing us with a ship that’s about to go to hell, sparking and shaking and coming apart, which mirrors Jerry’s mental state as he rants about probability and theory. It’s an amazing scene. 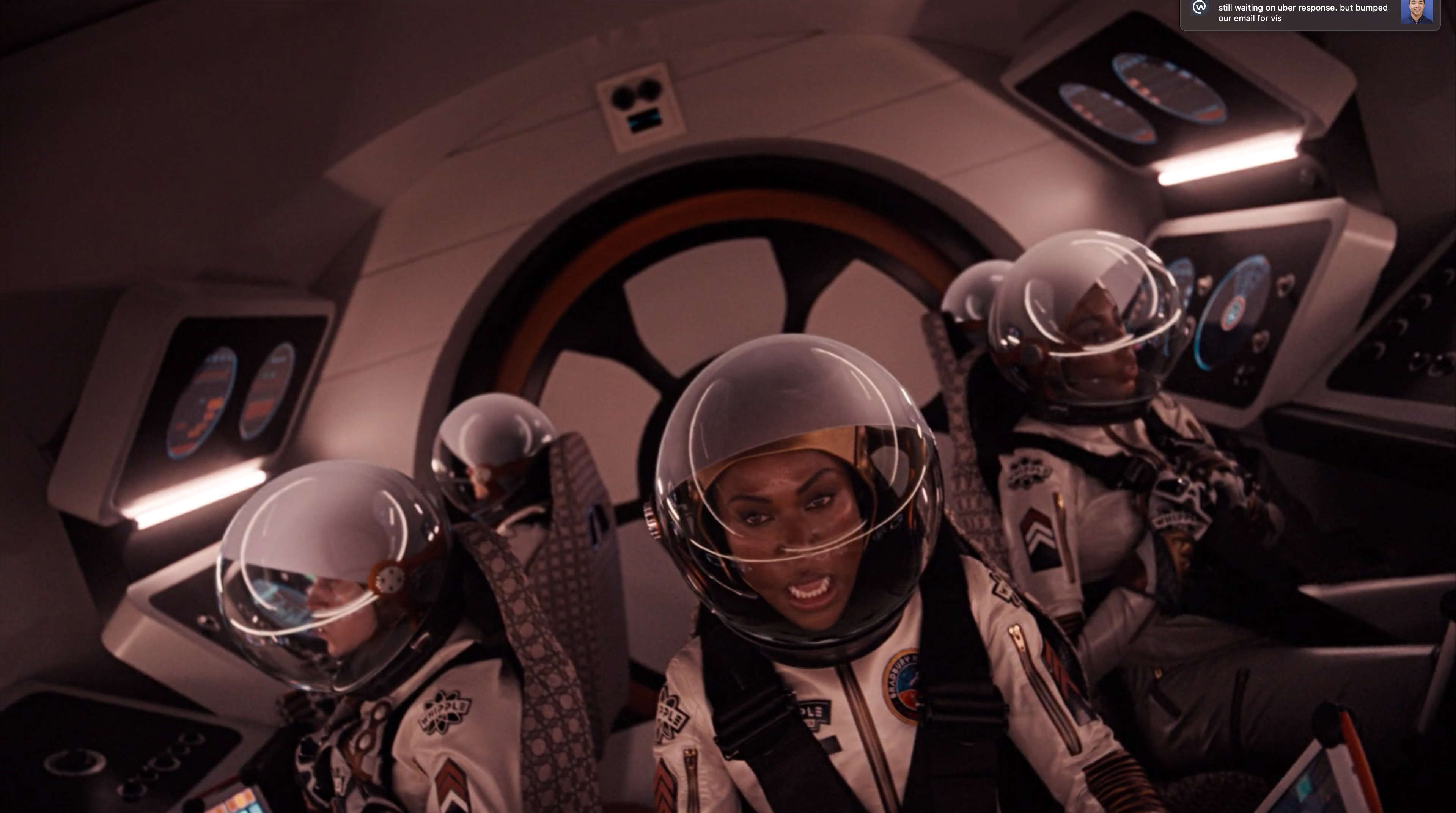 But while the episode appears to be headed for greatness, such a goal turns out to be illusory, suffering from the the writers’ insistence on filling most of a near hour-long running time (clocking in at just over 50 minutes long, (one of this show’s biggest weaknesses) as scribes Heather Anne Campbell and Glen Morgan give us characters who pontificate endlessly in the most self-aware manner, doing the disservice of figuratively screaming “THERE WILL BE A TWIST ENDING”. It’s so heavy at times, it takes you right out of the episode and feels like you’ve just crossed over into a social media page where armchair analysts and fans spend their time discussing popular theories and guessing endings for their favorite television shows. One of the most aggravating things about the episode is the final twist (discussed in “LOST IN THE ZONE”). Instead of being an original thought which runs contrary to what we’ve been hearing for an hour, it’s an amalgam of every character’s ideas. Furthermore, it’s somewhat vague to boot, besides the moral which rips off a classic episode I’m sick to death of mentioning every other week.

“Six Degrees of Freedom” isn’t a complete waste of time. It tells a good story (with some great intensity and fantastic visuals, recalling great science fiction such as “Alien”, “Solaris” and “2001: a space odyssey”), but it feels like a retread of better science fiction and this show has done so much better.