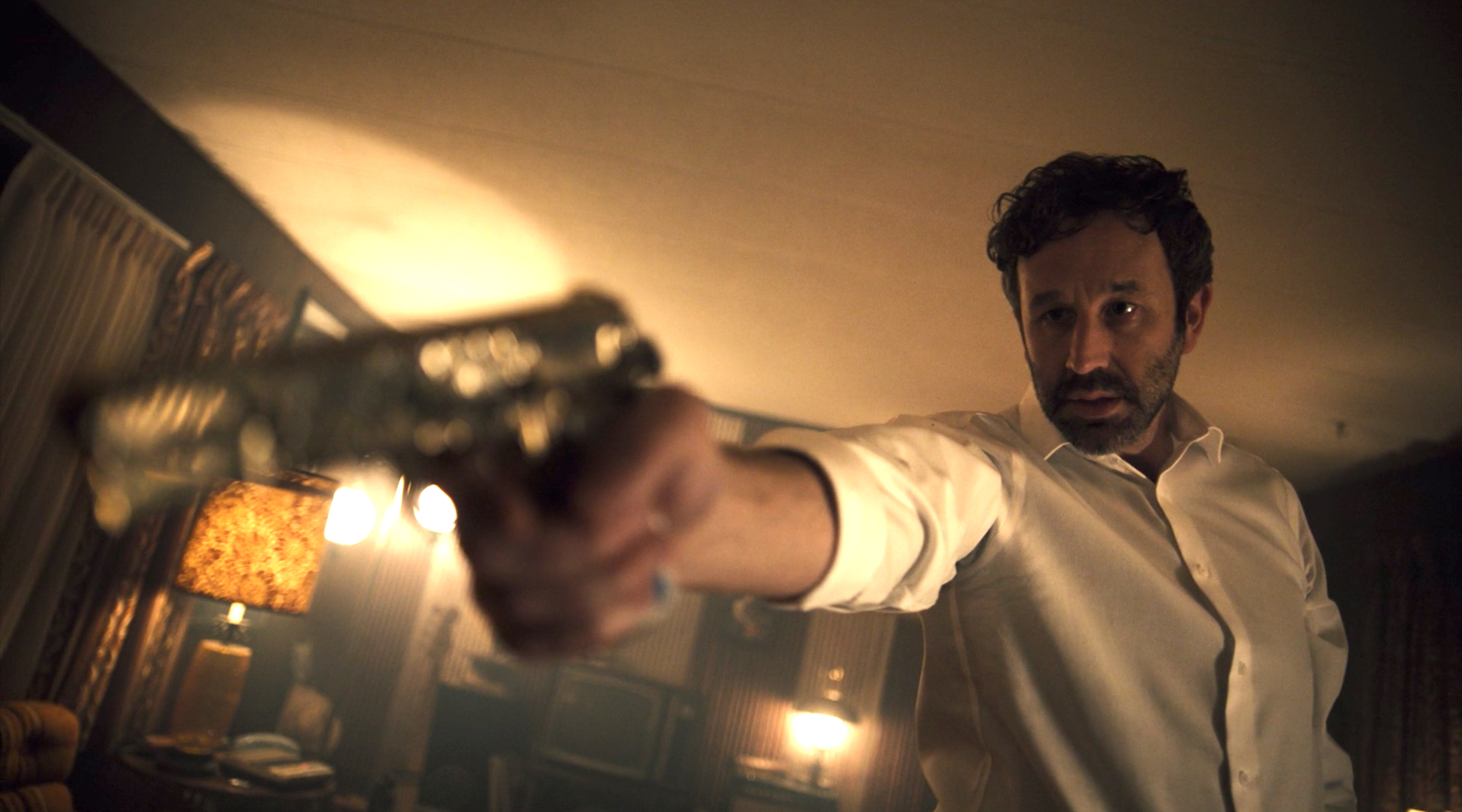 Back in college, I had dorm mates who were, shall I say, more “adventurous” than I. While I spent the weekend relaxing or hitting the downtown area to visit various shops or just spend time with my girlfriend, they would take frequent trips to Los Angeles and San Diego and go club hopping and drinking. One weekend, in particular, they took a trip to Tijuana for their usual shenanigans. When my roommate returned, he showed me his new acquisition: a simple silver switchblade with what aappeared to be a handle with blue marble embedded in it and a gold dragon embedded in the marble. My reaction was one of kind acquiescence: “That’s pretty cool”. But I wasn’t impressed. Then he showed me how to do the quick flip move to open the blade for use. He was taught by our neighbor who encouraged him to buy the thing. And he passed on that skill to me. I was happy to learn it and master it as one would be happy to learn anything new, but I wasn’t about to go out, armed with a switchblade or carry one around arbitrarily…but it sat there, on his desk, this beautiful knife, and it just “called” to me to pick it up and play with it which, I’m ashamed to admit, I did. I didn’t hurt myself or others nor did I want to. It was something akin to the modern day fidget spinner. It was satisfying to play with the thing.

These days, I don’t own any sort of weapon. I’m still not one who believes in the use of small arms like the aforementioned switchblade, or guns for that matter, nor have I ever had the urge to go out and get one for myself — but aside from the incredible amount of respect they command, I fully understand the seductive allure of handheld weapons. There’s just something about them that entices one to pick one up, most likely because of the power one may possess when they hold one in their hands.

Such is the case with this week’s “Twilight Zone” protagonist, Jeff Stork (Chris O’Dowd), a college professor living with his father after a break with his wife, Anne (Amy Landecker). As Jeff begs his wife, over the phone, to accompany him to a marriage counseling session in an effort to save their marriage, he comes home to find his dad dead from an apparent gun-related suicide, something that makes as much sense to him as the suicide note he left behind that reads “I LOVE HIM MORE THAN YOU”. Jeff’s father was a hippie, he explains to the cops, and he hated guns. So what was he doing with a beautiful gold-plated pistol with a blue scorpion etched into the pearl grip? What’s more, the spent round had his father’s name on it. I say “had” because the name vanishes from the round shortly after Jeff discovers his father’s body. And what’s worse, Jeff soon discovers a safe in his father’s room, lined in seductive red padding reminiscent of a high end VIP room at a strip club, containing a black, heart-shaped box. In the box? A matching gun clip and one round…with Jeff’s name on it. 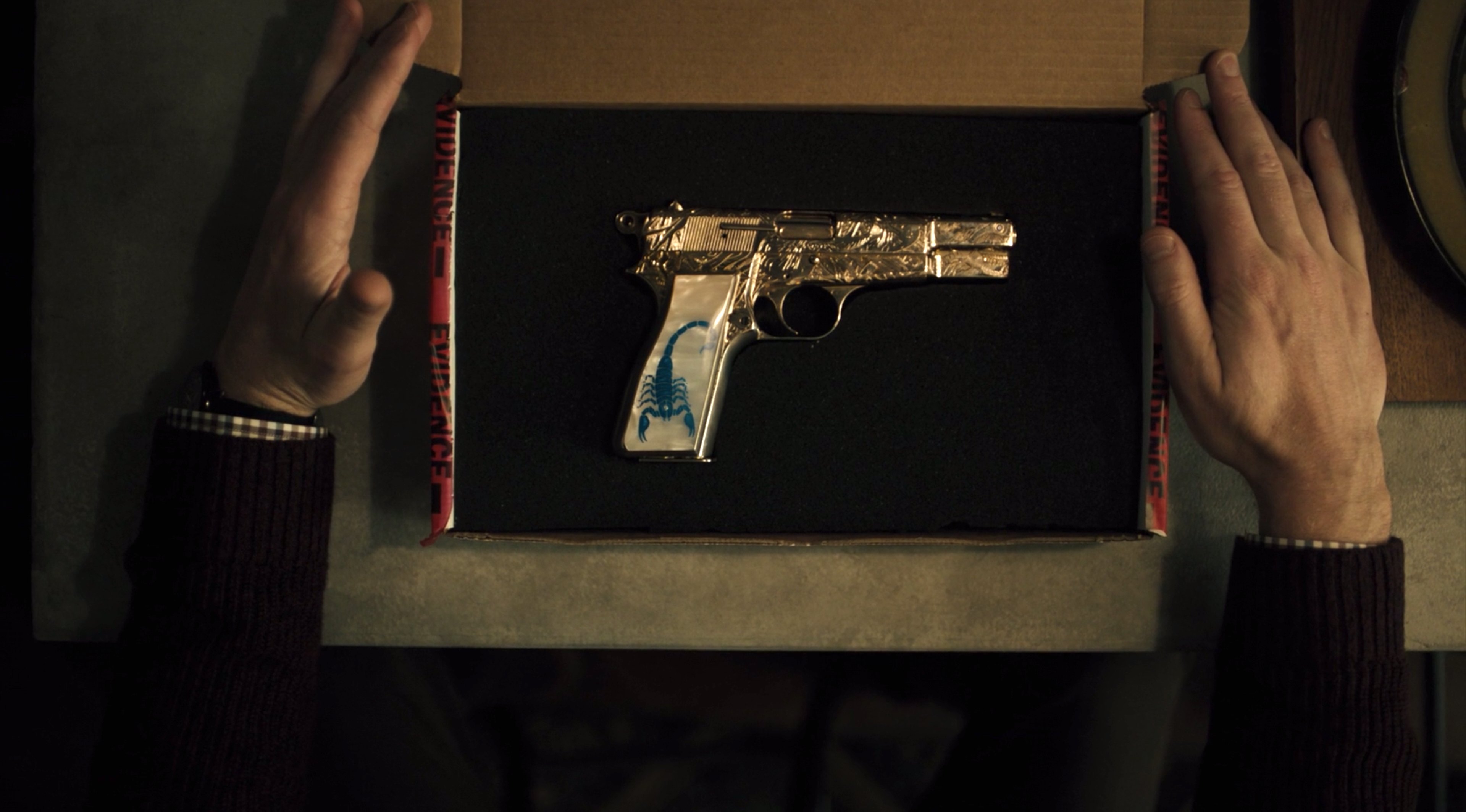 “The Blue Scorpion” is the penultimate episode of the first season of “The Twilight Zone” reboot and it’s a welcome addition to a series that has come frustratingly close to being a truly great show. Written by veteran X-Files scribe (and recurring writer on this show), Glen Morgan, the episode finds Jeff struggling to come to grips with his father’s tragic death while falling victim to the same spell or curse the gun carries with it. The gun, it’s explained, was made in Cuba in the 50’s and is so elusive, it’s considered by gun aficionados to only be a myth. According to the legend, it’s only been in the hands of about a half dozen people and that’s mainly because “You don’t find it, it finds you.” Of course, Jeff could just take the easy way out and sell the thing but he’s not a selfish man, he’s just attached to the things his father and just like he can’t let go of his father’s prized bass guitar or any of his concert memorabilia, he has no desire to profit from his death.

Regardless, his attempts to sell the thing, for lack of a better term, backfire, when the gun goes off by itself while it sits on the counter in front of him. That $50,000 offer from the gun guy he was speaking with over the phone suddenly looks like mere pennies to Jeff who not only begins hearing and seeing the name “Jeff” everywhere, he begins handling the gun, examining it, cocking it, the entire sequence of events not unlike foreplay before the big event which, here, sees Jeff finally firing round after round from the gun at a shooting range. He even cradles the gun like a lover while he relaxes, whispering to it that he knows it will never hurt him. In Jeff’s eyes, Anne has become his enemy. On top of attempting to take what’s his in the divorce (she’s shunned any sort of reconciliation), she’s also dating somebody else…who is also named “Jeff”. And, suddenly, that last round in the Scorpion’s chamber with Jeff’s name on it makes so much sense…but will Jeff succumb to his darker urges and pull the trigger or will he resist his new found urges? 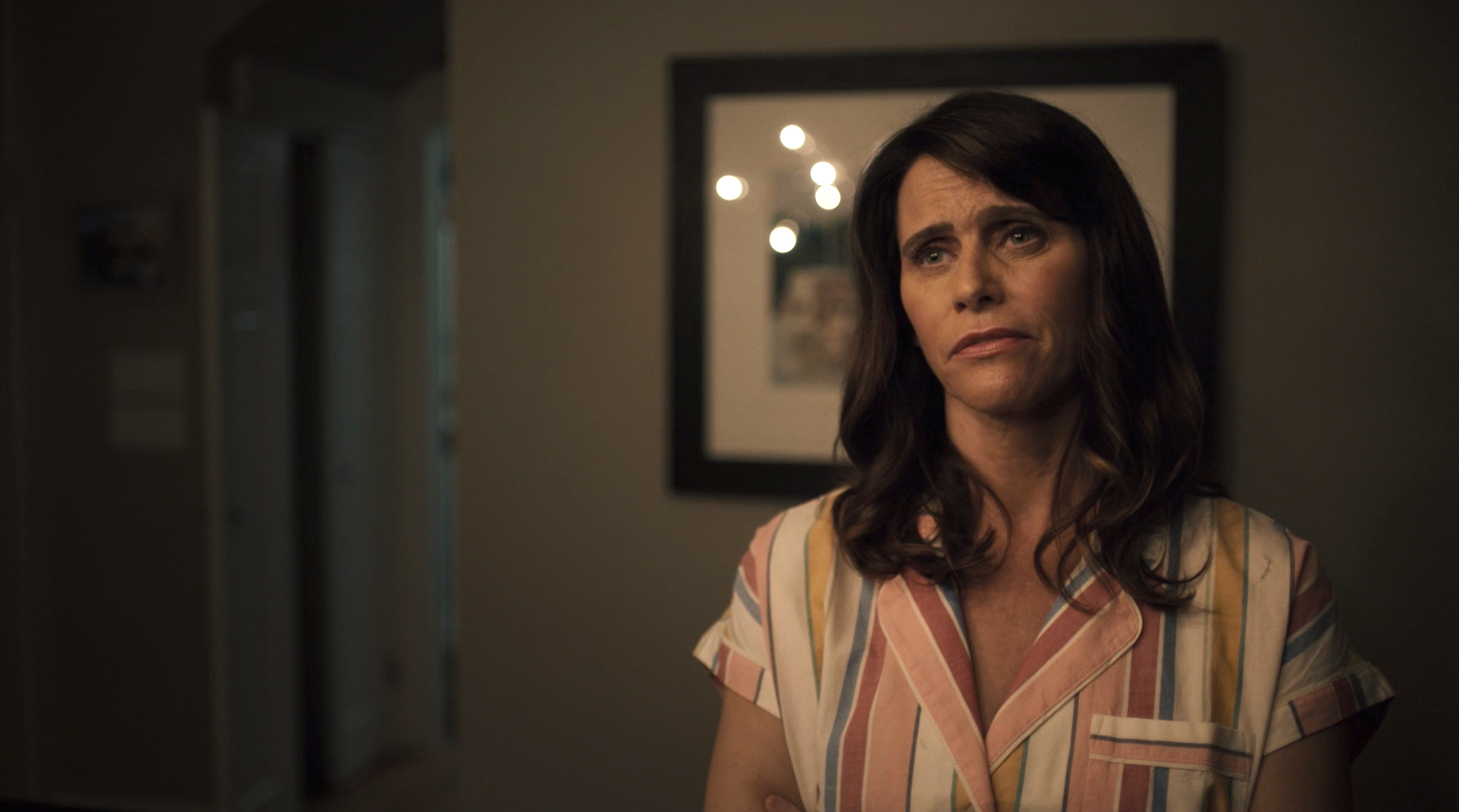 I’ve said, several times, that this series hinges on execution and “The Blue Scorpion” has that in spades. From the pseudo-detective novel title to the fitting noir/mystery atmosphere to the performances of everyone involved to the great 60’s soundtrack(!), the show mostly runs on all cylinders. This is also due, in large part, to a slightly tighter run time (just over 40 minutes) and the storytelling and characterizations. Even the twist at the end sticks the landing (discussed in the notes below), though the smaller twist at the lake feels tacked on. With that said, the episode isn’t without its flaws. While the myth of The Blue Scorpion is clever, it feels odd that a gun shop owner would practically be reading the gun’s Wikipedia bio to a random customer over the phone, much less instructing him on how to properly ship the gun according to the weapon’s superstitious lore (it’s “afraid of the dark” so you have to “poke a hole in the box”…c’mon). Also, I know that Jeff has a penchant for using mind-altering drugs but hallucinating to the point where he actually sees the gun’s designer/manufacturer standing in his bedroom (with the gun suddenly sitting on the bed after Jeff had stored it for the night), talking about how great the gun is, is a bit much. Simply seeing the gun sitting on the bed would have been more effective by itself, I think, because it would have added to the gun’s established mythology and it would have sparked a debate about whether Jeff was really seeing it there or if he was under the influence of the drugs he was on.

However, those points don’t do anything to sink an otherwise fantastic episode. In fact, it might actually be the first episode of the new series to convey a fairly clear message but without the bluntness seen in just about every other episode before it. Yes, it does attempt to add its own verse to the overwhelmingly complex debate about guns in America, examining our need, not necessarily for guns, but for any arbitrary object in our life which we might hold dear to our hearts. Are we attached to something because we need it or do we hold on to these things because we believe we need them? And while it does satirize the obsession Americans have with guns, it doesn’t insult its audience, choosing to make its statement in a more subtle manner, while also striking a surprisingly upbeat tone with its main twist which might, hopefully, resonate with both sides of the never-ending debate.

Next to “Replay”, “The Blue Scorpion” is one of the best episodes of the new series.

2019-05-23
Previous Post: ‘Cobra Kai’ review: ‘All In’
Next Post: AEW Double Or Nothing: A Thousand Mile Journey Begins With A Single Show